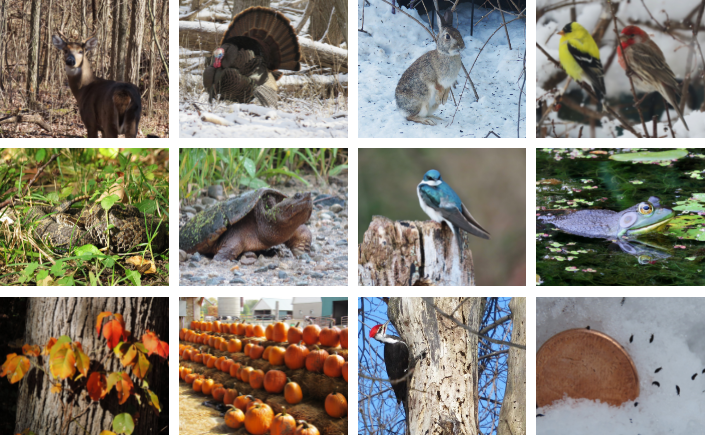 On New Year’s morning, I usually meander down to my marsh in the dawn’s early light. It just feels like the right thing to do. Crows announce my approach as cattail stalks rattle in the winds. I often see a buck that bed downs between the woodlands and the cattails, and he sometimes all but poses for a photo. He snorts at my approach and is gone. If my approach is exceedingly stealthy, and the wind is in my favor, every once in a while I have a fleeting glimpse of a coyote that shares my habitat and frequents the marshy area. I take satisfaction in knowing that even when I do not see a coyote, one may have seen me. I am good neighbors with my wildlife.

This is the season Tom Turkeys proudly gobble and strut their stuff, Barred Owls carry on extended conversations, and Chickadees chatter incessantly.

Eastern Bluebirds fluff their feathers against biting winds, and Great Horned Owls are on their nests. Red squirrels explode into activity, fuzzy catkins form on pussy willow twigs, minks mate and Punxsutawney Phil and all his groundhog kin look for their shadows. Of course I look for my favorite harbinger of spring, and it is not the Robin; it’s skunk cabbage. Did you know skunk cabbage actually creates heat to push through frozen earth and thin layers of ice?

With nights below freezing and daytime temperatures above freezing, it’s time for the annual tradition of tapping maple trees followed by the sweet aroma of boiling sap as it transforms into syrup. Bald Eagles at Stony Creek Metropark are incubating their eggs. Red-tailed Hawks soar gracefully over my meadow. Prolific rabbits hop about my meadow, nibbling blissfully on vegetation, unaware of the airborne fate that may await them.

I look to the early days of April as the real end of winter, but the transition is subtle, and nature may change her mind, as the Goldfinch and House Finch pictured below discovered a few years ago in the second week of April. Rain soaks the earth, awaking long slumbering wildflowers and stirring spring peepers into endless chorus of song. Daffodils pop open overnight and nod their bright yellow heads in restless winds. Great Blue Herons and Egrets hunt for frogs in our wetlands. Chipmunks appear everywhere. Does are heavy with fawns and looking for places to give birth. If the day is warm and sunny, I will shed my coat and sit on a glacial boulder along my trail and just breathe the scent of spring.

April showers really do bring May flowers with mayapple and trillium leading the pack of woodland beauties. Don’t forget morel mushrooms, perhaps the best known wild mushrooms of the midwest. Honeybees are abuzz searching for pollen and nectar, northern water snakes bask on floating logs, and the occasional sighting of an Eastern Massasauga Rattlesnake, an event often dramatized by media reports, brings the annual question: does Oakland County really have rattlesnakes? Yes we do! I feel fortunate to have photographed them twice in our area.

It’s summertime! Wetlands and woodlands are teeming with wildlife activity and the sweet scents of the season. Beavers are adding to their lodges for the expanding families, baby Wood Ducks are hatching and making their first great leap from tree trunk nests down to the water, dragonflies are everywhere, and stunningly beautiful lady’s slippers are blooming in our healthy woodlands. It’s also the end of the egg-laying season for snapping turtles; perhaps you will see one lumbering ashore. Don’t pick it up!

The heat of the summer is on. Tree swallows swoop low over our numerous lakes. Fireflies flicker all night. Thunder rumbles. Bats patrol the sky at dusk. I search for endless excuses to have more hours outside and I find them. The trails of Independence Oaks County Park, Seven Lakes State Park, Ortonville State Recreation Area and the Bald Mountain State Recreation lure me at sunrise.

The raspy buzz of cicadas adds to nature’s music on sultry summer afternoons. Bullfrogs sound off from marshes with their deep jug-of-rum territorial song. Great Blue Herons stalk the shallows of our wetlands in search of frogs and small fish.  Bald-faced hornet nests sway from tree branches. Hornets ignore people unless harassed, but mosquitos feast on runners and hikers.

The pace of nature quickens as hours of daylight shorten. It’s the season of falling leaves and fading sunlight. Waterfowl gathers in flocks. The night melodies of insects has ended. Pumpkins and colorful gourds appear at our farmers markets. Goldfinch tear at purple cone flowers and sometimes seem to “hang out” with Purple Finches. Screech owls sing to the night and the moon appears magical—at least to me.

Frosty mornings invigorate me. Bucks are in rut and roam our woodlands. Screech owls sound off in our woodlands. . Chickadees tear at the empty nests of bald-faced hornets to feast on larvae that failed to emerge. Downy woodpeckers peck at suet feeders as mighty Pileated Woodpeckers pound on dead tree trunks. Flocks of wild turkeys scratch about under the leaves for hibernating insects and seeds.

I am reminded once again that the dead of winter is an oxymoron, because it’s only dead to those who don’t embrace its wonders or seek out its hidden mysteries. I hope for a sighting of a magnificent snowy owl, a cold weather warrior of the world of winter birds that on rare occasions appears in our area. If I don’t see one, and rarely do, I will happily settle to watch thousands of tiny snow fleas, also known as springtails, that leap about near the base of tree trunks on sunny winter days.

Nature adventures are best when shared, and I look forward to winter wonders with my nature adventuring partner, who spots snow fleas before I do on the wilder side of Oakland County.