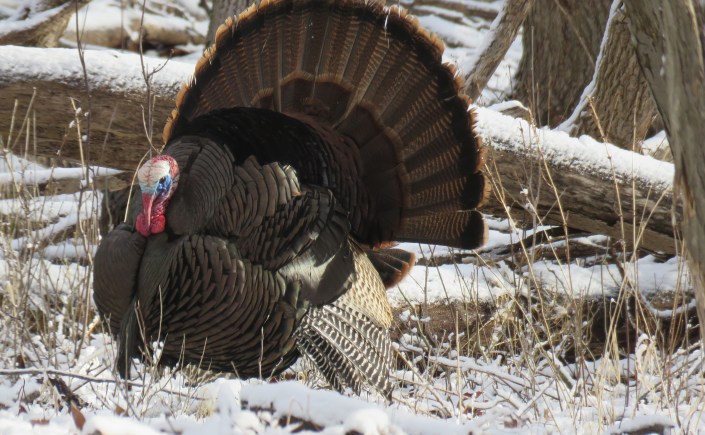 Thanksgiving feasts of golden roasted turkey, cornbread stuffing, and tangy cranberry sauce, accompanied by alluring arrays of delectable garnishments and mouth-watering pumpkin pie await. It’s a beautiful looking meal. About the only thing more eye-catching than a ready-to-be-carved Thanksgiving turkey, is a Wild Tom Turkey strutting his stuff in the woods of Oakland County.

Wild Turkeys are strikingly handsome creatures, unlike their farm-fed, white-feathered, and plump kin that are about to adorn Thanksgiving platters. Wild Turkeys have feathers with iridescent shades of bronze, copper, gold, and green, along with distinctive blackish-brown tail feathers and white and black bars on their wings.

When spring arrives, and a tom – that’s the male turkey – struts and spreads his chestnut-brown tipped tail feathers to show off to his flock, his flamboyant head actually changes colors and may be scarlet-red, magenta, or even vibrant shades of deep-ocean blue.

The female turkeys, known as hens, are considerably smaller and far less colorful. That makes them much less conspicuous when trekking about a woodland, or perhaps your yard. Their dullish-brown color blends well with forest environments, a coloration that’s critical when sitting on a ground nest in the spring trying to stay hidden.

But when a tom, and his flock of a dozen or more hens are seen together on an early spring day when snow still adorns our woodlands, it’s a sight to behold.

A very small percentage of our turkeys have a much blander, atypical appearance than the extremely colorful males. Two years have slipped by since my first and only encounter with a “smokey-gray” turkey that wandered about my field, leaving me more than a little confused as I admired its striking pale gray feathers with blackish tips. I thought for a moment, perhaps it was the offspring of a Wild Turkey that had secretly made friends with a domestic turkey at a farm about a half mile from me.

At the time, I contacted our local Michigan Department of Natural Resources office for more information and included photos. Their reply held the answer:

For more information on smokey-gray turkeys, read this article from Audubon.

Wild Turkeys in Oakland County change their diets at winter’s approach, like all turkeys do based on the season and availability of food. They are habitat generalists, which means they readily adapt to what nature or humankind offers. They tend to forage in flocks, and in autumn they scratch about the forest floor for fallen fruits, acorns, seeds, tubers, grubs, and insects, and sometimes they get lucky when a frog, salamander, or even a small snake is out on a warm autumn day, such as last weekend.

As autumn wanes and leaf fall ends, it’s now much easier to spot Wild Turkeys than it was at the beginning of the month. I sometimes find a quiet spot on a hillside to sit and watch them forage. I also like to imagine the larger flocks as packs of hungry velociraptors, thrashing at and tearing up leaf litter and eating whatever they find underneath, pursuing anything edible that moves.

Once winter weather settles in, fallen berries, acorns, and club mosses under the snow become more challenging to obtain as a food source, but Wild Turkeys are not at all shy about visiting bird feeders with spillage for an easy, but at times, risky meal. Once a flock discovers a feeder source, they often become accustomed to it and keep on returning to the smorgasbord, but their presence also draws possible predators, including coyotes, red foxes, hawks, and owls.

During spring and into summer, Wild Turkeys are less likely to forage around a home, and their diet becomes more diverse. Hens and their rapidly growing poults are sometimes seen along a roadside, hunting grasshoppers or stripping seeds from grasses.

When watching turkeys strut across a rural road or through a field, they may appear slow, and perhaps even clumsy to the casual observer. Don’t let their looks fool you.

A very short runway is all that’s needed before these powerful birds can catapult themselves into the air and explode into flight at speeds of up to 55 miles per hour and then glide in for a landing in a safe zone. Their flight is almost always just a few hundred yards to escape a predator or fly up into trees to roost for the night.

The ability to escape is essential for Wild Turkeys. As we prepare to feast on farm-raised turkeys, coyotes and Great Horned Owls look to our forest gobblers for a feast, if they can catch one. The only way a coyote will manage is by stealth and ambush, which is not easy to do with Wild Turkeys. However, coyotes are highly intelligent and learn the ways of the turkeys in our midst, adapt accordingly, and do feast on turkeys at times. That’s a good thing, for the very act of predation keeps the turkeys in our midst wild and wary, and that benefits their overall population.

A turkey wandering up to a bird feeder in the dawn’s early light might become an easy meal for a coyote, but one of my well concealed motion-activated trail cameras, in a thick woodland near a swamp, captured something far more intriguing. A few years ago, it photographed multiple images of a coyote sniffing around the base of a tree and looking up into the branches at roosting turkeys. When I checked on the camera, I noted numerous turkey tracks about 50 feet from the trunk, confirming my suspicion that the roosting site was active. I believe the coyote’s awareness and patient persistence may have been successful, and perhaps, it ambushed turkeys gliding down from the tree in the morning.

I went back to that very same location earlier this year and came across remains of Wild Turkeys that appeared to have served as early autumn feasts for coyotes, perhaps their pre-Thanksgiving meal. The remains were reminiscent of what’s left after a child happily chews on a drumstick meat until it’s all gone!

A closing thought as we prepare for tomorrow’s feast: Benjamin Franklin advocated for the Wild Turkey being a far more suitable national bird for the United States than the Bald Eagle. Franklin did not get his wish, and our country’s Great Seal was adopted by Congress with the Bald Eagle as its proud centerpiece. The Bald Eagle is celebrated as America’s official bird year-round, but on Thanksgiving Day, the turkey takes center stage.

Happy Thanksgiving to all from the Wilder Side of Oakland County!