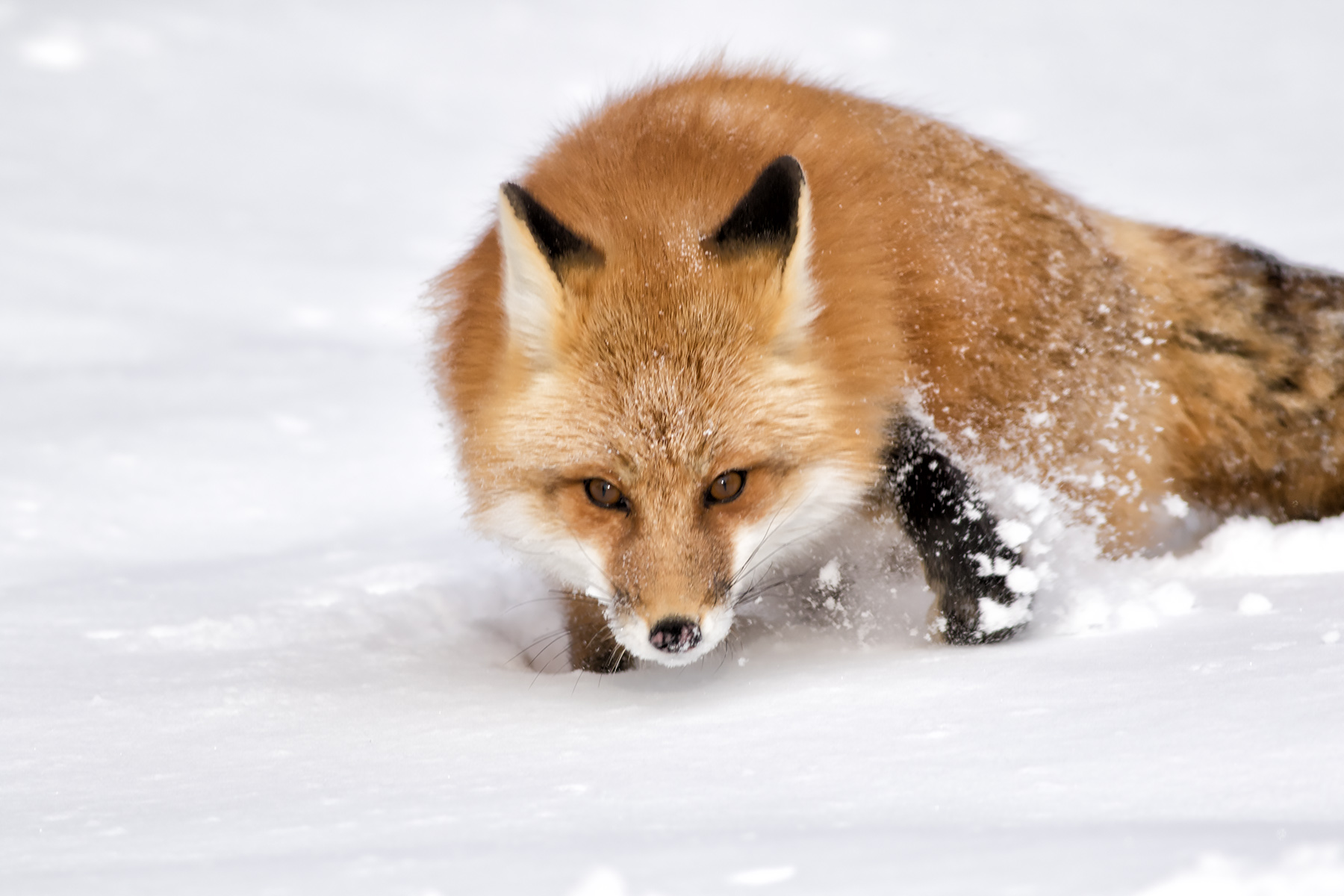 Winter’s approaching and with the changing season, a seldom seen predator with luxurious fur, a large bushy tail and a reputation for “craftiness” accelerates its stalking of fallow farm fields, meadows, parks and yards in its endless hunt for mice and meadow voles. Easily recognizable by the stunning contrast of its rusty-red coat against snowy meadow backdrops, the red fox is well adapted to life in Oakland County. Over the years I’ve captured a few photos of red fox in the wild, as well as images on my trail cameras, but none are even remotely as stunning as the image above. It was shared with me by Ann Brokelman of the Coyote Watch Canada Outreach Team who photographed this beauty at Algonquin Provincial Park in the wilds of Ontario.

The red fox, scientifically known as Vulpes vulpes, is the smallest wild member of the Canidae family, which includes coyotes, gray wolves and domestic dogs. Their thick winter coats and the ability of the human-mind to exaggerate size make them seem much larger than their actual size. The red fox is only about 15 inches tall at the shoulder and about three feet long, not including its black-tipped tail. They are sometimes referred to as a “catlike canine” because of their mousing behavior, vertically-slit catlike pupils, and the way they use their sensitive front paws to pin down prey. Their vertically-slit pupils, in conjunction with eyelids that close horizontally, allow the fox to regulate the amount of light entering the eye, which in turns helps them hunt across a wide variety of habitats in different conditions, from the darkness of a rainy night to bright snowy fields. 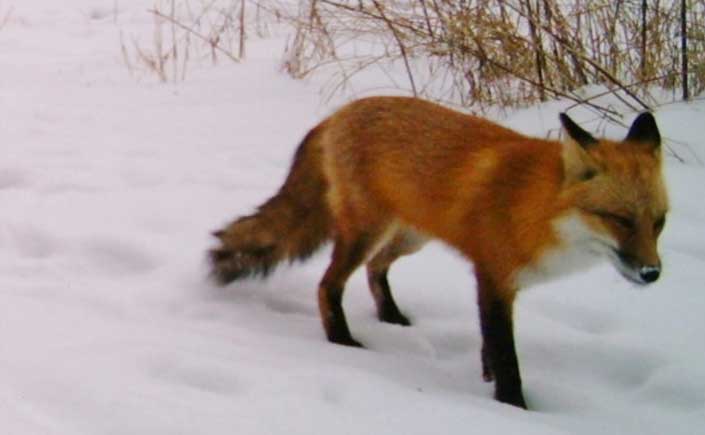 It’s mid-December now and young foxes have dispersed and are traveling widely to explore new territories. That fact increases sightings, for they hunt both at night and in daylight. This makes it the perfect time to separate fox facts from fiction and myths, which is not always an easy task, for the fox has a rich history of misrepresentation in literature. They have been referred to as “cunning tricksters” and have been the baddies in children’s stories since the time of the Ancient Greeks, while in reality they are intelligent, cautious and highly adaptable creatures. The fox is portrayed as sneaky, false and callous in Aesop’s Fables (1919) and even Dr. Seuss seemingly maligned the fox as a clever sweet-talker in his tongue twisting tale of Fox in Sox (Seuss, 1965). 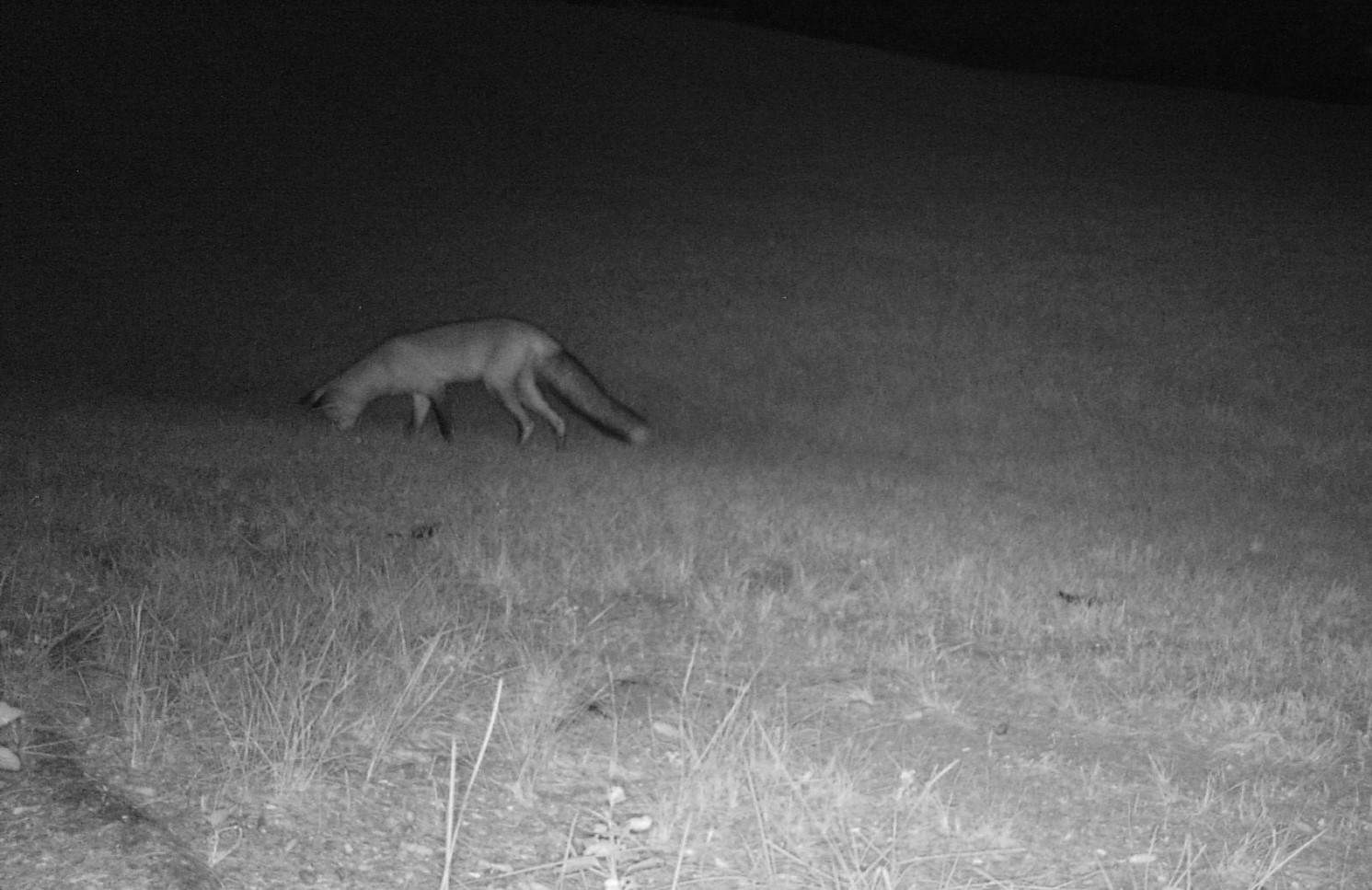 Some organizations work hard to create appropriate wildlife facts for children and one of the leaders in that field is the Wisconsin Green Schools Network. They publish EEK!, an online education magazine for grades 4-8 that shares all sorts of information on nature and wildlife. As for the red fox, they wrote:

“You’ve probably read stories about the cunning fox trying to outwit his animal brothers and sisters. Foxes no doubt got their crafty reputation from the way they look, with their long thin faces and yellow eyes that have narrow slits for pupils. But in real life, foxes are more concerned with finding food than with playing tricks on anyone.”

They followed that with more facts to stir interest and set the record straight.

“The red fox is a lean mean hunting machine that’s built for speed. About 3-3 ½ feet in length, slinky and long-legged, they only weigh 9-12 pounds full grown. But red foxes look a lot bigger because of their thick fur, which can range from deep brownish red to sandy blonde with black legs, feet and backs of the ears and white underparts. Sometimes, red foxes can even be all black or black with white tips (called “silver”), or have a dark brown “cross” across their backs.” 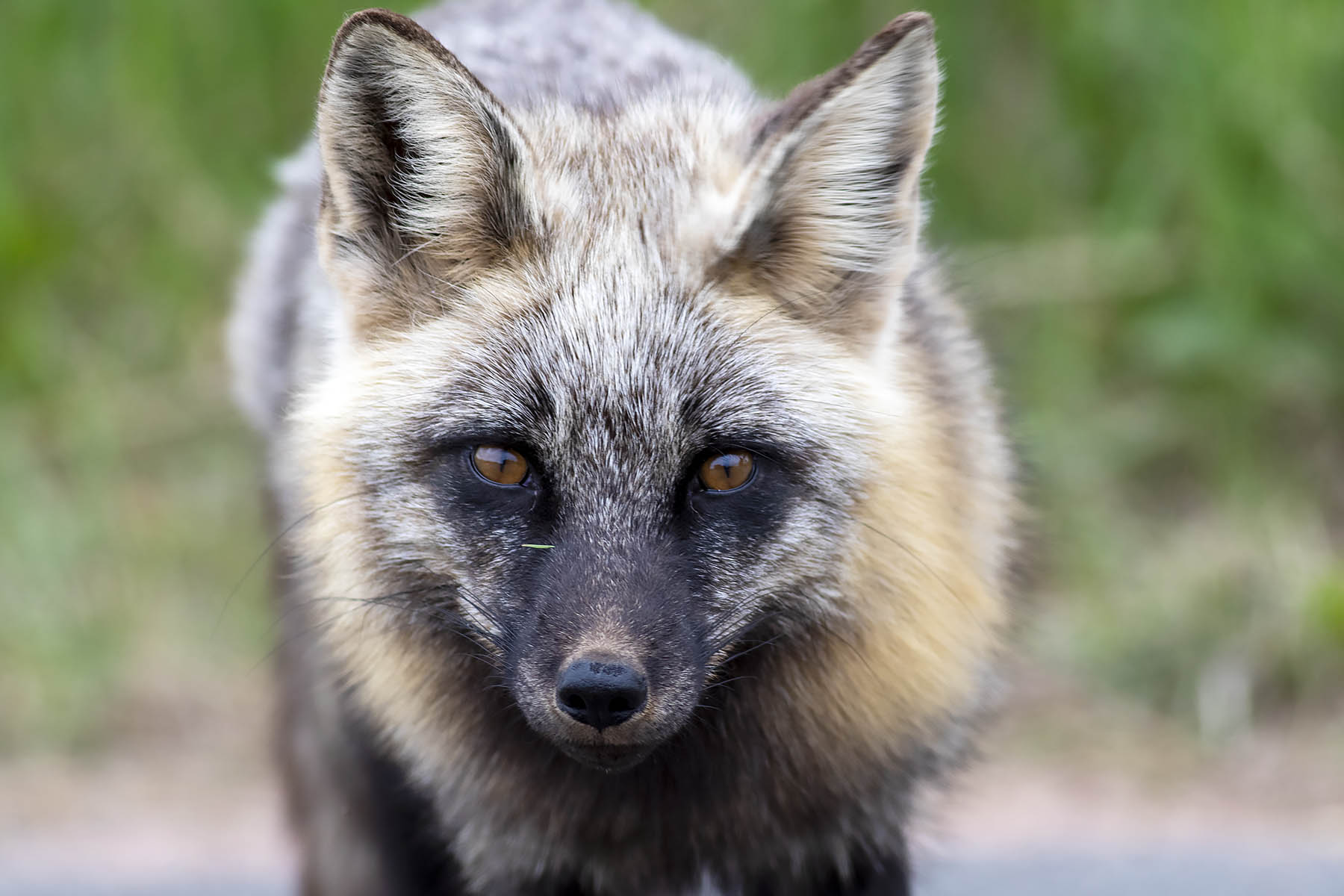 NOTE: The cross fox is an unusual color phase of the red fox. This cross fox image is also from Ann Brokelman and was photographed on Prince Edward Island, the smallest province of Canada.

The red fox is very much a part of the Oakland County landscape. It’s often said that red foxes are intolerant of human activity, but in reality, they are keenly aware of human behavior and have adapted to our ways much faster than we try to learn about their ways. I like to use the phrase “wary watchfulness” to highlight their adaptability and behavioral patterns when they set up housekeeping in a suburban neighborhood, often by taking over and expanding a groundhog’s burrow for a den, perhaps gaining a meal in the process.

Some of my favorite trail camera images are from a suburban Oakland County neighborhood where a homeowner excitedly contacted me a few years ago about her “bushy-tail garden patrol.” She was referring to red foxes that kept the rabbit and groundhog population down and let her vegetables flourish. She granted me permission to set up trail cameras and I did. The foxes coexisted rather nicely with her and they both came out winners. However, she acknowledged she did not let her cat out at night – a wise move, for the red fox is an opportunist hunter. 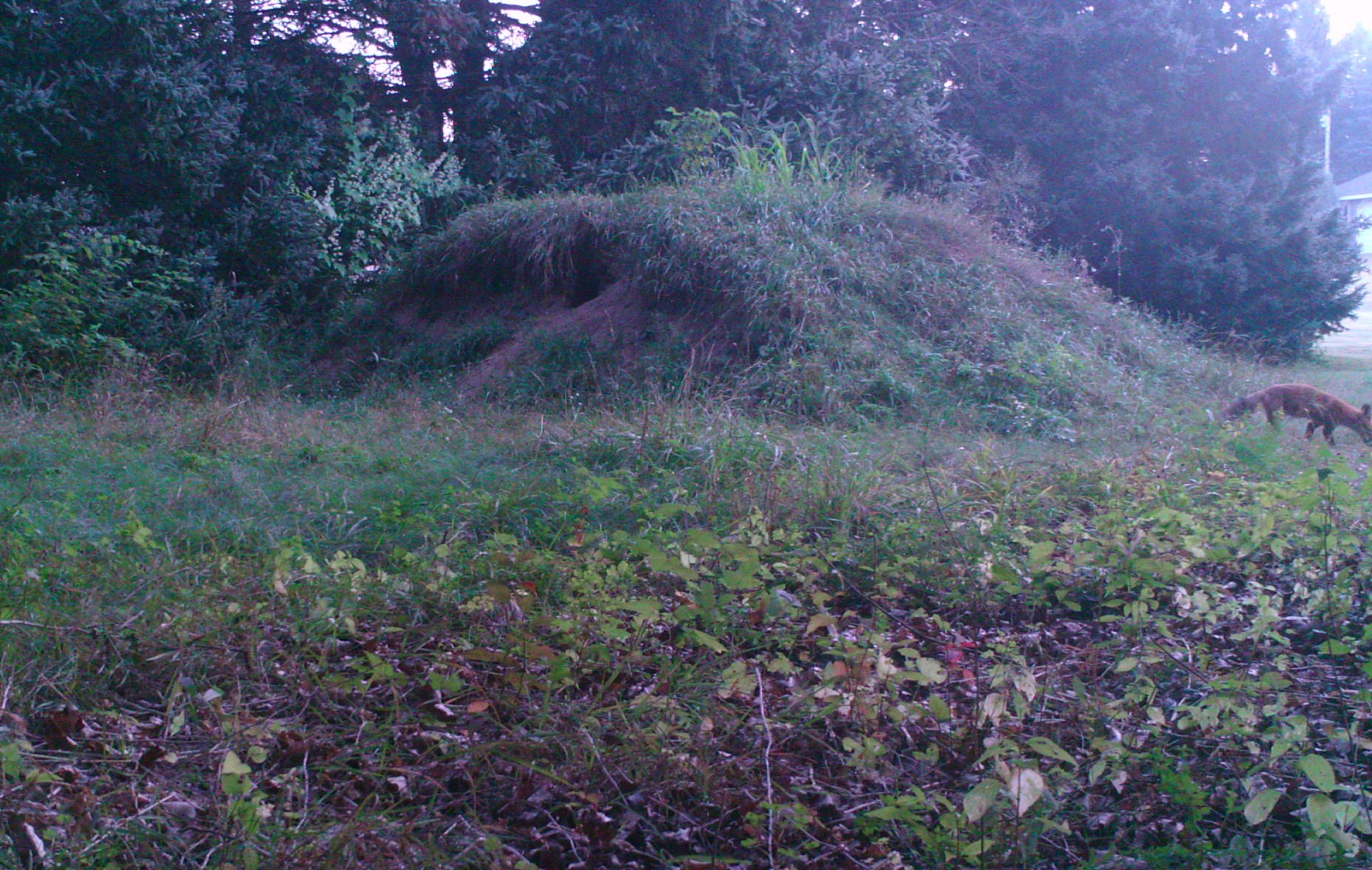 Life, however, is not always easy for a red fox and questions have come my way recently about a flurry of sightings near homes. One note came to me with a two part question, “How come the fox I see does not stay in the woods? I live near the Bald Mountain State Recreation Area.” The second part of the question asked, “Why would it wander through a subdivision near homes?”

The woodland part of the question is the easier part to answer. The red fox is not now and never was a creature of the forest. It’s highly probable their numbers in Oakland County and elsewhere across much of North America are higher now than they were when Europeans began to settle the area. The clearing of land and creation of open spaces was a gift for the red fox. The red fox thrives in edge zone habitat where brushy areas and shrubs meet meadows and similar habitat, areas that are now widespread in Oakland County due to our building habits and the construction of trails and recreational based parks. 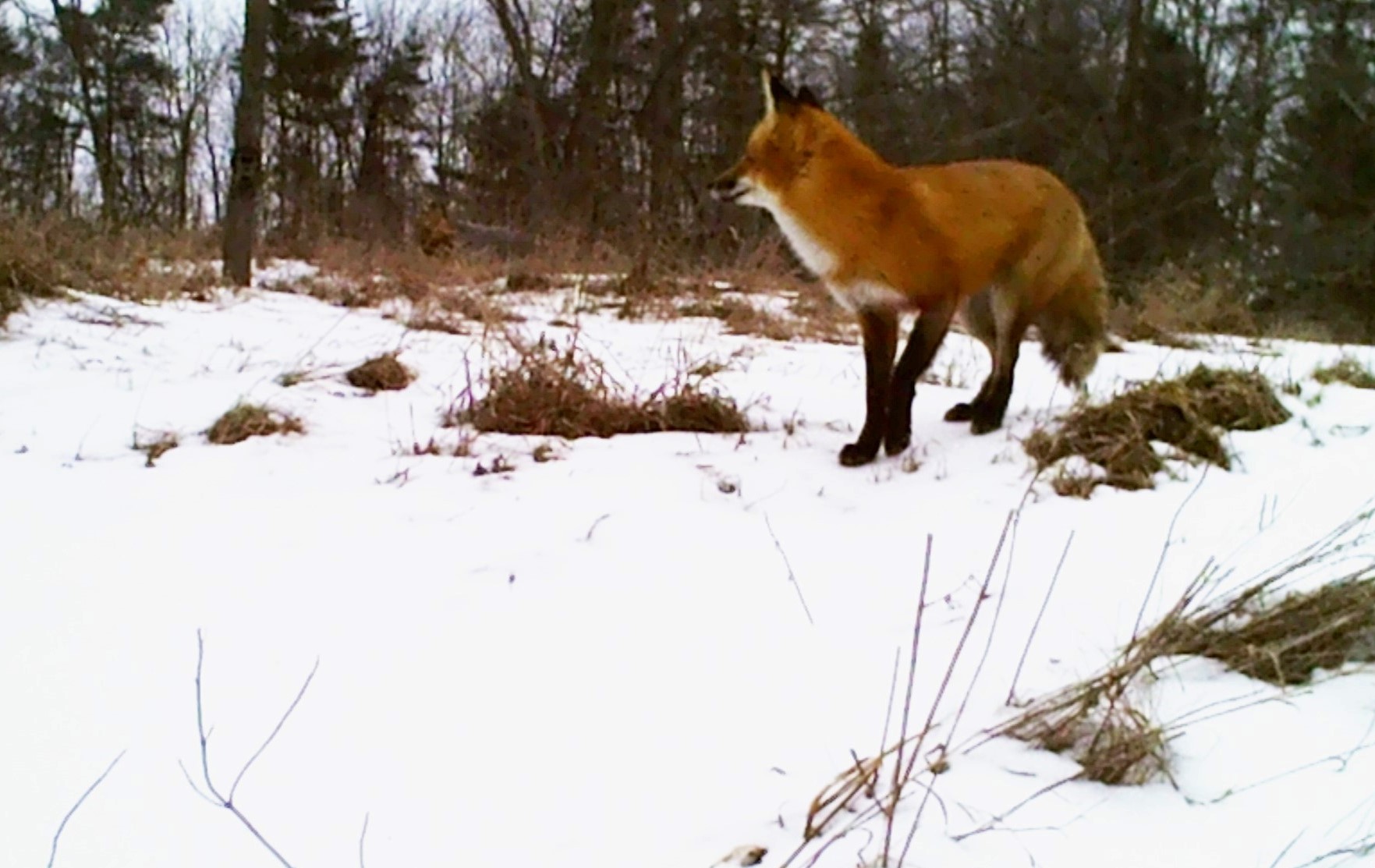 The close proximity of a fox to a home takes a two part answer. Without question, our landscaping practices are more desirable to a red fox than a deep forest and bird feeders attract foxes, not for the seed spillage, but for the variety of small mammals that come in at night to feed. However, interspecies conflict may also play a significant role in the likelihood of a fox staying close to our homes. Coyotes will sometimes kill a fox if an opportunity presents and coyotes are not likely to den or stay as close to human habitation as a fox. The wary and highly adaptable red fox population may sense it’s safer near homes and food is plentiful in all seasons.

Foxes are superb hunters with a finely-evolved battery of senses that allow them to interpret their surrounding habitat and respond accordingly to perceived threats or switch into playful or hunting modes when the opportunity presents. They have a very keen sense of smell, acute hearing and excellent eyesight, all of which are assets to them in their masterful hunting techniques. They are fleet of foot and can escape quickly when danger presents. They can even climb onto low slanted limbs of a tree if need be, but nowhere as masterfully as the gray fox which is a skilled tree climber. Brokelman artfully captured this image of a red fox scanning its world from a tree branch at Algonquin Provincial Park. 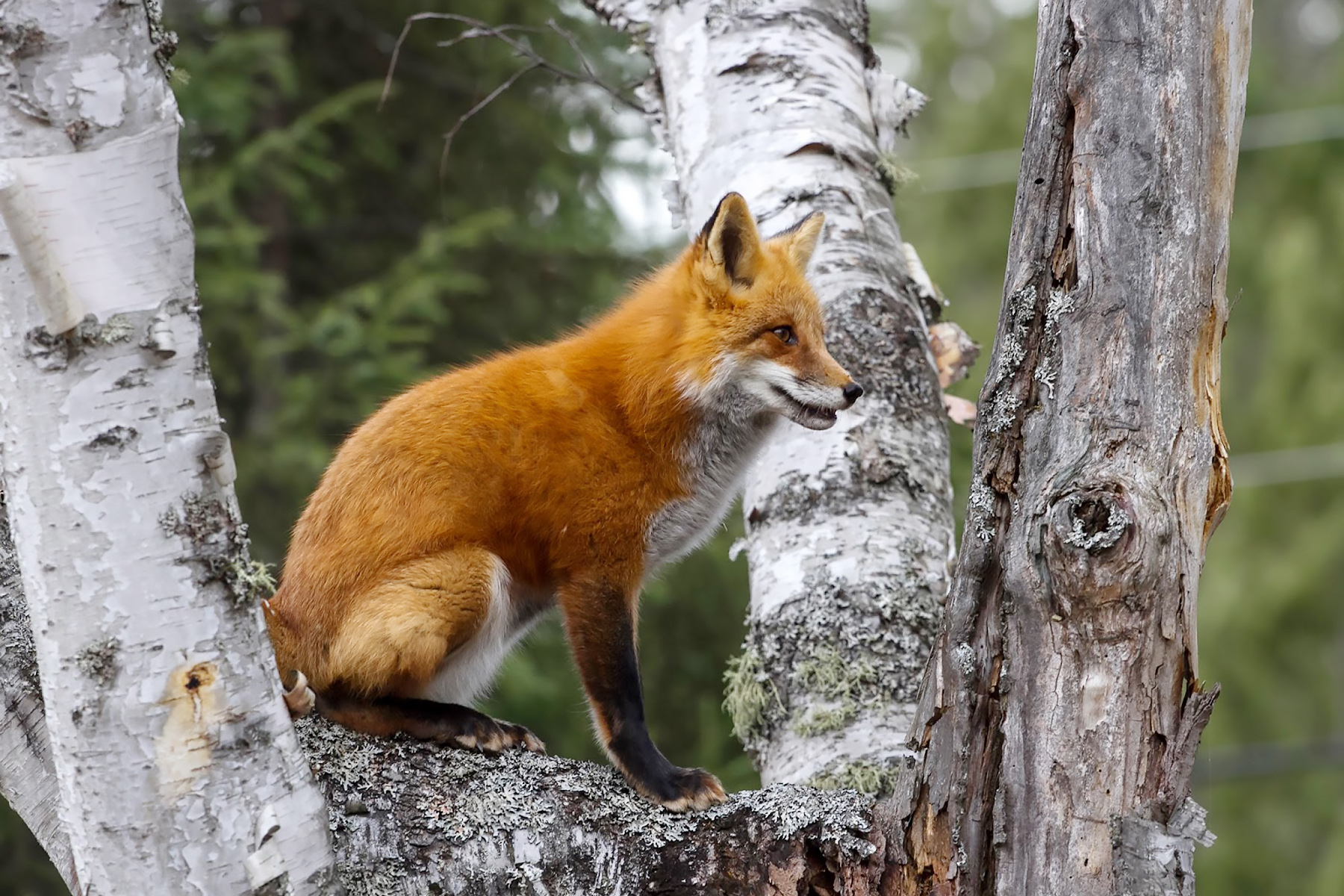 They can also navigate thick brambles to flee a pursuing dog or catch a rabbit, and the slightest movement may draw their attention, be it the danger of a coyote in a field or the temptation of a chipmunk nosing about a fallen log. But they are perhaps best known for their mousing technique: they listen acutely for the faint sound of a mouse or vole in a tunnel under the snow, this is followed by a dramatic leap up and then a head first landing in the snow to snatch a meaty morsel. Someday, I hope to capture such an image in my small corner of the wilder side of Oakland County, but until then I’ll just settle for cameo images on my trail cameras.

2 thoughts on “Meet the Wary and Watchful Red Fox”