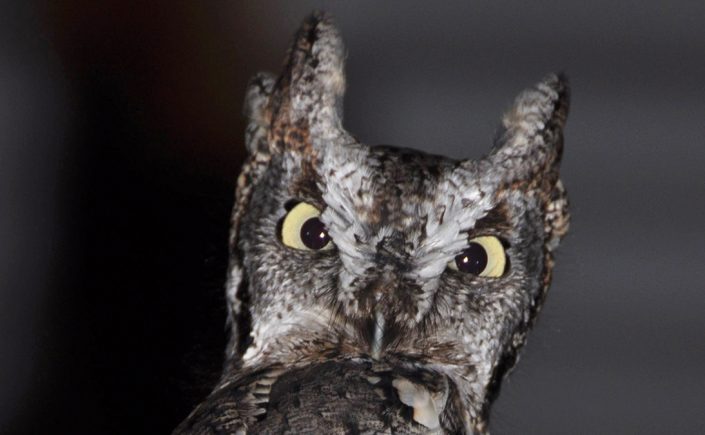 I had not thought much about Screech Owls until recently, when two things happened this month. A few weeks ago I began to hear their annual high-pitched whinnies and magical sounding soft trills coming from the edge of my woods. It’s a sound I know well and hear every February, especially if the bedroom window is open a crack, as it usually is, even on cold winter nights. It’s a sound that makes me smile.

And then earlier this week I received a text message with a photo attached from my friend, Nelson Webb. He wanted my input on a puzzling nature encounter he had just witnessed. He noticed a Blue Jay flitting above the hollow of a dead tree near his mailbox in the City of Troy. The Blue Jay was loudly calling as if to say, “Hey, look over here! Over here! Over here!” As Nelson approached, he saw something else; it was a tiny owl perched motionlessly in the hollow of the tree, an owl that blended in so well with the tree bark that it would have gone unnoticed had it not been for the harassment of the jay. The activity of the Blue Jay he witnessed is called mobbing and serves to alert other birds to the presence of an owl or other possible predators, such as a house cat. Black-capped chickadees will frequently join in the fray and alert other birds of the predator’s presence. I confirmed that the two photos he sent were of an adult Screech Owl, an owl that is a master of camouflage and only about nine inches tall, including its ear tufts.

I gambled that if I drove down, perhaps I could capture some close up images with my telephoto lens, knowing full well that owls do not tend to mug for cameras. I made two attempts, but the owl remained hidden from sight both times. I reminded Nelson that on cold sunny days, screech owls are sometime seen sunning sleepily in the entrances of their tree cavities so he should keep his camera ready. So far Mother Nature has been keeping the sky cloudy during the hours he is home and the owl has been “indoors.”

With the excellent cavities in Nelson’s tree, sites that would be perfect for raising a brood, I doubt his owl will leave the area. Screech owls are skilled hunters that will perch on a tree limb and use a swoop and catch technique to capture small prey that pass beneath them. His tree would be a perfect perch for swoop and catch hunting as my “investigative” photos confirmed. With their excellent eyesight, keen hearing and silent flight ability, the hunts are usually successful.

Screech owls, like other owls, are most active at night, although they often hunt at dusk and dawn. Sometimes, just as Nelson witnessed, they are spotted in daylight just “hanging out” at the entrance to their nesting cavity. They are found most commonly in deciduous woodlands with mixed age trees, in old apple orchards, and although they are not often seen, they are surprisingly common in wilder sections of our cities and suburbs if there are trees with hollows or if they find an abandoned woodpecker nesting hole. With Nelson’s tree being perfect habitat for a Screech Owl, I suspect there may soon be a pair taking up residence. When trying to attract a mate, the male will select a tree cavity and entice a female with his song. I don’t think that his owl will wait long, for it looks like a very good neighborhood for raising a feathery family that feasts on mice.

We chatted more a few days later and he described hearing strange noises over the past few nights. After I sent him an audio link from the Cornell Lab of Ornithology, he confirmed that the whinnying sound he had been hearing was indeed from Screech Owls. It’s the sound naturalists and others in the know love, for it signals their breeding season is underway.

In the past few years, I’ve attended Owl Walks at Bald Mountain State Recreation Area and at Bloomer Park in Rochester Hills and have captured a few grainy photos. I have also attended public raptor programs that gave excellent opportunities to photograph captive Screech Owls in both their gray and rufous morph colors. These are owls that cannot be released back to the wild because of injuries.

When I worked at West Bloomfield Parks as their naturalist, I would frequently lead owl expeditions at the West Bloomfield Woods Nature Preserve with about a 50% rate of close encounters. I will never forget the sunny winter day a West Bloomfield resident who had attended one of the unsuccessful owl walks excitedly called me to come see her mailbox as quickly as I could. I did. A Screech Owl was sunbathing in the open mailbox where it felt secure.

By early March, about the time red maple buds open and skunk cabbage pushes up through ice along creeks, female screech owls emerge from whatever nearby hunting grounds they inhabited through the winter. I am not much of an ornithologist, but my more bird savvy nature friends let me know that once eggs are laid, the female leaves the nesting cavity only briefly at dusk and perches nearby where the male feeds her. Throughout her time on the nest, her mate tends to roosts nearby and maintains vocal contact with soft love trills. Eggs are laid directly onto natural debris existing within the tree the cavity. Nestlings hatch 28 days later and are helpless at first, but mature very rapidly. The male typically conducts the hunting during this period and the female tears the mouse or whatever prey is brought home into small bits for the ravenous owlets.

“What’s for dinner?” might be the thought from the hungry owlets. A snowy late winter night answer would most certainly be mice and meadow voles. That’s also the kind of night that may have me building a warming fire and talking to the owls under a full moon. But after winter fades, these rather handsome small owls hidden in our midst feast on a smorgasbord of palate pleasing Oakland County delicacies including katydids, moths, treefrogs, bats, baby rabbits, earthworms and even small birds. Some naturalists claim they also splash down in shallow wetlands to snag big tadpoles, small fish and crayfish. One thing that is certain and without debate, there is no shortage of food or nesting cavities for these secret neighbors of the night in the wildlands and suburbs of our county.