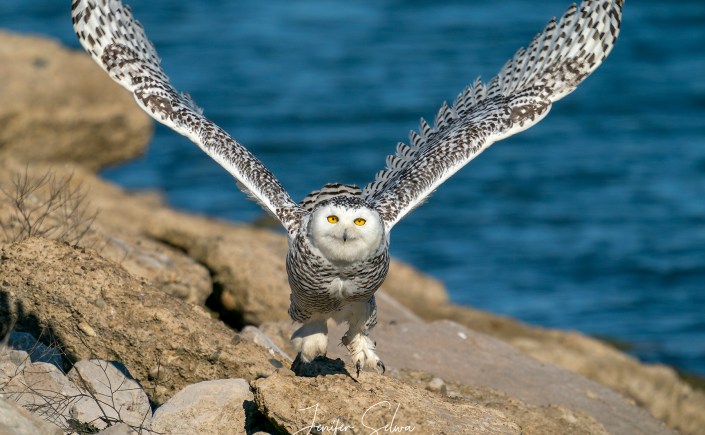 The sighting of a Snowy Owl is a memorable and magical moment of nature’s way. This stunning lead image, and the final in-flight image were both captured during the last week of November along the east shore of Lake Michigan by nature photographer Jenifer Selwa’s long lens. She graciously shared them with me, along with critical coexistence advice, as these powerful owls of the High Arctic tundra continue on their journey.

“If you see snowy owls, be sure to give them plenty of space so they don’t feel threatened. Staying in your vehicle, which acts as a blind, is ideal. If you are with a small group of people, keep the group together so the bird does not feel cornered. Be sure to talk softly and do not make sudden movements. Just because the bird may let you approach closely, doesn’t mean you should. Watch their body language and if they appear wide-eyed while quickly turning their head around, they are on high alert and sending you a message that you are too close.”

Her words should not be taken lightly, for although Snowy Owls are strong fliers, many of them, especially the juveniles, are tired and hungry after their migration into Michigan. Of all birds great and small that appear in Oakland County, perhaps none draw more media attention and excited searches from avid birders and curious onlookers than that of the majestic Snowy Owl. I look to them as winter’s gift from the Arctic. Just the thought of their presence offers a source of solace, peace, and refuge during the pandemic, a reminder that nature always seems to find her way.

Hinterland Who’s Who of the Canadian Wildlife Federation (Environment and Climate Change Canada) created a beautiful and highly informative five-minute video about the natural history of Snowy Owls. Their information will help you understand their behavior and the challenges they face. Watch it here before you read on.

Project SNOWstorm is a volunteer science-based organization that uses innovative science and tracking technology, along with human observers, to study Snowy Owl “irruptions” in order to better understand their migration and behavioral patterns. Snowy Owl migration patterns hold secrets and mysteries. However, based on updates posted by Project SNOWstorm and direct messages from birders I know, there is no question that these owls are already appearing in relatively larger numbers, including about 60 miles northeast of northern Oakland County. Others are even closer along the Lake St. Clair shoreline. The Peregrine Fund clearly explains Snowy Owls’ irruption process and their “mysterious” migration patterns:

“Snowy Owls have been known to travel surprisingly long distances far out of their normal range. This phenomenon is called irruption and scientists believe there are two main reasons for one to occur. It may happen when the populations of lemmings and voles – the Snowy Owl’s main prey items – get very low. This would force these owls to travel farther and further in search of food. Or just the opposite may be true. If prey populations are very high, owls may have very successful breeding seasons and produce lots of young. If you have ever seen children scrimmaging for candy beneath a broken piñata, you know lots of individuals create lots of competition. In this case, these owls will also have to travel further away to find food and avoid competing with other owls. When an irruption occurs, Snowy Owls have been known to travel as far south as northern California, Texas, and Oklahoma. In fact, in 2011 a Snowy Owl made it all the way to Hawaii!!”

As of today, I have not seen any Snowy Owls within Oakland County, nor do I have any confirmed local sighting locations, but wide-open spaces lure them in all across the state. Our fields, golf courses, lakeshores, cemeteries, country club open spaces, and clearings alongside airport runways, all might appeal to a Snowy Owl as places to rest and refuel. However, I believe I saw one last Saturday while returning from an unrelated, yet nature-related, excursion in Ohio. It was a large heavy-bodied bird that appeared mostly white, cruising low to the ground over an open field with steady wing beats in classic Snowy Owl fashion. In my heart, I believe it was a Snowy Owl. However, at my speed of 65 mph, it was not safe to keep looking and so I drove on.

Do I believe some Snowy Owls are here now in Oakland County? Yes, I do. Perhaps one is near you right now. Would I share an exact location of a confirmed sighting if I had one? No, I would not. It is important to give Snowy Owls a large amount of space because they are sensitive to human disturbances and some likely need to regain their strength before hunting. A Snowy Owl will often perch for hours before hunting, and a human approaching carelessly might disrupt its process and even threaten its chance of survival.

Back home on the High Arctic tundra, the primary prey of Snowy Owls are lemmings, small rodents that resemble large meadow voles. Arctic Snowy Owls also eat arctic hares, ptarmigan, seabirds, and on occasion, even kill arctic fox kits. Snowy Owls that may arrive in Oakland County, and elsewhere in Michigan, seek out treeless places and wide-open spaces that present good views, which are critical for hunting.

They will feed on whatever is available in our county, and that includes squirrels, mice, mink, weasels, meadow voles, and ducks. If a rabbit comes out of its cover, it too may fall prey.

Although most of their prey is captured after being spotted from a perch, such as a fence post, telephone pole, rooftop, hay bale, gravel pile, or even an anchored boat, they will also hunt on the wing. An owl will fly low to the ground, ready to drop silently with deadly accuracy on their prey. Their extraordinary vision and excellent hearing make it easy to narrow in on their prey — be it a rabbit hopping across a field, a mallard duck paddling in marsh, or a meadow vole scurrying beneath fresh snow. Snowy Owls use their superb hearing to pinpoint exactly where hidden prey is moving under the snow and then swoop down on silent wings to capture it with their sharp talons without ever seeing it.

Unlike most owls, such as our common Great Horned and Screech Owls that hunt at night, Snowy Owls work the day shift, and that’s why their daylight sightings are common. When I captured my Snowy Owl images, I was parked alongside a farmer’s field just a few miles inland from Saginaw Bay. That lookout post even gave me the chance to capture a short video of one on a telephone pole. I was also close enough to differentiate between the males and females.

Adult males are almost pure white in color, while females are slightly darker with their white feathers barred with brown. From my semi-stealthy position within the car with the window down, I noticed they occasionally swiveled their heads or leaned forward and seemed to be blinking their intense yellow eyes. Perhaps that action was to get a closer look at potential prey, or perhaps they were wary of me, as I watched them from my lookout post.

The only Snowy Owl I ever photographed in flight – even though the image was terribly blurry and the sky was heavily overcast – was near the Lake Huron shoreline where I was again using my car as a blind. Sadly, it took flight from its rocky perch when others got out of their cars and walked closer, disrupting its rest. I can only imagine the joy that Snowy Owl advocate and photographer Jenifer Selwa felt when she was in the right place at the right time on the Lake Michigan shoreline with her powerful lens capturing a low-flying Snowy Owl, perhaps on patrol for a duck dinner. Winter draws near, and perhaps one day soon you will be gifted with the sight of a Snowy Owl perched majestically on a fence post somewhere on the wilder side of Oakland County or even perched on a building with a view of the surrounding landscape, for Snowy Owls know no borders.