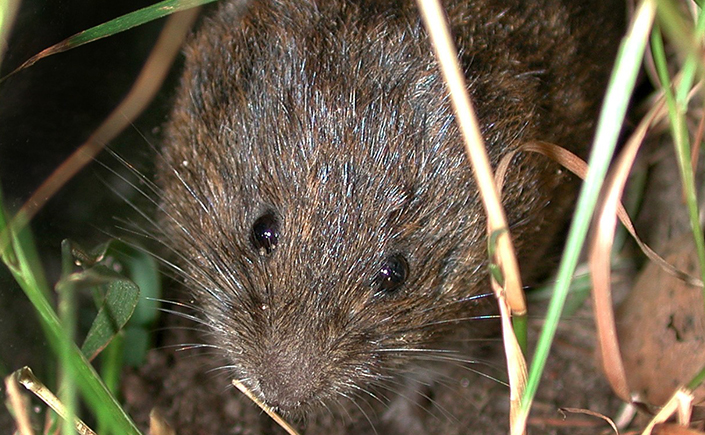 Eastern coyotes loves meadow voles. So do red foxes. Our near blizzard-like conditions followed by sub-zero temperatures earlier this week did nothing to slow down their love affair with these tiny creatures that remain active all winter and thrive under a wintry blanket of snow. However, it’s a one way love affair because these slightly pudgy, meaty, mouse-sized morsels that we call voles are delectable delicacies for the wild canids that must continue to hunt no matter what Mother Nature brings. As a matter of fact, there is hardly a winter active predator in Oakland County that hasn’t developed a taste for the meadow voles in our wintry midst, and the local list of vole-snatchers includes owls, hawks, mink, weasels, opossums, skunks, raccoons, feral cats and domestic cats.

So what exactly is a vole?

The simple answer is this: Meadow voles are a small, somewhat mouse-like rodent bearing the scientific name Microtus pennsylvanicus. Voles, although related to mice, are not mice – even though confusion reigns when they are referred to as meadow mice. And when a coyote or fox leaps up in the air and pounces down on a meadow vole it’s called “mousing”. 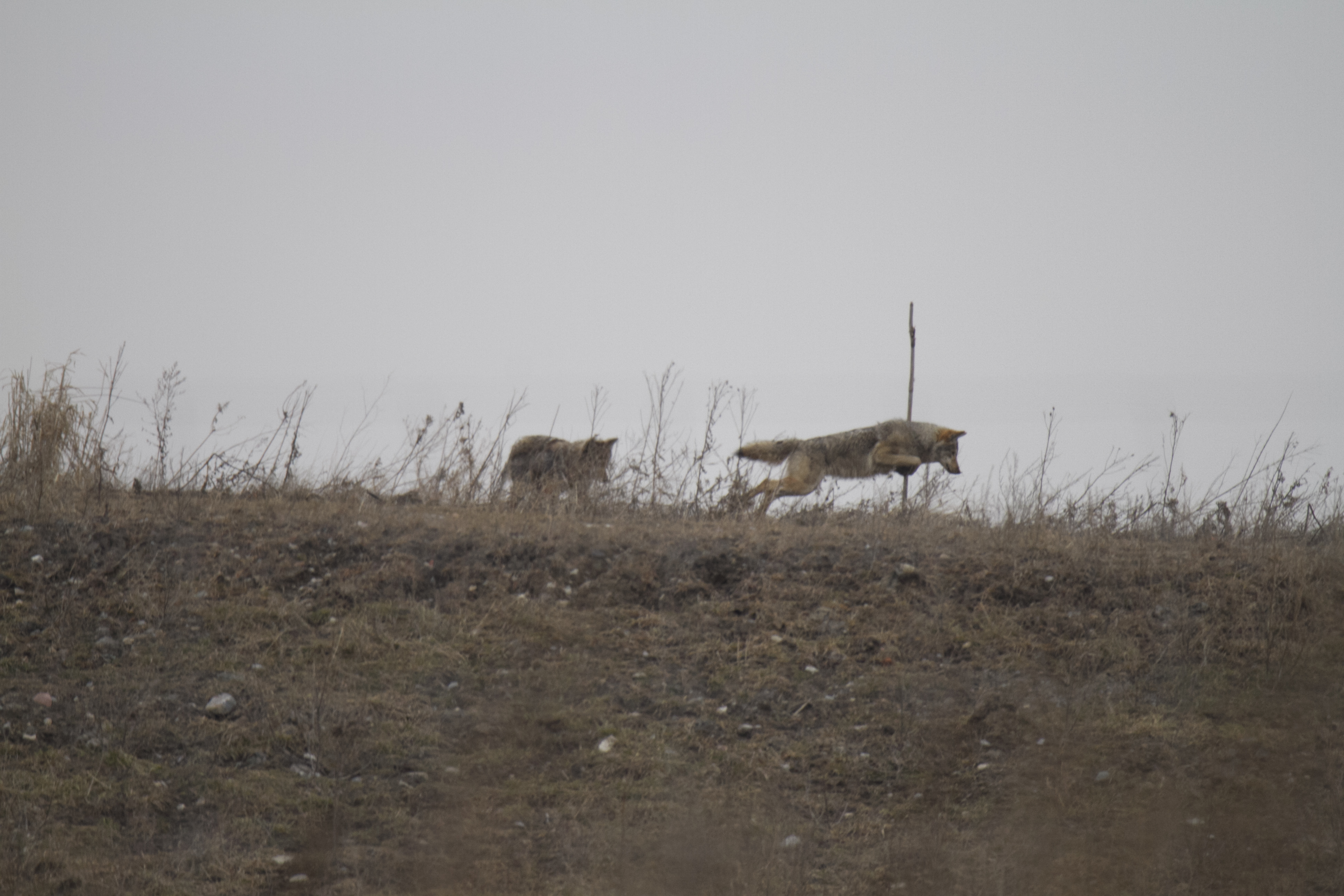 Last week a friend that noticed the abundance of exposed vole tunnels in melting snow in his yard, before new snow blanked the landscape, asked me if a vole is a cross between a mole and mouse. They aren’t that either; though at times, voles may enter and emerge from a mole’s tunnel causing even more confusion. A vole is simply a vole and with that point of clarification out of the way, today’s nature ramble is specifically about the most common vole in Oakland County, the meadow vole. There are hundreds of thousands, if not millions of these highly prolific creatures in our county. They are prolific breeders and often produce six litters per year with their offspring becoming sexually mature at just one month old. We may not see meadow voles, but their evidence during times of winter snow melt is unmistakable. 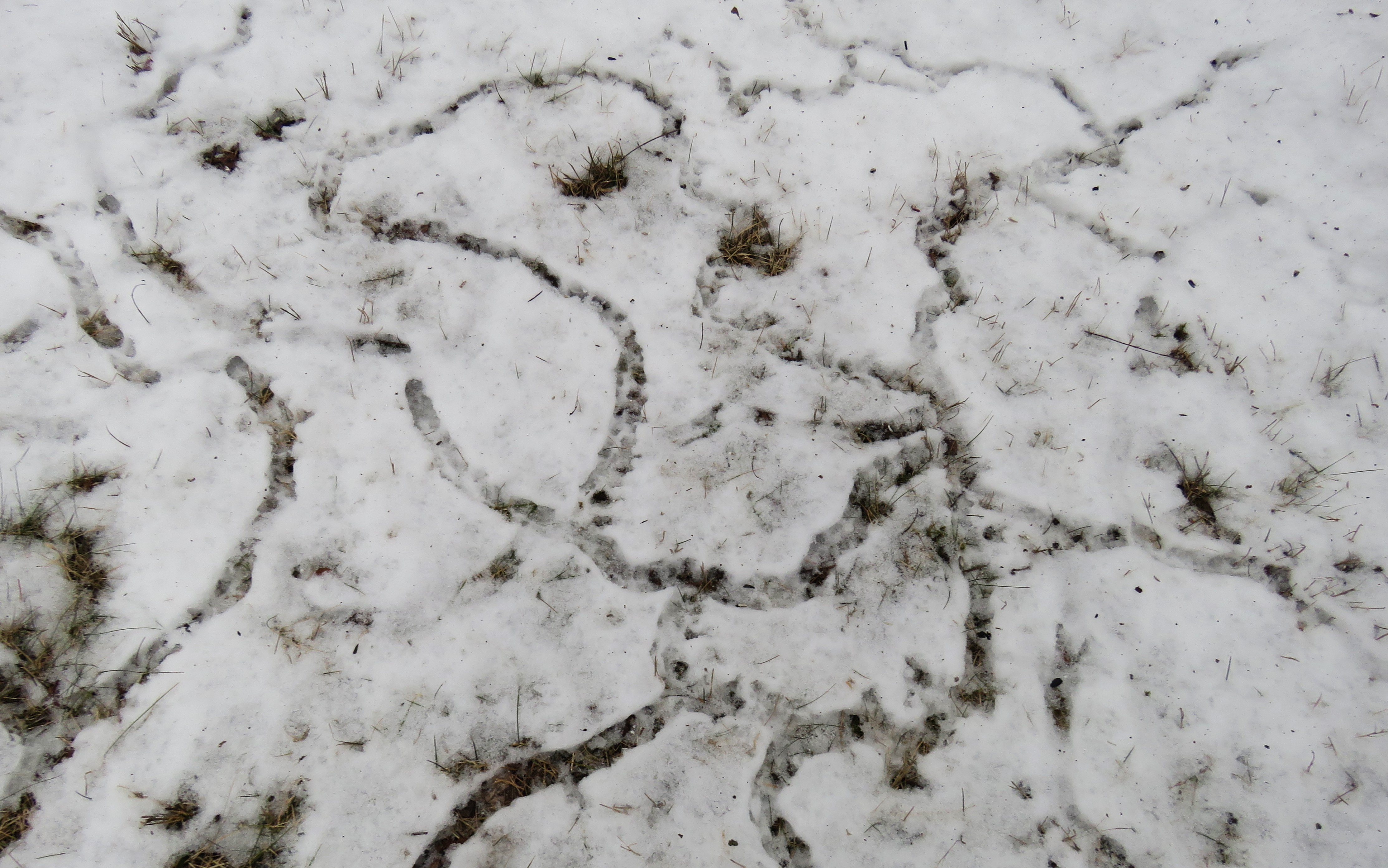 Meadow voles can easily be mistaken for a chubby mouse when a cat brings one home as a “gift.” They are almost twice as heavy as our common white-footed mouse and unlike mice that have ears that “stick up,” voles have rounded ears that are almost concealed and short stubby tails. Meadow voles also have a “cute factor,” perhaps because of their beady black eyes and their luxurious and rather glossy fur coat. Another difference that hungry predators do not care about, but observant humans may notice, is mice have a more pointed snout than the rather rounded face of voles.

Perhaps the most noticeable feature of the voles however, is not their appearance but rather their tunnels under the snow; runways that are lined with grasses. They are easy to notice during periods of winter snow melt, and again in the earliest days of spring before grass greens back up. Voles create extensive tunnel systems through dry grasses that are above the frozen ground but beneath the snow. The tunnels include hidden nesting areas that sometimes serve unintentionally as dining areas for their predators. That system of tunnels, perhaps best described as meadow vole expressways or runways are about 1 ½ inches wide and may go on for dozens or even hundreds of feet, often in a mix of crisscross patterns and occasionally almost in straight lines. The runways lead to areas where they feed under the snow on young tree bark, grasses and other plant materials. Sometimes the tracks of their predators appear near the tunnels, as in these images, one showing opossum tracks and another coyote tracks.

Their tunnel habitat is known as the subnivean zone; the area between the surface of the frozen ground and the bottom of the snowpack. Michigan State University Extension defines the word subnivean this way, “The word ‘subnivean’ comes from the Latin words for under (‘sub’) and snow (‘nives’) and refers to the open, shallow layer that usually forms under deep, layered snow.” MSU goes on to explain “The tunnels lead from entrances to sleeping areas and to known sources of food. The entrance holes double as ventilation shafts, allowing the carbon dioxide created from animal respiration as well as carbon dioxide released from the ground to escape.” MSU confirms that even when the winds may be howling and the mercury plunging, the temperature remains close to 32°F in the subnivean zone. 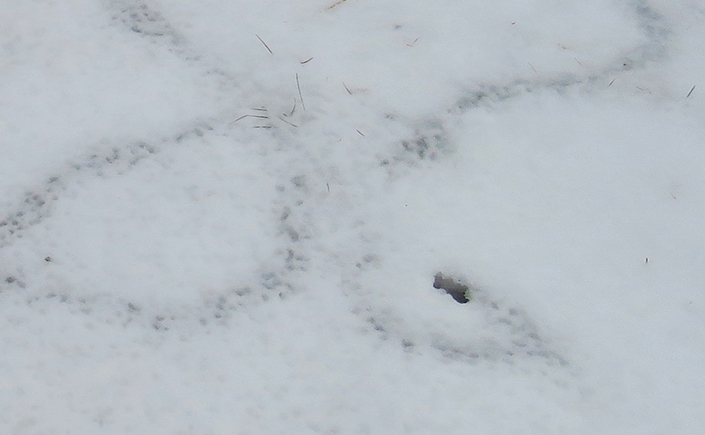 Being protected from the elements does not insure safety for meadow voles. Predators know where to find them, by sound and sometimes by scent. A few years ago I captured an image of barred owl that plunged into the snow after hearing the movement of a meadow vole.

Eastern coyotes are masterful mousers, skilled in the survival art of listening and sniffing for a vole in its tunnel nest or runway, and then pouncing. Coyote Watch Canada shared this video with us of a coyote mousing on a grassy berm (wait for the pounce!).

Winter is a great time to explore the secrets of nature’s creatures, even those in the subnivean zone. Snow is deeper now and most, but not all, of the subnivean tunnels are hidden. But every now and then, a vole emerges from a tunnel hole and scurries briefly along in their topside world. Unlike the bounding tracks of white-footed mice that usually leave a clear four-print pattern with their front feet landing side by side as they travel along the surface of the snow, and their hind feet landing side by side, the meadow vole generally leaves an alternate-track trail with no feet landing side by side. Mouse tracks tend to stay on the surface for a long time and often end at the base of a hollow tree – a perfect winter home for a mouse – or near shrubs where they have transformed an abandoned bird’s nest into a winter retreat.

Walk slowly and look about and the tunnels of voles and tracks of mice may be noted in meadows, parks, the edges of golf course fairways and along the miles of trails that meander through Oakland County. You can spot them most anywhere else in the county that has even a touch of wildness, and that includes urban lots and perhaps your own yard. When the next snow melt comes, explore some more and you are sure to discover the tunnels of the mighty meadow voles.

2 thoughts on “Mysteries of the Mighty Meadow Vole”