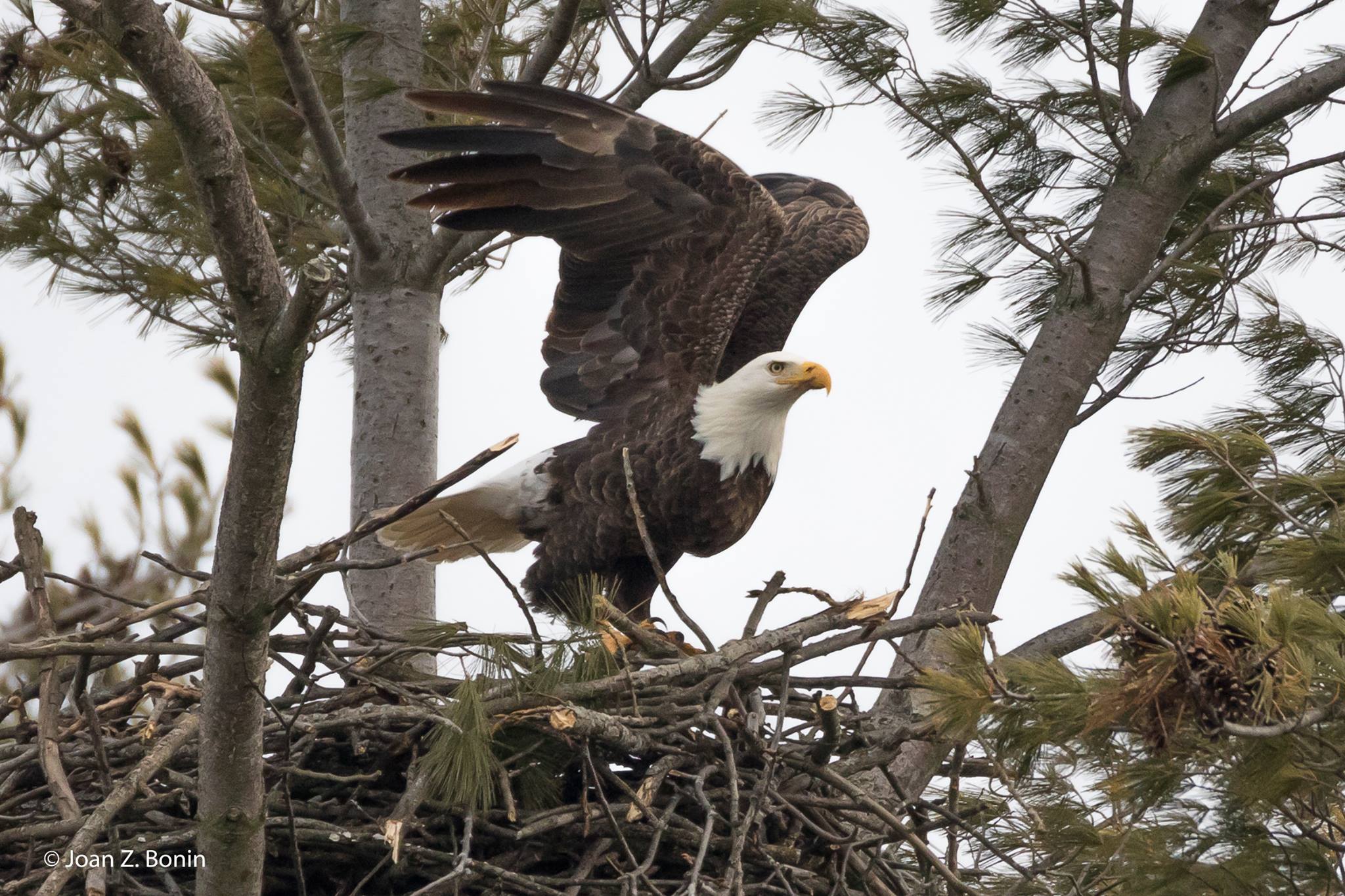 The Bald Eagle is in a word, majestic. When it’s seen in flight against a clear blue sky in a pristine wilderness setting, the image is stunning. One need not travel to the wilds of Alaska or the rugged lakeshores of Michigan’s Upper Peninsula to encounter bald eagles; more than a few winter right here in our midst.

Sightings of bald eagles in Oakland County are no longer rare events, and they are not restricted to the “wilder side” of our county. Close encounters may even occur in highly developed areas with significant human intrusion. During the winter months in northern climates, it’s all about available food. Where the food is, the eagles are. The favorite food of the bald eagle is fish, and that takes us to nearby Monroe County, home of one of the largest coal-fired power plants in the nation. 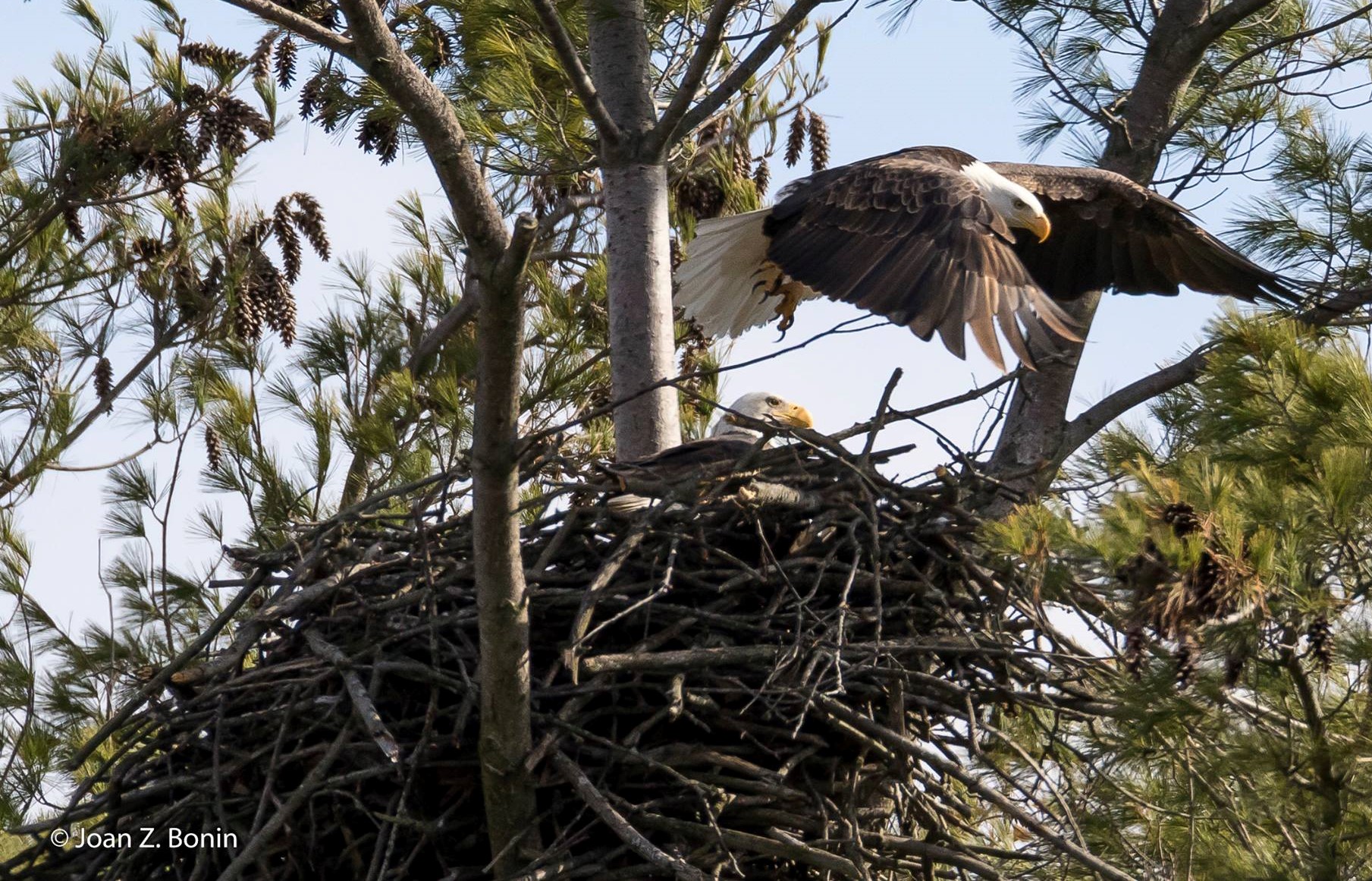 Bald eagles arrive in large numbers every winter at DTE Energy’s Monroe Power Plant, a site that “guarantees” good fishing for eagles. The discharged water used to cool the power plant is about 12 degrees warmer than the surrounding waters. This makes it desirable for fish, especially shad, and of course, the warmed water keeps ice from forming near the shoreline. Combine that with the security of the plant’s highly-restricted acreage and that provides for the eagle’s basic needs: food, habitat and a safe place to gather. At times, close to one hundred living representatives of our National Emblem are perched in trees or hovering over the warmer water ready to descend and grab a fish. One of the rules of nature is the predator follows the prey, even when it’s at a power plant. 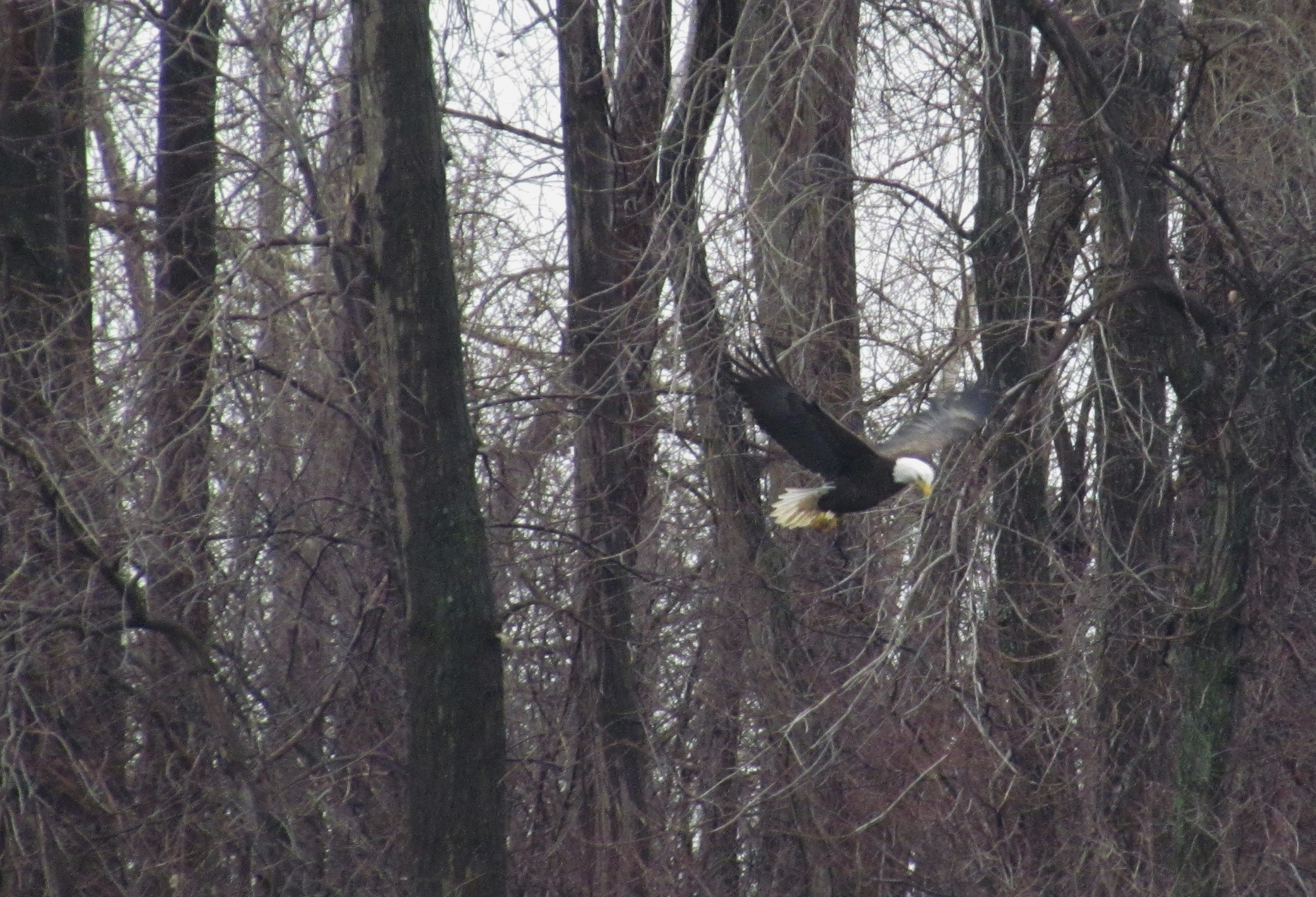 Other eagles fish in more serene areas during winter. The Village of Ortonville is in northernmost Oakland County. For the past few weeks, there have been sporadic sightings of a bald eagle on the ice of a lake that is appropriately named—Bald Eagle Lake. Although ice still covers the lake, an eagle discovered access to fish at unattended ice fishing holes. Either dead fish float up in the hole, or fish that were discarded on the ice make for an easy meal for this local eagle that has adapted to our ways.

Eagles are well adapted to a lifestyle that focuses on fishing. Their sharp, pointed beaks, designed for ripping and tearing prey into bite-sized pieces, get the job done. They have powerful legs and feet that are equipped with large curved talons that are used for killing their prey and lifting sizable fish of up to four pounds out of the water. Combining those facts with a six to seven-foot wing span and superb eyesight make them masters of the sky.

Although fresh fish are the mainstay of their diet, bald eagles are both skilled hunters and opportunist scavengers. A dead deer in an isolated meadow, or on the side of a road, is an all you can eat buffet. A pair of eagles are now entering their sixth nesting season at Stony Creek Metropark and have been witnessed in pursuit of mergansers and ducks. Rabbits and squirrels, and the occasional muskrat that pops up at small open areas of water, add to the menu. In a few months when osprey (a fish-eating raptor) return to our county, eagles will sometimes perch within site of an osprey nest. When the osprey returns with a fish in its talons, the much larger eagle will swoop at the osprey with hopes the fish is dropped. The eagle then dives towards the water to retrieve the fish. Those maneuvers have been witnessed at Kensington Metropark and documented across the nation where osprey and eagles share their fish hunting territory. 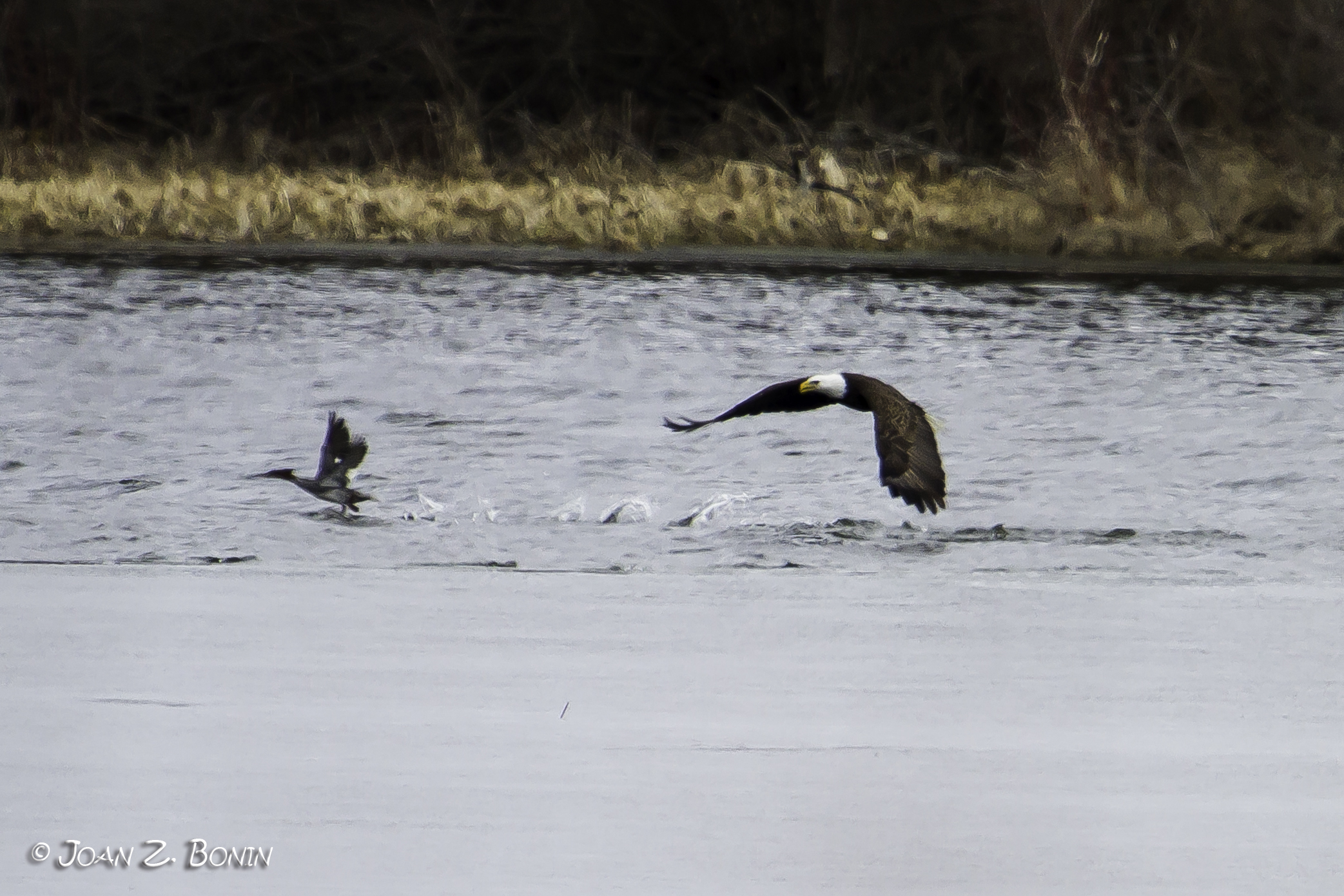 Joan Bonin, Primary Eagle Observer at Stony Creek, has had the honor and pleasure of monitoring the Stony Creek eagles at Inwood Trails since April of 2013. I contacted her a few days ago and here is what she said, “You can easily tell the male from the female with this pair. The male is roughly 30% smaller than the female and his head is fairly smooth and refined. The female is larger. Her head is sculpted, and brow line is more pronounced. Her bill is much larger than his. But please note, you cannot always determine their sex by looking at them. There are large males and small females. Since 2013, they have produced 9 offspring. Eight have lived to fledge. The U.S. Fish and Wildlife Service banded the eaglets (juveniles) from 2013 – 2016. The two were not banded in 2017. Whenever we see a juvenile in the area we always look for bands on their legs. For the first few years the juvenile/sub-adults are vagabonds, you never know where they might be, but we always suspect it is possibly one of ours when a banded juvenile flies over our heads.” 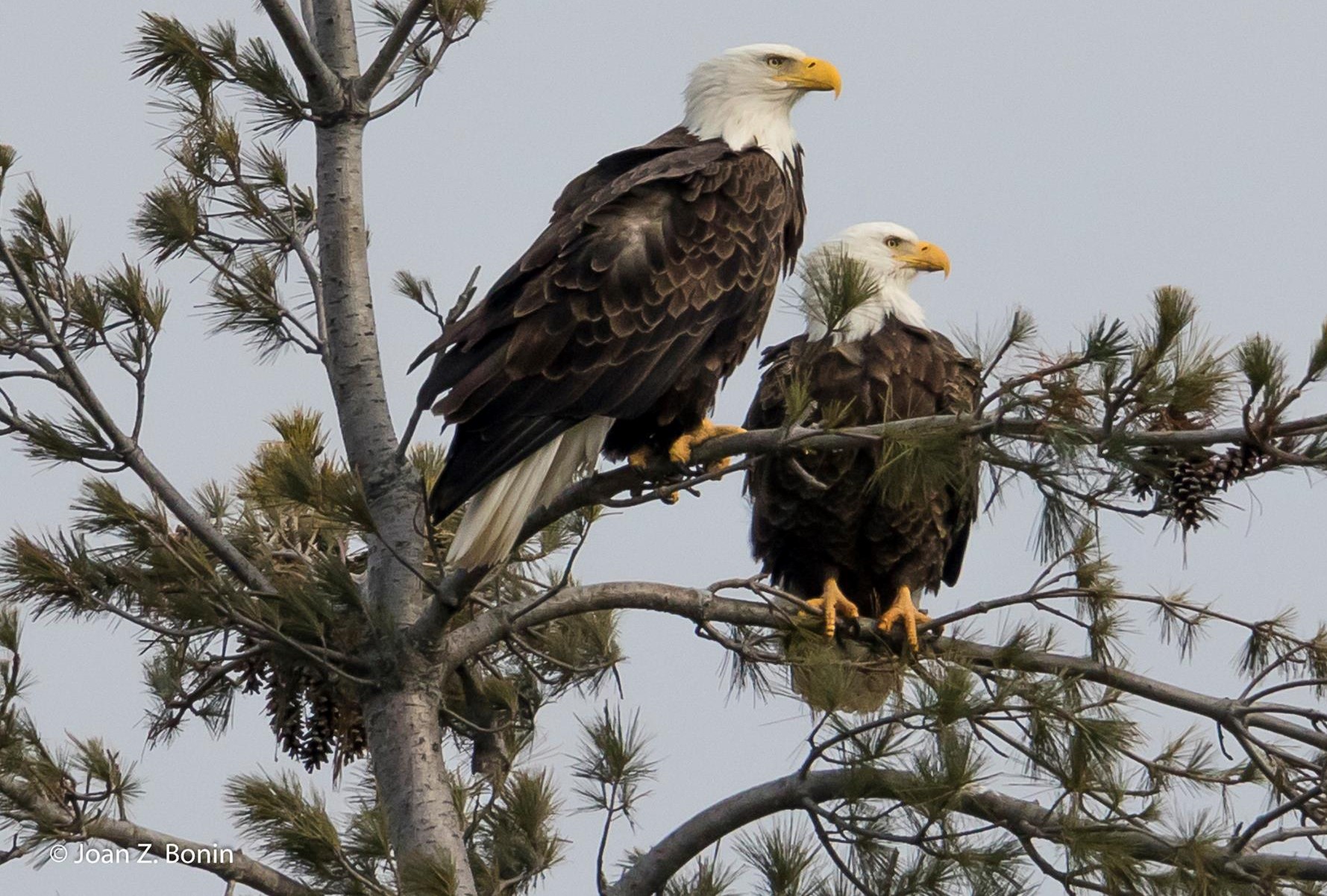 Bonin and I chatted about the bald eagles that migrated from more northern areas to Oakland and Macomb Counties for the winter and she added, “We get many migratory bald eagles in the winter to Stony Creek Metropark. In 2016, there were as many as eight separately identifiable bald eagles at the park, perhaps more. So particularly in the winter, be on the lookout for a bald eagle flying over your head when you visit the park. My passion for our bald eagles never lessens. When a bald eagle flies over my head, it always stops me in my tracks. Keep on the lookout. There seem to be more and more every year!” 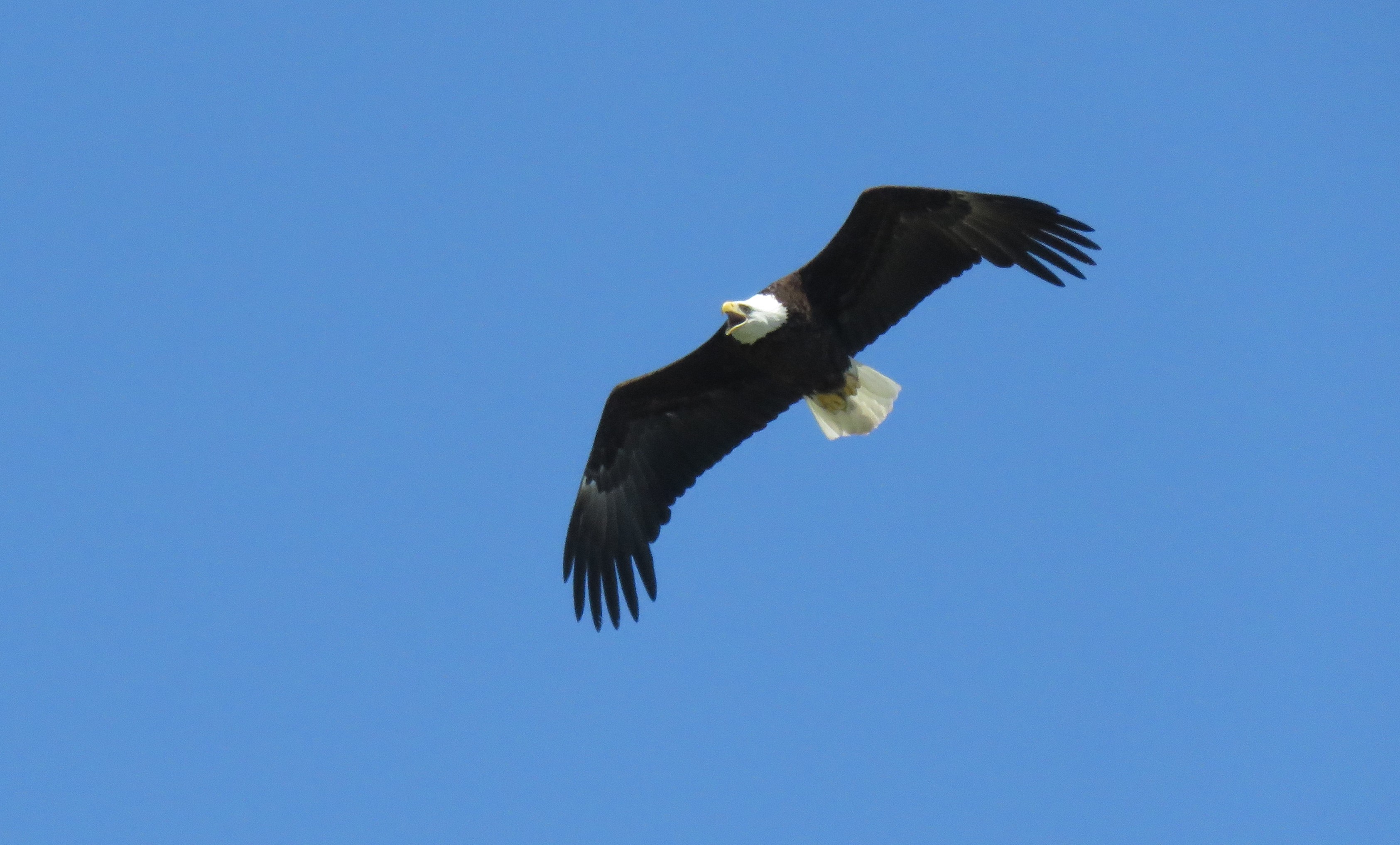 She was disappointed to discover fishing line is now in the eagles’ nest. Entanglement with plastics and human garbage such as discarded fishing lines is a problem for many wildlife species, including eagles. Visitors to the park are urged to pick up stray fishing line, and if any is noted in the nest or tangled on the legs of the eagles to report it to park authorities. Little Bird Nerd has additional details on what to do if you come across fishing line here.

In Southeast Michigan, February is their breeding season, a time that humans must respect nesting sites. Breeding season consists of territorial acquisition and defense, nest building and mating, with mating often preceded by an elaborate aerial display. In the July 2016 issue of National Geographic, the aerial courtship was described this way.

“When it comes to courtship, bald eagles put the wild in wildlife. The maneuver—known as the cartwheel display or death spiral—is chief among their “spectacular courtship rituals,” says wildlife ecologist David Buehler of the University of Tennessee. “The two soar up to high altitude, lock talons, and tumble and cartwheel toward Earth.” They let go before reaching the ground—except when they don’t. In 2014 two adult eagles, talons locked, were found tangled in a Portland, Oregon, tree. (They eventually broke free and flew off.) The courtship display is about “determining the fitness of your mate” and making that mate want to mate with you, Buehler says. “It’s like going out on the dance floor if you’re a really good dancer. There are risks: The stunt could, for instance, end in a fatal crash.”

With eagles returning to the same nest year after year, their nests grow to enormous proportions. The nest is usually located in a tall tree with a commanding view of the area, and in our area that would most likely be a white pine tree that offers a view of water. A typical bald eagle nest (eyrie) may range from 6 – 10 feet in diameter and eventually weigh over 1,000 pounds making them the largest nests of any bird in North America. Nests weighing a ton have been documented. The actual nesting cavity is about four to eight inches deep. It provides a safe place for the eggs to be incubated down in the “protective crib” and safeguards newly hatched eaglets that look in some ways like artist conceptions of baby dinosaurs—not surprising since birds evolved from dinosaurs. Here’s an image of the first local eaglet in over 100 years to be banded back in 2013. 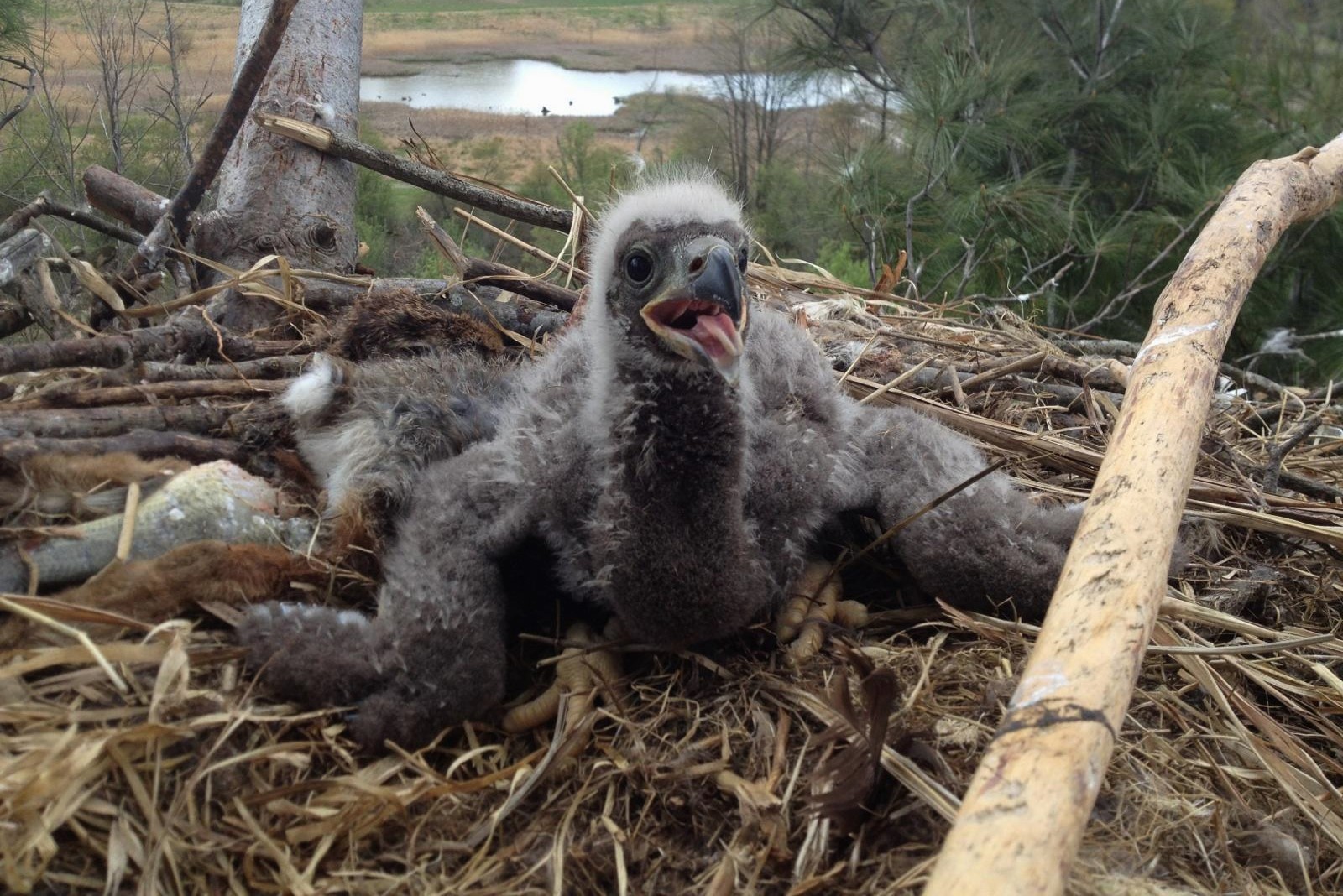 The mated pair of Stony Creek eagles are now putting final home improvement touches on their nest high up in a lofty white pine. It should be noted that during nesting season, trails close to approaching any known eagle nest are usually closed to avoid human disturbance. This seasonal closure, or human exclusion zone policy, takes places at most parks across the United States, and it also takes place at Stony Creek Metropark. The Stony Creek eagles can be viewed with a telephoto lens or with binoculars from the far side of a small pond and they and other eagles may be seen fishing at Stony Lake. This link from the US Fish and Wildlife Service has excellent information on the sensitivity to human intrusion during breeding, nest building and incubation.

Eagles were long ago threatened with extinction. Times have changed. As the U.S. Fish and Wildlife Service explains, by 1963 there were only 487 known nesting pairs in the United States and the threat of extinction was real. Through years of efforts and laws to protect their nests and environment, along with the banning of DDT their population has surged. Eagles continue to adapt to a human dominated habitat and in some areas even nest near busy highways such as this pair in Pennsylvania that has a live feed eagle-cam. 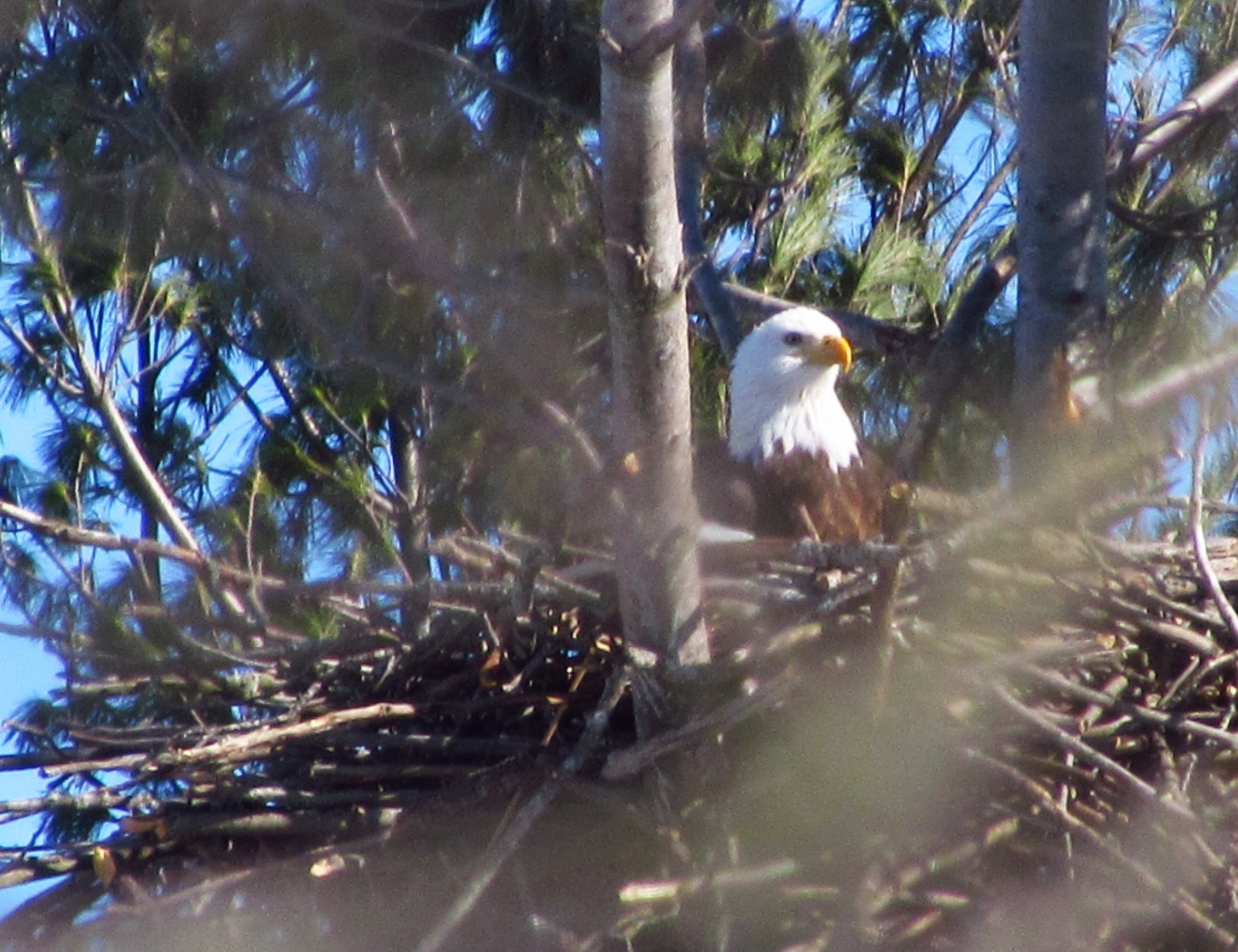 Today there are approximately 800 pairs of bald eagles nesting in Michigan alone, and thousands more across the country. Oakland County has hundreds of lakes that offer fishing to eagles, and just perhaps another pair will set up housekeeping in our midst. For detailed information on bald eagles in the Midwest, view this link from the U.S. Fish and Wildlife Service and keep an eye on the sky for our national emblem as you hike and explore on the Wilder Side of Oakland County.