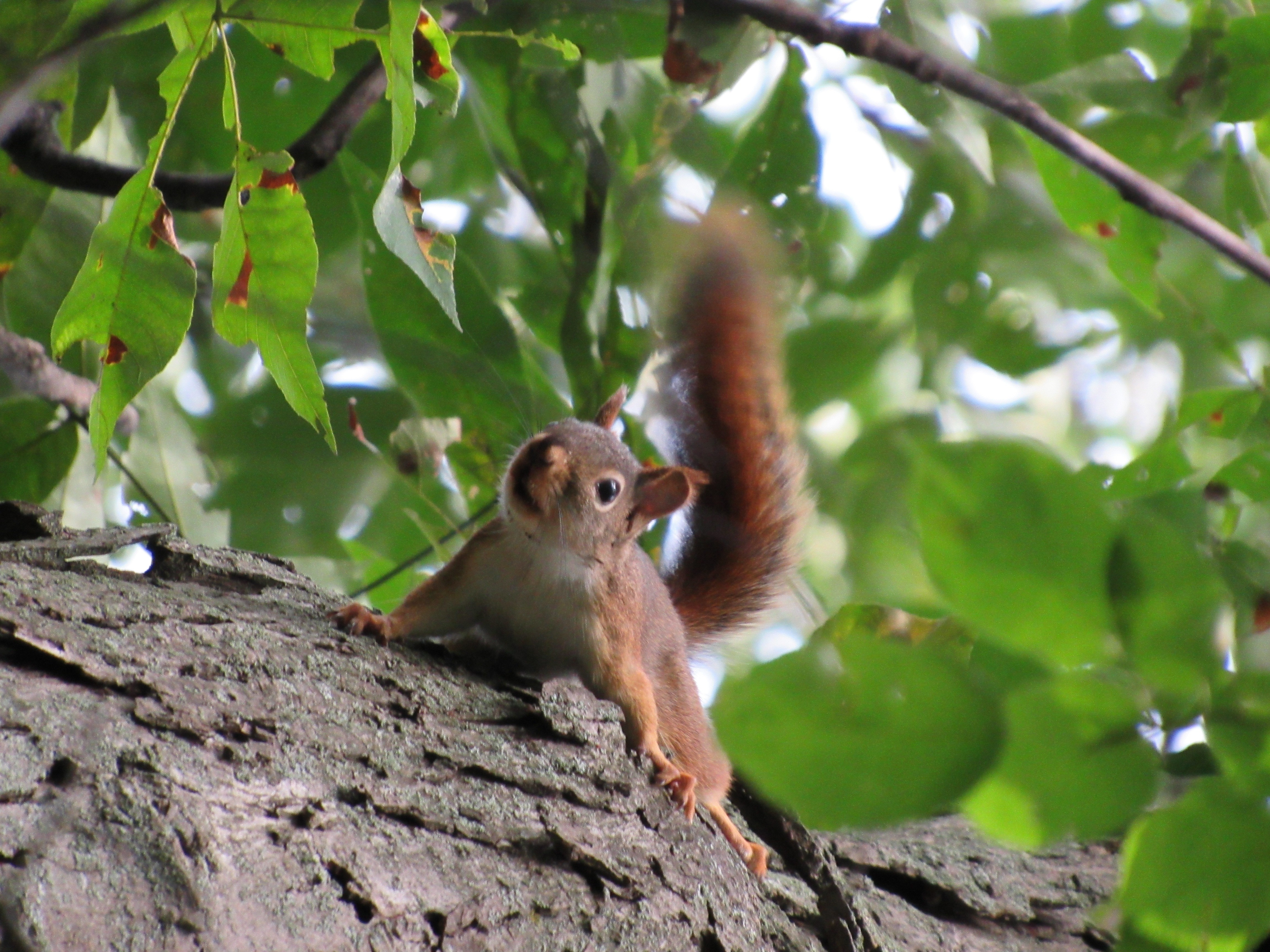 There is nothing shy about the Eastern Red Squirrel (Tamiasciurus hudsonicus), the smallest of our native tree squirrels. Now as summer fades, it’s full speed ahead for this rusty-red fur, white belly, endless energy, tail-flicking creature of the trees! Armed with an attitude of conspicuous confidence and extremely loud chatter, these colorful characters do not hesitate to charge at invading gray squirrels twice their size saying, “My tree! My nuts! Back off!”

If a human meanders too near the Red Squirrels favorite nut tree the red squirrel may glare down from a tree branch or cling to the trunk with the bushy tail up, screeching a chattering protest. It was this persistent territorial intrusion behavior of one Red Squirrel in Northern Oakland County that lasted over a minute that drew my attention. Armed with my camera and curiosity I went in for a closer look.

The squirrel continued to vocalize from the side of the large Shagbark Hickory tree as I circled around the trunk looking up. Looking down, the squirrel followed my every move, and then I noticed what was being defended stashed away in a large cavity of the tree. From the ground they looked like green eggs, but a quick zooming in with the telephoto lens revealed this squirrel’s cache of yet to be husked hickory nuts. Near the base of the tree on a glacial erratic that served as the squirrel’s dining table were remnants of freshly chewed nuts. The evidence showed an undeniable similarity to human behavior when we gather berries in summer. Most berries are placed in a bucket to be transported home, but everyone samples some during the harvest process. The Red Squirrel is no exception and samples some of its nut bounty.

Red squirrels are omnivores eating a wide assortment of nuts, berries, cones, seeds, insects, mushrooms, bird eggs and even nestlings, but with daylight shortening they know it’s time to stock up. They do not hibernate and much of late summer and early autumn is spent gathering tree nuts and evergreen cones to hoard away for the harsh months of winter. Some of these caches are inside hollow trees, others are underground in small burrows they will later reach by tunneling under the snow, and some are hidden in plain sight above ground, such as the cache this squirrel, squirreled away — and then exposed through his persistent chatter.

Red Squirrels are found in all 13 Oakland County Parks with their brazen behavior and loud chatter giving away their locations. An early morning late summer hike is perfect to look and listen for our beautiful little tree squirrels with the loud boisterous voice.

11 thoughts on “Red Squirrels: Cache Masters of the Trees”