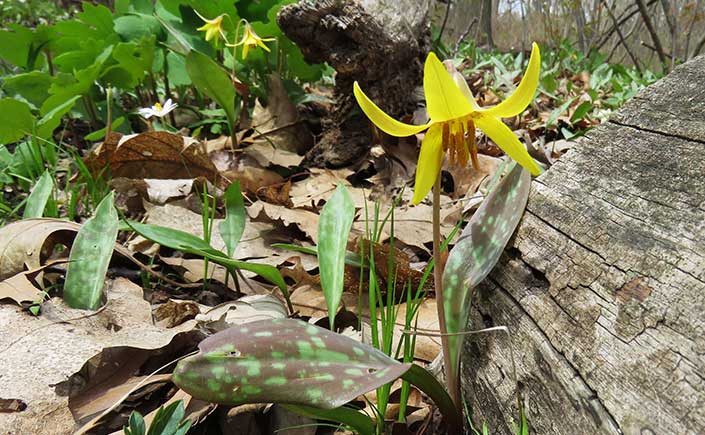 They emerged right on schedule in the small window of time that starts soon after wild turkeys began to gobble, but will end before trees leaf out, creating patterns of dappled sunlight on the forest floor. For that’s the way it is for ephemeral wildflowers that add spectacular beauty to the woodlands of Oakland County. This year I did not miss the spectacular and still ongoing southern Oakland County show.

Signs of spring creep slowly but steadily from the southern end of our county to the ever so slightly colder and higher elevation of the more heavily wooded northern hills of Oakland County. With that in mind, last Saturday I headed to Tenhave Woods in the highly developed “flatlands” of the City of Royal Oak in the southern part of our county to greet the wildflowers of early spring that thrive in our midst. The word ephemeral, meaning transient, fleeting, or short-lived is almost always used when describing early spring woodland wildflowers. Their delicate blossoms don’t last long, but their appearance signifies that spring is firmly entrenched. 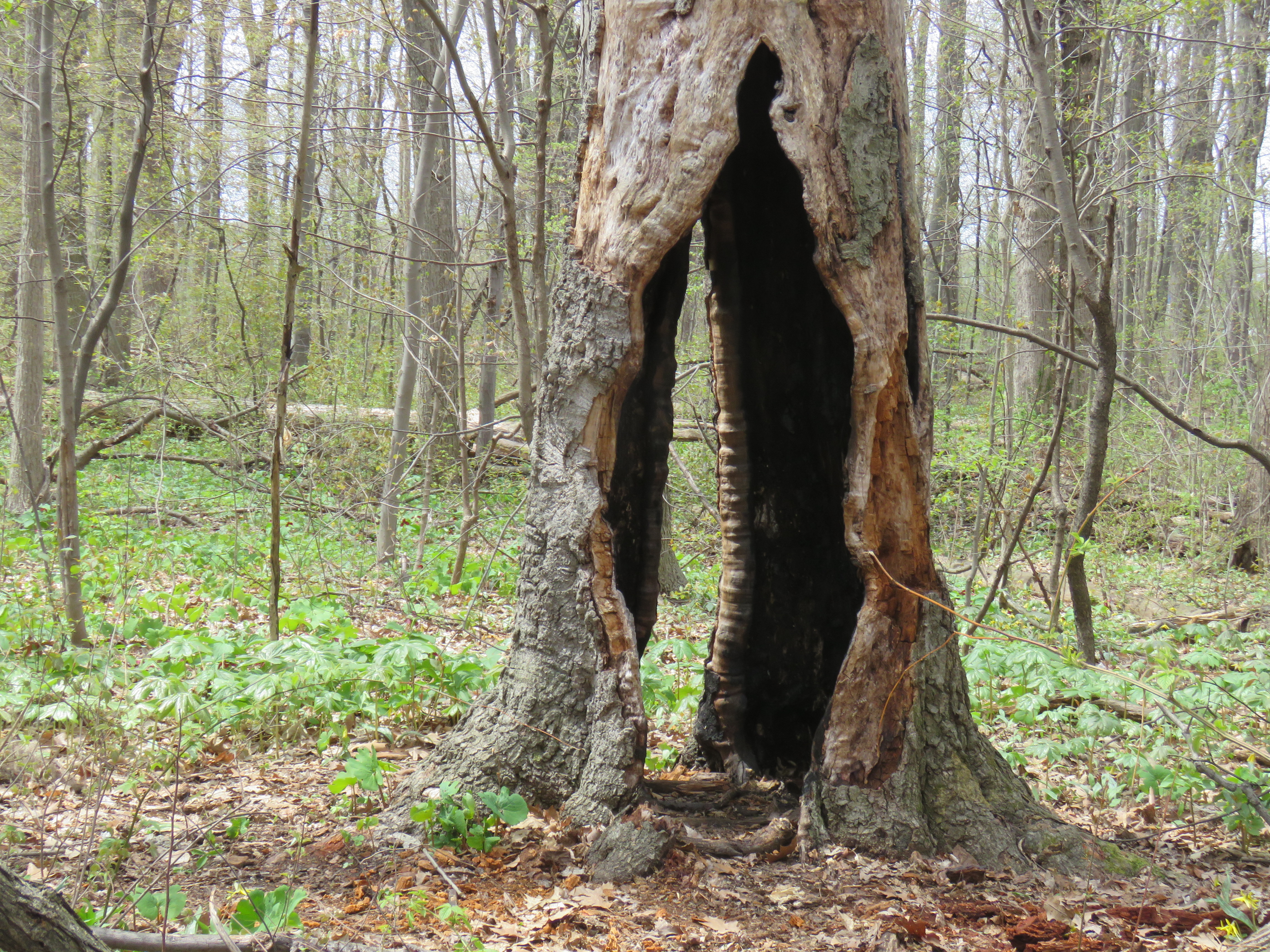 I usually prefer hiking alone, or sometimes just with a friend, so the chatter of a boisterous group does not distract me from nature’s ever changing subtleties. This time it was different, for I read that the Royal Oak Nature Society was leading a flower walk in search of ephemeral wildflowers at Tenhave Woods and was being led by an old naturalist friend, Bob Muller, the Program Director of the Royal Oak Nature Society. Muller reminded me that Tenhave Woods are remnants of an original settlers farm from 1824 and that the land was never clear cut. He added, “Tenhave Woods gives us the best view of what the land was like before settlers arrived and changed the natural environment.” That was all the encouragement I needed to head south.

Tenhave Woods is a 22-acre heavily wooded, fenced in nature preserve that was designated by the City of Royal Oak as a conservancy park, a place where the protection and management of the animal and plant life in the parks is the primary concern. Pets and collecting are not allowed, and visitors are urged to stay on the primitive natural surface trails. The woods are open daily to the public from dawn to dusk and visitors enter through a turnstile located just a few hundred feet east from the corner of Lexington Blvd and Marias Ave. I parked in the high school lot on the northwest side of that corner and followed the signs to the almost hidden entrance.

The Royal Oak Nature Society is a non-profit, volunteer citizens group working with the city to protect the management of Royal Oak’s two nature preserves, Tenhave Woods and Cummingston Park. Their mission is to “foster the awareness and usage of these natural areas by maintaining and promoting recreational and educational opportunities within them.” 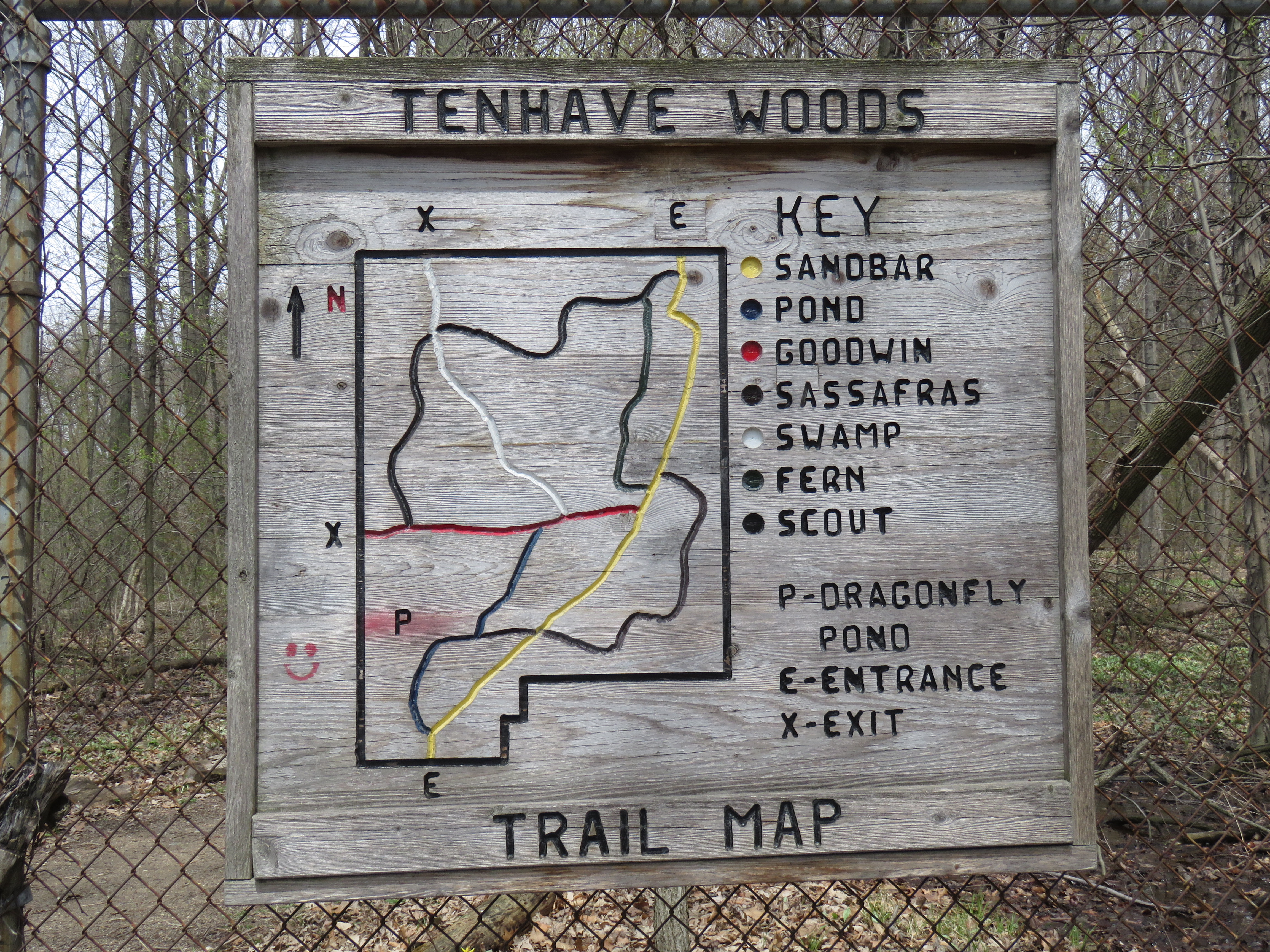 I arrived on site almost an hour before the guided walk began to follow my well-entrenched walk alone, stop often, look and listen practice to capture close up images, including one I would later caption, “Best Friends Forever,” of a bloodroot and yellow trout lily emerging side by side. A lone Mallard Duck seemed to follow my practice of solo and silent hikes and remained motionless and silent at a small pond within the sanctuary.

At the appointed time, a few dozen others and I began our search for wildflowers under the leadership of Muller. Great carpets of Trout Lily (Erythronium americanum), a yellow-blossomed wildflower easily recognized by its brown-mottled green leaves and “nodding” blossoms that face downward greeted us. They numbered in the thousands. The habitat was perfect for these delicate beauties that must receive ample sunlight in most deciduous woods to bloom before the tree canopy fills in. The name Trout Lily refers to the markings on the leaf that bear a casual resemblance to the patterns of the sides of brook trout. Trout Lily goes by three other names, with one being Dogtooth Violet, a reference to the shape of its underground bulb. Another name that I especially like for it is Spotted Adders Tongue, something of a stretch of the imagination, but some think the leaves look like spots on snake tongues. I have also heard this beauty called a “Fawn Lily,” a reference to its mottled pattern, not unlike the spotted pattern on fawns.

Bloodroot (Sanguinaria canadensis) was far less common than trout lily, but this strange and wonderful wildflower, with a rich history of fact and folklore, including uses in homeopathic medicines, was easy to identify. As the plant begins to poke up through the moist soil, each bud is protected by a single large leaf that is wrapped around the flower bud in a shawl like fashion. Once it’s several inches tall, the leaf unfolds and a pure white, short-lived blossom appears. As for the name bloodroot, if the underground reddish-orange rhizome is cut, it oozes a bright reddish sap that also led to its Latin name “sanguinaria” which is derived from the Latin word sanguis, meaning blood.

The Eastern Spring Beauty (Claytonia virginica) is one of earliest emerging spring wildflowers and it always appears before any trees leaf out. Sometimes it appears singularly, other times in sizable mats, but the tiny pink stripes on the delicate petals help in identification. In his classic book Stalking The Wild Asparagus, the early 60s wild food advocate Euell Gibbons wrote in reference to spring beauties: “We tried them fried, mashed, in salads, and cooked with peas, like new potatoes. All these ways were completely successful, but, as regular fare, we preferred them just boiled ‘in the jackets.’ “ I have sampled them in my own woods, but bear in mind the Royal Oak Police would more than frown on foraging in the protected woodlands of Tenhave Woods.

I was excited to see a small cluster of Dutchman’s Breeches (Dicentra cucullaria), a species I have rarely seen in Oakland County. They resemble a pair of pantaloons hanging upside down and the flowers wilt almost immediately upon picking so they should not be collected in the wild. A literature search revealed that this species is found most often in woodlands that have never been plowed under or bulldozed over, such as Tenhave Woods. 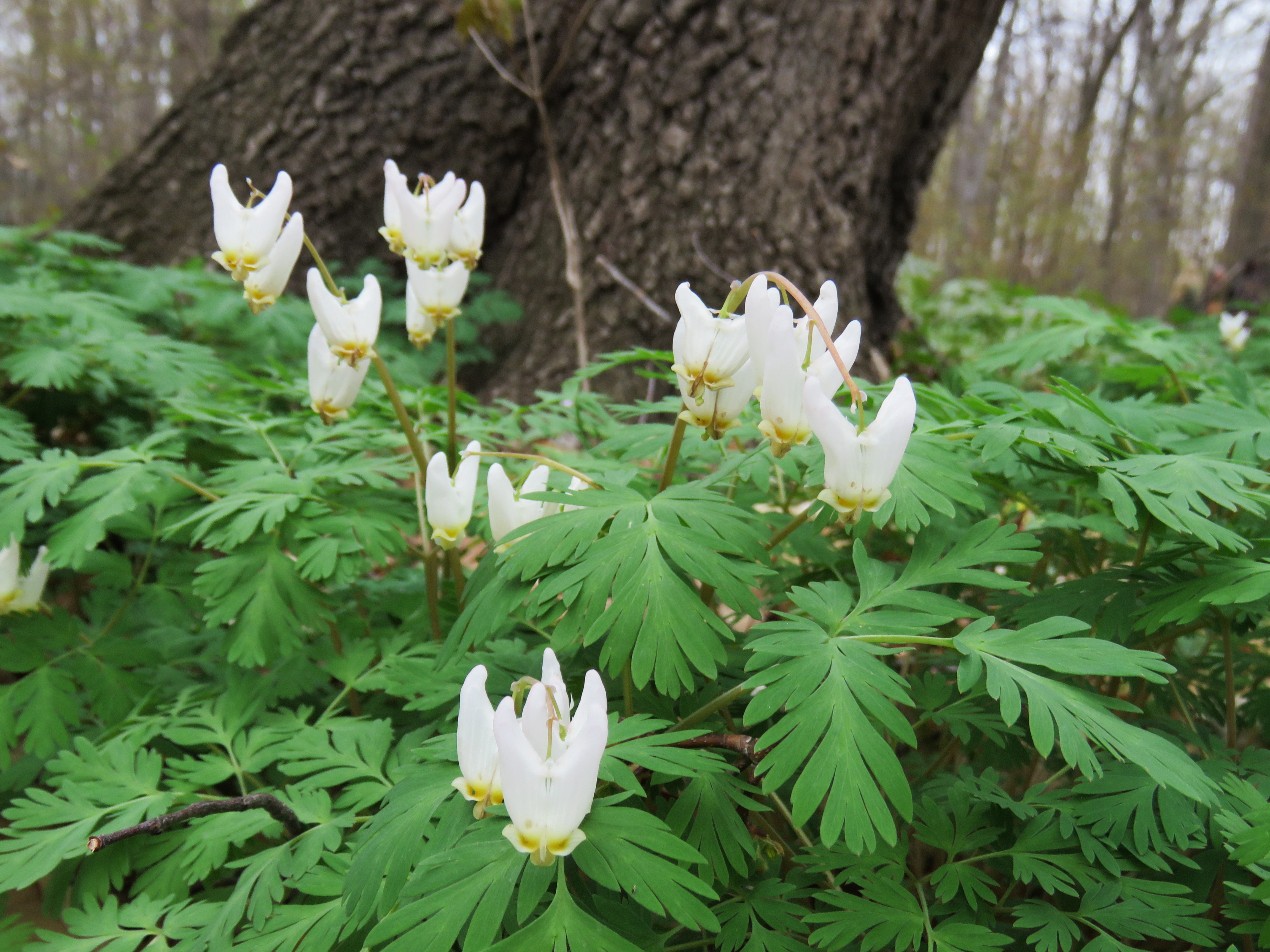 Red Trillium (Trillium erectum) usually flowers before White Trillium, as was the case at Tenhave woods. Red Trillium is a truly spectacular, but the blossoms of this ephemeral are often hidden from view since they are on recurved pedicels requiring one to lie down on the ground and aim the lens upwards, or gently lift the blossom up to have it “pose” for a photo. The flower is also known by the name “Stinking Benjamin” for its alleged foul odor. I say alleged since to me it just smells a bit musty. The flowers exude an odor that attract flies and carrion beetles that aid in pollination.

White Trillium (Trillium grandiflorum) was just beginning to blossom amidst the downed trees that offer nutrients and shelter. My friend Mark S. Carlson, a skilled photographer and naturalist, wrote these words about white trillium in one of his blogs back in 2013, “Its elegant and stately three-petal white blossom is the star attraction of the late April to early June deciduous hardwoods. It often forms large colonies in beech-maple to oak-hickory forests, where it grows in a colorful mixture of other springtime ephemerals.” His eloquent words need no addition from me, and my words of today are inadequate to fully describe the ephemeral beauty of Tenhave Woods, a remnant of Oakland County’s “wild nature” in the southern reaches of our county.

Every now and then, I wandered away from the group to see what else I could find and stumbled across a single Downy Yellow Violet (Viola pubescens). This delicate wild violet has 5 yellow petals with tiny brownish lines on the lower petal. While kneeling to take a photo, I noticed a splash of red partially hidden by leaves that looked like a fresh bloodstain. Gently pushing the dried leaves aside I was rewarded with seeing one of the earliest harbingers of spring, the Scarlet Cup (Sarcoscypha coccinea), a stunning mushroom with a brilliant crimson hue. And just inches from that were fiddleheads, the furled fronds of just emerging ferns, a perfect wrap up to an urban adventure in a remnant of the wilder side of Oakland County.

NOTE: Visit Royal Oak’s website to discover more about the work of the Royal Oak Nature Society work and their upcoming public nature walks. Additional historic information can be found by clicking HERE.