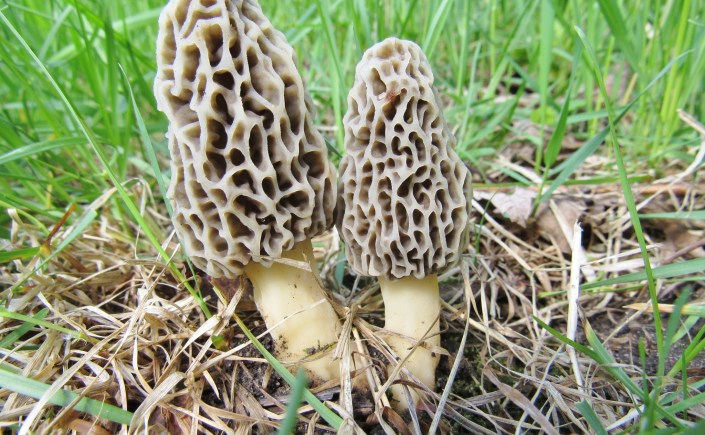 “April showers bring May flowers.” We heard that saying frequently when the spring rains came and crocuses and daffodils bloomed. April showers, however, bring more than May flowers. They create ideal emergence conditions for morel mushrooms (Morchella esculenta).

In this blog post, Magnificent Morels of May, readers will be introduced to the basics of morels and morel hunting, with a word of necessary caution: never consume any wild fungus unless you know its identity and edibility with 100 percent certainty. Although all of the accompanying photos show morel mushrooms, there is a great variation in the color and size of individual specimens. Some morels are so large you could insert a smaller one inside as an eye-catching photo opportunity!

Morels are perhaps the best known wild mushroom of the midwest, and every May they are hunted by hundreds of thousands of pros and novices. If you are new to hunting for morels, the second edition of Mushrooms of the Upper Midwest by Teresa Marrone and Kathy Yerich should be your companion. It’s a superb guide with excellent color photos of common mushrooms of our region, coupled with useful information on identification tips. It also describes poisonous mushrooms that might be encountered.

Mother Nature has awakened from her winter slumber and morels are about to appear in the woodlands of Oakland County. Some may have already pushed up through the leafy cover of the forest floor. They began emerging over a week ago in large swaths of Indiana and Ohio and southernmost parts of Michigan. My prediction is they will be at peak appearance in less than two weeks across Oakland County and keep appearing well into the month.

I’ll share a secret as to timing. I usually find them in Brandon Township, my part of Oakland County, when my lilacs begin to bloom. That does not mean, however, that lilacs blooming in Southfield confirm morels are emerging in Brandon Township, the northernmost part of our county. But I believe that lilacs and morels respond to similar conditions and timing. Keep in mind that morels are habitat specialists and won’t grow just anywhere. It’s all about habitat, soil temperature, and moisture conditions. Morels thrive in healthy moist environments when the air temperatures is in the 60s and surface soil temperatures climb into the 50s. They might also be a bit finicky about their first appearance, and just a small amount of temperature variations can make all the difference in having a successful morel hunt.

I’ve been hunting morels for about ten years and there is a reason I always look for them in locations where I found them previously. That reason is as simple as understanding an apple’s relation to the apple tree—and knowing what mycelium means. The ‘mushroom’ we gather is the fruit of the mycelium, the hidden part of the fungi that’s underground. Consider the morel you see as ‘the apple’ and the hidden mycelium ‘the tree.’

We eat the sporophore, the above ground reproductive part, but the words sautéed mushrooms sounds a lot tastier than sautéed sporophores. The mycelium, a threadlike structure, is the main part of a mushroom. The mycelium makes up the majority of the fungus and sometimes stretches underground for yards. The mushrooms are simply the fruit it produces when it’s ready to reproduce.

Gathering morels is not as simple as walking to a garden to pick tomatoes. Morels are pros at hiding in plain sight. Sometimes they emerge next to early spring wildflowers, and sometimes next to poison ivy, as I have discovered. My hunt this May will take me to the Bald Mountain and Ortonville State Recreation Areas and to a site in my field with old apple trees. Orchard habitat seems to always be good morel hunting ground.

I like wandering woodlands any time of the year but trekking the woodlands of early May when hepatica and spring beauties are flowering is a special treat, even if morels are not found. Sometimes I wander alone, and sometimes I wander with a companion who shares my passion for the ways of the wild and the secrets of nature’s way. She too is a mycophile—a devotee of woodland fungi. Hunting with an equally passionate forager partner makes it more fun, and having two pairs of eyes searching increases the chances of success.

If you are new to the adventure of searching for morels, follow a cardinal rule: if you do not know what it is, leave it be, and never mix unknown species with morels in your collection bag.

The Cadillac Visitors Bureau also states that the Manistee National Forest and Pere Marquette State Forest are excellent places to hunt for morels. They are, but if you really want to dive into the world of morels and have fun with others, consider heading to the Mesick Mushroom Festival, which takes place the second weekend of May. That small Michigan town bills themselves as the mushroom capital of the United States.

Ready to hunt for morels? Most state-owned woodlands and county parks in Michigan allow collecting. State recreation lands in southeast Michigan are a great place to forage. Morels may appears singularly, in small groups or large clusters. In addition to finding them in woodlands, they are often discovered in old orchards, under apple trees and near dead elm trees.

However, unlike some fungi, they never grow on decaying wood or out of dead trees. Morels also tend to appear the year after a fast-moving woodland or field fire. I keep track of prescribed fires in our park systems and sometimes return to those areas the following May.

When collecting, do not pull them out of the ground. Cut the stem at ground level with a knife. Remember, you are just collecting the fruit of the fungus, not the thread-like underground mycelium.

There’s a wealth of information online on ways to prepare morels. However, there is less information about what you need to do before preparing for consumption. Remember this and you will do just fine: never eat a morel raw and only eat fresh, young, cooked ones with no sign of damage. If you see tiny holes in the stem or other obvious damage, just leave it in the woods to spread its spores. You also should always slice it lengthwise down the middle before cooking. The hollow stem is a great hideout for tiny creatures. Rinse the sliced mushroom or soak it in water and any stowaways will exit. I keep it simple and sauté mine but sometimes add wild leeks to spice things up. Wild asparagus often appears at the same time morels emerge, and sometimes I will prepare them together as a two-for-one treat from nature’s way.

Although Oakland County’s prime morel season will slow down or perhaps wrap up entirely by the end of May, in northern parts of Michigan it will just be getting underway. I’m excited I will have a second chance to hunt morels this year. In the last week of May, I return to Sleeping Bear Dunes National Lakeshore’s South Manitou Island for my fifth tour of duty as their lighthouse keeper. I have my secret morel hunting location a short woodland walk from the lighthouse, and morels will hopefully once again be part of my first island omelet the morning after I arrive. I will stay on the island for the month of June and keep looking for morels as long as I keep finding them.

My all-time favorite morel encounter also occurred on South Manitou, and I was excited to be carrying my camera at the time. I was walking the shoreline on the lookout for Piping Plovers, a small, federally-protected, endangered shorebird that nests on the island. That morning meander included discovering one lone morel that had emerged in a most unlikely location, the sun-soaked sandy shoreline of Crescent Bay, an attractive site for Piping Plovers. I left that lonely morel in its beautiful location to keep the plovers company.

One thought on “Magnificent Morels of May!”