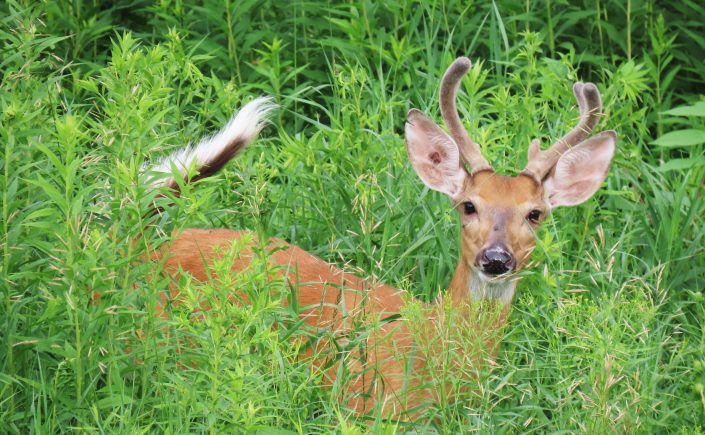 White-tailed deer are the smallest members of the deer family, which include moose and elk, but without a doubt, they are the largest and one of the most frequently seen mammals of Oakland County. Love them or hate them, they are here to stay. Our diverse natural habitats, landscaping practices, and travel corridors gift them with an abundant food supply, places to take shelter, and the opportunity to leisurely graze on a great variety of seasonally changing wild plants and fruits, including leaves, grasses, forbs, fiddleheads, mushrooms, acorns, twigs, nuts, wild fruits, and at times, our vegetable and flower gardens, and farm crops.

They are adaptable creatures and face little in the ways of predation with perhaps the exception of the eastern coyote taking the occasional fawn or an injured deer. They use speed and agility to outrun predators and escape perceived threats. They can also sprint up to 30 miles per hour, leap over eight feet to clear a fence, and cover almost 30 feet in a single bound. The white-tailed deer’s distinctive white tail and white rump patch is clearly visible when they bound away from real or perceived danger, thus its name, white-tailed deer.

Thousands of deer face deadly encounters with automobiles each year or meet their end during hunting season. Oakland County has close to 2,000 deer-vehicle encounters each year and the Michigan State Police website states:

“While the state’s two million deer are most active in spring and fall, vehicle-deer crashes are a year-round problem. Each year, there are nearly 50,000 reported vehicle-deer crashes in Michigan. About 80 percent of these crashes occur on two-lane roads between dusk and dawn.”

Statistics and safety concerns aside, deer are fascinating creatures to watch through the seasons. As summer slowly wanes, bucks “in velvet” become more restless and increasingly roam the meadows and woodlands of our county. It’s also the time my restless camera lens searches for them.

I noted that during the last weeks of August, their meanderings and travel routes seemed to change, but they still appeared in “bachelor groups.” With the arrival of September, it is still not uncommon to see antlered bucks of various sizes and ages feeding together in orchards, or at times in lush flower meadows as I often witness just a few hundred feet from my house. That will all change soon as bucks go their separate ways and their antlers give clues to behavioral patterns.

I began to take notice of antler growth a few months ago and then seemingly overnight, the white-tailed bucks that roam my meadow had impressively large velvet coated antlers. Antlers, which are made of bone, are one of the fastest growing tissues in the entire animal kingdom. Most science-based sources place the growth rate of antlers as close to a quarter inch per day if the deer is healthy and has an excellent food supply.

As most nature-watchers notice, the whitetail deer’s antlers are presently covered in a very fine, soft, and furry appearing membrane. The membrane, known as velvet, offers a degree of protection to the growing antlers that are fueled by a rich supply of blood and nutrients from veins that run on the outside of the antlers. Contrary to myth, the size of the antlers and the number of points are not indicators of the age of the deer. It’s the health of the deer and the abundance of nutritious foods that determine the size of the antlers. The wilds and suburbs of our county have superb food sources and as a result, Oakland County has bucks with large antlers, often referred to as “racks” by the hunting community.

In the summer, “living is easy” for the bucks, does, and fawns of our county. Autumn brings changes that are most noticeable in the bucks. Testosterone levels begin to rise as the hours of daylight diminish, which initiates the process of hardening of the antlers. The “velvet” is no longer fed by blood and the velvet dries rapidly. Nature-savvy hikers often notice buck rubs in woodlands where bucks used saplings and young trees to rub off the dry velvet and at the same time, scent mark their territory. Buck rubs also leave visual markings that declare their presence to other bucks, and perhaps that action adds strength to a buck’s neck and shoulder muscles. One of my trail cameras captured that process.

Deer rut is their mating season and corresponds with the time that does come into estrus. It’s also the season bucks and does dart out into traffic more often, seeming less cognizant of everything around them. Rutting behavior accelerates around the time that the color change in trees is obvious and includes sparring among the bucks that are usually rather low-intensity, short lived matches. When the “rut is on,” a phrase used mostly by hunters, bucks throw all caution to the wind and full blown fights between the bucks occur, creating audible noise when the antlers crash together.

As the lush vegetation of summer turns brown and crackly dry in late autumn, Oakland County deer turn their feeding attention to twigs, buds, and fallen tree nuts. In Oakland County, a county where oak trees are plentiful, acorns attract deer. They also begin to pay attention to bird feeders and seed spillage. It’s not at all unusual to see deer tracks near a feeder at dawn, and once deer are accustomed to a feeder site, daylight visits are likely.

Michigan winters can be challenging for deer during extended deep freezes and/or when extremely deep snow makes travel to feeding areas difficult. However, for the past few years, our winters have been exceedingly mild and deer just look for locations sheltered from the wind to bed down for the night. Many of these locations are in low areas near swamps and cedar woods located within our state recreation areas, county parks, Huron-Clinton Metroparks, and on nature center and nature conservancy lands. Winter is also a time their travels are easily noted by well-worn paths, especially if they bed down near an orchard. Mother Nature also provides them with thick new coats for winter, a grayish-brown coat with a thick undercoat that replaces the reddish-hued hair of summer. That coat has hollow hair, which allows air to be trapped. That design of nature functions almost like a multi-pane window, keeping warmth in and cold out.

Fawns are born during May, or very early June, after a gestation period of about 200 days. A doe may have a single fawn, twins, or triplets. Typically, does that are two years old or older are likely to have twins. My wildlife agency friends told me triplets are not rare, and I have photographed triplets several times over the years.

A healthy doe leaves her newborn fawns unattended for hours at a time. Sometimes the fawn is left very close to a house, causing great concern that it has been abandoned. It is not. When the fawn remains bedded and left alone, the natural camouflage of its spotted coat and its almost scentless condition effectively conceal it from predators. The doe returns at regular intervals so the fawn can nurse. After three to four weeks, the fawn starts to follow the doe on her forays for food and learns the secrets of life as a white-tailed deer and where the best food sources may be on the wilder side of Oakland County.