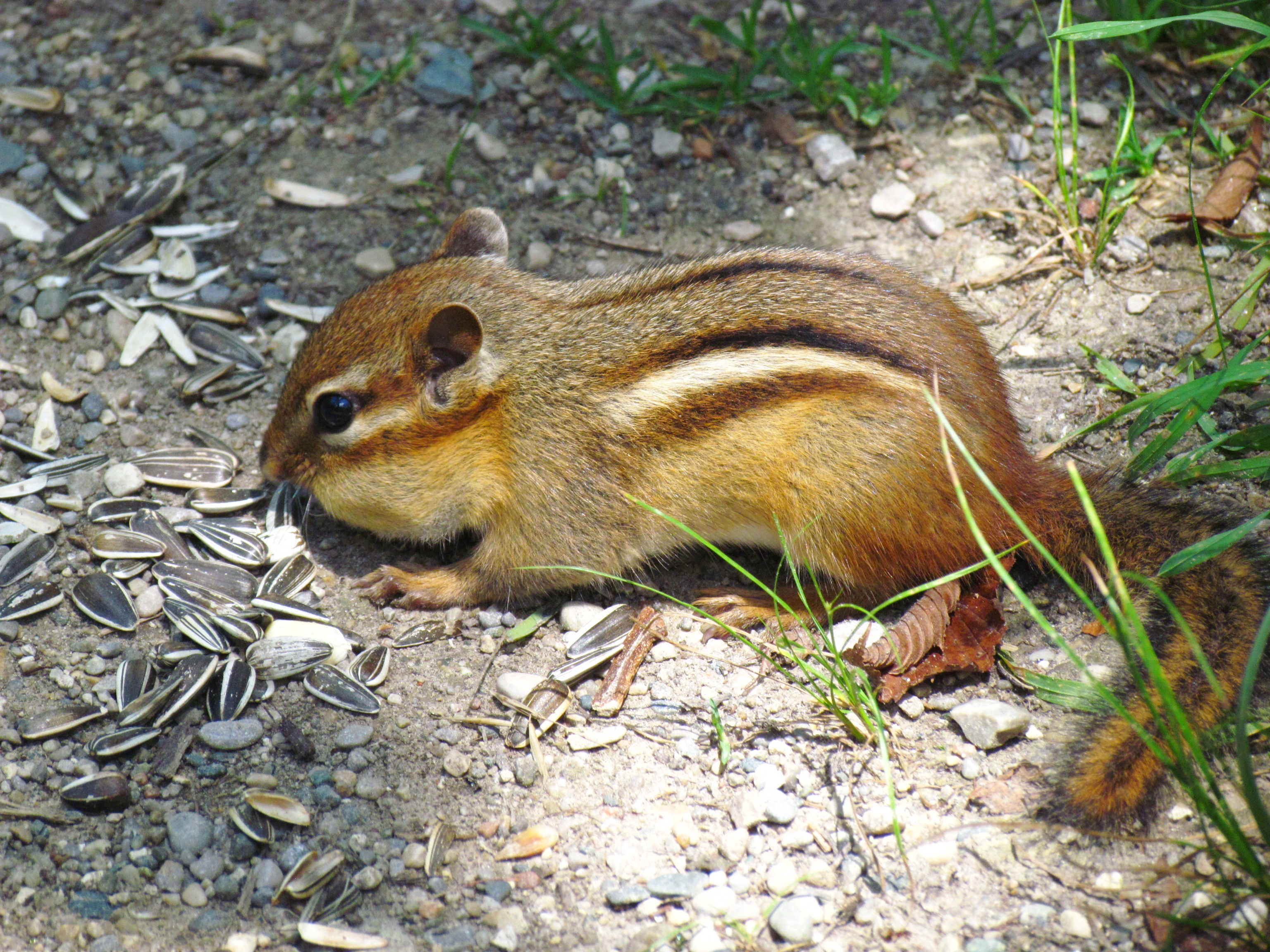 “The chipmunks are back!” That comment e-mailed to me, followed by a second sentence, “Where were they all winter?” inspired this chipmunk tale. The story starts with food. Unlike nectar sipping Ruby-throated Hummingbirds or our majestic fish-eating Osprey that fly thousands of miles to return to their breeding grounds in Oakland County, chipmunks just migrated about two feet when the snowflakes of November fell. Adaption is the key to survival for all species, and it’s all about the availability of food. Hummingbirds cannot store nectar, nor can Osprey store fresh fish so they flew south. Chipmunks can store nuts, but there’s more to this tale of vanishing chipmunks. 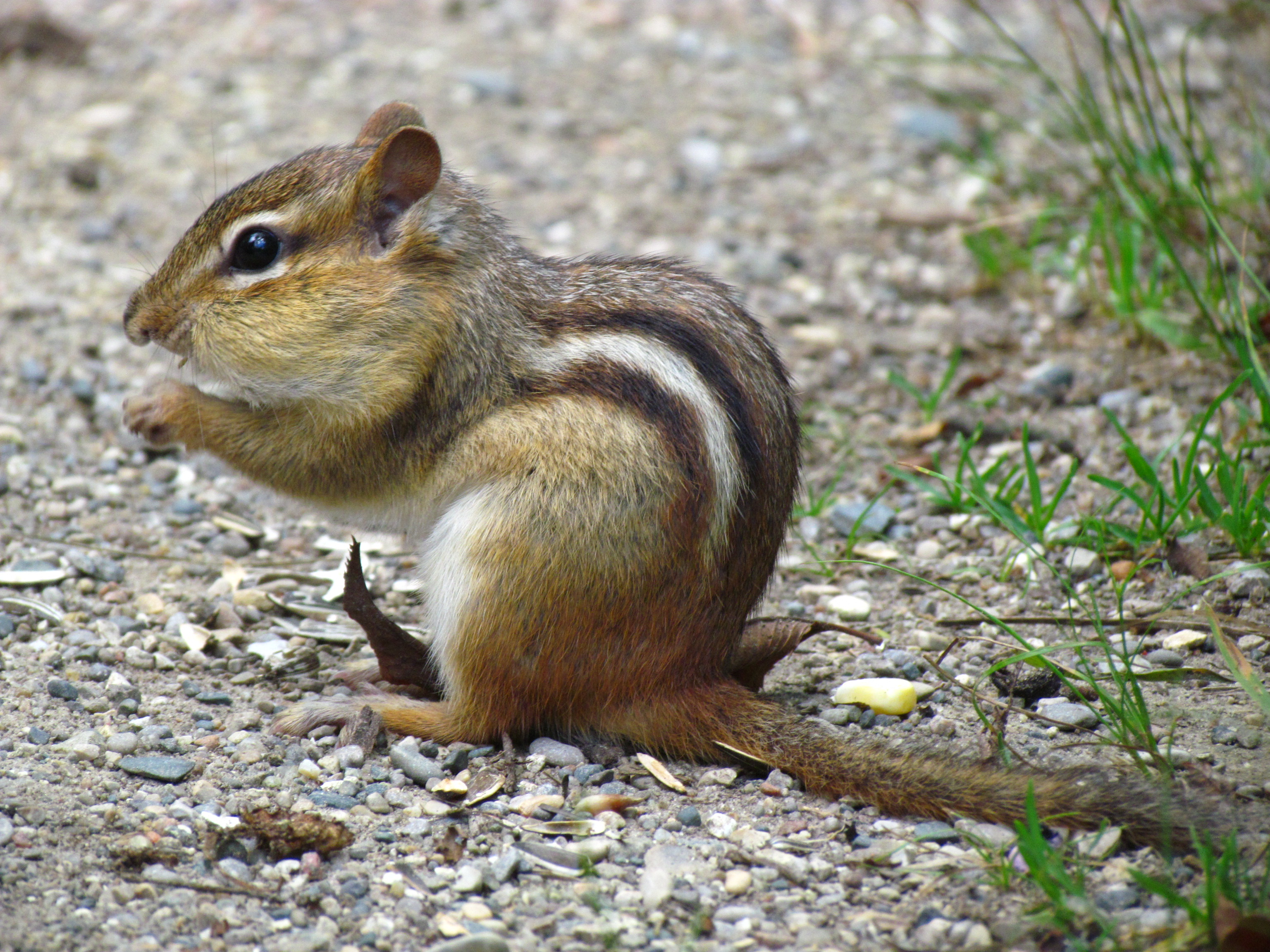 The answer to their winter disappearing act is disclosed by their late autumn behavior, and their style of hibernation. In autumn as sugar maple leaves turned to gold, and wildflowers wilted, they scurried about stuffing their expandable cheek pouches with acorns and other morsels of choice and then taking their “groceries” to underground storage sites. However, if the plan was to sleep all winter, there was no need to gather food. 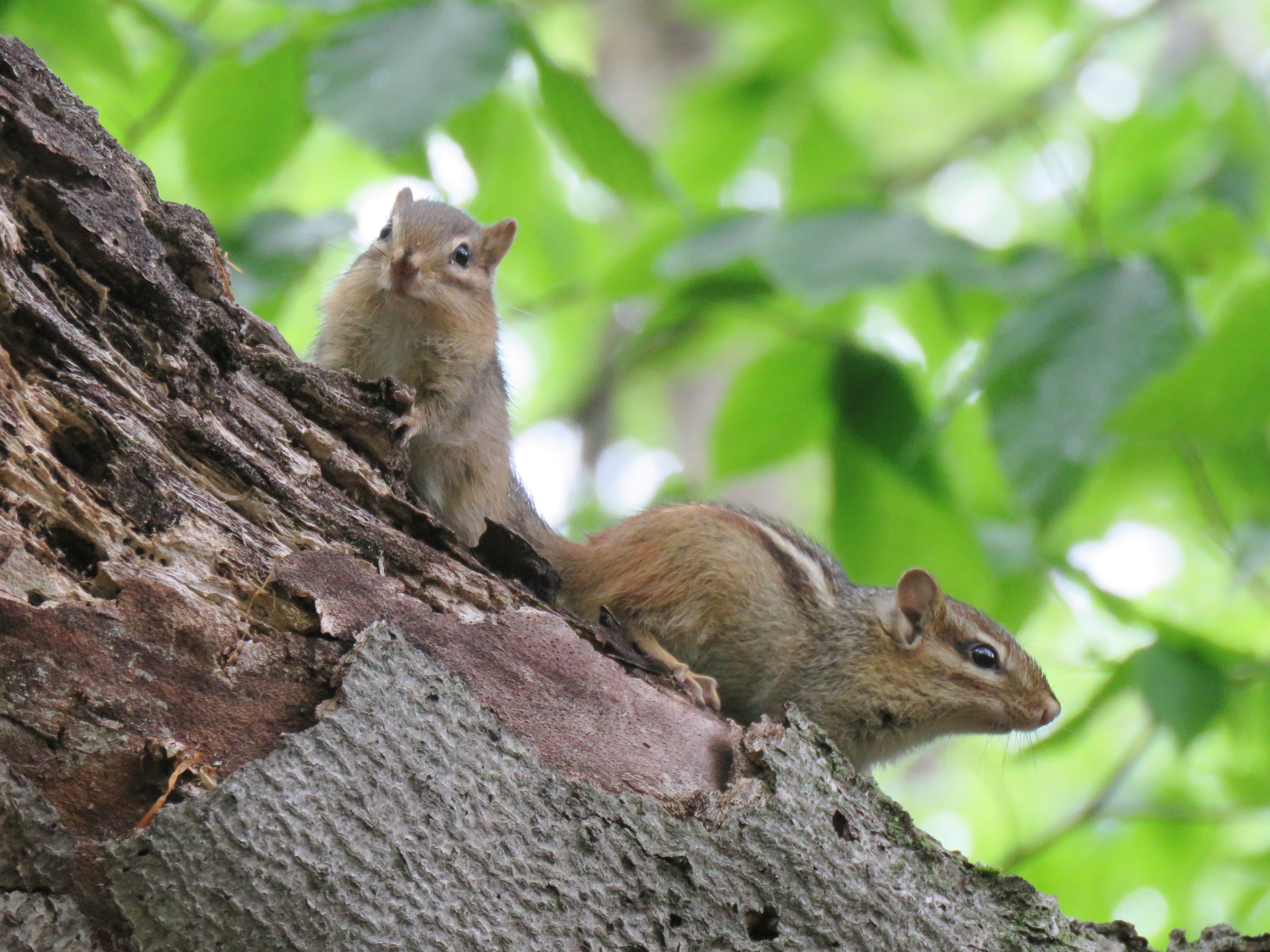 Chipmunks are not true hibernators. Chipmunks practice torpor and accumulate little body fat prior to the winter, unlike the similar appearing 13-lined ground squirrels that “pack the pounds on” and sleep the winter away. Torpor is a short-term reduction of body temperature driven by ambient temperatures and perhaps accelerated by the decrease in hours of daylight. During these periods of torpor both the respiratory and heart rates plummet which in turn decrease the need for food. Chipmunks planned ahead and filled parts of their labyrinth of tunnels with caches of seeds and nuts gathered before the first snow fell. About once a week, sometimes less often, sometimes more often, they stir about and snack on their bedside food supply. 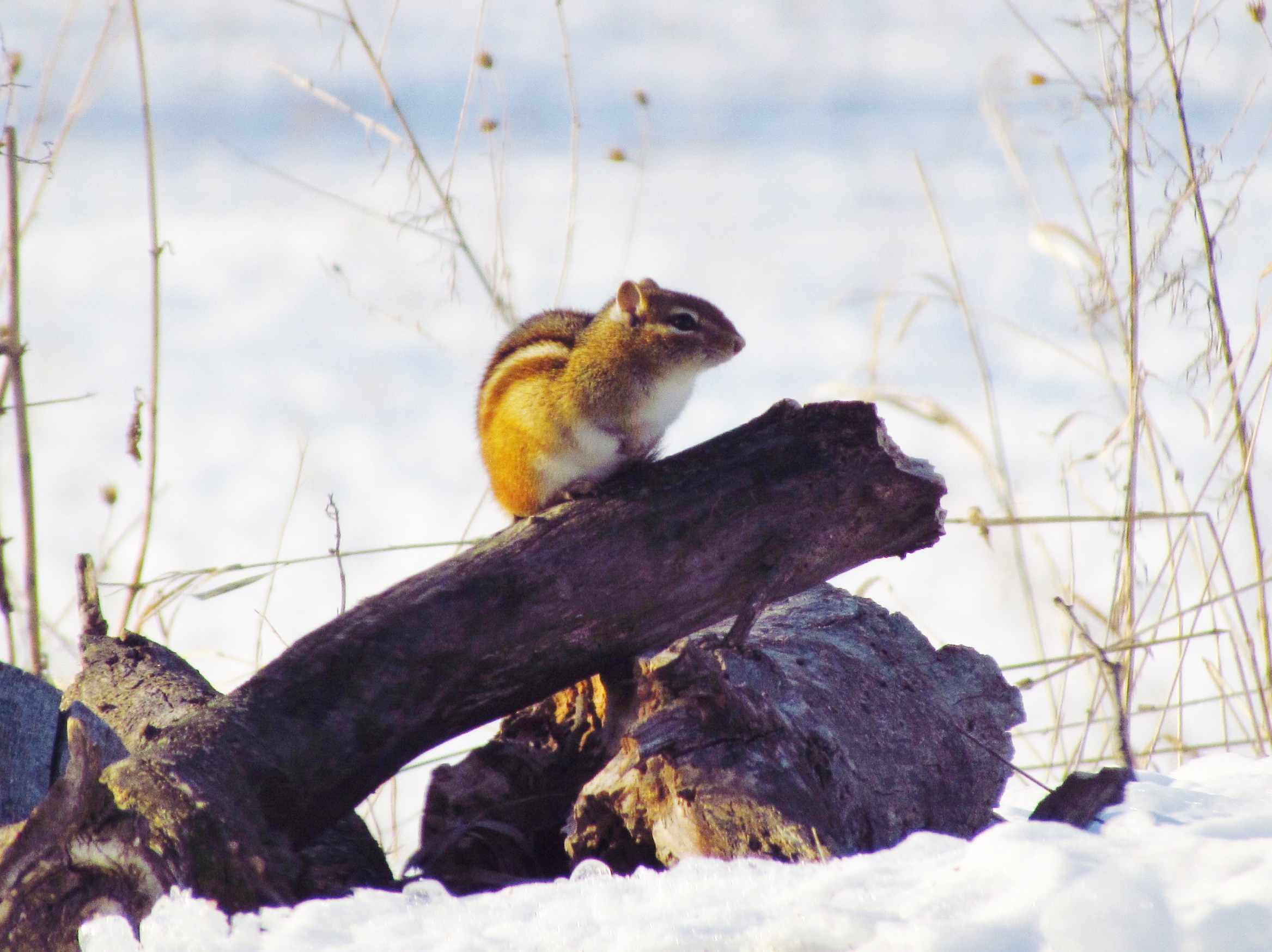 Sometimes they come topside during winter for a quick exploration, then back down for another long nap. Chipmunks, like modern day human ‘survivalists‘ also scatter food caches in other nearby underground sites, something of a fail-safe plan should the winter be long and deep with snow, or their cache is stolen or destroyed. 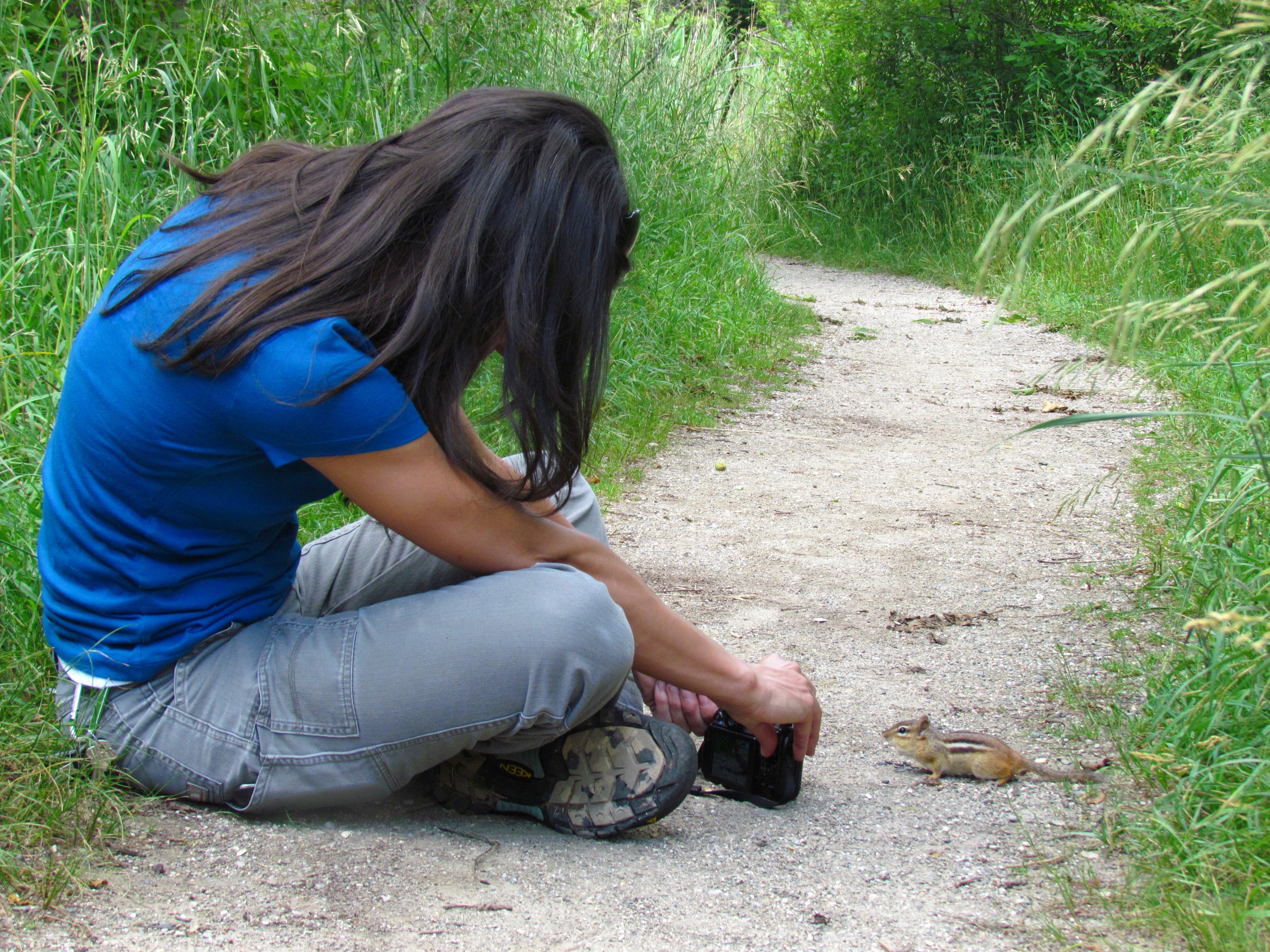 Chipmunks are eye-catching creatures. Hawks, raccoons, weasels, coyotes, foxes, feral cats, domestic cats, mink, great blue herons, and even big snakes all look for them. If they can see one, and can catch it, which is not always easy, they eat it. Children watch for them too and are fascinated by their boundless energy and undeniable cuteness factor.

Hikers and campers in the know watch them with wariness once they discover their boldness and ability to steal snacks from backpacks. On Michigan’s South Manitou Island, part of Sleeping Bear Dunes National Lakeshore, the national park rangers that patrol the island refer to their chipmunk population as “Manitou Tigers.” That light-hearted phrase is well-earned. Some of these human-behaving, savvy rusty-colored little rodents with a distinctive pattern of stripes, lurk near popular trailside viewing vantage points and wait. If a hiker sets down their pack, as I did at a lookout point above the Francisco Morazan shipwreck, the chipmunks execute their bold snatch-and-grab move with stealth and speed. I captured the photo. The chipmunk captured my snack stash. A fair trade. 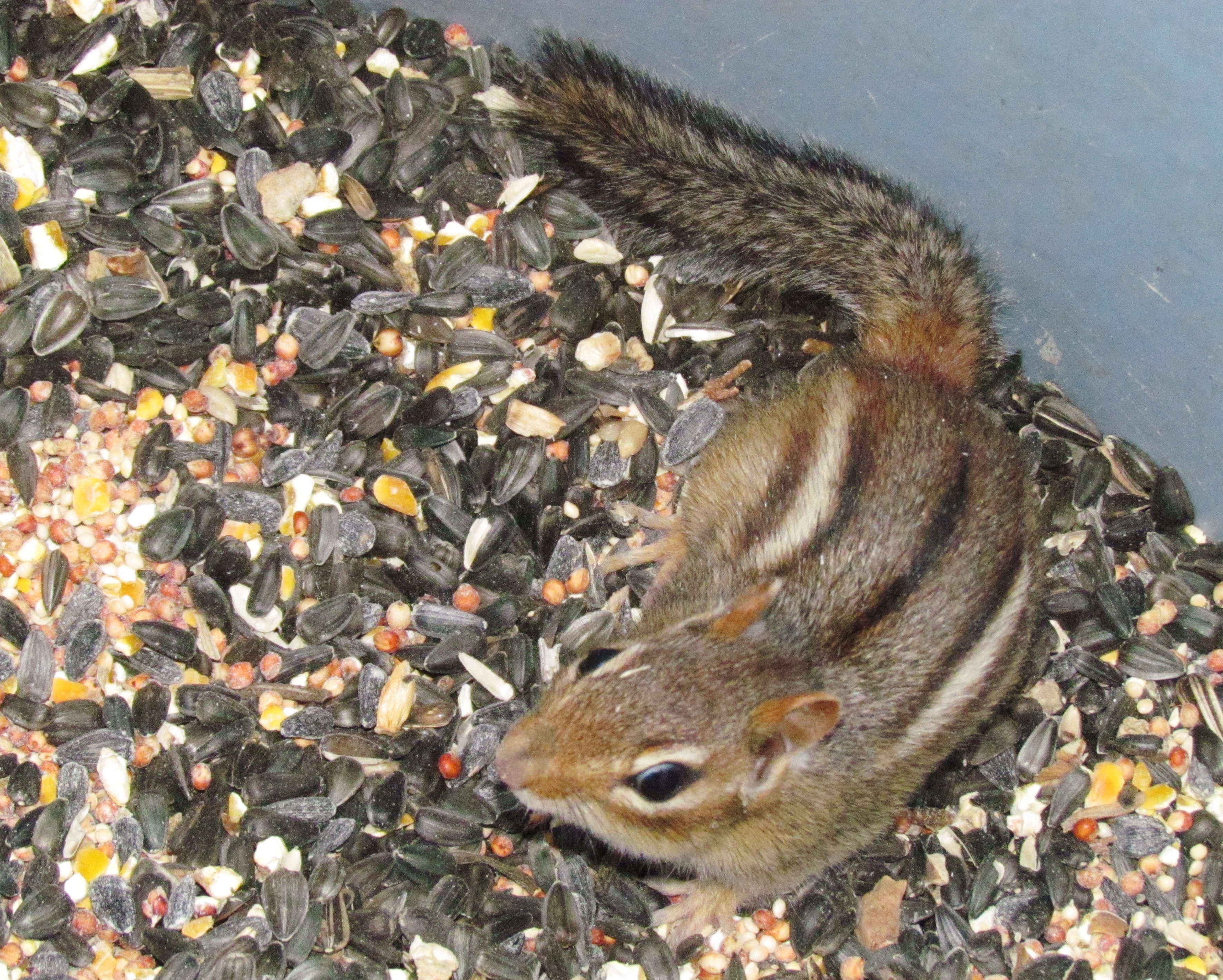 Oakland County chipmunks may not be as “ferocious” and skilled in food ambush techniques as the South Manitou chipmunks, but they are well adapted to life in our midst. In these early days of spring they are often seen stuffing their cheek pouches beneath overflowing suburban bird feeders or scurrying around, under and over fallen logs on the Wilder Side of Oakland County as they hunt for old acorns, fresh bugs, grubs and fungi to nibble on. 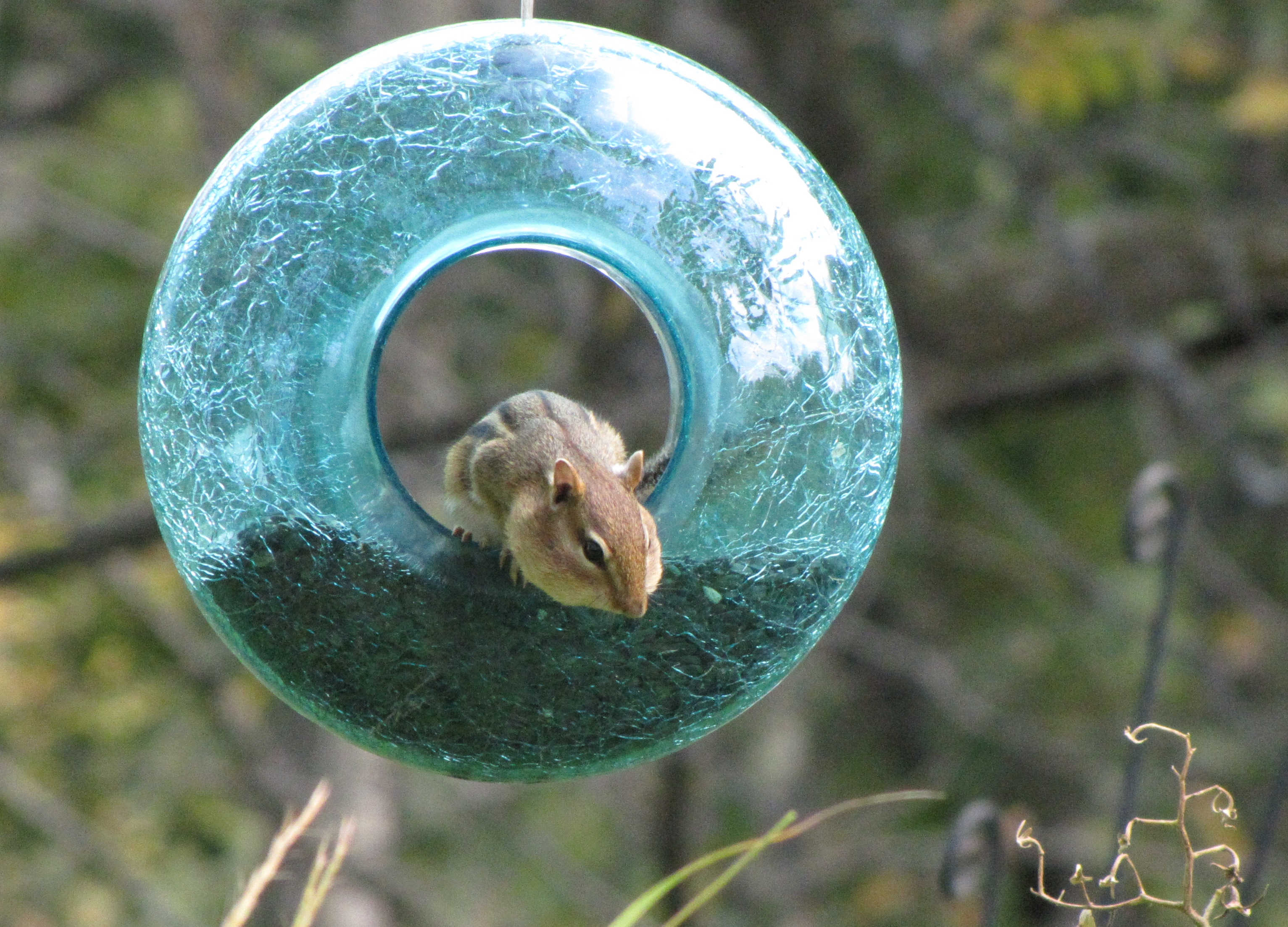 Spring is the time to breed and the gestation period is short. Females give birth underground just 30 days after mating. Another 30 days slip by before the eyes of the babies open. By the time they are four or five weeks old, they begin to leave the burrows to forage. Those early days topside are full of risk, but young chipmunks quickly became more aware and wary of dangers. 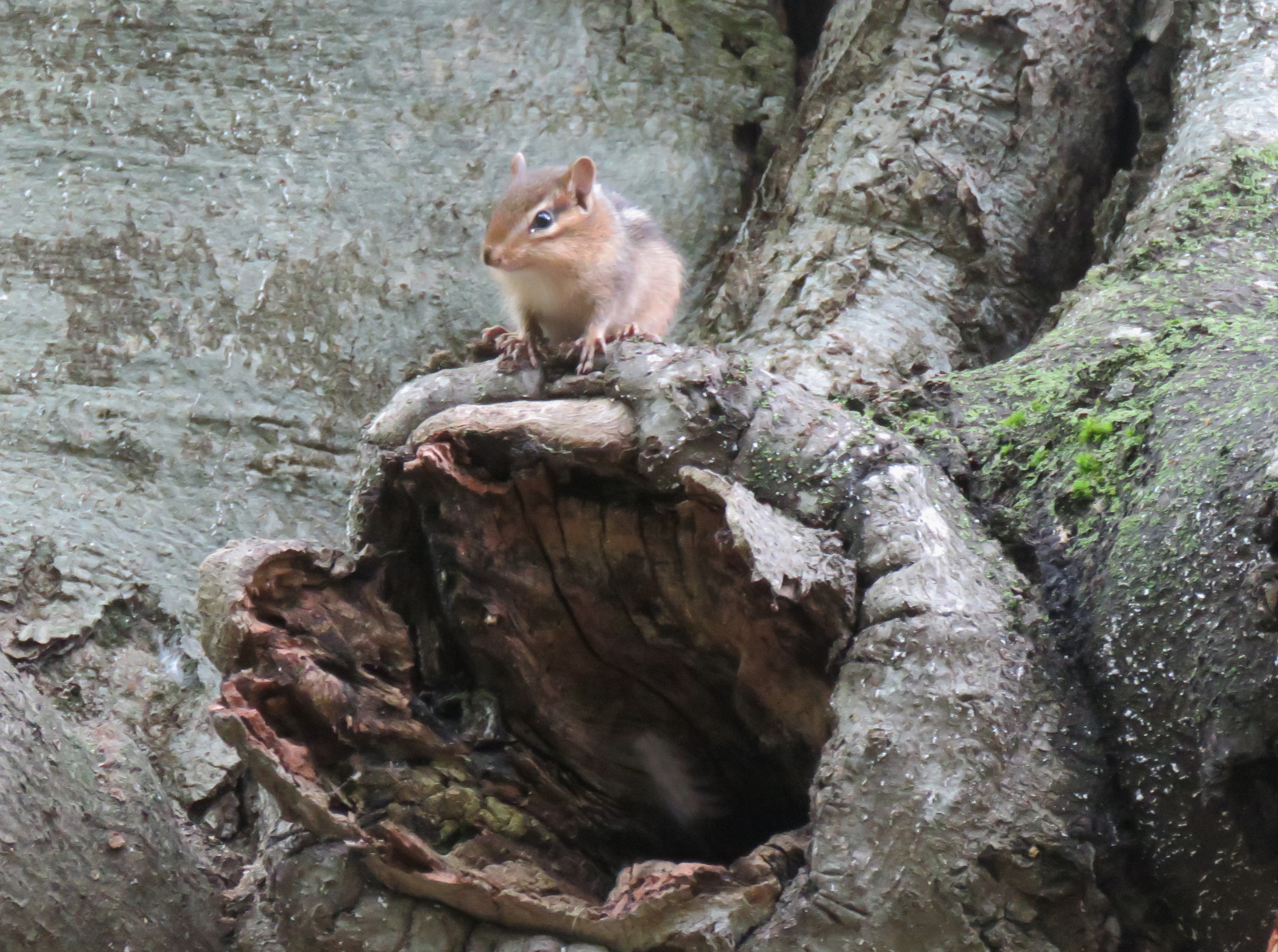 Spring is a perfect time to take nature-hungry children out in search of chipmunks, before growing leaves hide their antics. Walk the trails of any park or wildland in Oakland County and in addition to hearing frogs, perhaps Sandhill Cranes will sing from the wetlands, the first spring woodland wildflowers will be noted, and a bit of patience will most likely bring chipmunk observations. They may be scurrying over a log, be perched on an old stump, or even be staring down from a tree branch to watch your passing. Startle a chipmunk and it scampers off full speed ahead, often producing a series of loud “chips” that warn of danger.

At the approach of summer, living becomes easy – except for the risk of predation – for chipmunks. And that’s when some chipmunks enter into fresh food competition with birds and two-legged creatures, including me. Late June is the season when the berries of the serviceberry tree ripen in southeast Michigan. They are as sweet as apples and as juicy as blueberries. Tiny paws and bulging cheek pouches in the trees tell me that chipmunks agree with my taste buds, and desire to forage for nature’s fruitful bounty on the Wilder Side of Oakland County.

2 thoughts on “Chipmunk Secrets at the Dawn of Spring”