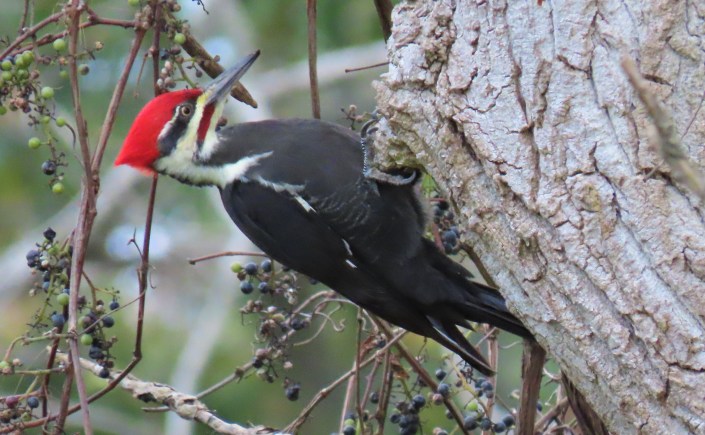 Pileated woodpeckers are North America’s largest species of woodpecker. These beautiful forest birds have a wingspan of up to 30 inches and measure from 16 to 19 inches in length, with a size and shape that’s most noticeable when they cling to the trunk of a tree.

Their eye-catching triangular red crest that sweeps off the back of their heads is a perfect identification clue, even for a novice birder. As for the name “pileated,” it refers to the species’ red crest, and is derived from the Latin word pileatus which means “capped.”

Despite their large size and red crest, they can be surprisingly hard to spot due to their wariness and ability to rapidly move about on tree trunks – often to the “wrong” side; away from wishful human observers. When it comes to hearing them, that’s another story. Loud drumming on tree trunks and their high-pitched piercing “wuk-wuk-wuk-wuk” calls wafting out of a woodland are unmistakable for those in the know.

The decimation of ash trees by the emerald ash borer two decades ago created favorable habitat for all woodpeckers, and, as a result, increased the pileated population across the Midwest. Even if you do not see or hear them, their large, rectangular-shaped holes in trees are clear evidence of their active, yet sometimes secretive, presence. Ants crawling around the base of the disturbed tree may also be visible.

Oakland County has excellent year-round habitat for pileated woodpeckers. They require mature dead or dying trees that harbor their primary food sources, especially carpenter ants. Those trees are essential for foraging and nesting success and are abundant in most of our state recreation areas, larger parks and nature conservancy lands, and along rural roads.

I often encounter pileated woodpeckers near my house in northern Oakland County and at nearby Independence Oaks County Park and Ortonville State Recreation Area. Just last week during heavy rain, I filmed a female pileated woodpecker about 20 feet from my door, industriously carving a new rectangle with her long chisel-like bill to access grubs hidden under bark. Her retractable tongue with tiny barbs and sticky saliva made it easy to snare bugs, ants, and grubs. I think her mission was successful.

The males and females look almost identical. Bird books emphasize that male pileated woodpeckers are slightly larger than females. Although birds do not pose side by side for viewers, photos or an artist’s sketch, telling a male from a female is rather easy if you look for their “mustache,” scientifically known as a malar stripe. Malar stripes are patches below the eye that appear on some species of birds and are believed to reduce sunlight glare, making hunting for food easier.

Both the males and females have flamboyant red crests, but the males also have a bright red malar stripe, while females have a black stripe. Females also have a very small yellowish-brown patch on their foreheads in front of the red crest on the head. That patch often goes unnoticed, but can sometimes be seen in a clear photo. These side-by-side photos, both captured within a few hundred yards of my house, show the gender indication malar stripe differences.

Although they are rightfully considered one of the most striking forest birds of North America, they are increasingly appearing in suburban and even urban yards and, on occasion, make brief foraging visits to suet feeders in winter, when they are not searching for hibernating ants and old larvae. This avian emblem of nature’s wildness is highly adaptable to opportunities that present themselves, which bodes well for the success of the species in our county.

For the past few weeks, I’ve been pleasantly interrupted by pileated woodpecker vocalizations that are audible even while I’m working inside at my home office. Their chatter tells me it’s time to leave the keyboard, grab my camera and take a hurried walk to a dead tree adjacent to my hilltop driveway — the location where I captured most of my photos. I then stand still, lean against the garage to steady my camera and document their actions, perhaps at times more appropriately called antics.

What really caught my attention was a pair of male pileated woodpeckers circling around the tree and engaging in what seemed to be a slow speed, almost cartoon-like chase and occasional jabbing at each other with their bills.

They circled the trunk of the tree for almost 15 minutes, pausing only to eat wild grapes dangling from the vine. Much to my surprise, they totally ignored my filming from just yards away. Even with all their antics, they never came close to losing their footing, because, like most woodpecker species, their toes are arranged in a zygodactyl pattern. Zygodactyl means two toes face forward and two point backwards, giving them a superb means to cling to tree bark.

Over-ripe berries have a lot of sugar in them, and it doesn’t take much for that sugar to start fermenting. I wondered if their copious consumption of the over-ripe, shriveled grapes explained their seemingly unusual behavior; a thought shared by some of my more knowledgeable birder associates who viewed this video. I also watched a female pileated swinging back and forth on a dangling grape vine attached to the same tree, pausing now and then to swallow a berry, and then another and another and then back to swinging some more, adding more documentation to the fermentation theory.

Pileated woodpeckers provide more than viewing pleasure for nature lovers. Thanks to the carpentry skills of pileated woodpeckers, a true forest “keystone species,” a species on which other species depend, their abandoned carvings seem to advertise “home for sale,” making them a vital part of both forest habitat and suburban lands. Even a small pileated excavation might offer shelter to a small bird on blustery winter nights.

Abandoned nesting cavities and large holes created in search of insects is not all that makes pileated woodpeckers a keystone forest species. Their excavations speed the decomposition of trees and accelerate the process of nutrient recycling, a critical need in a healthy forest habitat, allowing salamanders and wood frogs to hibernate under moist decaying wood.

In Oakland County, the list of species that benefit from those carvings include northern flying squirrels, wood ducks, screech owls, red squirrels and strangely enough, gray treefrogs. I once witnessed a gray treefrog perched on the edge of a low-to-the-ground pileated woodpecker cavity in a swampy area of Ortonville State Recreation Area. In the northern parts of our state, their cavities are attractive to fishers and pine martens; highly arboreal members of the weasel family.

The next time you meander in a woodland or hike an easily accessible park trail, stay alert for a mostly black bird with bold white underwings flying overhead. If you spot that flaming red crest, it’s pileated woodpecker confirmation time. Take a deep breath, stop walking, stand still, and watch — perhaps it will land near you. You may even hear its resonating music; one of my favorite natural sounds of November. Consider moments like those your wildness on a whim in Oakland County.

One thought on “Pileated Woodpeckers on a Whim”