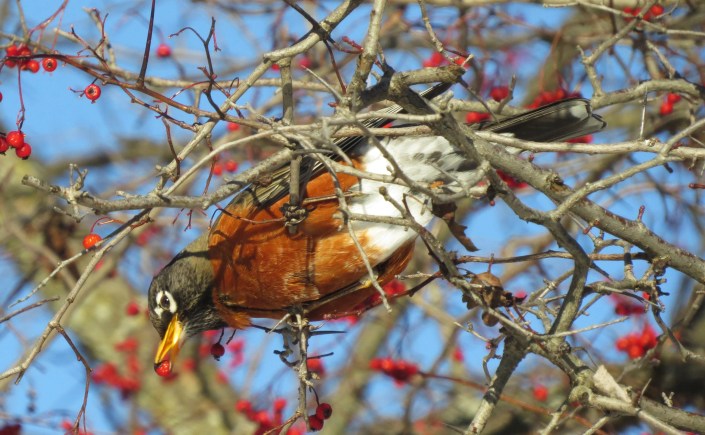 Is the American Robin a harbinger of spring? Many people believe so, but the fact of the matter is, some robins never left southeast Michigan and sightings were common all winter. Oakland County is a 365-days-of-the-year home for these much loved, lawn-hopping, worm-slurping birds with rusty-red breasts and cheerful, rather intricate songs.

Our resident robins simply opted out of hazardous, long-distance migration journeys and hunkered down and adapted to what nature offered. “Staying in town” also gave robins a head start on selecting prime nesting areas before migrant robins returned. So why did some of us see robins all winter and some saw not even one? Location, location, location is the partial answer, with a bit of observation skills tossed in.

The robins in the northern United States and across southern Canada that stayed in town remained close to their summer breeding habitat and simply changed their diets. That survive and thrive behavior generally meant moving away from lawns and open meadows and searching for trees or shrubs that hold fruit all winter. I look at those robins as short-distant nomadic wanderers. Their behavior is actually not very different from one of us discovering our favorite restaurant closed. Instead of heading on a journey of over a thousand miles to dine, we simply head to a local second choice restaurant with another likable food. Bottom line: If robins can’t find worms because the ground is frozen, they’ll fly a few hundred yards, or perhaps a few miles, to a location rich in winter-hardy berries.

If you kept an eye on a totally snow-covered suburban lawn, the chances of seeing a robin hunting for worms was just slightly better than capturing Sasquatch on a trail camera. However, if your winter adventures took you into our Huron-Clinton Metroparks, Oakland County Parks, and Michigan State Recreation Areas, or along the Paint Creek, Polly Ann, Michigan Air Line, or West Bloomfield trails, you may have noticed robins along the berry-rich woodland edges.

An ice fisher on Orion Oaks County Park’s Lake Sixteen told me he often saw robins hopping about under shrubs as he shivered and stared into an icy hole in single digit weather. He stated he thought the robins were warmer than he was. They were! His body temperature was most likely 98°F, but the robins maintained a cozy internal temperature of 104°F.

Here’s how robins stay warm: their waterproof outer feathers are much like an insulated winter slicker. Those feathers remain cold and that means snow slides off without melting. Dense layers of loose downy feathers are found between the outer feathers and the robin’s skin. Down is an excellent insulator and the puffed up downy under-feathers of a robin trap air and maintain the robin’s internal temperature. Even when a robin stands motionless on ice or hops about a snowy field, their feet do not get cold. Conversely, my bird-watching ice fisher friend would have to get up and stomp around to keep his feet warm, temporarily abandoning his quest for perch.

Robins also have extremely rapid circulation with a heartbeat of approximately 500 beats per minute. Thanks to that fast pumping action, and the design of their blood vessels, blood is warmed flowing back from the heart.

Although I never saw a robin near my birdfeeder, hardly a winter day went by in my part of northern Oakland County without noting small flocks of robins feasting amidst my staghorn sumac at the woodland’s edge, even when snow swirled about and deer stayed bedded down in the cedar swamp. When the sun broke though, they would scatter a bit, fluff up their feathers, perch on low branches, and perhaps dream of the worms of spring. On some mornings, a flock of several dozen would perch high up in a tree to catch the rays of the sun. Other robins would land on my garage and sip from dripping icicles.

Robin encounters were frequent during my wintry meanderings along the shoreline of Crooked Lake at Independence Oaks County Park and along a meandering creek near my house. They hunkered down near boardwalks, sheltered amidst lakeshore shrubs, and sometimes, all but posed in clear view.

When snow melt accelerated in the first week of March, robin flocks moved up from the shelter of the shrubs and woods and often appeared on small patches of exposed grass just yards from my house. I suspect the robins’ thought process went something like this, “Grass! Grass means worms! Let’s slurp worms!” It must have been an exercise of extreme frustration, for they hopped about, searching, looking, and listening in vain for any hints of earthworms in the solidly frozen earth before they returned back to the shrubs and another berry hunt.

Robins are omnivorous creatures with the ability to devour a great mix of nutritious foods, in addition to earthworms. The list includes bugs, beetles, grasshoppers, grubs, crickets, snails, and the berries of chokecherries, hawthorn, dogwood, staghorn sumac, and juniper. The robins that over-wintered near me seemed to favor staghorn sumac and the berries of oriental bittersweet. Both plants held their fruits all winter, providing all-you-can-eat buffets.

Here’s the rest of the natural history story of robins in winter and their ongoing transition to spring behavior, with a bit of assistance from the Cornell Lab of Ornithology:

“Although robins are considered harbingers of spring, many American Robins spend the whole winter in their breeding range. But because they spend more time roosting in trees and less time in your yard, you’re much less likely to see them. The number of robins present in the northern parts of the range varies each year with the local conditions. Robins eat a lot of fruit in fall and winter. When they eat honeysuckle berries exclusively, they sometimes become intoxicated. You’ll find them on lawns, fields, and city parks, as well as in more wild places like woodlands, forests, mountains up to near treeline, recently burned forests, and tundra. During winter many robins move to moist woods where berry-producing trees and shrubs are common.”

In a few weeks, when lawn soils thaw, worms will become an entrée of choice. That fact brings to mind a widely-shared statement on the internet that claims a robin can consume “up to 14 feet of earthworms” in a day! Even with my poor math skills, I was skeptical of that amount. That’s a heck of a lot of wiggling worms to slurp down by a bird that weighs less than three ounces! I did some intensive sleuthing and believe I found the truth: During their two-week nest life, a baby robin will eat the equivalent of 14 feet of earthworms. That sounds more plausible to me. My math makes that three or four worms per day.

The middle days of March are here. Red-winged Blackbirds are singing in the marshes, maple sap is flowing, and early woodland wildflowers are emerging from under their leafy winter blankets. These are all signs that spring is winning the seasonal duel with winter. The ground is still too frozen to capture the iconic image of a robin tugging on a struggling earthworm. When that occurs, one day very soon, we will know spring is here to stay. But for now, take pleasure in watching robins as they hop about, pause, look, listen, and wait for their first worm feast at the dawn of spring.