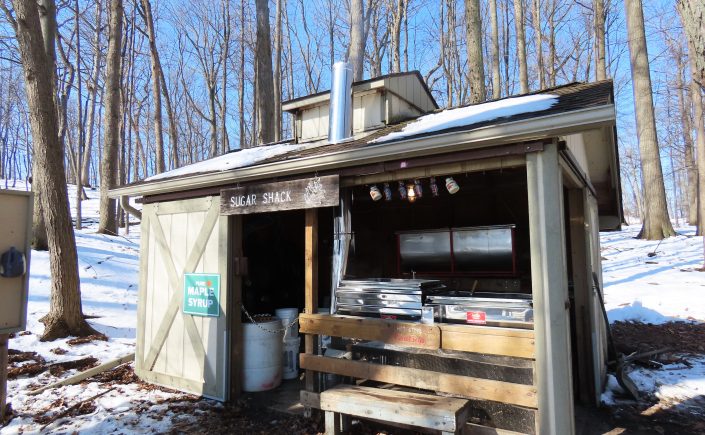 “A sap-run is the sweet good-by of winter. It is the fruit of the equal marriage of the sun and frost.” John Burroughs, Signs and Seasons (1886)

Eastern bluebirds had been flitting about my meadow for the past few weeks. Skunk cabbage emerged from frozen mud down at the marsh. Great Blue Herons and Sandhill Cranes stalked the edge of our county’s wetlands as the duel between the seasons accelerated. Those signs all teased of the approach of spring and then the county was bathed in blue sky with temperatures flirting with the 50 degree mark last weekend.

Mid-week, winter returned, but the sweetness of spring’s approach remains on tap.

Patrick Bigelow is the Supervising Interpreter at the Kensington Metropark Farm Center and he knows the ways of the wilds, and the timing of the maple sugaring season well. He explained “Temperatures are in fluctuation now and freezing nighttime temperatures followed by day time thaws are helping to get tree sap flowing. It’s their calisthenics before the big show!” The bottom line is as clear as the glistening drops of sap that fell into a tin bucket: the first sweet taste of spring has arrived and the “big show” is now on.

Many parks and nature centers within Oakland County offer maple sugar programs from the end of February well into March, but this year I decided to be at the Kensington Metropark Farm Center for the official start of their multi-week “Maple’s Sweet Story” program that takes place at six of the thirteen Huron-Clinton managed parks across southeast Michigan. Indian Springs Metropark and Kensington Metropark, the two Metroparks that are in Oakland County, are included. Weather conditions were spectacular for the start with the temperature below freezing the night before and reaching the mid-forties before that first drip glistened in the sunlight.

Last Saturday morning, under the watchful eye of a low-flying red-tailed hawk, I watched Bigelow gently tap a spile into a freshly drilled hole on the sunny side of a sugar maple at Kensington Metropark Farm. Four seconds later – Yes, I timed it – the first drop of sap appeared and pinged into the bottom of the tin bucket. With that act of confirmation of spring’s official approach, the 2020 maple sugaring season was underway in Oakland County.

Bigelow reminded me that the spring-like weather also meant Kensington Farm would be busy with the farm’s newest baby animals drawing visitors. And then there were others like me, who wandered the Kensington nature trails and were gifted with encountering a small flock of wild turkeys with two Sandhill cranes in their midst. It really was a perfect day.

It’s hard to describe with just words what you see, smell, feel and taste at a sugaring operation, but here are the basics from my experience. Visitors that toured the maple sugaring operation at Kensington gained the basic knowledge of how sap is gathered and transformed into syrup, and could also shop in their small gift shop that sells maple products. Attendees quickly discovered how to identify leafless maples, and even young children soon could tell opposite budding trees from alternate budding trees. When they came across opposite budding trees, I heard them exclaim excitedly, “Maybe it’s a maple!” When they came across alternate budding trees, they knowingly declared, “It’s not a maple” because they had learned that maple trees do not have alternate buds.

Many of the adult visitors on the tour already knew it takes a 40:1 ratio of sap to syrup to get true maple syrup. Bigelow explained how sap is boiled and how to know when it has turned to syrup as visitors watched clouds of steam rise from the wood-fired evaporator pan at their sugar house.

“There are two methods to tell if your syrup is done, the first is by density and can be measured with a fun piece of equipment called a hydrometer. Newer tools called refractometers, that look very similar to blood sugar meters, are able to do this digitally. The other method is by boiling point. The boiling point of water is lower than that of sugar, so as you are in the last phase of boiling down your syrup, you can watch the temperatures rise in your pot. Once you hit 219˚F, you’re at the magic point for syrup.”

I smiled at Bigelow’s professional explanation and thought back to my days as a tree-hugging, nature-embracing student at Goddard College in the rolling hills of Plainfield, Vermont and the hours I spent hunkered down at a local sugar house and trudging on snowshoes in the adjacent sugar bush. Sugaring was and is still a way a life in much of our Green Mountain State. We did not pay much attention to any of the math or technicality of sugaring and we knew nothing about refractometers and barely watched a thermometer. Cell phones and portable computers weren’t even in existence back then so we couldn’t ask Google for help. We had to resort to the locals and something called “books” to gain knowledge. I purchased the 1970 second edition of The Maple Sugar Book by Helen and Scott Nearing and it became my Bible of sugaring knowledge. I still have and cherish that book, and the wisdom within.

We did, however, discover two things without the help of the book in the hills of Vermont

We would have it on pancakes the next morning, or on occasion we would carefully, or perhaps it was carelessly, create toffee-like candy made by frizzling some hot maple syrup that was “thickening” onto the fresh snow. My love affair with the “sugar bush” that started in the Vermont woods continues today.

I wandered with the visitors all morning and was amazed at the information that could be absorbed by listening to the naturalists and presenters, and by reading the sugar bush trail interpretive signs. Perhaps my greatest pleasure was watching Mike Jewell interact with wide-eyed children and adults. Jewell is an Anishinaabe gentleman that shared the Native American story of sugaring at Kensington’s Maple’s Sweet Story program. He’s worked on the maple program for many years, and is also a volunteer with Chief Pontiac Programs which is the organization that also runs the Kensington Living History Village at the Kensington Farm Center, a reminder that there is much to do when exploring 4,481-acre Kensington Metropark on the wilder side of Oakland County.

Bigelow and I corresponded again a few days after the program and he told me that he and Mike Jewell agreed that the opening day sugaring operation was the best start to a maple season they can remember. For a listing of all upcoming Huron-Clinton Metroparks Maple Sugar programs visit, their website. They offer sugaring programs well into March at Hudson Mills, Indian Springs, Kensington, Oakwoods, Stony Creek and Wolcott Mills Metroparks. The sap-run is on! Go catch it at any of the sugaring operations on the wilder side of our County.

This Old House created an excellent video on maple syrup production with tips for backyard sugaring. Watch it here: How to Make Maple Syrup | Ask This Old House.