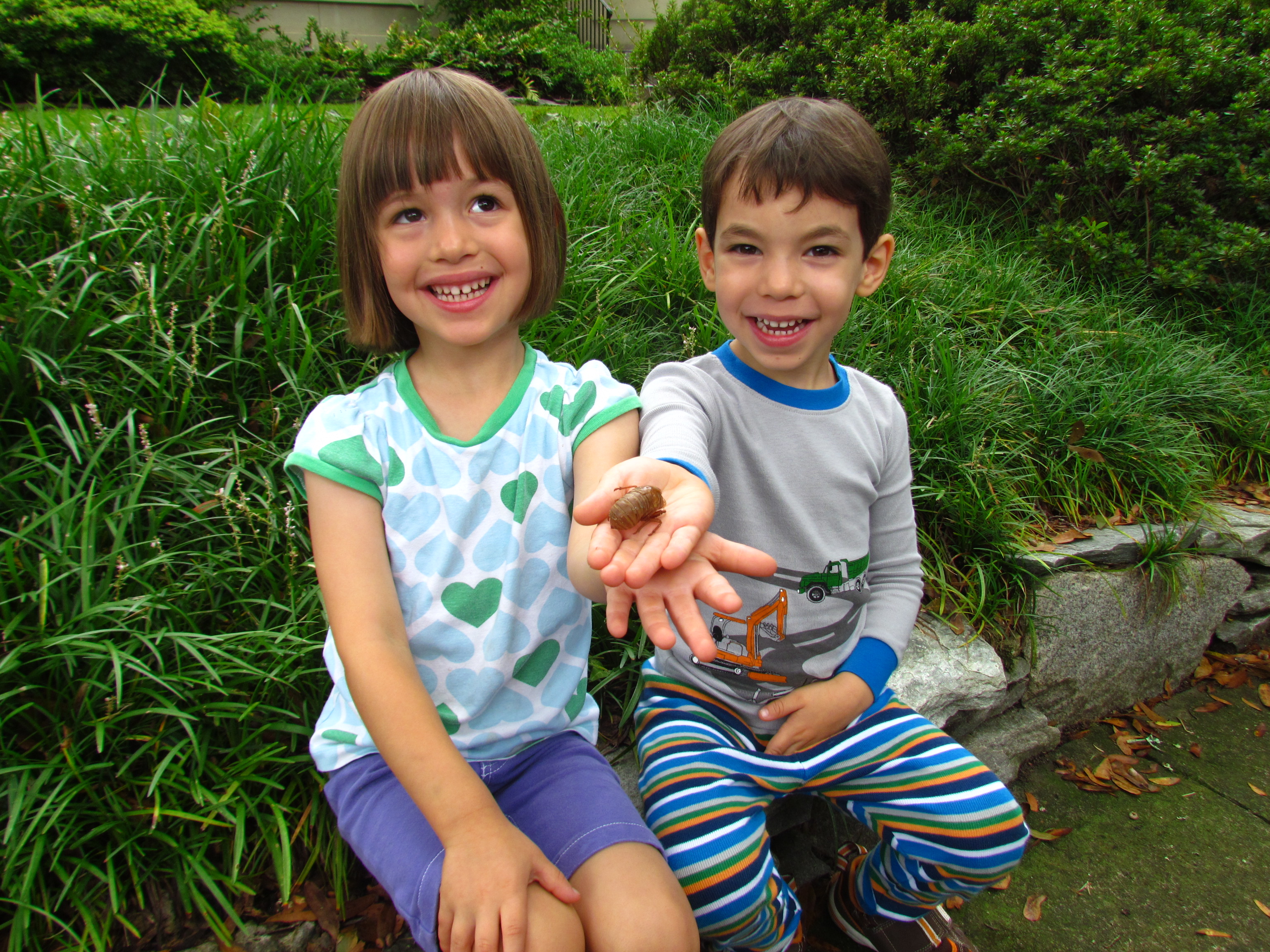 Cicadas! That’s what the buzz is all about. They are enriching the parklands and treed urban streets with shrill buzzing, perhaps best described akin to miniature chain saws that run fast and loud  for a few seconds — and then slowly grind to a stop. The dog-day Cicadas have emerged. They may be mostly out of sight, but they are certainly not out of mind. 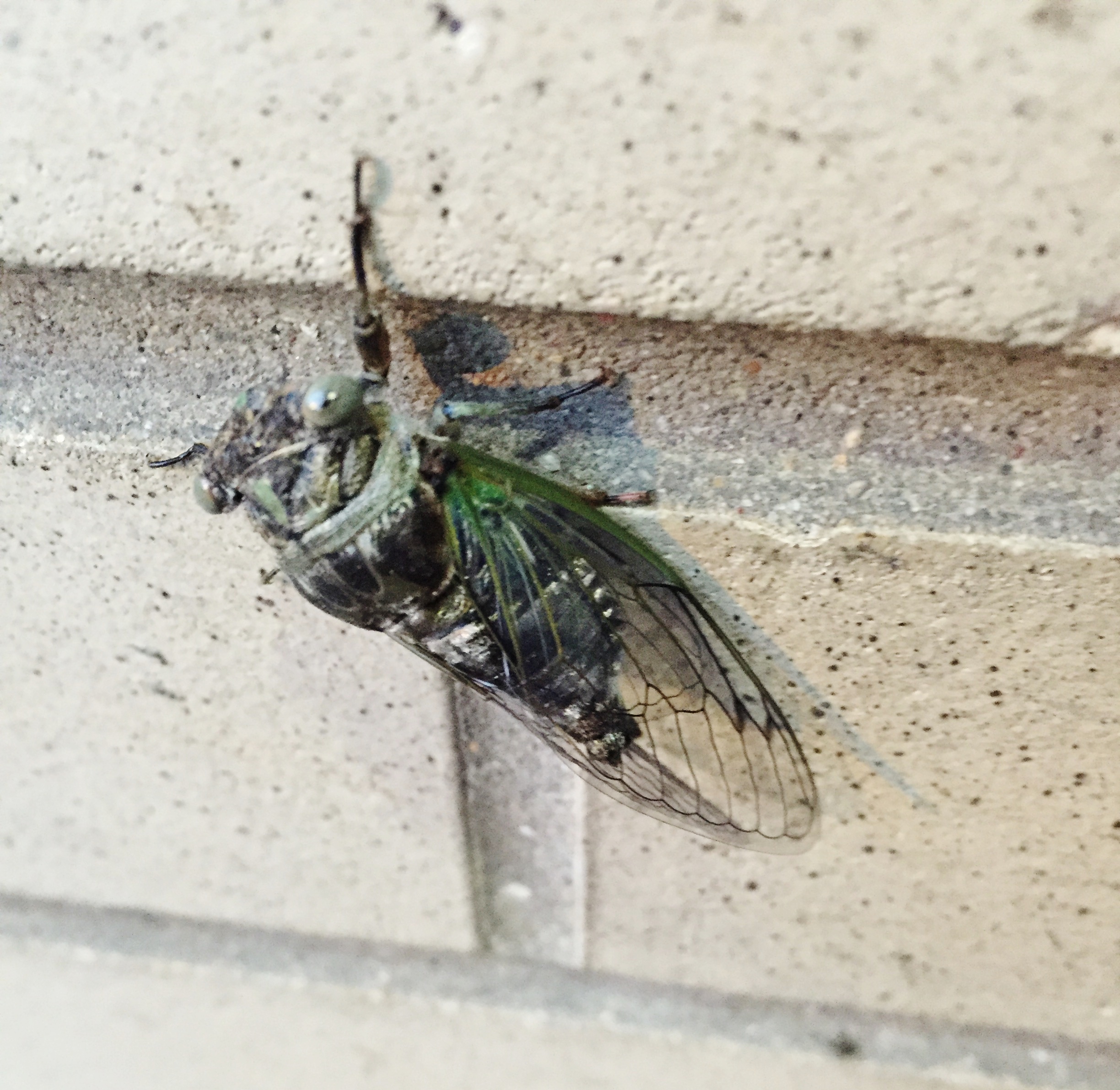 Tales of cicadas keep coming my way. An Oakland County coworker shared her story of guests “dive-bombed” at a wedding in Tennessee. “It was 95 plus degrees with intense humidity and all I could see out of the corner of my eyes were cicadas…whizzing past. One landed on the back of my dress. I’m thankful I didn’t see it because I would have ruined my friends vows,” she said. An Oakland County Sheriff’s Office deputy sent me a photo of a newly emerged cicada clinging to a brick wall. He wanted to confirm his identification. Yes Deputy, it’s a cicada.

This Wilder Side of Oakland County story comes with a scientific disclaimer since I am not an Entomologist. There are almost 200 species and subspecies of cicadas in North America I am not about to attempt to decipher the subtle differences in shape, sound and behavior. As for the accompanying photos, I captured the images of the green-hued emerging cicada clinging to an automobile tire last year in Columbia, South Carolina. The remainder of the images are from Oakland County. 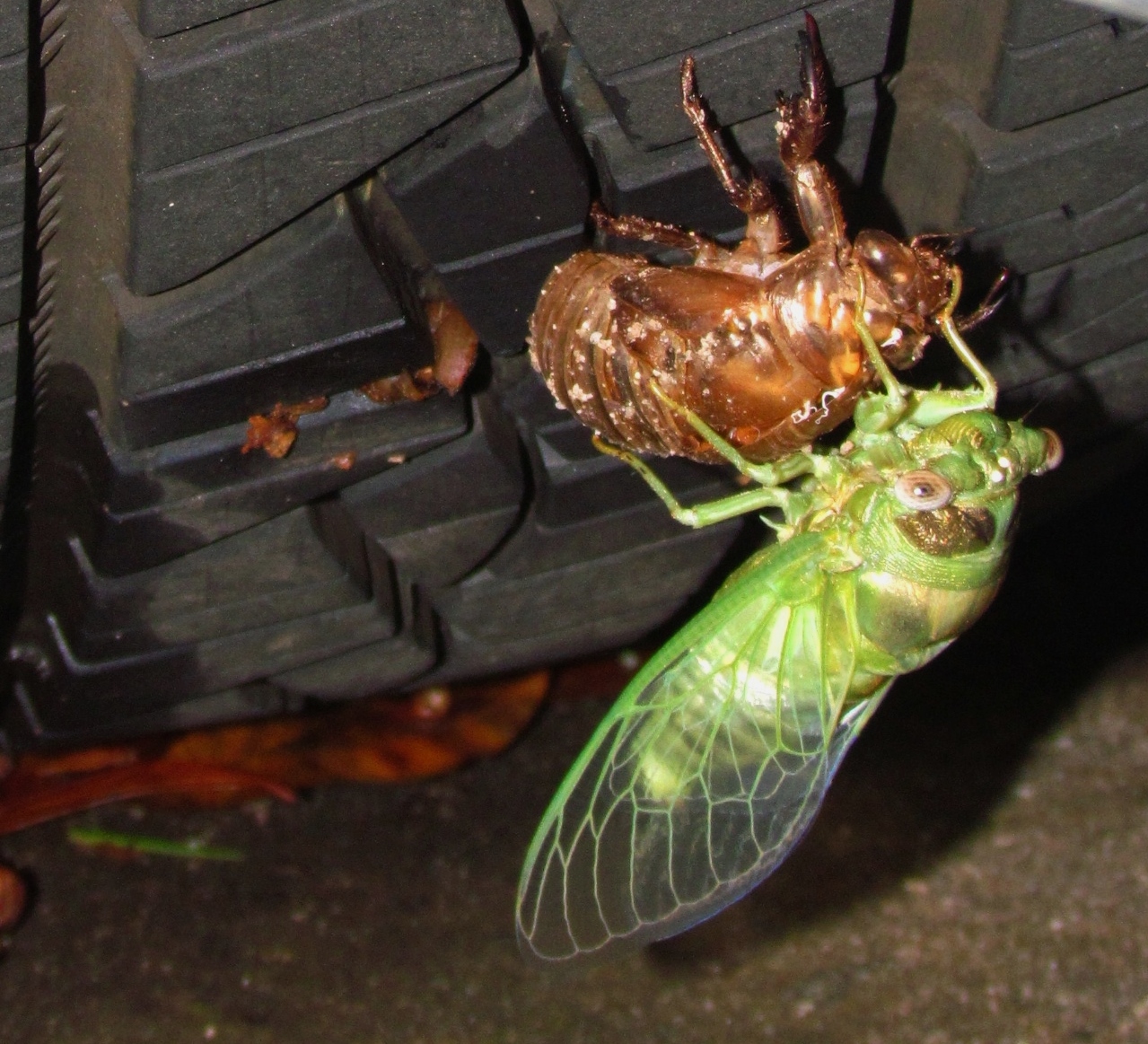 There are two groups of cicadas: dog-day cicadas also known as annual cicadas and periodical cicadas. Periodical cicadas are very long-lived creatures, although most of their life, like all cicadas, is spent underground sucking on root sap.  According to the University of Michigan’s Museum of Zoology,  “The genus Magicicada contains the periodical cicadas, known for their 17 or 13 year synchronized life cycles and dense choruses. These cicadas have striking black bodies, red eyes, and red wing veins.”  Equally exciting for little kids, and all nature lovers, are the dog-day cicadas with an annual life cycle that are active Oakland County now. 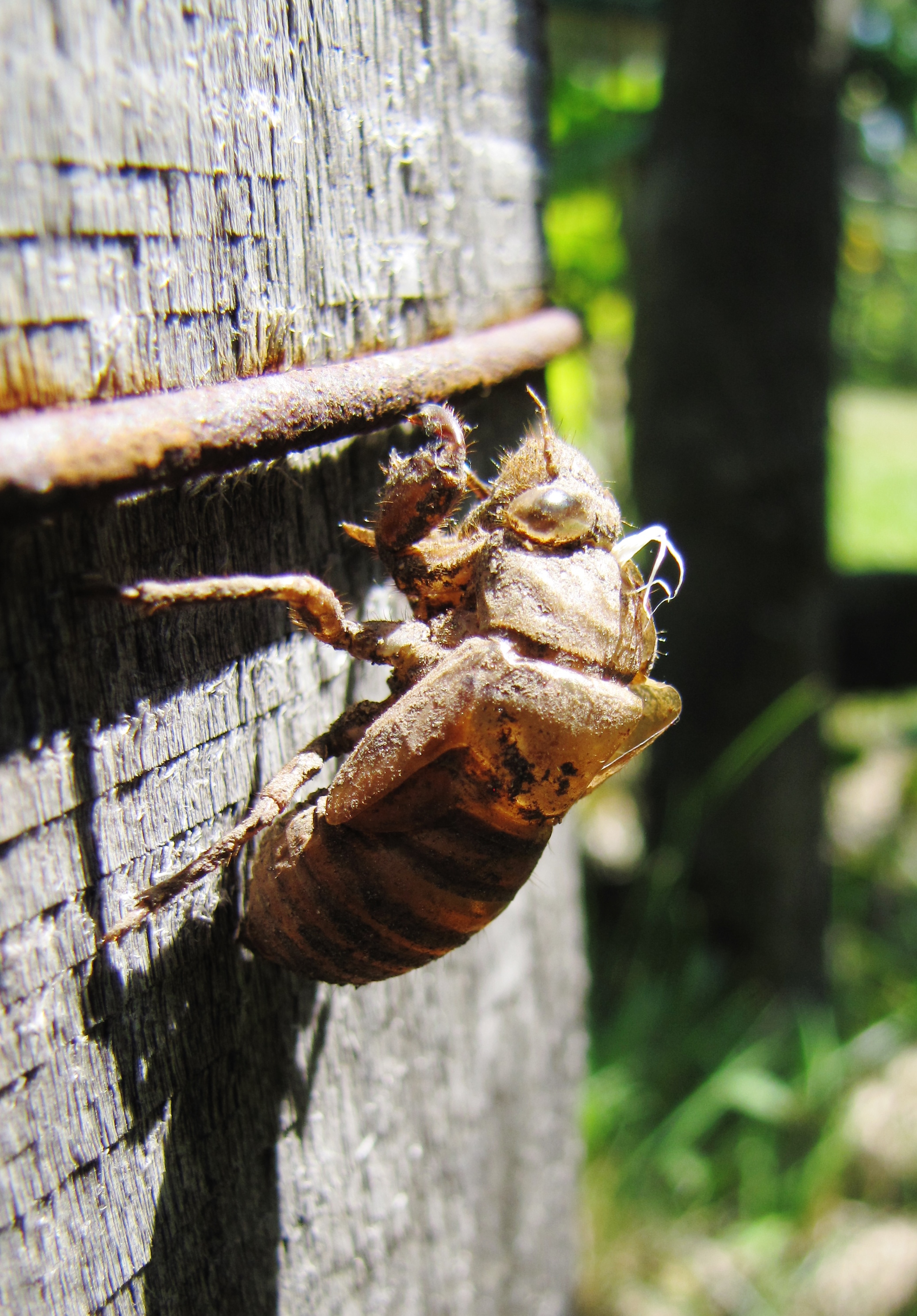 Cicadas begin their life as very tiny rice-shaped eggs, deposited on the twigs of tree branches by the adult winged cicada. Each cicada lays hundreds of eggs that hatch about six weeks later as ant-like nymphs. They quickly burrow underground searching for tree roots, where they remain sucking sap for most of their lives.

When their growing period comes to an end, the cicada larvae emerge at night and slowly climb the trunks of a nearby tree. Sometimes there is no tree to return to, so a car tire, brick wall or other vertical surface will suffice. 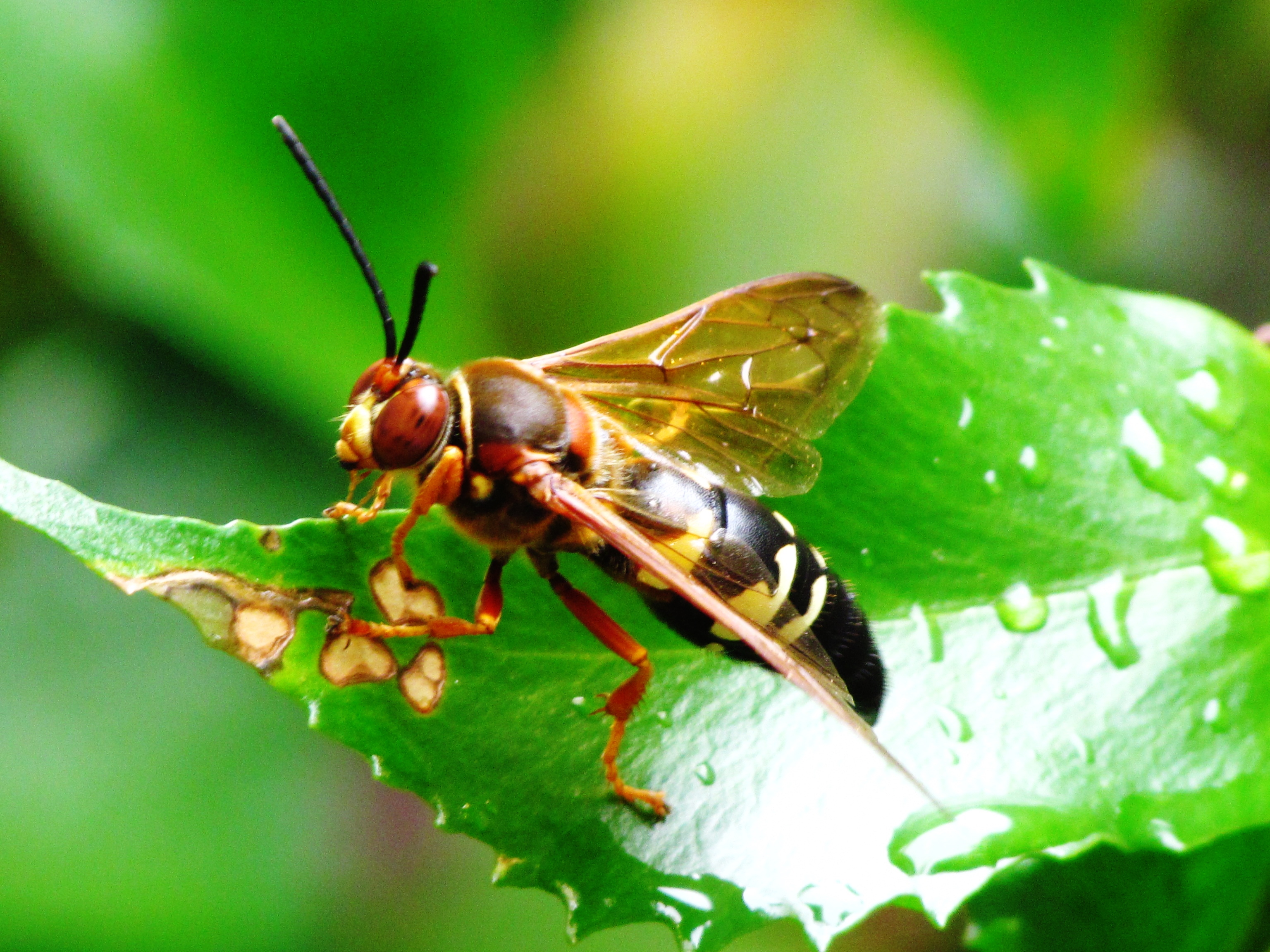 Some cicadas fall prey to predacious insects known as Cicada Killer Wasps, a creature that digs underground burrows and feeds their grub-like larva with cicadas paralyzed by their sting. Michigan State University Extension reminds nervous homeowners, “Despite their large size and fierce appearance, it is easy to get along with cicada killers.” 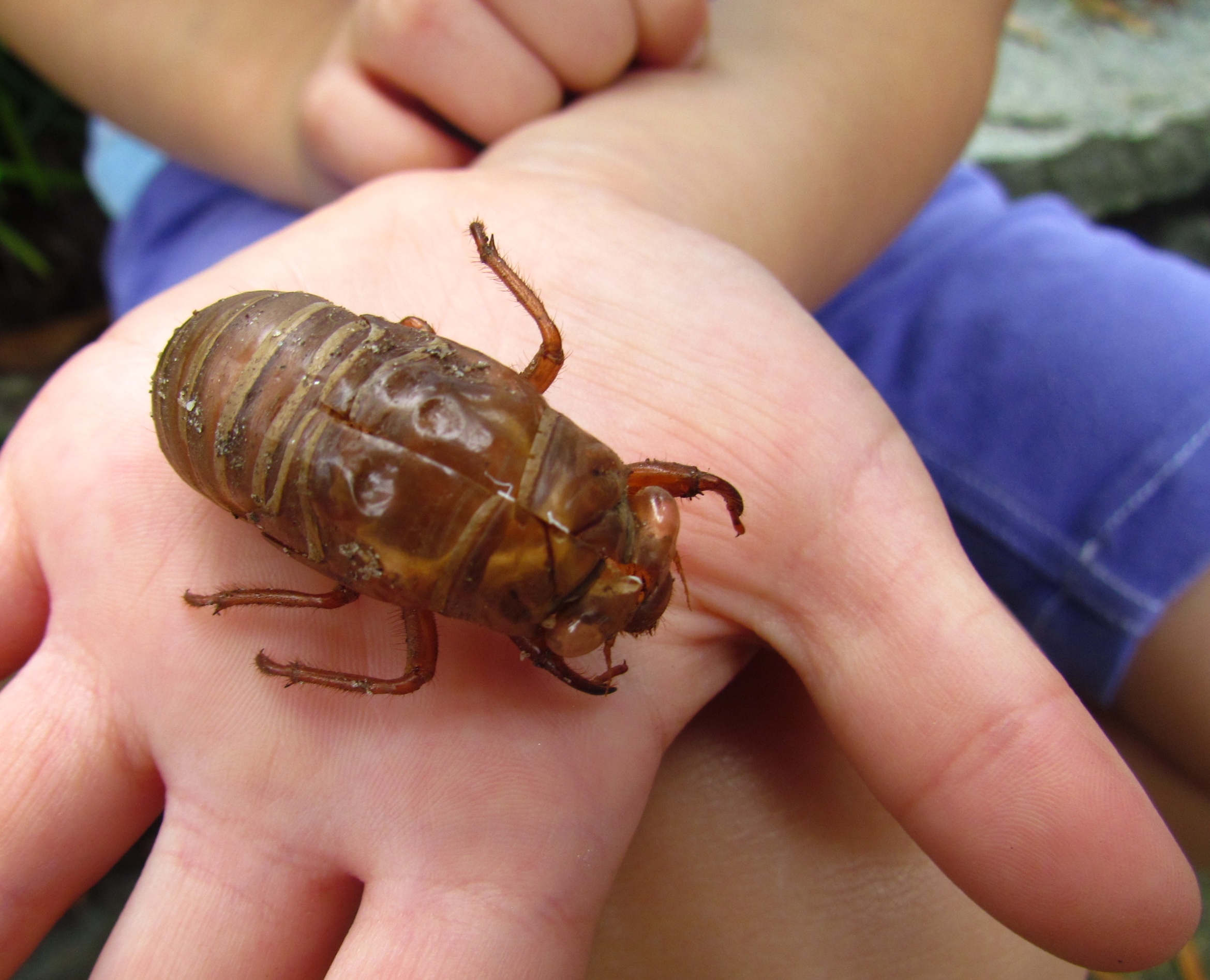 Early risers in Oakland County may witness the transformation of a cicada from an ant-like creature to a flying one. Start at eye-level and then look downwards at tree trunks as you hike the trails.  It takes just a few hours for the emergence from the exoskeleton and then it’s time to fly to the treetops. According to the University of Michigan, “The males produce a loud, species-specific, mate-attracting song using a specialized organ called tymbals.” The females are lured by the shrill treetop love ballads, and the cycle of life and love in the treetops during the sultry dog days of summer is repeated.

One thought on “Dog Day Cicadas!”