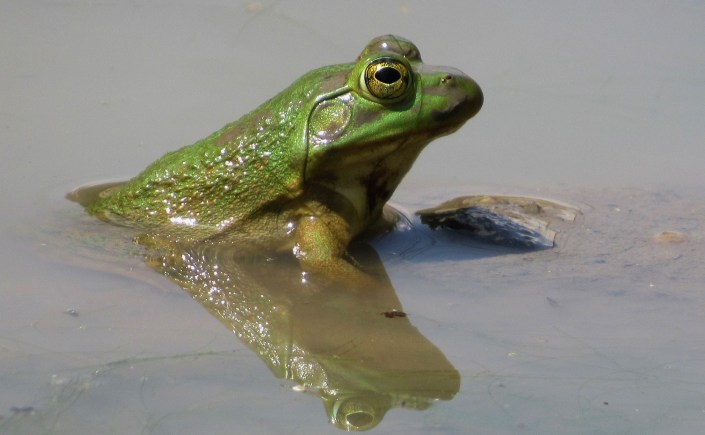 “Nothing exists for itself alone, but only in relation to other forms of life.” – Charles Darwin

Darwin’s timeless quote might just be the perfect mantra for the American Bullfrog (Lithobates catesbeianus), the largest frog in North America. This giant of a frog is heard far more often than seen. It is a major player in Oakland County ponds and wetlands and an integral part of its watery environment.

Bullfrogs can weigh well over a pound and be almost eight inches long. Their appetite is even larger than their size. Unlike other frogs that just wait patiently at the edge of a swamp to snag a passing bug or dragonfly with a lightning-fast sticky tongue, bullfrogs lunge open-mouthed at unsuspecting passing prey.

I encountered the biggest bullfrog I ever saw over a decade ago along a new section of the West Bloomfield Trail that was still under construction. It was trapped in a precarious location on the trail’s edge and blocked from reaching a wetland by silt screening at the construction site. After a few quick photos, I carried the frog across the barrier and set it free at the wetland’s edge where one giant leap sent it almost flying into the safety of the water. At the time, I surmised it was also probably ready for a fresh meal after a cool-down swim.

Bullfrogs are superb ambush predators with ravenous appetites and will consume almost anything that they can overpower and fit inside their gaping mouths. Their opportunist diet is diverse and includes other frogs, salamanders, crayfish, earthworms, newly-hatched ducklings and goslings, snails, snakes, fish, mice, meadow voles, and small turtles. They have even been documented lunging at and capturing bats that swooped low over ponds as they hunted bugs and mosquitoes at twilight.

Adult bullfrogs gather at their breeding wetlands and ponds in late spring and early summer, much later than most other frog species. They quickly stake out territories with good egg-laying sites, calling loudly to attract mates, a process that is now well underway. The vocalization also serves to repel possible rival males with a message that serves the same purpose as a “No Trespassing” sign – stay out of my territory! Bullfrogs will aggressively defend their territories from other bullfrogs and not just by their “song.” They will physically “wrestle” intruder frogs that hop over the invisible line.

There are many reasons I am passionate about this masterful predator, but it’s the deep baritone call of the male bullfrogs in the dawn’s early light and on June evenings that now lures me towards weedy ponds and swamps. Their deep vocalizations are unmistakable and carry for a very long distance on windless evenings. Bullfrogs are vocal both day and night, but other sounds of nature’s way and human activity often muffle their calls during the day. However, they seem to be most vocal on warm moist nights, as the sultry days of summer draw near.

The baritone bellow that some say sounds like a cow’s deep mooing, led to the name bullfrog. Only males create that trademark bull-like bellow. I prefer the description as a deep throaty vocalization of the words “jug-o-rum.” Listen to a bullfrog’s vocalization here:

I often meander down to a pond that’s about a ten-minute walk from my house and have noted that most of the bullfrog bellowing seems to come from a few very shallow, weedy sections – prime habitat for a receptive female bullfrog to lay her eggs and for tadpoles to have their best chance of survival. However, I can almost guarantee that any unpolluted wetland or pond in Oakland County that has lush aquatic vegetation, such as lily pads, duckweed, and cattails, has frogs living in it, and that will usually include bullfrogs. That prime habitat, however, is also a high-risk area for bullfrogs since Great Blue Herons, Great Egrets, Belted Kingfishers, and snapping turtles, along with raccoons and northern water snakes, all hunt for frogs – and a bullfrog makes a good meal.

There are times I have been at wetlands in our Oakland County parks, Huron-Clinton Metroparks, and State Recreation Areas and clearly hear the bellowing of bullfrogs, but no matter how much I look, I cannot see them. Natural camouflage of multiple shades of brown and green and staying absolutely motionless are advantages bullfrogs have over both their predators and their prey. A hunt for creatures to ambush sometimes ends poorly for a bullfrog that was motionless. For just as it lunges forward to grab its intended prey, a Great Egret or Great Blue Heron that was also motionless suddenly stabs forward with its beak and captures the frog.

Bullfrogs are often confused with the smaller green frogs, but that is not surprising, since large green frogs can be much bigger than small bullfrogs. The easiest way to tell them apart is the raised ridged lines that run down their backs and are sometimes called dorsal lateral or glandular folds. On a bullfrog, the ridged line fold starts at the eye and wraps around the tympanum (eardrum), while on a green frog it stays straight and goes all the way down the back. Their vocalizations are entirely different with the green frog call sounding a bit like a plucked banjo string. This YouTube video from Life Underfoot in Indiana shares both the audible and physical differences between the two species.

Telling male and female bullfrogs apart remains a challenge for me unless they are very close up or I see them bellowing, in which case it’s a male. They exhibit slight physical differences which to the untrained eye, and count me among the untrained, can easily be missed. The tympanum (the eardrum which is visible as a small disc behind the eye) of the male bullfrog is larger than that of the female. The tympanum on the male is larger than the eye, whereas the female tympanum and eye size are the same. Those differences, however, are extremely hard to spot from a distance, and even close up, it remains a challenge for me. If lighting conditions and your observation location make the throat visible, there is another clue: throat color. Males have yellow throats, which often are rather bright, while females have paler cream-colored or white throats.

As summer draws near, I increase my paddling time to explore the wetland wonders of nature’s way. Once in a while I get lucky and spot a bullfrog in the shallows of one of my favorite paddling areas, Graham Lakes at Bald Mountain Recreation Area. But as I write these words, humidity is rising, storm clouds are forming, the sun is sinking and the deep baritone choruses of bullfrogs defining their territory can clearly be heard from my open window on the wilder side of Oakland County. That means I must do what any nature writer would do: Stop writing and get walking. It’s time to follow the words of Henry David Thoreau, “I enter the swamp as a sacred place.” Walking, The Atlantic Monthly (Thoreau, 1862) At the swamp’s edge, I will once again listen to the good night chorus of bullfrogs and call it a day.