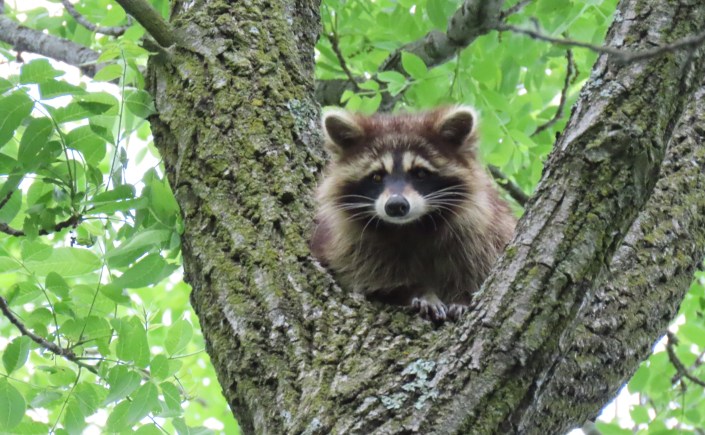 October brings falling leaves, ripening pumpkins, and roving raccoons. Raccoons are among the most widespread mammals of Michigan, and have adapted extremely well to life in Oakland County. These clever creatures can be found everywhere, from our farmlands and wildlands, to the city streets and suburbs of Rochester, Southfield, and Pontiac. Although raccoons are chiefly nocturnal, it’s not at all unusual to see one at dusk or in the dawn’s early light, as they prepare for winter’s approach by putting on pounds and searching for denning sites.

Wildlife biologists have documented raccoon population density as usually higher in residential and urban areas, than in rural or forested areas. That should not be surprising since we humans support the lifestyle of raccoons by unintentionally supplying food and shelter. Literature states that raccoons feed primarily on crayfish, frogs, fallen fruits, acorns, eggs, turtles, and even small mammals, including baby rabbits and muskrats. However, these opportunistic omnivores are masters at scavenging and readily eat almost anything they can find.

Why scrounge about for a lone crayfish under a rock, or chase after a leaping leopard frog, when there are plenty of autumn picnic leftovers, trash day buffets, easy-to-access dumpsters, accessible pet dishes, overflowing bird seeders, and ornamental fish ponds to satisfy autumn appetites. Raccoons in the city of Bloomfield Hills have even learned to roll back freshly applied sod to feast on worms and grubs hidden underneath.

Don’t let anyone tell you that raccoons are not intelligent creatures. For when it comes to finding a place to raise a family or den down for the winter, they are pros at finding prime real estate and are also super climbers. In 2018, a raccoon made national news when it scaled the exterior wall of a 25-story building in Minnesota.

Raccoons were once creatures of the forest with nature providing them with tens of thousands of oak trees in Oakland County. Some of those trees have enticing hollows, naturally formed cavities within the tree, which to raccoons, are vacant luxury apartments. As I hike woodlands on colorful October days, I take pleasure in knowing trees with hollows and snags might offer shelter or a resting place to a raccoon, or perhaps an owl.

Earlier this year, I was lucky to come across a raccoon snoozing high up on a branch in mid-morning at Highland Oaks County Park. The alarm call of birds bothered by the raccoon’s presence drew my attention to his lofty branch with a view of the lake. I managed to capture a few quick photos before it retreated back into its hollow, leaving just a furry tail exposed.

Raccoons are masters at adaptation. If a satisfactory tree is not available, an uncapped chimney, or an attic with a broken vent cap, is perfect for both spring baby raising and snuggling down for winter. When a raccoon finds an abandoned owl nesting box, such as this one did behind my house, “the living is easy.” This raccoon spent most of the day sleeping inside the nesting box, but on chilly mornings, it would sometimes “hang out” at the entrance, basking in the sun’s warmth.

Nighttime means dinner time for raccoons. With that fact in mind, I strategically placed a pile of fish entrails at the edge of my woods near a motion activated camera in hopes of capturing a raccoon’s gluttonous behavior. Mission accomplished! The next morning, I reviewed several short video clips. One showed a raccoon feasting on the fish gut smorgasbord with the gusto of a hungry teenager.

There is a common myth that raccoons must wash their food before they eat it. That’s simply not true. They eat what they find, where they find it. However, raccoons have very sensitive paws, making their acute sense of touch one of their most important tools for finding food, especially when it’s in the water and out of sight. Raccoons witnessed at the edge of ponds, seemingly washing their food, are in reality, feeling about in shallow water for crayfish, frogs, and mussels. Another myth is that if you see a raccoon in the daylight, it must be rabid. That too is untrue. Raccoons don’t always behave the way we expect them to, and it is not at all unusual for a raccoon to wander near a garden pool for a sip, sample a succulent snack, or even perhaps, explore a pumpkin patch. Needless to say, if they wish to bask in sunlight on a tree branch, that cannot be done at night.

Hours of daylight are getting shorter. As November approaches, raccoons increase their foraging and sightings sometimes increase, but by December, they are seldom seen. Raccoons do not hibernate, but practice what is called winter denning, a time to save energy and be a little less active. During periods of extreme cold, they hunker down in their shelter, and when it’s warmer, they venture out. If you’re lucky, you might spot a raccoon searching for food on sunny winter days when the temperatures are above freezing, or find their easily identifiable tracks in the snow, confirming that the masked bandits of our county were carousing about the night before.

In late February or early March, male raccoons wander in search of females. About 60 to 65 days later, four to five kits, sometimes called cubs, are born weighing about four ounces each, all easily fitting into the palm of a hand. Kits are usually born within a tree, but those born in attics will usually seek out an attic of their own when they reach adulthood and are ready to breed.

I’ve captured images of adult raccoons in trees and fields, but nothing in the way of babies or young raccoons, so I contacted my wildlife rehabber/biologist friend Amanda Nimke Ballard for assistance. She graciously shared a few of her favorite photos of young raccoons in rehab before they were returned to the wild. She wrote:

“As a State of Michigan permitted wildlife rehabilitator, I have the unique opportunity to interact and learn about the animals, and birds who share our native habitats. Be it our backyards, or a larger natural area, they have a place too, and deserve our respect and compassion. Helping injured and orphaned wildlife brings my life more meaning and expands my humanity.”

As much as I love Amanda’s photos, I am in awe of the photo below of a raccoon posed in a pumpkin that was recently shared on the Western Kentucky Wildlife Rescue and Rehabilitation. Inc. Facebook Page: