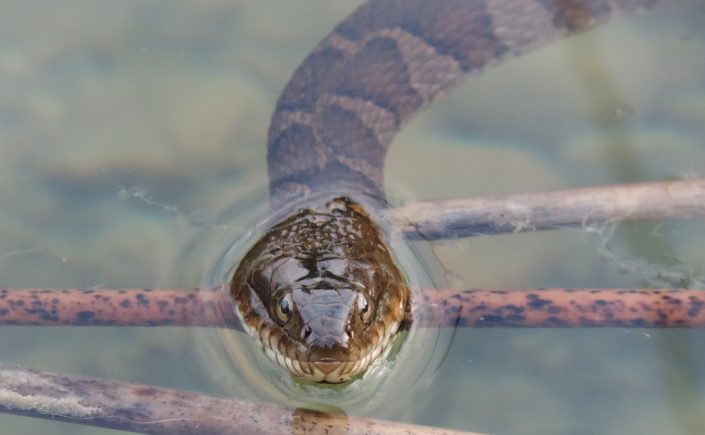 When a large northern water snake (Nerodia sipedon sipedon) swims alongside your canoe and then suddenly looks straight at you on a sultry summer day, one thing is certain; it has your undivided attention. Northern water snakes are one of the most common snakes of Oakland County and are frequently encountered as the days of summer sizzle on and we relax and recreate near ponds, lakes, marshes and rivers. They are often under-appreciated, and at times heavily feared because of their appearance and bold, opportunist behavior. Herpetologists and nature lovers in the know are enthralled with their behavior and patient observation helps to better understand their ways and coexist peacefully. Sadly, some people “know” they are venomous. They are not!

When it comes to nature’s way, facts should always outweigh fiction and phobias.

Northern water snakes are sometimes mistaken for water moccasins due to both having a fondness of water, and are subsequently killed out of foolish and fearful phobias. Water moccasins (cottonmouths), which are venomous, do not occur anywhere near Michigan. But both species have a fondness of water. I had a memorable close encounter with a water moccasin three years ago at Congaree National Park on the wilder side of South Carolina. I was hiking along a seldom used primitive backcountry trail and suddenly stopped on the trail when wild boars appeared in front of me. I glanced about for a detour, since I was not about to challenge them, and noticed a snake curled up in a sunny area about fifteen feet from the trail. At first glance, I thought it was a just a water snake.

However, being in a habitat I was unfamiliar with, and the boars standing their ground, my situational awareness kicked in. I walked closer to the snake and zoomed in with my telephoto lens when I was about six feet away. It was then I noticed its narrow elliptical (cat-like) shaped pupils and the heat-seeking ‘pits’ between their eyes and nostrils, characteristics of all pit-vipers- including the only venomous snake of Oakland County, the eastern massasauga rattlesnake. I knelt for a better view and watched it watch me for a few minutes as the boars continued on their way. I continued my hike feeling energized and excited by my first and only water moccasin encounter. The encounter gave me the realization that with just a casual glance our non-venomous northern water snakes, and the venomous water moccasins of the American Southeast do have a resemblance to each other as both species are usually, but not always, seen near water.

According to the University of Michigan’s Animal Diversity Web, northern water snakes dwell near any type of significant water source, such as rivers, lakes, ponds, and marshes. They prefer calm waters with vegetation. Thanks to the land carving work of the glaciers, much of Oakland County presents excellent habitat for reptiles and amphibians of all types including northern water snakes. Now that summer has arrived, they are seen basking on logs, rocks, and algae mats at the water’s edge, or swimming in shallow, weedy water as they hunt frogs, small fish, and crayfish.

Northern water snakes are extraordinary adaptable and opportunistic hunters. Several years ago, I witnessed that behavior on a fishing pier at Seven Lakes State Park in Holly. I was chatting with a family that was fishing when I noticed a water snake swimming near the pier. It circled around a wire basket that held recently caught Bluegill. I wondered if the snake noticed them, but I did not have to wonder long. It suddenly lunged forward and partially entered the basket for an easy meal. The snake struggled valiantly and unsuccessfully to pull a hapless Bluegill out through the mesh. After several attempts, while totally ignoring my presence as I leaned over the dock and took multiple photos, it backed out with some impressive slithering moves. Seconds later, it slithered rapidly up the outside of the basket, entered from the top, latched onto a Bluegill, and swam off with its well-deserved dinner.

Their diverse list of entrees, that includes small mammals and birds, hints at their opportunist behavior, a key to survival in semi-aquatic habitats. They will readily take a meadow vole or mouse in grasses at the water’s edge, and even a baby muskrat nibbling on shoreline vegetation. A red-winged blackbird on a low cattail stalk is just another meal for this stealthy hunter extraordinaire. However, their most common prey species are fish, frogs, crayfish, salamanders, small turtles, and —- other snakes. Contrary to a persistent myth, they are not constrictors. After a quick bite and rapid repositioning of the prey, they swallow the prey whole while it’s still alive.

Most encounters with northern water snakes are unplanned, but if you look for them they are not hard to spot. If you are paddling a kayak near weedy shallows, or wandering a trail near a bog, swamp, slow moving river, pond, flooded roadside ditch or beaver dam, just look about. They might be basking on rocks, floating logs, or even on low hanging branches above the water. When not sunning, they slither under logs or between rocks that keep them out of sight from their predators, however they are rarely seen on rainy days. Although chiefly active during the day, at times they are active in the evening and may surprise a twilight riverside camper.

I’ve been asked many times if these snakes are aggressive. Aggression is a matter of perception. If you leave the snake alone and do not approach it, that favor will be returned. However, they can and do defend themselves forcefully if provoked, and sometimes just getting too close is provocation enough. If feeling threatened, they won’t hesitate to defend themselves by striking repeatedly and defecating and releasing a foul smelling musk. A large northern water snake can inflict a painful bite which may bleed profusely since their saliva contains a mild anticoagulant. That rapid- fire strike and powerful bite is an excellent defensive mechanism against their natural predators which includes raccoons, Great Blue Herons, skunks, opossums, and even the occasional coyote or Red-Tailed Hawk. Though, I suspect it is less successful when a snapping turtle wants a meal.

While hiking at Highland State Recreation Area about five years ago, I spotted a large northern water snake sunning on a floating log and took a few photos from about 20-feet away. It was not until I returned home and looked more closely at the image that I noticed something else—a painted turtle hatchling was resting right alongside the snake. It was a strange sight indeed, for without a doubt that large snake could easily swallow the small turtle, and turtle hatchlings are part of the northern water snake’s normal diet.

The enlarged image on my computer screen also revealed a dull appearance in the snakes visible eye; an indication it was about to molt or “shed” its skin. I consulted with my Michigan State University herpetologist friend, Jim Harding, and he gave credence to my theory of the odd couple’s sunbathing co-existence. The snake had slithered onto the log to sunbathe. The turtle climbed up soon afterwards with the same plan. The still moist duckweed on the backs of both confirmed neither had been there very long. The turtle most likely was unaware of the snake and found a comfortable position resting against it. Harding informed me that snakes that are about to shed are not actively hunting prey and so the snake and the turtle sunned together with a degree of presumed blissful unawareness. Best friends forever on the wilder side of Oakland County? Not likely. I suspect a follow up encounter might have ended very differently.