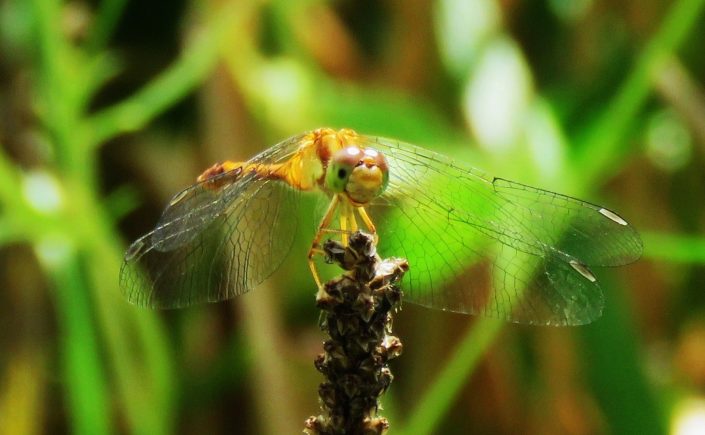 Dragonflies have ruled the skies of planet Earth since before the time of the great dinosaurs. They survived cataclysmic extinction events that eliminated other species and set back human evolution In the blink of an eye, dragonflies can change their flight direction, speed, and elevation with aerodynamic skills that even the most advanced, high-tech drone cannot master. Dragonflies can detect, track, pursue, intercept, catch, and consume flying prey that are plucked from the air. Perhaps this makes them one of nature’s finest tuned killing machines, true masters of aerial predation. Some of these perching “flying dragons” appear to smile, just as this Yellow-legged Meadowhawk seemed to do.

Dragonflies and damselflies patrol the sultry airspace above the wetlands, meadows, and our wide-open, sunny trails including the Michigan Air Line, Clinton River, Paint Creek, Polly Ann, and West Bloomfield trails. That fact alone makes them some of our very best friends because of their endless pursuit of mosquitos, deer flies, and horseflies. Contrary to myth, dragonflies do not have stingers, nor do they bite.

Both dragonflies and damselflies have stunningly beautiful, delicate, lacy wings that often appear transparent. They are classified under the Order Odonata, meaning “toothed ones,” a reference to their serrated jaws. They share habitats and behavioral habits; however, they are not the same species and one can usually tell them apart with just a casual glance. Dragonflies have a thick body and hold their wings stretched out and open at rest, such as this bright-green, female Eastern Pondhawk.

The far more dainty damselflies have thin bodies and their wings are closed, or just partially open, at rest, as clearly demonstrated by this brilliant, iridescent green River Jewelwing perched on a log near near streamside vegetation.

When it comes to identifying the dozens of species found in the Midwest, I remain a novice and struggle with positive identification confirmation. However, I have been greatly assisted in my quest after discovering a truly fantastic colorful guidebook titled, Stokes Beginner’s Guide to Dragonflies (2002), a pocket-sized guide that now accompanies me into the field.

It is not always easy to capture images of dragonflies, for they are very wary of movements, shadows, and disturbances. One of my favorite photo captures was totally by accident. I was tagging along with a Michigan DNR biologist at Kensington Metropark on an Osprey banding project. I had no idea, until after I reviewed my images, that I captured a photo of a pair of  Halloween Pennants mating in the security of the Osprey nest. They were locked in the traditional, heart-shaped mating position of dragonflies and damselflies.

Many dragonfly names are both colorful and intriguing, as is the case of the Widow Skimmer, a common species around our ponds. Unlike other species where males guard egg-laying females, the Widow Skimmer male abandons the female, “widowing” her as she lays her eggs just under the surface of weedy water.

One dragonfly species in particular deserves the name, “flying dragon,” and is gaining a lot of attention as summer sizzles on. The Common Green Darner, at almost three inches long, is one of the largest dragonflies of Michigan and is relativity easy to identify at rest and in flight. In many species of dragonflies, as with birds, the coloration of the female is rather drab, but that’s not the case with the Green Darner. The males have a bright, emerald green thorax, a mostly blue abdomen, and an eyespot on its head that gives it the appearance of a science-fiction cyclops, a giant one-eyed creature from Greek mythology. The females also have a green thorax, but their abdomen varies in color from what could be called a dull, brick red to a bright, violet-red color. Both the male and female have four large, almost transparent, outstretched wings that attach at the thorax and propel them through the sky at tremendous speeds. They are incredible hunters due to their excellent eyesight and their ability to maneuver and change flight direction almost instantaneously, often faster than the human eye can follow. Because of my inexperience in identification, my first two photo captures of what I thought were Green Darners turned out to be Eastern Pondhawks.

Green Darners and Eastern Pondhawks prey on mosquitoes, gnats, deer flies, horseflies, smaller dragonflies, and most anything else they can catch in flight. Some writers have shared dubious statements that were published years ago stating that darners catch and consume hummingbirds. This is not likely; I suspect that it’s more of a greatly exaggerated urban legend. The weight of a hummingbird would cause the dragonfly to crash downwards, and a hummingbird is more than a mouthful, even for an extraordinarily large Green Darner.

As for the name darner, it came to be because it is said that the common Green Darner resembles a darning needle. I confess, I had to google the words, “darning needle,” to see what darning needles look like and I failed to see any resemblance. Some literature states common Green Darners follow a steady back and forth flight pattern, but I’ve watched them closely and think their flight pattern is more flexible and most likely in response to available prey, other dragonflies that might be deemed a threat, and of course, the pursuit of mates.

While exploring one of my favorite secluded marshy areas, I noticed what I believed to be a Calico Pennant perched on twig, a new species for me. I got my camera ready as I spotted a male Green Darner zipping by in a blur over shallow, weedy waters, clashing at times with competing males and searching for females to mate with.

My camera missed an actual mating and I was not about to wade into a murky marsh of waist-deep water in pursuit, so here is how the Kids’ Inquiry of Diverse Species from the University of Michigan describes the natural mating process.

“To begin mating, a male usually just grabs a female, but the female chooses whether to mate. The male grasps the female by the top of the head with the end of his abdomen. The pair flies away from water together, and typically lands on vegetation. To mate, the female swings the end of her abdomen up to the front part of his abdomen, called the “wheel position”. Both males and females mate many times with different mates. Females often have marks on their heads from being grasped by the males, and males may also have marks as well.”

Once mating is complete, common green darners remain hooked up in tandem, which I was able to capture here. However, the process actually began when the male, in this case the dragonfly with the blue abdomen in the front, grabbed his green female partner by the back of her neck with claspers at the end of his abdomen that fit into a species-specific grooves in the female. The coupled pair then flew low over the water until they found the perfect place to land on moist vegetation for their egg laying mission.

I had barely returned home from my marsh trek when I noticed another dragonfly in my meadow, just yards away from my beehive, exhibiting high-speed maneuvers that I could barely follow with my eyes. Suddenly, it landed about 50 feet away. I walked closer for a look and discovered it was another Eastern Meadowhawk that was feasting on a fresh capture. That fresh capture was a horsefly secured in its powerful jaws, another reason to love the dragonflies in our midst, even if they gulp down the occasional honey bee from my hive in the wilder side of Oakland County.

4 thoughts on “Flying Dragons of Summer!”