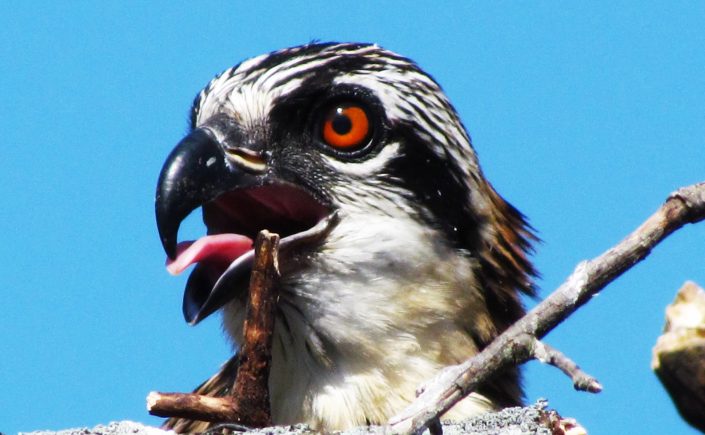 Majestic! Magnificent! Unforgettable! Those three words do a superb job of describing an Osprey’s behavior when it’s time to fish for dinner. Ospreys are amazing fish-hunting birds that are found along ocean coasts as well as the shorelines of many large lakes and wide rivers on all continents, excluding Antarctica. They are a truly remarkable raptors, well deserving of their colloquial name, the Fish-Hawk.

Ospreys are no longer a rare sight in Oakland County. By the late 1960s, their population across much of the nation was plummeting due to habitat disturbances and at times destruction. The widespread use of DDT (a pesticide that caused extreme thinness to eggshells) also lead to many nesting failures.

In 1972 DDT was finally banned in the United States, but ospreys still needed significant help to restore their populations back into their natural habitats which included southeast Michigan. In 1998, Huron-Clinton Metroparks took an active lead in that goal. In conjunction with the DNR wildlife division, Detroit Zoological Society, and DTE, they created a science-based project to reintroduce Ospreys into the southern half of the Lower Peninsula. Osprey Hacking was adopted for use in reintroduction programs, because it is an effective way to raise and release birds, particularly raptors, into the wild. Kensington Metropark became ground zero for that project, with the construction of a hacking tower along the southeast shore of Wildwing Lake.

Male Osprey chicks were raised and released from that site with the hope that once mature, they would fly south in autumn and return with mates to seek nesting sites in our region.  The goal of the reintroduction project was to have 30 self-sustaining nesting pairs in southeast Michigan by 2020. With the dedicated support of many volunteers as well as Metropark and DNR employees, the goal was reached in 2010 – a decade ahead of schedule. This serves as a reminder that nature often finds a way, with a little help from human friends.

As their population began to climb, I had the opportunity to tag along with Michigan DNR wildlife biologist, Julie Oakes, as she worked in the field taking blood samples and measurements of still flightless Ospreys at new nesting sites, including one at Kensington Metropark that was reachable by kayak. The Ospreys were banded and some equipped with lightweight satellite transmitters to follow their migrations and increase our knowledge of their routes and possible hazards along the way. Michiganosprey.org has more info on migration and will let you track autumn migration of satellite transmitter equipped Osprey.

Accessing Osprey nests to work with a young flightless bird is not as easy it may sound. Protective adults are well-equipped to defend their nests against other creatures, including intruding humans. To add to the challenge most Ospreys in Oakland County construct their nests high up on cell tower platforms that provide a commanding view of the landscape and nearby lakes. Professional climbers, hired by cell companies, rose to that challenge and worked with the DNR. I often had “front row seats” for photo opportunities and witnessed some dramatic swoops by adult Ospreys at the climbers as they would remove a chick from a nest and descend with it for their “exam” and transmitter outfitting.  The protective dive-bombing would continue when the climber returned with their chick.

Fast forward to July 2020:  I contacted Oakes for an update on the status of Ospreys in Oakland County and some fact-checking.  Here’s what she wrote.

“As the osprey are expanding throughout Michigan we (DNR) have had to rely on help from citizen scientists to help monitor the nests and report to us on the success of osprey nests in their areas. DNR has been working with MI Birds, Detroit Zoo, and USDA APHIS, to try to monitor nests and keep track of nesting success on osprey. The volunteers have been monumental in helping us monitor Osprey in Michigan. Last year volunteers monitored 21 nests in Oakland County alone. Historically osprey nested on snags (dead trees) in the water. But as very few of these exist in our lakes, they now rely on manmade structures. In Oakland County most the osprey nests are located on cell towers. From a birds eye view, the cell towers offer the birds the ability to see nearby water, and lack predators such as owls, so they have found them a perfect nesting spot. Cell tower companies are very supportive of the nests and when avoid working and construction on the towers that have active nests, until the birds have headed south in the fall.”

Biologist Oakes also asked me that if people are interested in monitoring osprey nest sites as citizen-scientists and help with the “adopt an osprey nest program” they should email her at oakesj@michigan.gov.

I have an assortment of Osprey photos from my encounters with the DNR, (some of which appear in this blog) but I knew I needed to contact my birder friend, Joan Zeller Bonin, who has spent countless hours at Stony Creek Metropark monitoring an Osprey nest in the Inwood Road section. For the  past 8 years she’s  been updating Huron Clinton Metropark Authority and Michigan Osprey  on that cell tower nesting activity. In addition to being a highly skilled Osprey nest observer, she is also an accomplished photographer and has captured truly amazing images of Osprey in flight and their behavior at the nest. She has graciously shared some dramatic images with us and they are so credited and captioned. Some of her Osprey observation days are slow, while others are heart-pounding with excitement. This is one of my favorite comments of her descriptive notes:

“The osprey will dive bomb the neighboring Bald Eagles who nest approximately ¾ mile way, and people passing by. She is brave beyond measure. She knows she can outmaneuver almost everyone”.

The real show for human observers begins when it’s time for dinner. Ospreys search for fish by flying on steady wingbeats or circling high in the sky over relatively shallow water. During times like that, they are sometimes confused with Bald Eagles. They often hover briefly before diving at visualized prey and then the Osprey does an amazing power dive with its wings partially closed and its long-curved talons stretched forward. Their impact with the water sometimes sends a curtain of water splashing upwards and then seconds later the Osprey emerges with the hapless fish locked in its talons. An Osprey can plunge so forcefully into the water that it will sometimes completely submerge. When emerging, it will shake itself off almost in the same fashion of Labrador Retriever emerging from a pond.

The more one watches Osprey behavior, the more they appreciate subtle aspects of their fishing technique; a technique that is a highly specialized gift of evolution well adapted to the shallow glacial lakes of Oakland County. Ospreys are unusual among the great variety of our planet’s raptors in the fact that they have a reversible outer toe that allows them to grasp with two toes in front and two behind,  a physical characteristic shared by owls. All toes equipped with lethal weapons—sharp curved talons, a physical characteristic shared by owls. Ospreys also have barbed pads on the soles of their feet that assist them in firmly gripping squirming, slippery fish. Perhaps their most unusual and efficient act is that they align the captured still, wiggling fish upright, with its head forward, an aerodynamic position for transport with minimal wind resistance.

There is still much to be learned about the Ospreys of Oakland County, but one thing is certain. If the hungry youngsters back at the nest with wide open mouths were to ask the adults, “What’s for dinner?” the answer would always be the same, “Fish! Did you forget we are the mighty fish-hawks of the wilder side of Oakland County?”

5 thoughts on “The Mighty Osprey!”