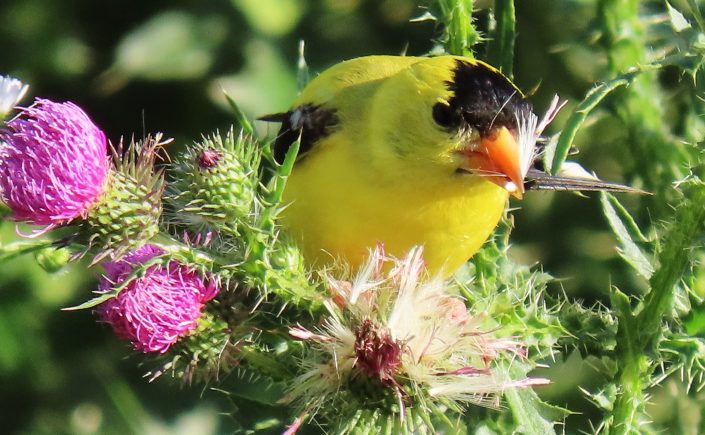 The American Goldfinch is among the most colorful and musical bird you will find in an Oakland County summer. Even a novice birder, such as myself, can identify Goldfinches with ease. Goldfinches are members of the finch family, as their name implies, and are not “wild canaries” as they are sometimes mistakenly called. The male’s eye-catching, gold and black plumage of summer is unmistakable. With a bit of experience, Goldfinches are recognizable from the distance by both their undulating, roller coaster like flight pattern and flight song. They thrive in the rural, thistle-rich fields of our county and are very much at home in the open spaces of parks, trail edge zones, and many of our urban and suburban neighborhoods.

I have a large thistle field that lures in Goldfinches, along with honey bees and butterflies. I’ve noticed that the Goldfinches, that are almost constantly in that field, possess acrobatic skills, amazing dexterity, and have the ability to cling and balance while almost upside down. Perhaps that lets them feast on thistle seeds that are unavailable to other species.

I feel fortunate to see Goldfinches daily as summer sizzles on. They flit about my thistle field and pay frequent visits to a bird bath a few yards from my rustic arbor. My numerous hours in the shade of the arbor have also led to another discovery. The Goldfinches that perch above my outdoor writing space and frequent the bird bath do not just splash about as the other species do, but instead, perch at the edge and sip water frequently. My knowledgeable birder friends explained that they need to drink water often because they have a diet that is almost entirely vegetation, and mostly seeds.

I’ve known for a long time, through casual observation, that Goldfinches seem to have a “special relationship” with thistle fields. It was only a few years ago that I discovered there is more to the story of Goldfinches and thistles than I knew. Goldfinches apparently wait to nest until thistle seeds emerge and then use the fluffy thistledown as building material to line their nests. Assumptions are often wrong when it comes to observing wildlife behavior, but it is safe to assume that if you have a healthy patch of thistles, you also have Goldfinches.

Goldfinch nesting season is later than most Michigan birds and coincides with the flowering of thistle, which is mid-July to August in our area. Several years ago, in the first week of August, I discovered a Goldfinch nest a few hundred feet from my house. The nest was lined with thistledown and pine needles. I snapped a few images of the hatchlings as the adults flitted about on food gathering missions and came back for more photos about ten days later as hungry hatchlings approached adult size. I noticed very quickly, after I backed away from the nest, that both the male and female Goldfinch seemed to take an active role in feeding their young. A bit of research revealed that a significant part of the hatchling’s diet is – you guessed it, thistle seeds. In this case however, the seeds are first consumed by the adults and then regurgitated to the young back at the nest.

The thistle-Goldfinch relationship has another interesting aspect, and that involves the Brown-headed Cowbird. The Brown-headed Cowbird is a species that also does well in Oakland County, but is rightfully considered a “nest parasite.” The Cornell Lab of Ornithology explains the Cowbird’s parasitic behavior as follows.

“Females forgo building nests and instead put all their energy into producing eggs, sometimes more than three dozen a summer. These they lay in the nests of other birds, abandoning their young to foster parents, usually at the expense of at least some of the host’s own chicks.”

If a Brown-headed Cowbird lays eggs in a Goldfinch’s nest, as it sometimes will, it does not work out well for the newly hatched Cowbirds because they cannot survive on the Goldfinch’s late summer vegetarian diet that consists of chiefly thistle seed.

Every now and then, someone reaches out to me in winter and requests identification of a bird at their feeder that looks like a Goldfinch, but does not have the right color. After looking at their photo captures, I almost always assure them that they are seeing Goldfinches, but they are dressed in “winter clothes.” Unlike most songbirds that molt only once a year, the America Goldfinch molts completely twice a year. They will molt in late August and again the next spring, which is when we first take notice of the brilliant gold and black plumage of the males that we see now. Female Goldfinches never have the brilliant gold of the male birds and have more of a yellowish-green color. Females also have black wings in summer that will turn into a grayish-brown, winter color with almost no yellow. The males lose all their brilliance in the winter as well. The color difference in summer between the sexes is dramatic and very easy to notice both amidst the thistles, and at my bird bath where a pair of Goldfinches frequently appear together to dip and sip.

On these sizzling hot days of summer, it’s hard to even think about winter. The truth is, the days are getting shorter and in a few more months, bird-watching attention turns to setting up backyard bird feeders for the “winter birds.” Goldfinches do not migrate out of Michigan and are very much at home in our county all winter, especially if you have a well-stocked bird feeder. It’s easy to attract them with most any type of feeder and most any type of seed, especially sunflower seeds. If you want to ensure your success, invite them with what they love the very most, thistle seeds. For thistle seeds are nature’s gift to the Goldfinches that thrive in the wilder side of Oakland County.