Time again to take a look at the wilder side of Oakland County!

I have been an unabashed admirer of skunk cabbage ever since I was a six-year -old  barefooted swamp- tromping adventurer in the backwoods of rural Connecticut.  Much has changed over the years, but as the first wafts of warm air excite us and chickadees sing their prelude to spring, I am once again in search of skunk cabbage, now armed with a compass, camera and an old mercury thermometer. There is far more to the wonders of skunk cabbage than meets the casual eye.

Skunk cabbage (Symplocarpus foetidus) is a common large-leafed plant of wooded wetlands.  Sometimes in summer, hundreds of the skunk cabbage plants in the same habitat create great carpets of green-hued shade for wood frogs, salamanders and insects of every shape and size.  When the leaves are crushed or bruised they emit a pungent odor that bears resemblance to the aroma of a skunk. 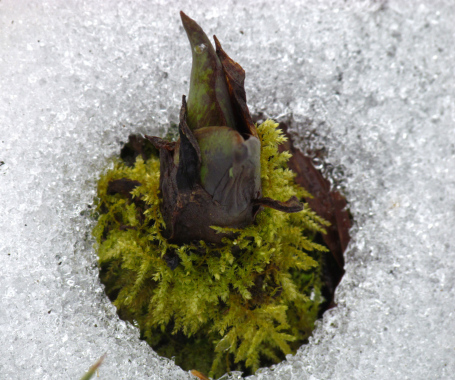 A walk in the woods of March opens the door to witnessing something truly amazing; the snow-melting ability of this wooded wetland wizard of the plant world.    Skunk cabbage creates its own heat and a gently inserted thermometer confirms what botanists have discovered; the temperature inside the flower head remains almost 20-30 degrees warmer than that of the outside air temperature during the season of snow melt.   A keen-eyed observer of the natural world will discover the emerging hood -like leaves that enclose the hidden flowers of the skunk cabbage actually melt the snow and ice around the plant creating small circles of green on the forest floor.  Not many hikers travel with a thermometer  but a  finger resting against the inner sides of the cavity that is formed by the spathe ( a  leaf-like bract that encloses a flower cluster) will detect  heat created by the breaking down of organic substances within the plant while using oxygen.    In 1974 Biologist Roger Knutson discovered that skunk cabbage regulates warmth in much the same manner as a warm-blooded mammal. 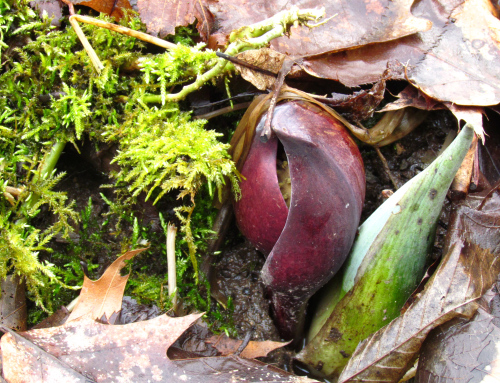 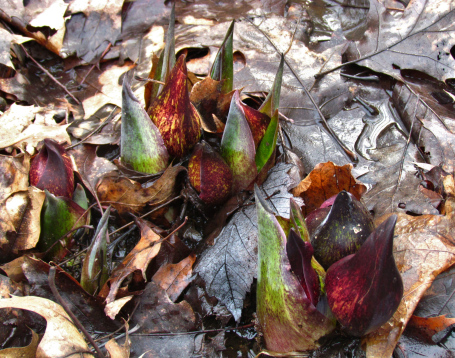 At age six I was in love with the skunk cabbage for its “stink”. That love affair continues today. I take great pleasure in sitting silently on woodland hillside next to small creek near a patch of emerging skunk cabbage. I admire their deep maroon or sometime reddish spiraled hoods with occasional dramatic dashes of yellow and watch a secret world unfold.  Sometimes I see tiny insects climb or fly into the hidden micro-climate of plant produced warmth while the rest of the hillside remains laced in crunchy snow.  Whether they enter for warmth or for pollination is a mystery they keep to themselves. But what I do know is this: the secret life of skunk cabbage lets me be a kid again; thirsty for more natural world wonders to unfold.

8 thoughts on “Skunk Cabbage – Snow Melting Wizard of the Woods!”