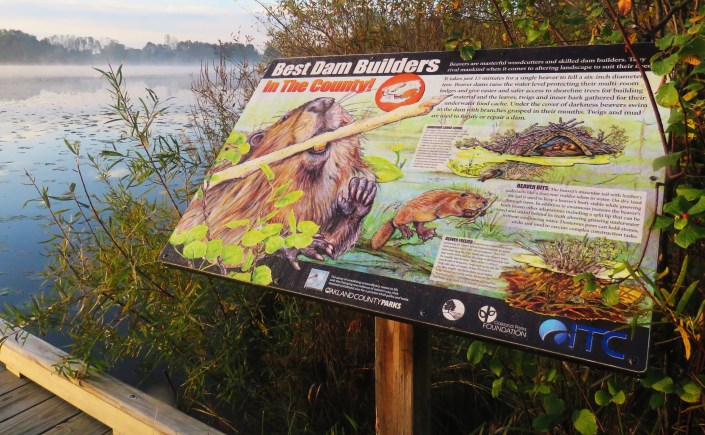 The days are short, and darkness comes all too soon. The dawn of winter draws near. We may feel sleepy at times, but there is no long winter nap awaiting the beaver (Castor canadensis,) the largest rodent of North America. Contrary to the belief of some, beavers do not hibernate. Beavers are true architects of the wildlife world. Although these highly-skilled engineers are almost never seen in winter, the evidence of their activity is everywhere, from the most rural sections of our county to the wooded banks of the Clinton River in the city of Pontiac.

Winter is my favorite time to explore the world of the beaver. For with leaves down, it’s easier to spot their lodges and bark-bare branches floating in open water or trapped under clear ice. According to the Huron River Watershed Council:

“Beavers are known as ecosystem engineers. Their construction of dams in rivers and creeks can significantly affect regional hydrology and habitat.”

I look at these semi-aquatic creatures as the best dam builders of Oakland County. Without a doubt, they are second only to humans in their ability to alter habitat to suit their needs. If only one word could be used to describe the abilities of beavers, I would choose: “amazing.”

Beavers have been “busy as beavers” for the past few months. They added fresh mud to their lodges and felled more trees to create stockpiles of twigs and branches for a winter food pantry, or food cache. Although beavers in our county construct relatively small dams to alter water levels in our rivers and streams, the glaciers gifted them with hundreds of ponds and small lakes, most of which have sufficient depth where a dam is not needed to raise the water level.

But when a dam is constructed, water levels rise upstream of the dam and create a safe habitat for lodge construction. These higher levels also provide a slower current for beavers to forage for food and float harvested branches for construction projects in almost the same way a tugboat moves supplies on water highways. River dams, even when small, can create exciting challenges for kayakers. I’ve navigated my kayak over a small beaver dam on a section of the Shiawassee River between Holly and Fenton several times.

Beaver lodges draw plenty of attention, regardless of where they are built. They are usually surrounded by enough water to be safe from two-legged and four-legged intruders, but close enough to the shore for easy forays to gather food and building supplies. I had the pleasure of working with Jon Noyes, principal planner at Oakland County Parks and Recreation, to help create interpretive signage about the life of beavers, especially their lodges. These colorful signs have been in place in our county parks for about six years at locations where beaver activity is well-established. However, even without signs to draw attention to these amazing creatures, their craftsmanship is unmistakable.

Small saplings that have been felled and dragged into the water are often overlooked. However, mature trees that are felled draw attention, especially when cuts made by beavers result in large trees tumbling in such a fashion that they get hung up in other large trees and never reach the ground. Such was the case with this extremely large, eye-catching aspen last winter.

But when it all goes to plan — and it usually does — the inner soft bark, known as the cambium layer, is consumed on site as a nutritious meal. Small branches are then cut and dragged into the water for winter use. Some are added to the lodge as reinforcement, but many saplings are placed underwater near the lodge as a food cache. Depending on the depth of the lake and the beaver’s preference, the branches are usually partially embedded in the bottom with the tops sticking out above the water. Perhaps this intercepts enough snow to create an insulated layer to prevent water from freezing around the food supply. When it’s time to eat, all the beaver needs to do is swim out of an underwater entrance of the lodge to the cache, harvest a branch from the underwater stockpile, and swim back to the lodge to consume it while safe and secure on a raised platform within the lodge.

Beaver dams and lodges are amazingly well-engineered structures that may be used for years. The lodge usually has multiple dens or platforms within, one for resting and sleeping, one for feeding, and almost always, at least two underwater tunnels that can also serve as an escape hatch. And of course, the lodge also has an air vent above the water level. Both the feeding and resting platforms are about six inches above the water level, making for cozy living and dining, even if a winter blizzard rages.

Last week, a friend of mine from Springfield Township informed me that there was a large beaver lodge on an island in a shallow lake in his subdivision. Although he had not seen any beaver activity, his neighbors knew where one would come ashore and stated that they see the beaver occasionally. My curiosity was piqued, but I was perplexed since beavers are shy of humans, rarely seen in the daylight, and it’s late in the season for a beaver to waddle ashore. I packed my motion-activated trail camera and headed to the lake. The lodge was impressively large, and a sizable food cache (circled in red in image below) was immediately adjacent to the lodge.

I set my camera trap at the site where the beaver was seen coming ashore. Circumstantial evidence was strong. Chewed stumps and a recently felled tree, minus its bark and side limbs, were about 20 feet from the water, but there was no evidence of drag marks made by the beaver.

I checked the camera four days later and had dozens of photos of rabbits, Blue Jays, cardinals, and Black-capped Chickadees. Even a mouse, along with multiple images of a muskrat were captured by the camera, but no beaver. I then noticed there was a muskrat lodge in the shallows, about 40 feet from the camera, a lodge that was just a few hundred feet from the much larger beaver lodge.

A muskrat lodge is a dome-shaped structure that looks a bit like a dead heap of vegetation. The interior, however, if you are muskrat, is quite cozy. On occasion, a Canada Goose will use the top of a large muskrat lodge as a perfect nesting site! The physical evidence of the homes of both beavers and muskrats in the same shallow and rather weedy corner of the lake, reminded me that the only two semi-aquatic mammals of our county often share habitat. This means identification confusion is common. I believe the “beaver” my friend’s neighbors were seeing was, in actuality, a muskrat.

“It’s a muskrat!” “No, it’s beaver!” “No, it’s really a muskrat!” “Maybe it’s a baby beaver!” I’ve witnessed those excited, good-natured exchanges when a sighting is made while leading shoreline hikes. In all but one case, the mysterious mammal in the water turned out to be a muskrat, a less wary, day-active creature that is far more common than a beaver. I frequently see and sometimes photograph muskrats feeding on floating vegetation. Finally, last spring I managed to photograph a young beaver munching on vegetation in the shallows of a pond not far from my house.

There are ways to tell them apart, especially if witnessed swimming. When a beaver is swimming, usually only its large, rather wedge-shaped head is visible. Most of the muskrat’s body is visible when it’s swimming, and if they wander about on the surface of the ice — something beavers rarely, if ever do — the muskrat’s skinny tail is obvious.

With a bit of experience, it’s extremely easy to tell their lodges apart. The muskrat builds a small, somewhat pointed structure, which in our area is usually constructed of cattails and well hidden in a cattail marsh. The beaver lodge is far more fort-like and, even at a glance, appears massive. It’s constructed of wood with mud added and may be up to six feet high. Some have a diameter exceeding ten feet. It’s a rather appealing and spacious structure, especially as winter approaches. Both muskrat and beaver lodges will soon be covered with snow, adding a blanket of insulation.

Muskrats will occasionally overwinter within an active beaver lodge. Perhaps the warm-blooded intruder creates more warmth, or the muskrat just serves as extra eyes to see what’s moving about. Mink, Red-tailed Hawks, coyotes, and foxes all pose as threats to beaver kits and muskrats. Or perhaps, I imagine that they are just friends. “Sure there’s room,” the beaver could say to the muskrat, “Just sleep over there in the corner.” I once paddled my canoe near an active beaver lodge with an addition, perhaps it served as an apartment for house guests. Either way, it was an atypical and exciting find.

I’ve tried many times to capture the work of beavers on motion-activated trail cameras and have yet to succeed in capturing images of tree gnawing. I have, however, captured other surprise creatures that entered the scene as these two short daytime clips clearly illustrate. Watch here:

Early last summer, I finally managed to capture a few seconds of a beaver emerging from a wooded area during the night.

Then, about an hour later, my second trail camera, which was placed about 30 yards from the first, captured the beaver working its way down a small canal it created to return to its lodge. Watch here:

Until spring arrives, beavers will be in their lodges or swimming under the ice in their watery world, a world they are well adapted to. Beavers can hold their breath for fifteen minutes underwater, and they have a set of transparent eyelids that serve as goggles. They also have a dense, waterproof pelt and small nostrils that close for swimming underwater. Their flat and large flexible tail functions as a four-way rudder and can be used to warn of danger by snapping it loudly on the surface. When a beaver ventures onto land, its tail functions as a prop for gnawing on upright tree trunks. Their front paws, which they are very skilled at using, have blunt claws that are perfect for carrying branches or mud, and for carrying out other engineering feats.

Beaver kits are born in the spring after a 100-day gestation period, which rapidly accelerates beaver activity on the shore. I will be waiting for ice-out with my motion-activated camera traps ready. I am hoping for action shots of our amazing beavers masterfully carving and felling trees, for they truly are the best dam engineers of our county.