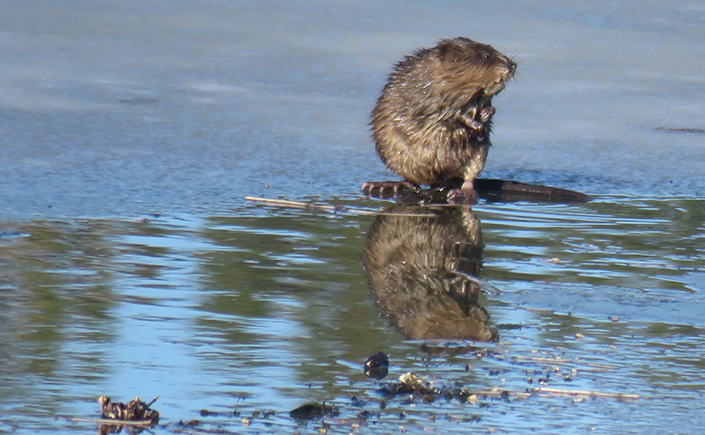 The woods fell silent last Friday afternoon as I slowly made my way along a seldom used trail, perfect conditions for my stealthy approach with a photographic mission in mind. My plan was very simple: photograph Black-capped Chickadees that frequent a sheltered thicket on a bluff that overlooks a small lake. I expected those boisterous little fellows to greet me with their cheerful chickadee-dee-dee melody. I was certain they would, for with the sky a radiant shade of blue and the mercury climbing over the fifty degree mark, the chickadees would be flitting about and singing like it was spring.

My stealthy approach failed and not a chickadee was in sight.

John Muir once penned, “In every walk with nature one receives far more than he seeks.” My failed photo mission was no exception to Muir’s timeless words, for not a single chickadee appeared. However, just as I turned to leave the lakeshore, I noticed movement on the thin ice that covered most of the lake. A muskrat! That rather rotund creature materialized almost magically, and it certainly had not scurried across the ice from its shoreline lodge over a hundred yards away. And then another appeared. And another. In a few minutes, five muskrats were visible and they were all emerging from melt holes in the ice carrying vegetation in their front paws and mouths. I was about to witness a muskrat picnic on ice.

The chickadees could wait for another day, and so I knelt down on the muddy bluff and pushed my camera lens to the maximum to spy on their unseasonal social activities, that seemed terribly out-of-place for winter. Their activity is perhaps best explained with a crash-course on “Muskrat Biology 101.” 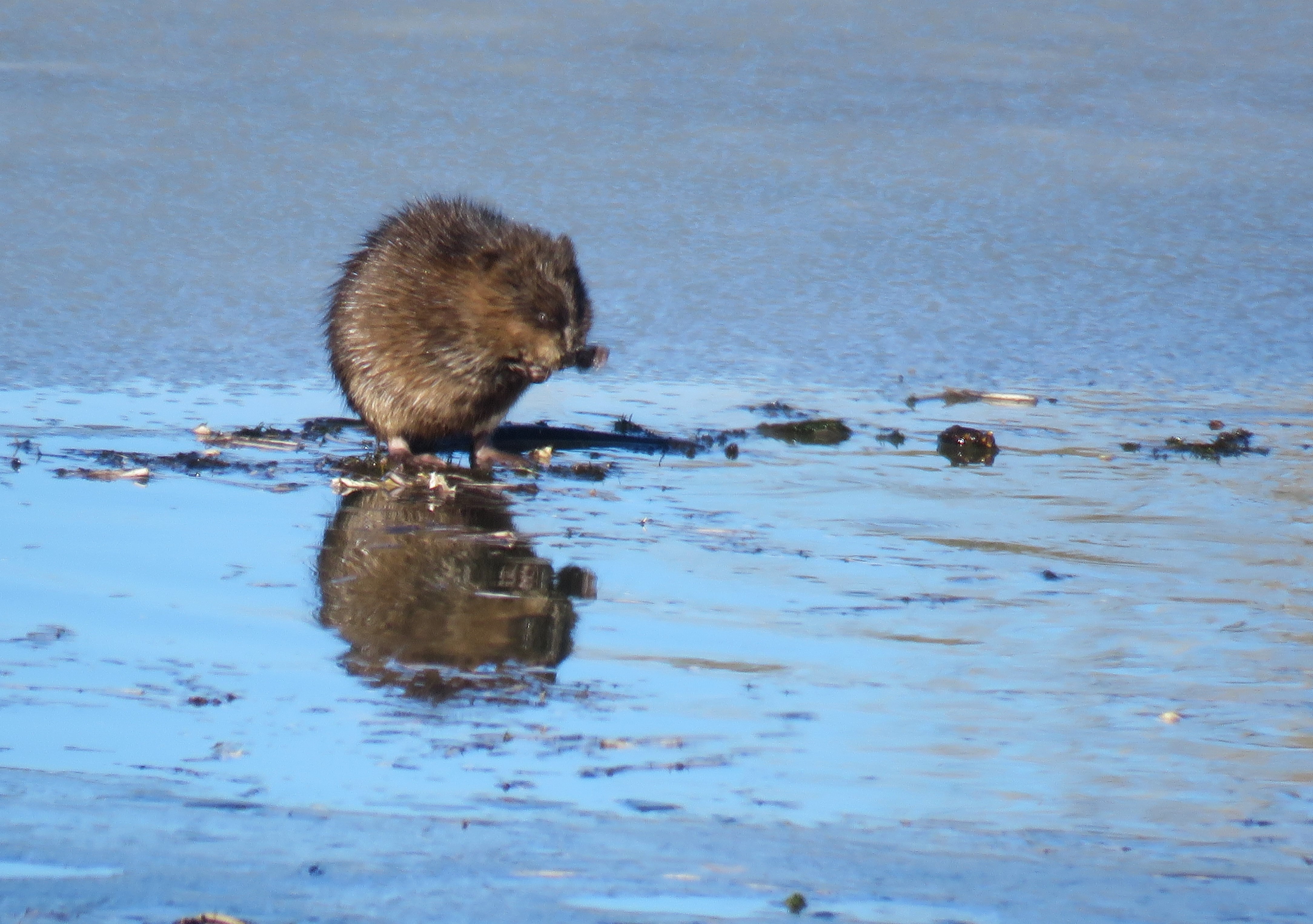 Back when winter was really winter, muskrats would be snug in their winter retreats: dome-shaped lodges created mostly from the stems and roots of aquatic and shoreline vegetation, with cattails being the primary building material in Oakland County. Those lakeshore lodges are reinforced with mud and keep the muskrats safe from cold biting winds and most predators, as long as they don’t venture out. During normal winters, thick ice and heavy snow restrict muskrats to the lodge interior and the dark, watery environment beneath the ice. Foraging for food underwater, however, is not the issue one may think it would be, for they also create push-ups just when ice begins to form. 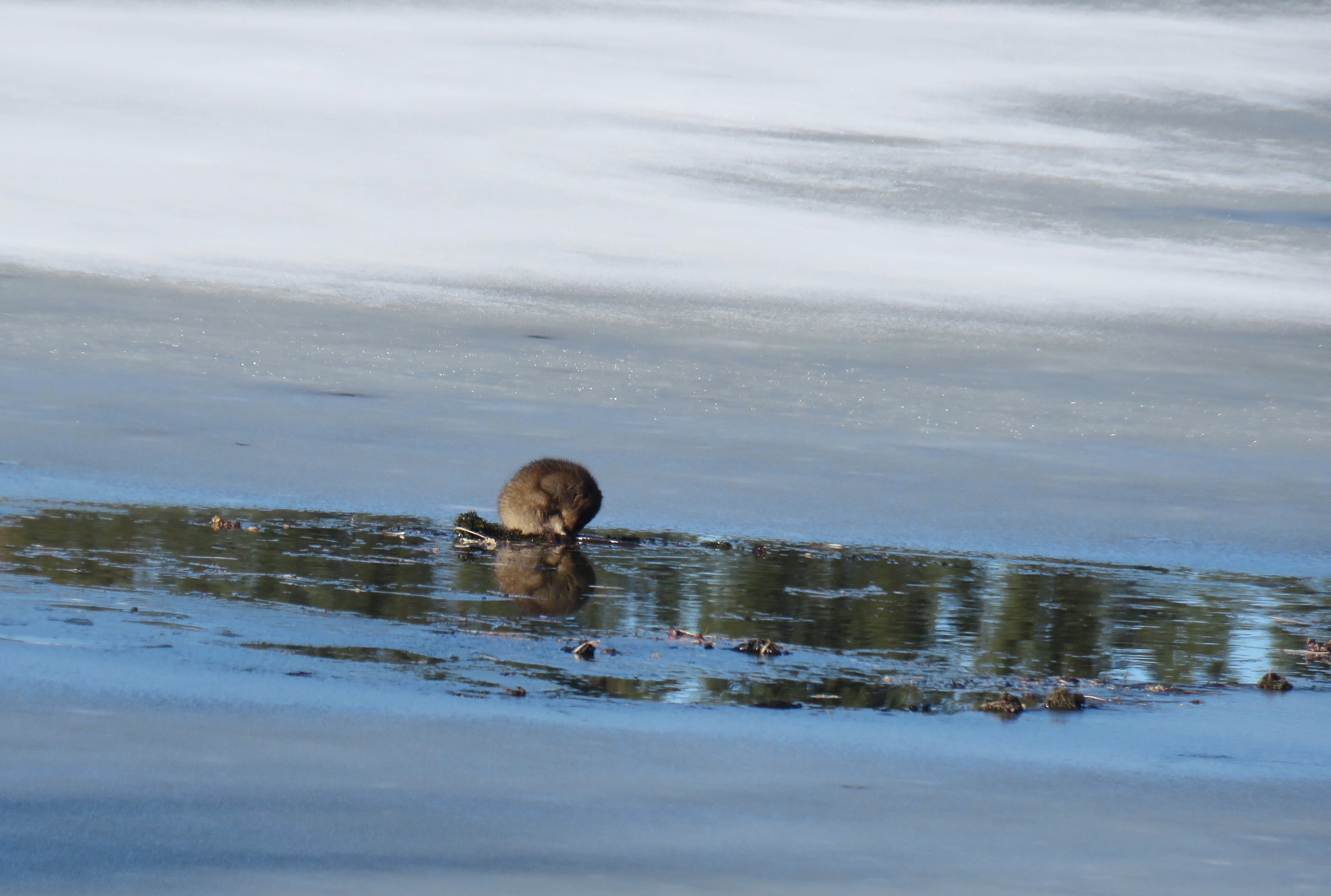 To create those aptly named push-ups, the muskrat first creates a hole in very thin, newly formed ice. Then masses of vegetation are collected from underwater and pushed up through the holes or cracks in the ice, creating a slightly pointed dome-shaped structure. After the push-up freezes solid, they serve as resting places, hidden feeding stations, and breathing holes for the underwater forays of muskrats. The push-ups become critical for survival during severe winters, for the muskrat may have to travel a relativity long distance underwater in search of vegetation which it will then carry to the nearest push-up to consume. I look at push-ups as the equivalent of rest areas on our interstate system, a safe place to rest and eat. 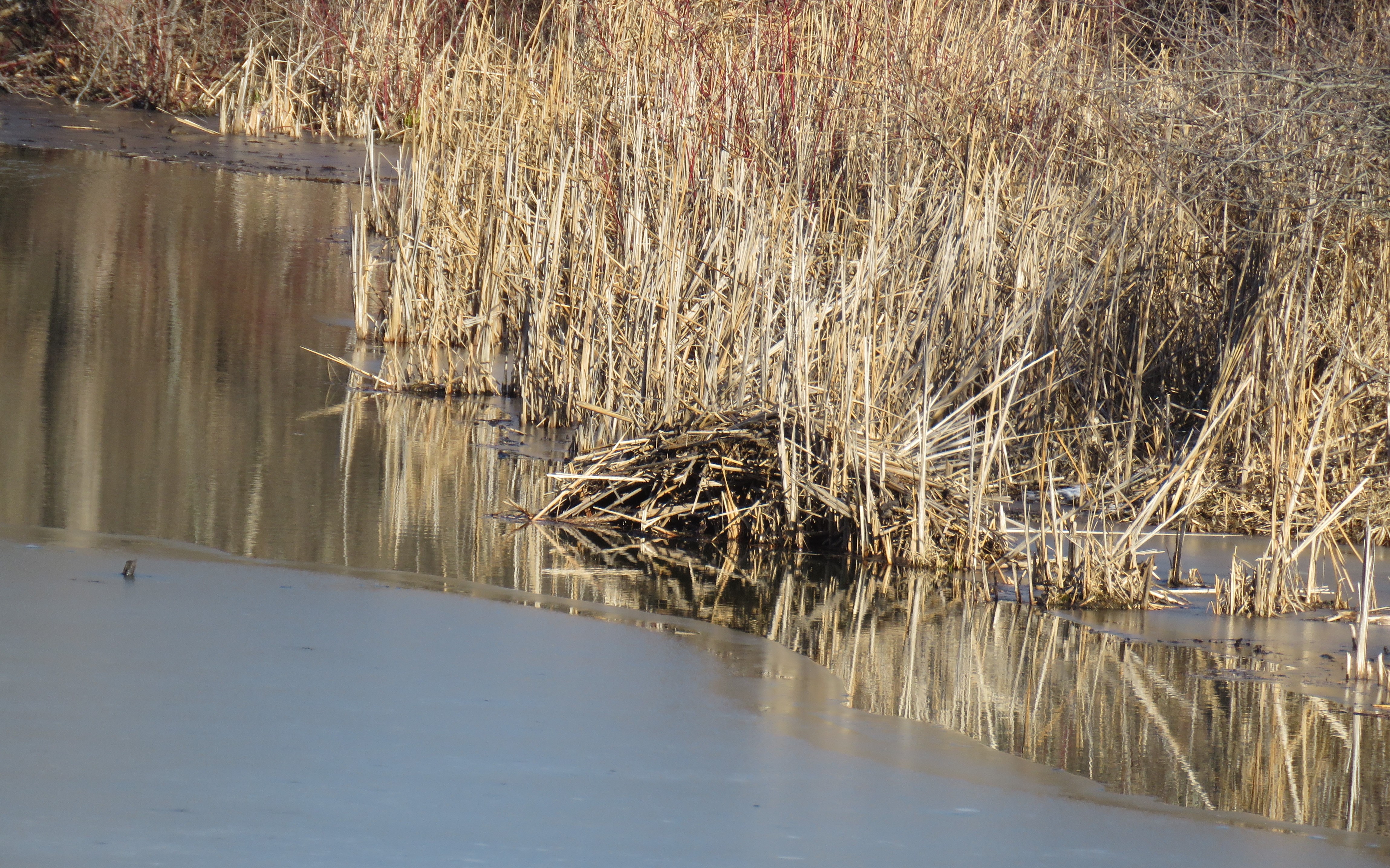 But last Friday, the muskrats had another plan: a picnic on the ice. And why not? I suspect the bright rays of sunshine illuminating open patches of water lured them to the surface. After all, why feed in the dark in a cramped push-up when the sunny surface provided a place for a social feeding and grooming gathering. Perhaps the brief warm spell also stirred cabin fever, and the muskrats, like humans, were out “enjoying” their day. And at the risk of sounding anthropomorphic; they appeared to be exhibiting relaxed and “happy” behavior. Without question, they were having a topside feast. 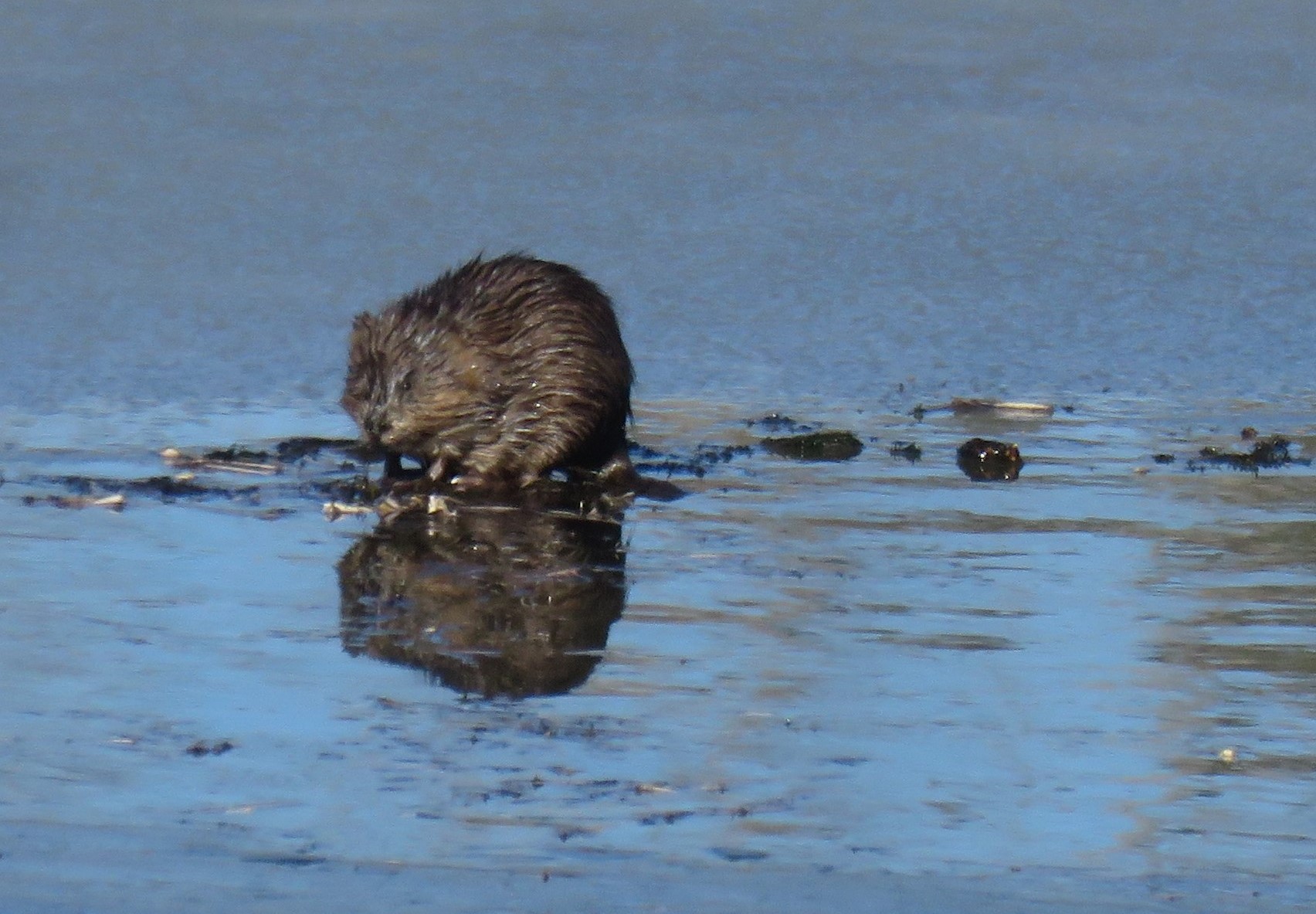 Every now and then, one of the muskrats would briefly slip back into the icy water of the shallow lake, only to reappear moments later with more food, reminding me of summer barbecues when humans keep getting back in line for seconds. Swimming is what muskrats do best. They are masterful swimmers and well adapted to their semi-aquatic life style. They have evolved physical characteristics for life in our lakes and marshes, including thick waterproof fur, large hind feet that assist in swimming with specialized hairs that give feet a paddle-like effect and a hairless tail that’s flattened on the sides and serves as a rudder. But perhaps their strangest adaption is their ability to chew under water, a feat not needed during a topside picnic and best described by the Canadian Wildlife Federation:

“The muskrat’s front teeth are especially modified for underwater chewing. Non-aquatic mammals such as dogs or humans would have great difficulty in trying to chew on a large object under water, because water would enter the mouth, throat, and nasal passages. This problem has been overcome in the muskrat through the evolution of incisors, or cutting teeth, that protrude ahead of the cheeks and of lips that can close behind the teeth. This adaptation permits the muskrat to chew on stems and roots under water ‘with its mouth closed.’ “ 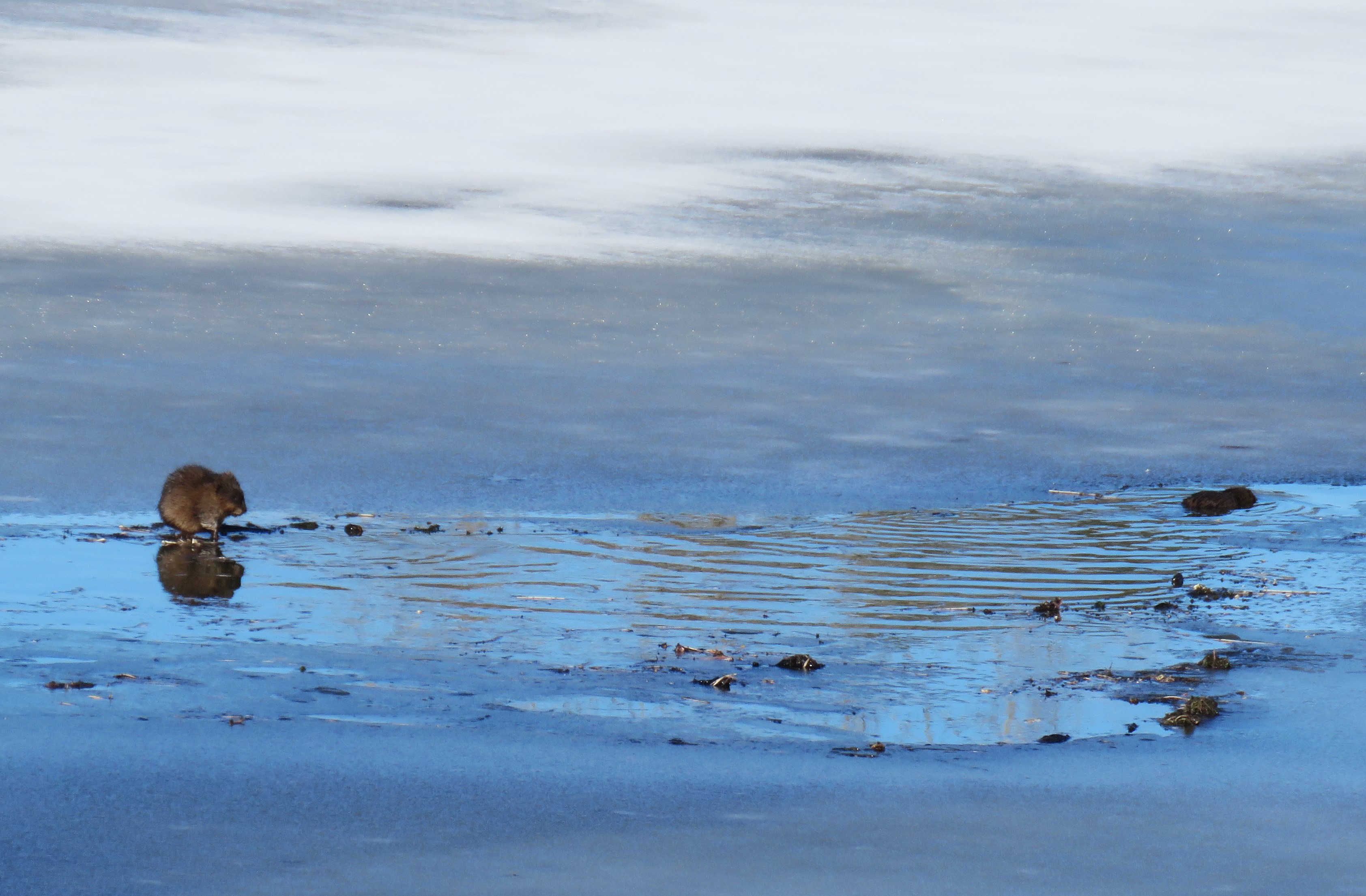 I watched the muskrats for almost an hour, and do not think they noticed my motionless presence on the bluff. Awareness, however, is a critical factor for their survival, for their winter list of predators is long, and exposed land and ice travel pose extreme risk. Coyotes, foxes and mink will all take a muskrat if given the opportunity. Danger also comes from the sky. Great Horned Owls and large hawks, especially the Red-tailed Hawk, are known hunters of muskrats on exposed shorelines. This point was reinforced when I returned to the lakeshore on Saturday, another sunny and relatively warm day, in hopes of capturing more muskrat picnic photos. A Red-tailed Hawk was perched on a tree limb overlooking the lake. I wondered if the hawk knew what I knew and was waiting for the next muskrat picnic to begin. 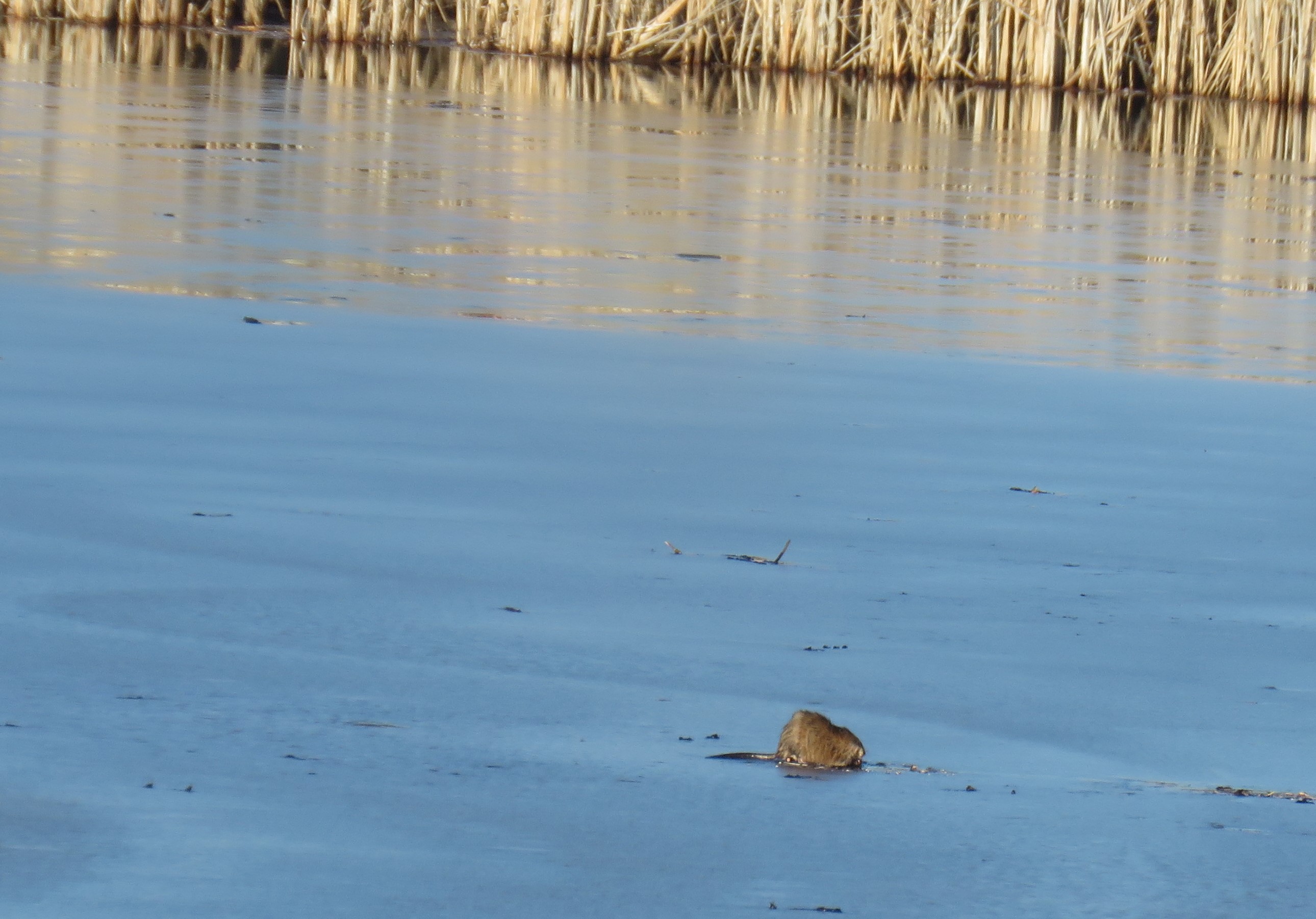 4 thoughts on “A Winter Picnic for Muskrats”