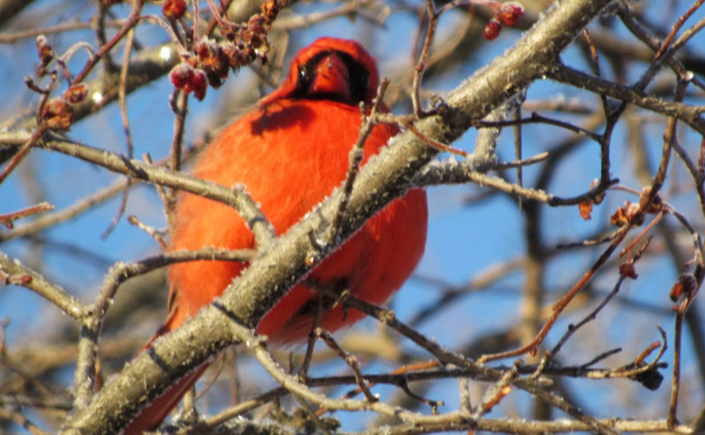 Encounters with the natural world accelerated at local bird feeders during the first week of January as blizzards slammed much of the eastern U.S. and temperatures plunged into single digits in Oakland County. Many of those encounters were with the “redbird,” more properly known as the Northern Cardinal, a permanent year round resident of Oakland County. With their striking red plumage surrounded by a sea of swirling snow, they are in a class of their own for stunning beauty, a fact that has not gone unnoticed. As a matter of fact, cardinals are noticed more easily here in winter than in summer, and in seven states this easy to recognize bird is honored year round. 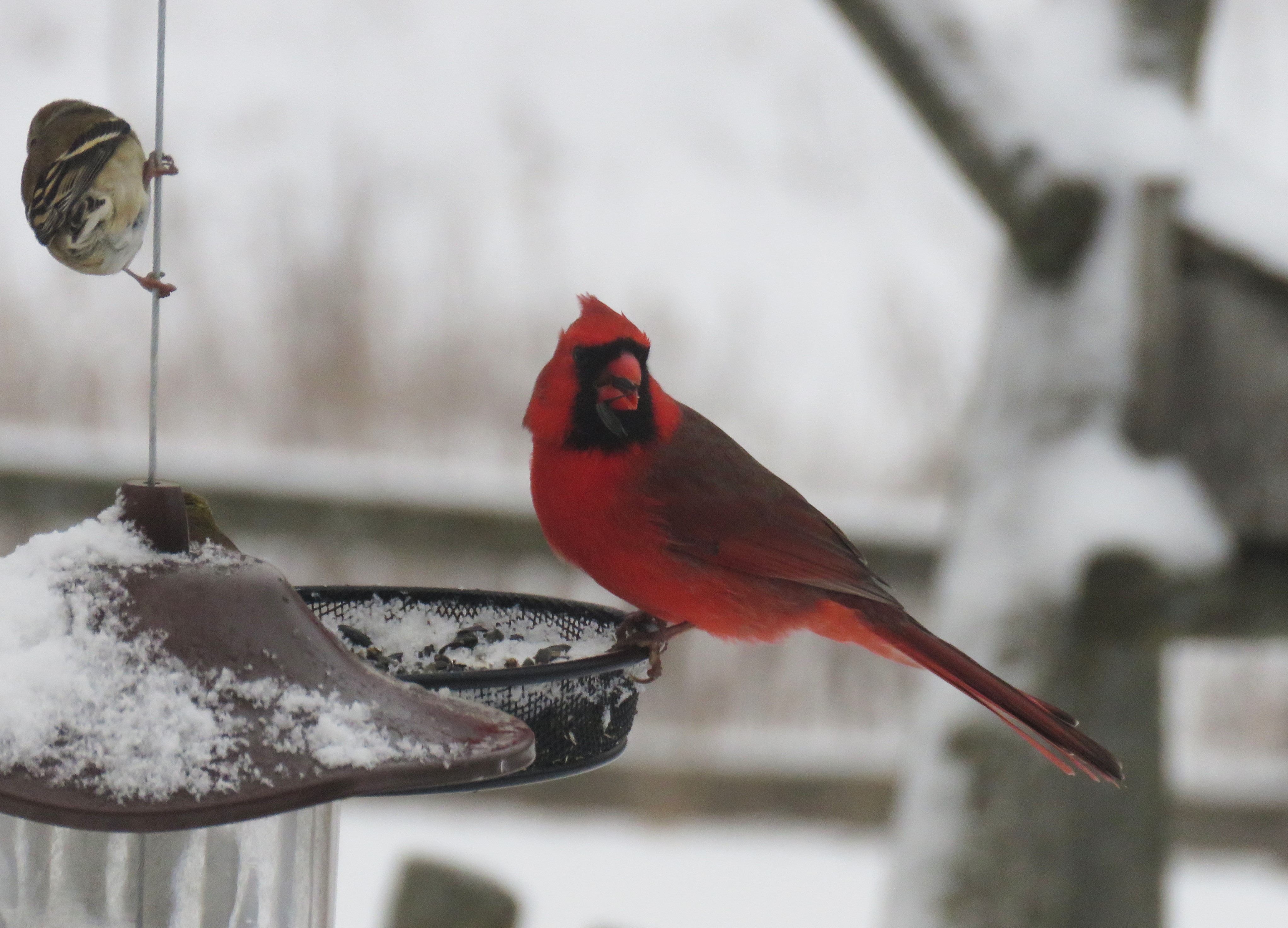 Every state in the United States has an official state bird. The state bird selection is supposedly made based on the bird’s uniqueness or significance to the state. I’m beginning to wonder about that. Illinois, Indiana, Kentucky, North Carolina, Ohio, Virginia and West Virginia all have the Northern Cardinal as their state bird. I’ve got a feeling the choice is really made based on the bird’s popularity, and perhaps the ease to identify, “Hey look! There’s a redbird!” If my theory is correct, perhaps the Northern Cardinal should be crowned as the favorite “winter bird” of Oakland County, for there is no confusing these birds with any other birds that may appear in deep winter. 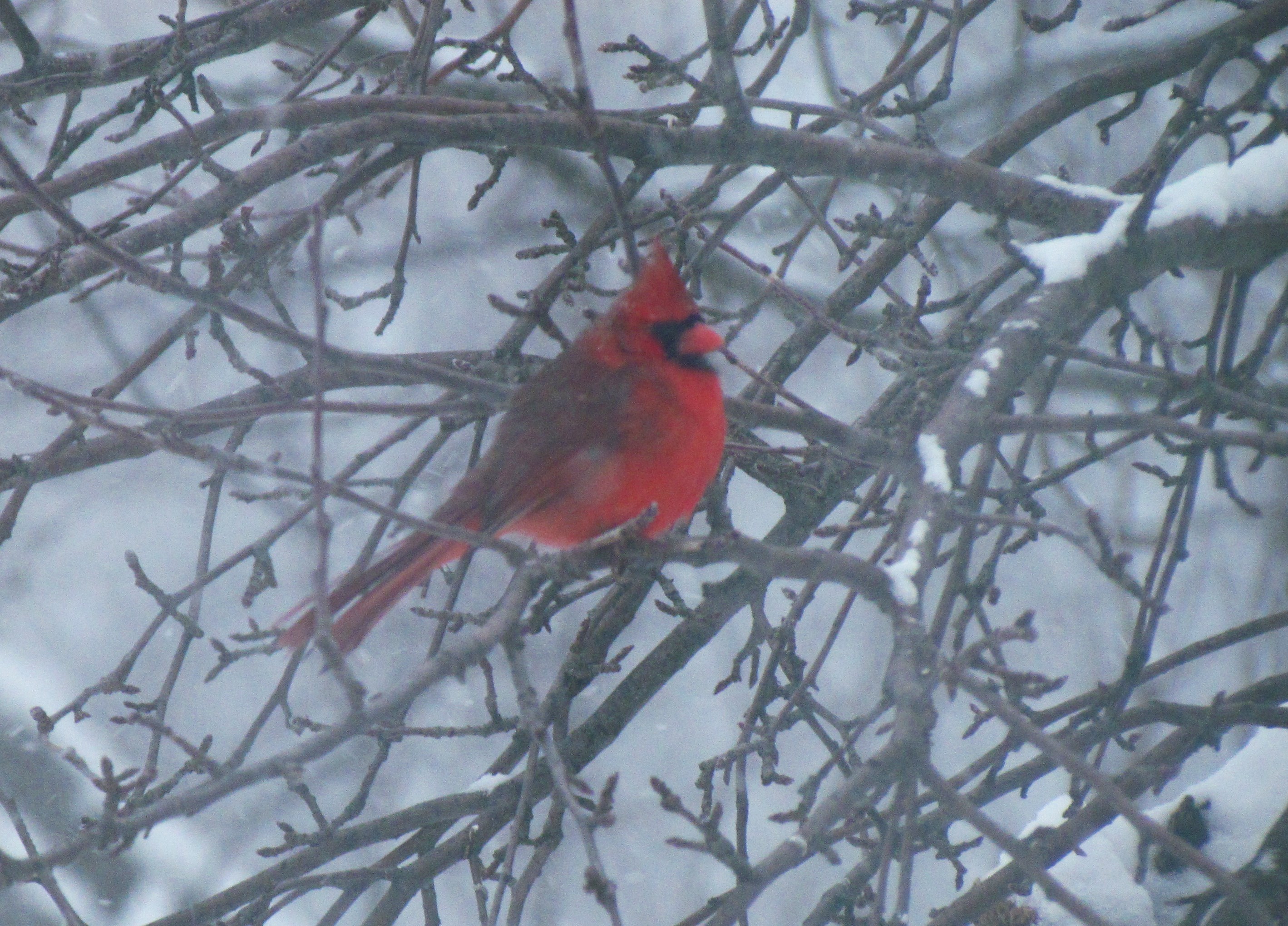 Cardinals do not migrate with the seasons and have traditionally been more common in warmer climates such as the American southeast. If you searched locally for Northern Cardinals at the time of the surrender of Fort Detroit during the War of 1812, you would most likely have failed. Any flashes of red noted in the southern fields of the Territory of Michigan would most likely have been from the cardinal-red jackets of British soldiers that had conquered Detroit and the surrounding region, and not from cardinals. 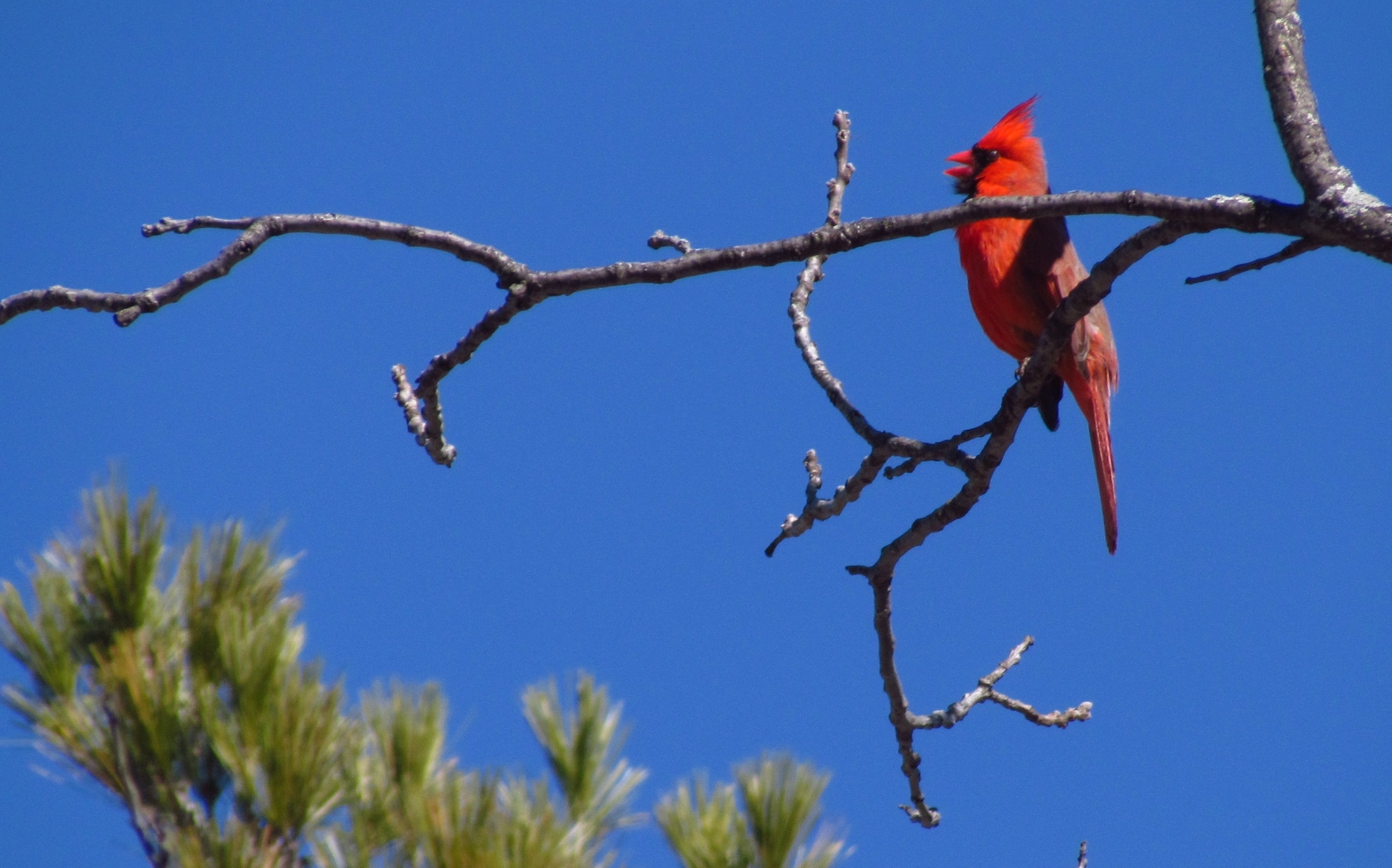 Northern Cardinals were first documented in the southernmost part of our state sometime after the War of 1812, but cardinals never made it into the Upper Peninsula until about 40 years ago. Human altered habitat has become attractive to cardinals. Add the fact there are now more people feeding birds in winter and the perfect storm is set for cardinals expanding northward.

The very name “Cardinal” is also steeped in history, and is related to the Catholic Church. The bright red feathers of the males reminded early European settlers of the red vestments (garments) worn by the cardinals of the Catholic Church. The Northern Cardinal also carries regional nicknames, including the most common one used in Oakland County, “redbird.” According to the Animal Diversity Web of the University of Michigan, they are also known as “common cardinals, cardinal grosbeaks, redbirds, Virginia nightingales, cardinal-birds, cardinal red-birds, Virginia redbirds, crested redbirds and top-knot redbirds.” 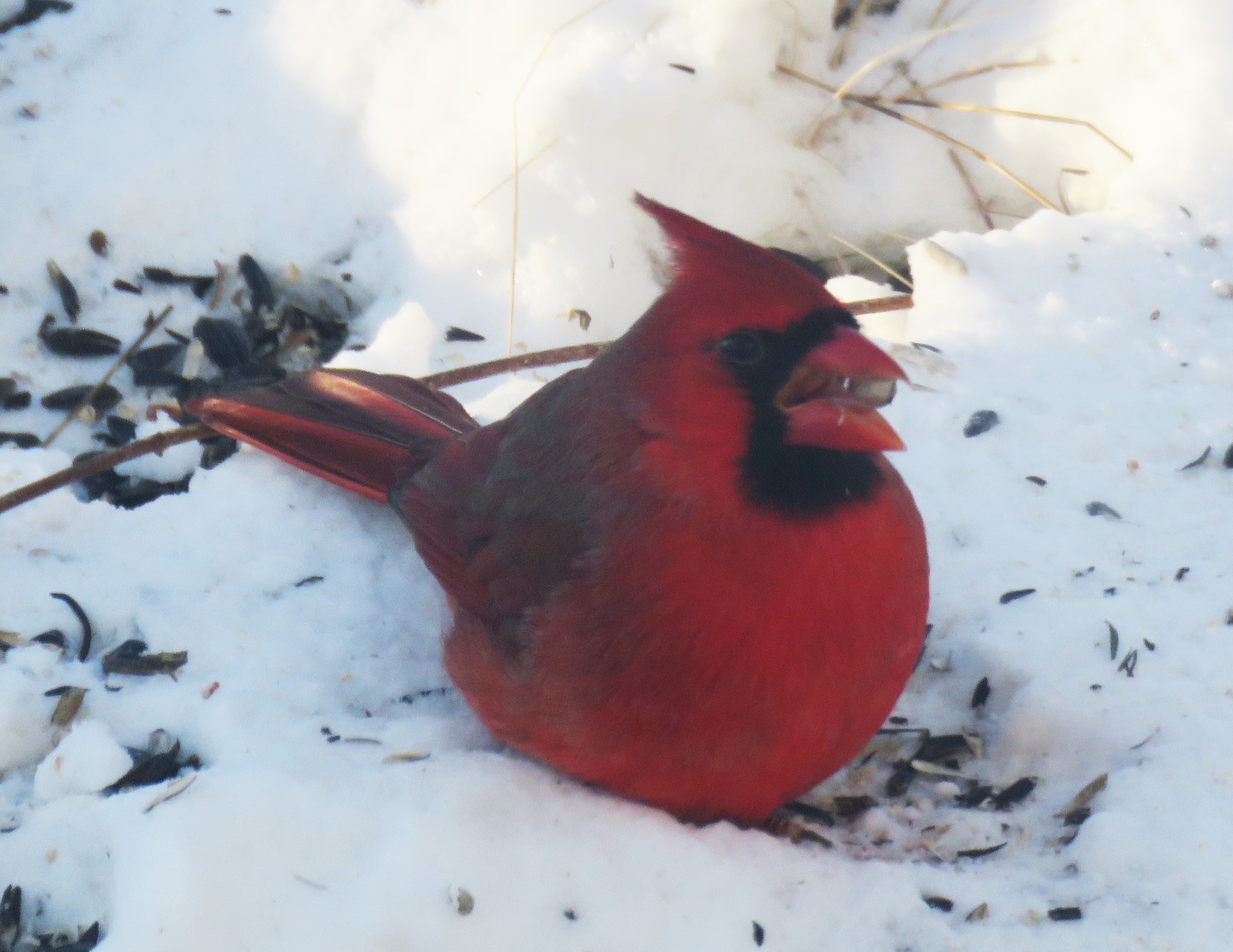 Red was, and red remains the distinguishing characteristic of the male Northern Cardinal. The female is also very attractive, and although not red, even a casual observer recognizes her as a cardinal. Here’s what the Cornell Lab of Ornithology has to say about their colors in winter:

“The male Northern Cardinal is perhaps responsible for getting more people to open up a field guide than any other bird. They’re the perfect combination of familiarity, conspicuousness, and style: a shade of red you can’t take your eyes off. Even the brown females sport a sharp crest and warm red accents. Cardinal don’t migrate and they don’t molt into a dull plumage, so they’re still breathtaking in winter’s snowy backyards.”

Cardinals thrive in areas near shrubbery, managed parkland landscapes and of course our urban and suburban yards. Over the years I have noticed cardinals quickly flock to bird feeders, confirming the common belief of many ornithologists that cardinals benefit from the increasing number of humans that are passionate about bird feeding in winter. Why forage in the wilds of Oakland County, when “all you can eat cafes” can be found in abundance? 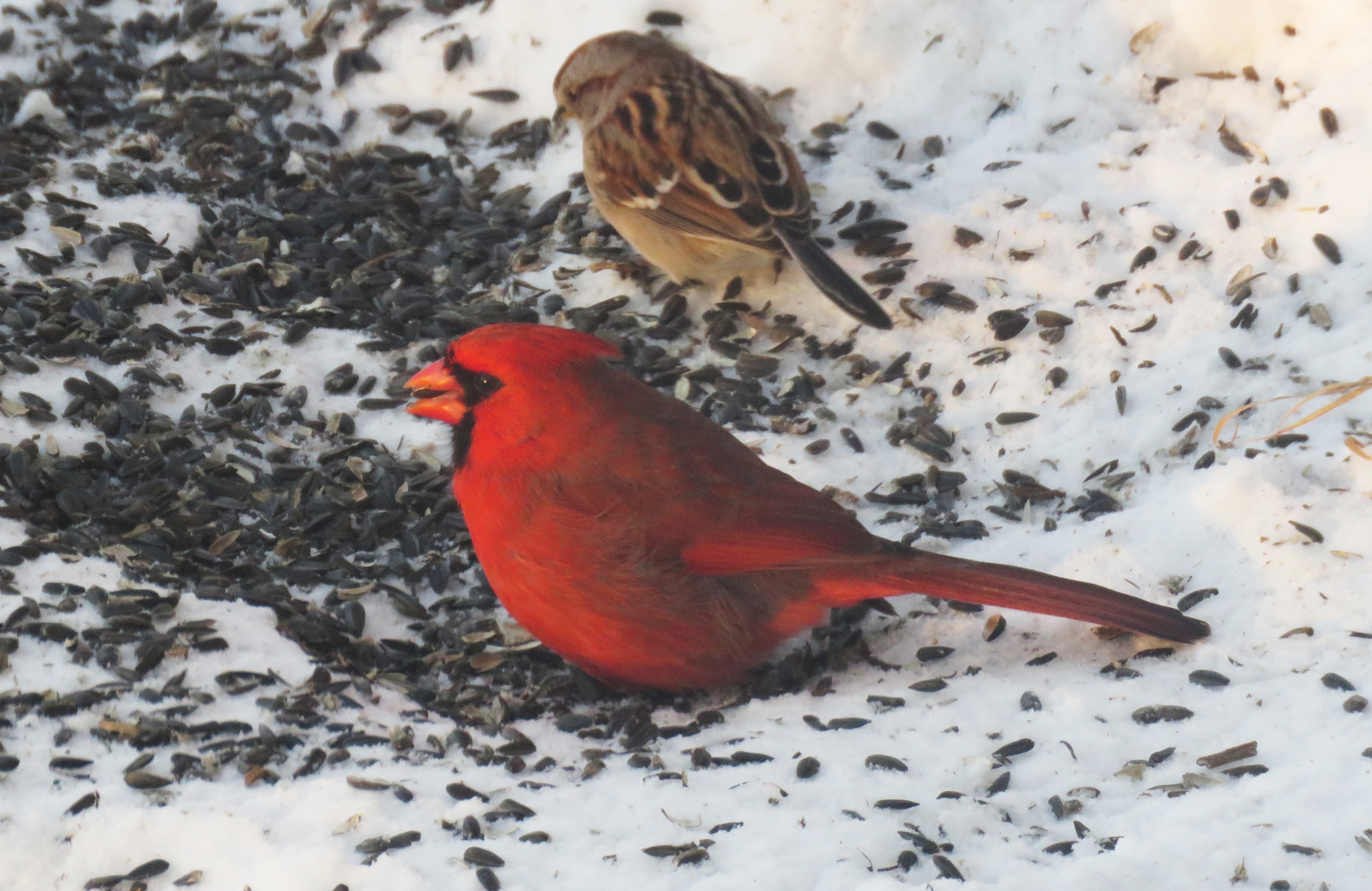 Cardinals are often the first bird to appear at a feeder in the morning and the last to leave in the final hour of daylight. They are omnivores and feast on seeds of all sorts and dried wild berries during winter. Bugs, beetles, and grasshoppers spice up the menu in spring, summer and fall. I have noticed that their favorite commercial bird seed appears to be black-oiled sunflower. Literature confirms my observations that in winter small flocks of cardinals feed together in a peaceful mood, perhaps because their usual strong territorial instincts are lessened in winter. It was a bright sunny day two winters ago in the proverbial ‘dead of winter’ when I photographed a flock of over a dozen cardinals feasting on frozen hawthorn berries in front of the Oakland County Parks office. Another confirmation that a human altered habitat favors the life of the cardinal, especially when there is nearby shrubbery for hiding or nesting. However, during breeding season and throughout the summer, cardinals are isolationists and fiercely defend territory against other cardinals.

Most species of birds defend their territories with vocal song and persistent aggression towards intruders, but because of the overlap of human habitat with cardinal habitat their peculiar battle with “intruders” is often witnessed from inside the house. If another male enters the territory, a territory marked by the repetitive vocal stake out of song, the original territory owner, the defender, swoops towards the intruder. The intruder never backs away and fast and furious physical contact is made with the intruder, sometimes causing the defender to fall to the ground. A few minutes later, after he recovers from the impact, he is back on post and suddenly spots the intruder again in the same place. He charges again, contact is made again, and he may be stunned again. This may continue on and off for an hour until the angle of the sun changes and the intruder suddenly vanishes. Cardinals may be masters of adaptation and habitat exploitation during an Oakland County winter, but come spring they fail to realize the “intruder” they battle is just their own reflection on a window. 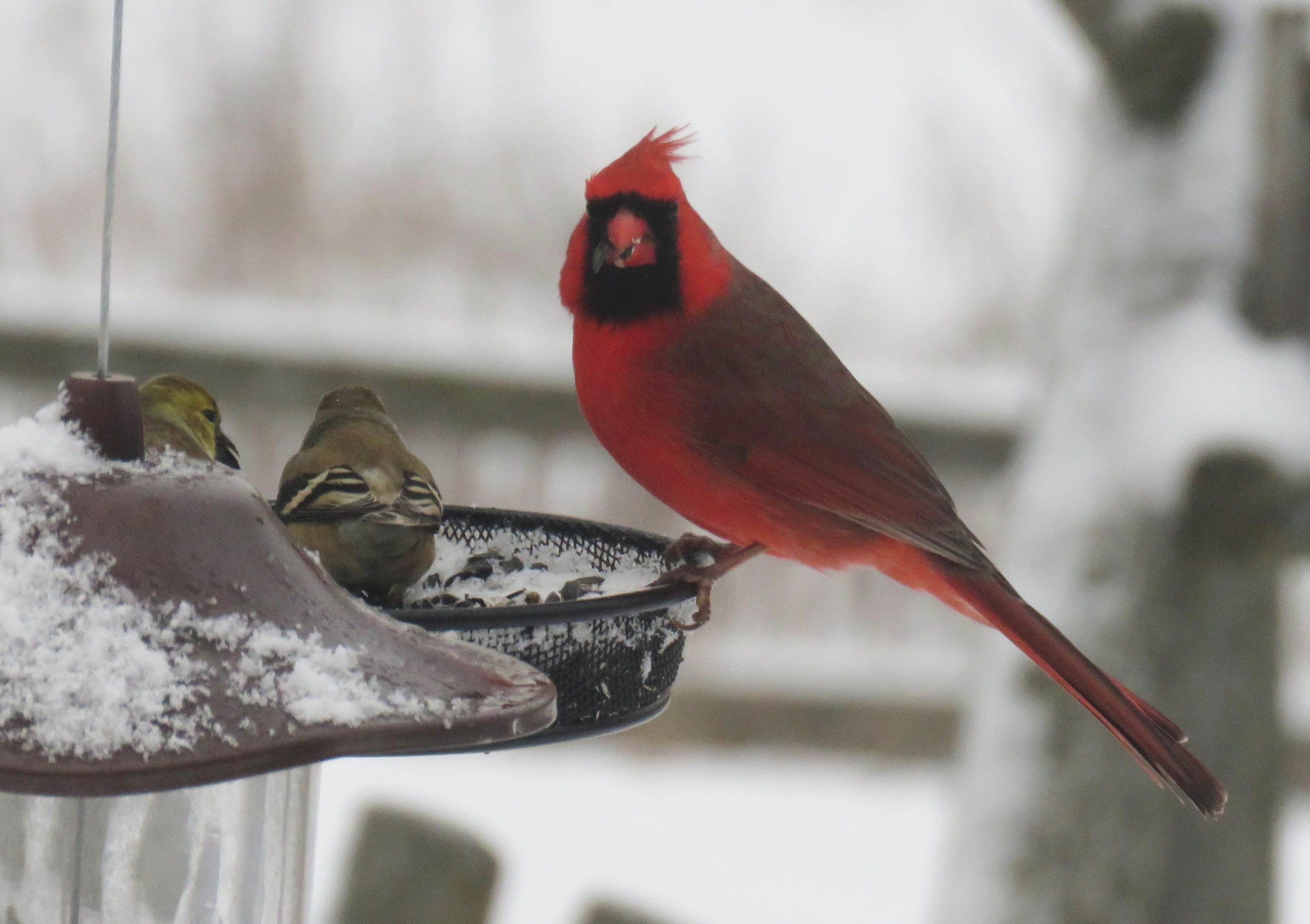