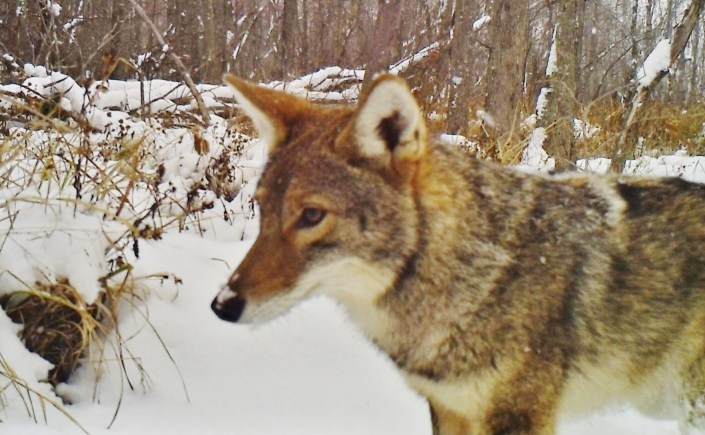 Aldo Leopold wrote: “There are some who can live without wild things, and some who cannot.” I consider myself an unabashed member of the latter group. Coyotes certainly represent “wild things,” but they are not restricted to rural sections of our county. They are extremely adaptable creatures, and it’s perfectly normal for them to be noticed not only in our State Recreation Areas, Oakland County Parks, and Huron-Clinton Metroparks, but also in our suburban and urban areas. Coyotes are found in every city and town in our county, including populous Pontiac, Royal Oak, and Rochester, nor are they strangers to the city of Detroit.

This excellent video of a coyote hunting meadow voles in a roadside field at Detroit’s Rouge Park, as a deer casually watched, was filmed last week and shared with me by my nature friend, Donna Croaker Hall.

Coyotes are watchful, curious, and intelligent creatures. They adapt to our behavior and ways far more quickly than most of us even begin to discover coyotes’ ways and behavioral patterns. Sometimes, their curiosity gets them into trouble, as was the case with this one that slid into a water retention pond about six years ago at Addison Oaks County Park. The coyote was subsequently rescued, without incident or aggression, when a chain link fence was rolled down the slippery surface to offer it an escape route.

Many of us never hear “song dog” music or see lucky visual encounters. Sometimes, a sound disturbance such as police sirens can elicit a howling response. A trail runner friend of mine had such an encounter a few weeks ago, and she graciously shared her story and video capture with me. She was running in the dawn’s early light alongside a well-traveled road adjacent to a field. She heard approaching sirens and jogged to the side. Just as the officer’s patrol car passed by, coyotes started howling, living up to their name as “song dogs.” Listen for them in this clip just after the police car passes.

During coyotes’ breeding season, which is from January to March, their vocalizations usually increase with most of their howls and yips heard around dusk and dawn. However, outbursts of their music, which led to them being referred to as “song dogs,” might be heard in the middle of the night or during the brightest hours of daylight, sometimes in areas shared with humans.

Another video was shared with me by Project Coyote, a national non-profit organization based in Northern California, and shows a coyote trekking across a ski resort, most likely searching for voles under the snow before it pauses to howl. Listen and watch here, and remember their howls are nothing more than communications to round up the family, define territory, attract a mate, or perhaps, just send a greeting stating, “I’m here!”

I’m always pleased to hear coyotes. The New York Almanack from New York State does a superb job of decoding their howls, yips, and barks. Winter is the season I hear coyotes the most and capture most of my images of them on trail cameras, including the ones below and the colorful lead photo from this blog, which was taken at Rose Oaks County Park.

I welcome the presence of coyotes in my wintery woods, but my love affair of encounters with them actually began almost ten years ago while cross-country skiing down Alligator Hill at Sleeping Bear Dunes National Lakeshore after a heavy snowfall. Wind obscured any noise I made. I glided to a stop a few dozen feet from a thicket and partially unzipped my jacket. The squeaky zipper noise was instantly followed by a startled coyote bursting out of the snow-covered woodlands where it was most likely napping. The coyote looked my way and paused just long enough for me to snap a photo before bolting, leaving me smitten by its silent ghost-like appearance and disappearance. When I returned home, I started researching the ways and behaviors of our Eastern Coyotes and have been a loyal fan ever since.

South Manitou Island, a 5,280-acre island in the Manitou Passage of Lake Michigan, is part of Sleeping Bear Dunes National Lakeshore and is a location where I continually discover behavioral patterns of coyotes. Each spring for the past five years, with the exception of this spring, I have served as the Lighthouse Keeper for the island’s historic lighthouse during each of my 40-day “tours of duty.”

I often saw coyote tracks along the shoreline during my daily treks to and from the lighthouse and suspected coyotes directly observed my activity, but remained unseen by me. While on the lighthouse’s catwalk, I occasionally had the pleasure of watching a rather handsome and large coyote walk the shoreline, scrounging for fish that washed ashore after a storm.

My trail camera also captured images of the coyote meandering the lighthouse access trail we both used. We were good neighbors and mutually tolerant.

And then, on an exciting windy day, we directly encountered each other on a trail we shared. We were both momentarily startled and then after a pause of a few seconds, continued on our ways giving one another a respectfully wide berth. The coyote paused to look back just as I did the same, and from that moment on, he was a welcome wild companion.

I climbed the 117 steps to the catwalk of the lighthouse to resume my duties and about ten minutes later, the coyote reappeared on the lighthouse breakwall to harvest Herring Gull eggs.

Coyotes are opportunistic omnivores, and their diet is extremely varied and includes fallen fruits, berries, frogs, large insects, woodchucks, mice, rabbits, feral and free-roaming cats, roadkill, and eggs of all sorts. One of my most unexpected trail camera video captures occurred when I set a motion-activated camera near an area where snapping turtles lay eggs in hopes of filming one. I was stunned when I reviewed the camera’s images. One video clip showed a coyote warily approaching a very large snapper laying her eggs before it wisely wandered a few yards away to dig up unguarded eggs.

Now that we have had our first ground-covering snow, coyotes are transitioning to their winter favorites of rabbits, meadow voles, and mice. As winter takes hold, it’s not at all unusual to find coyote tracks around a dead deer, but full-grown deer are rarely targeted by coyotes. However, deer injured by a car or a hunter become easy prey.

Coyotes often visit bird feeders, but when they do, they are not looking for seeds, but rather hunting for small mammals that scrounge for seeds after dark. Before ice becomes solid, a muskrat that wanders too close to the shoreline may become a meal. Coyotes are always aware of their surroundings and will sometimes even stalk late departing Sandhill Cranes. Come spring, they will revert back to fruits, berries, insects, and Wild Turkeys, a ground-nesting species with nests full of large eggs.

Tracks in snow are like the open pages of an exciting book. I often find coyote tracks on top of snow-covered beaver lodges. The beavers within are safe, but the top of the lodge makes a perfect perch for coyotes to watch the frozen landscape for opportunities. Tracks have stories to share, from a straight line trek across the ice to meandering tracks in meadows where coyotes stop to sniff, listen, and pounce in the snow. The sniff, listen, and pounce behavior is a classic move to capture hidden mice and meadow voles, major dietary items in the winter months, along with the occasional rabbit.

As any good nature detective knows, their scat shares secrets of their diet, and it’s often deposited on well-trodden trails. This colorful summer image of coyote scat being feasted upon by butterflies and insects for mineral nutrients is from South Manitou Island. Strawberry seeds are obvious and confirm summer berry eating. The twisted scat on snow with bits of fur is from here in Oakland County, near the site of a road-killed deer.

Coyotes are very much a part of our environment. Keeping coyotes wild and wary is the key to coexistence and can be accomplished by hazing. Hazing, or aversive conditioning, is the process of disturbing a coyote’s sense of security to such an extent that it decides to stay away. Yelling at a coyote, blowing a whistle, jumping up and down, or waving a broom about will quickly drive a coyote away from the yard. For detailed, factual information on coexisting with coyotes and hazing tips, I suggest visiting the websites of Project Coyote and Coyote Watch Canada.

It’s also important to never intentionally or accidentally provide food sources for coyotes. For when a coyote becomes accustomed to any easy food source, problems may arise. Be sure to secure your food and trash, and keep our “song dogs” wild and free as winter winds howl, for that is nature’s way.