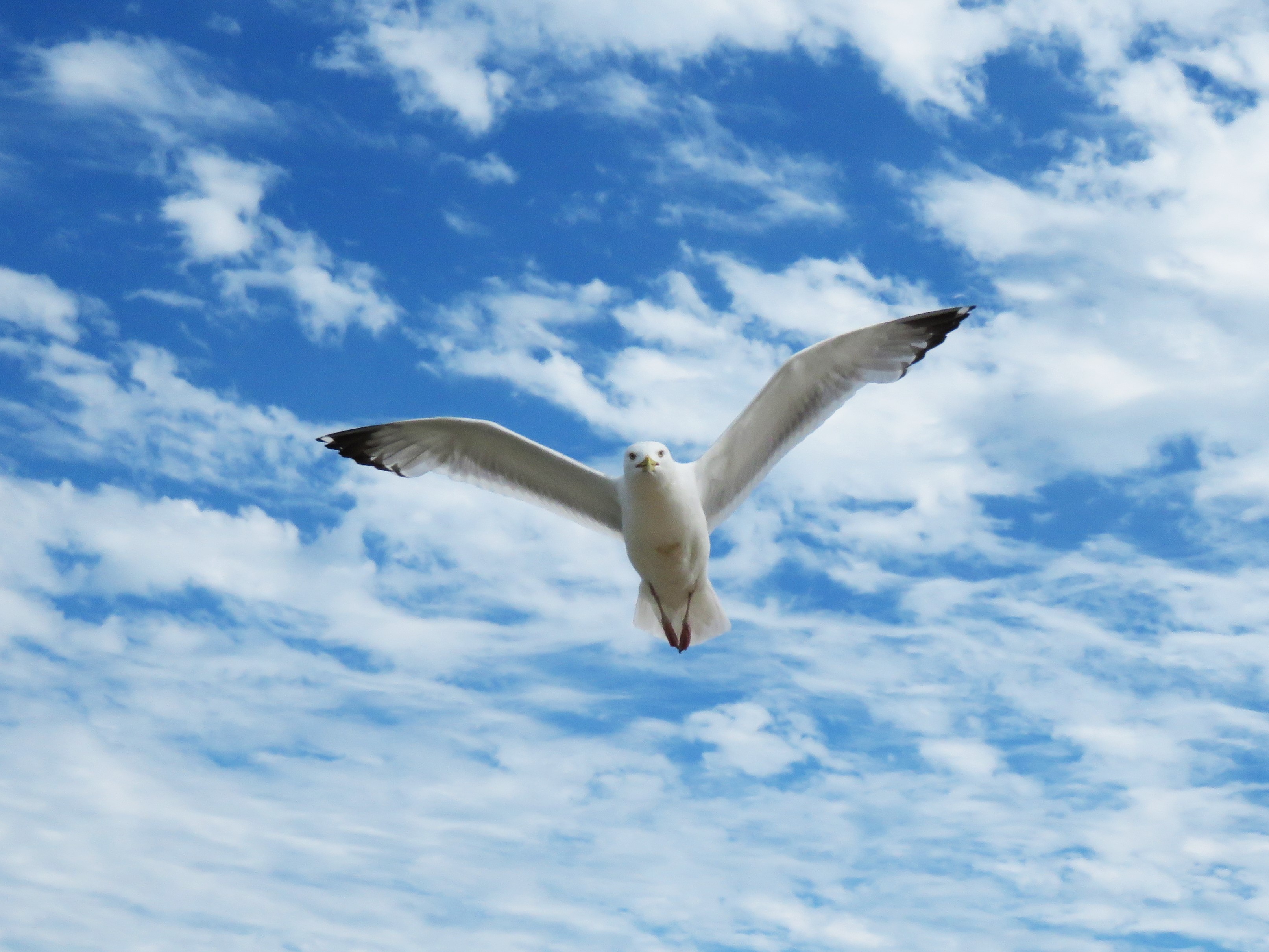 Oakland County has no seagulls. Not even one. So just what are those raucous birds that fly around boats, docks, beaches and picnic areas on Memorial Day Weekend? They are not seagulls. Seagulls do not exist. 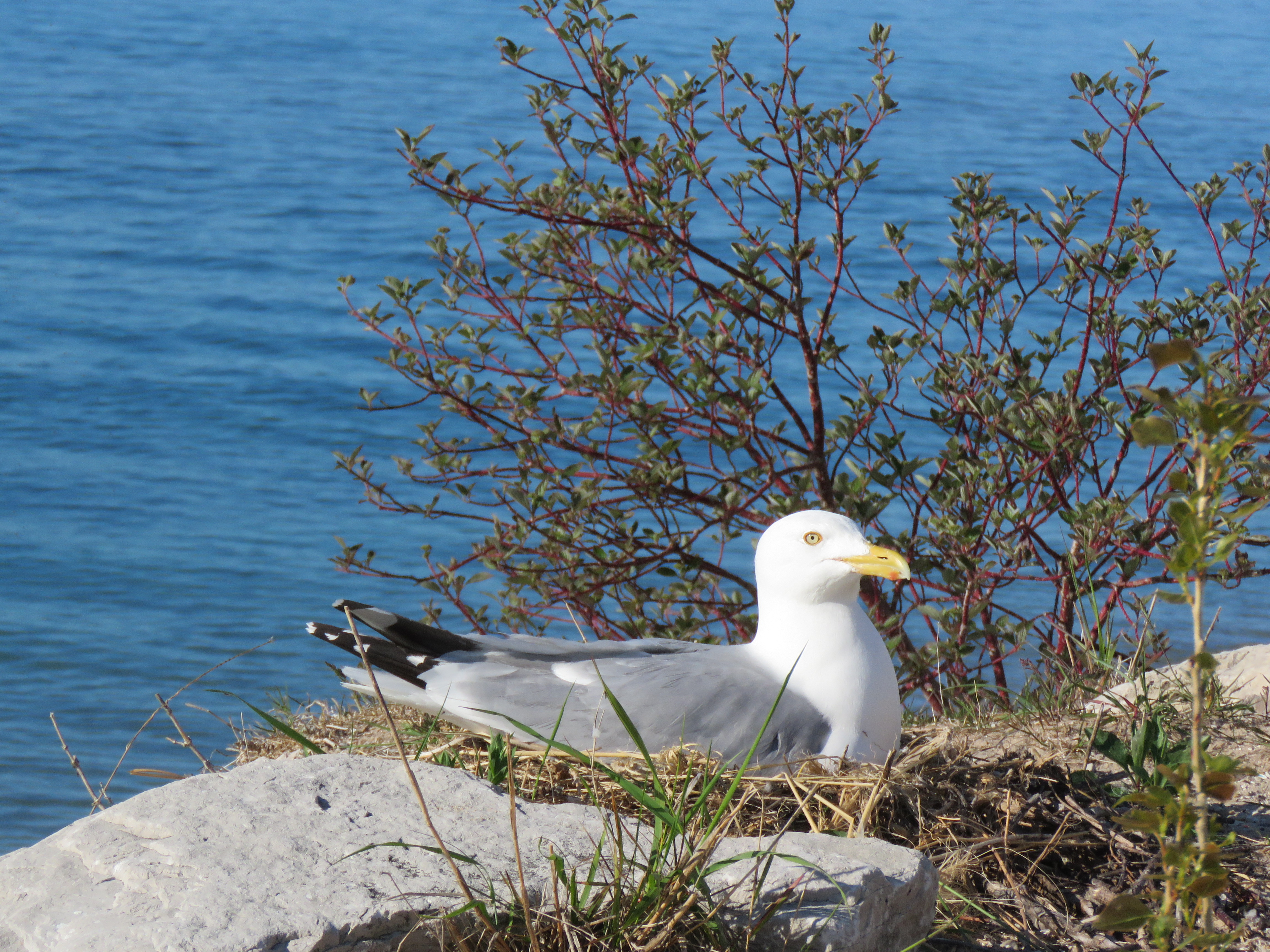 There is no such thing as a seagull. The word “Seagull” however, is an acceptable layperson’s term to describe all species of gulls whether they are soaring over ocean shoreline, following fishing boats on the Great Lakes, or just “hanging out” near picnickers at Stony Creek or Kensington Metropark, or any large park or lake in our county. My use of the word seagull today refers exclusively to our quintessential seagull, the often maligned Herring Gull (Larus argentatus). The Herring Gull is a beautiful bird, but unless it stays motionless, the beauty of this gull is often overlooked. 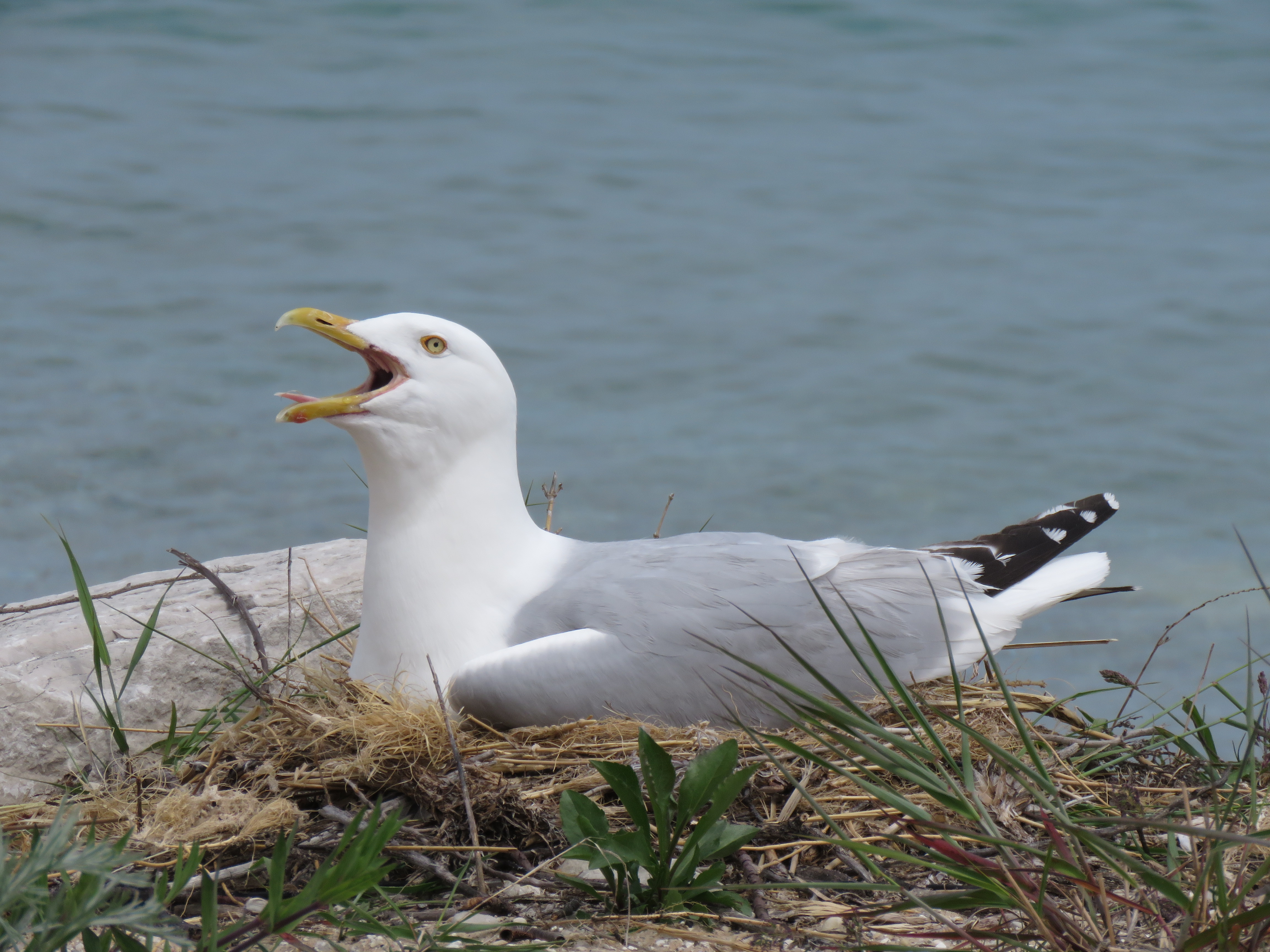 The Audubon Society describes Herring Gulls using three words: big, lively and successful. Their website shares ornithology facts related to climate change. “With the right combination of garbage dumps, shopping malls, and coastlines, Herring Gulls may have a better chance at weathering climate change than other species.” Individual Herring Gulls may also witness and adapt to significant changes in their lifetime as winters weaken and summers sizzle. Herring Gulls are long-lived. According to the Audubon Society, “The oldest recorded Herring Gull was at least 29 years, 3 months old when it was seen in the wild in Michigan in 2015 and identified by its band. It had been banded in Wisconsin in 1986.” 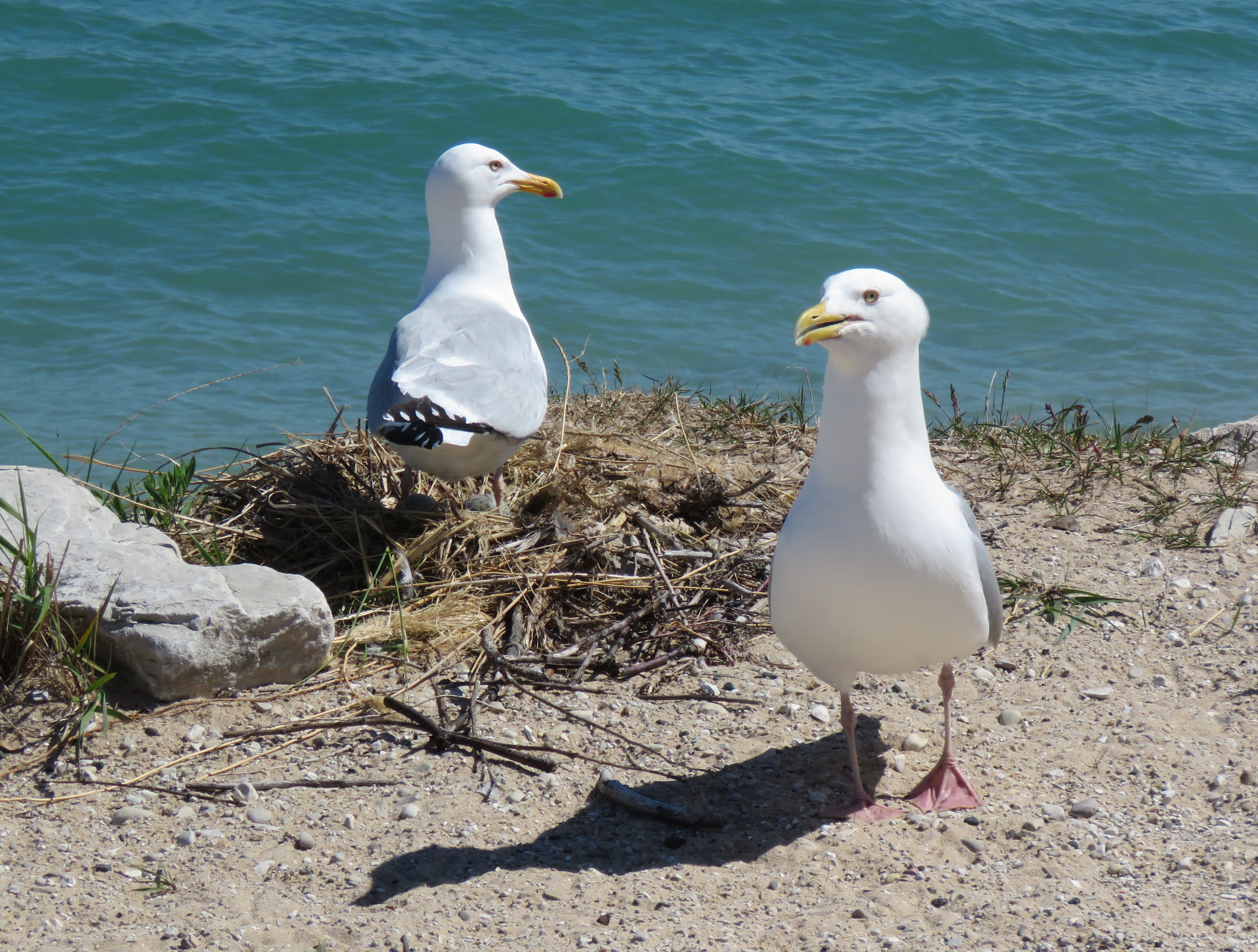 Herring Gulls’ love of herrings (alewives) led to their name, but these opportunist hunters and scavengers adapt quickly to whatever nature or humans offers. The loose soil of plowed spring fields in rural parts of northern Oakland County offers worms and other tiny creatures. Shopping mall parking lots and popular beaches are good hunting grounds for human associated foods. The holiday weekend brings large family picnics and social gatherings to many of our parks. Herring Gulls will also attend. Herring Gulls will be seen all summer soaring over landfills, perched on flat-roofed urban buildings and boat house roofs. They are masters of soaring above water when it’s time to hunt on the wilder side of Oakland County. When a small fish is spotted, they plunge-dive from near the surface and usually capture their prey. Some Herring Gulls are more proactive in their fishing technique. They fish with bait. According to the Cornell Lab of Ornithology in describing the behavior of a gull under observation, “The gull floated bits of bread on the surface of a pond and attracted goldfish feeding on the bread. It ate none of the bread itself, indicating deliberate tool use.” 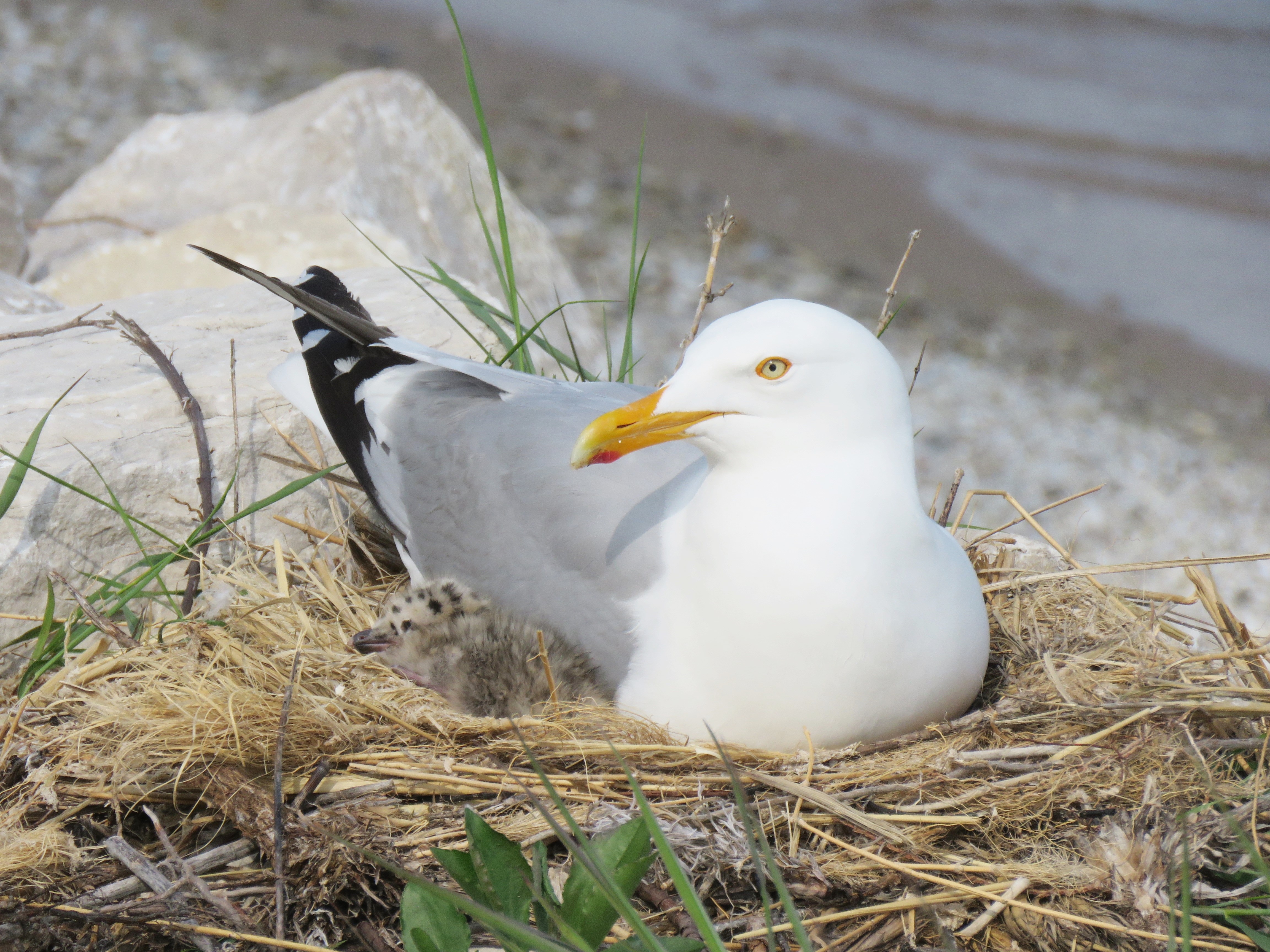 Herring Gulls may not draw much attention from us except for their vocalizations, for they are just “seagulls,” but they are perhaps the most familiar and most recognizable seabird in the Northern Hemisphere. Many are year round residents of Oakland County. With a bit of practice, it’s easy to tell Herring Gulls from other gull species. 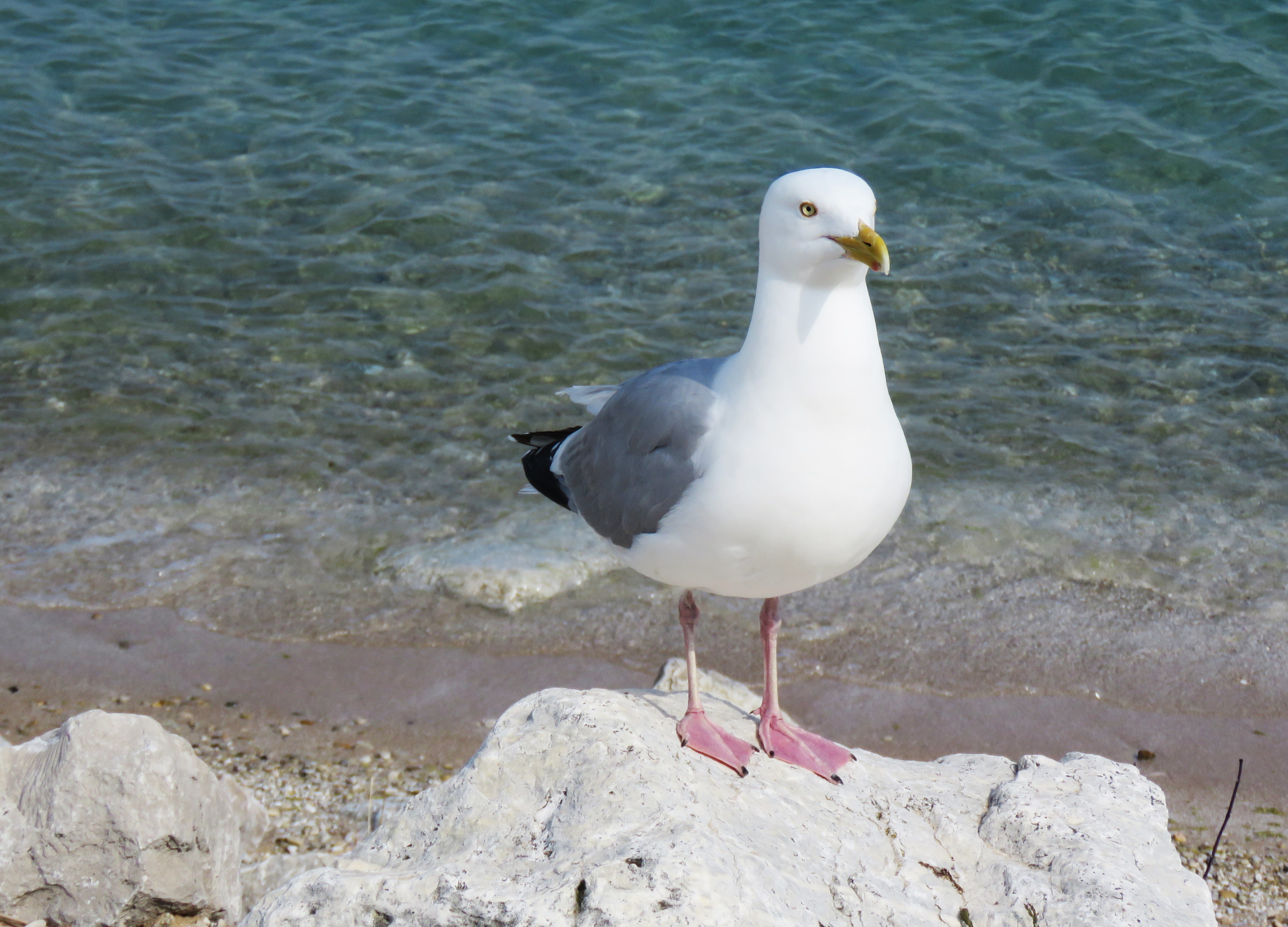 Adult Herring Gulls are gray and white with pinkish legs and yellow eyes. The hefty beak is yellow with a red spot on the lower mandible. Herring Gulls starred in Alfred Hitchcock’s 1960s thriller, “The Birds.” In reality they usually flee human intrusion but swoop at four-legged or two-legged territorial invaders during nesting season. Nesting season is now, and that may mean conflicts with increased human activity at the water’s edge. 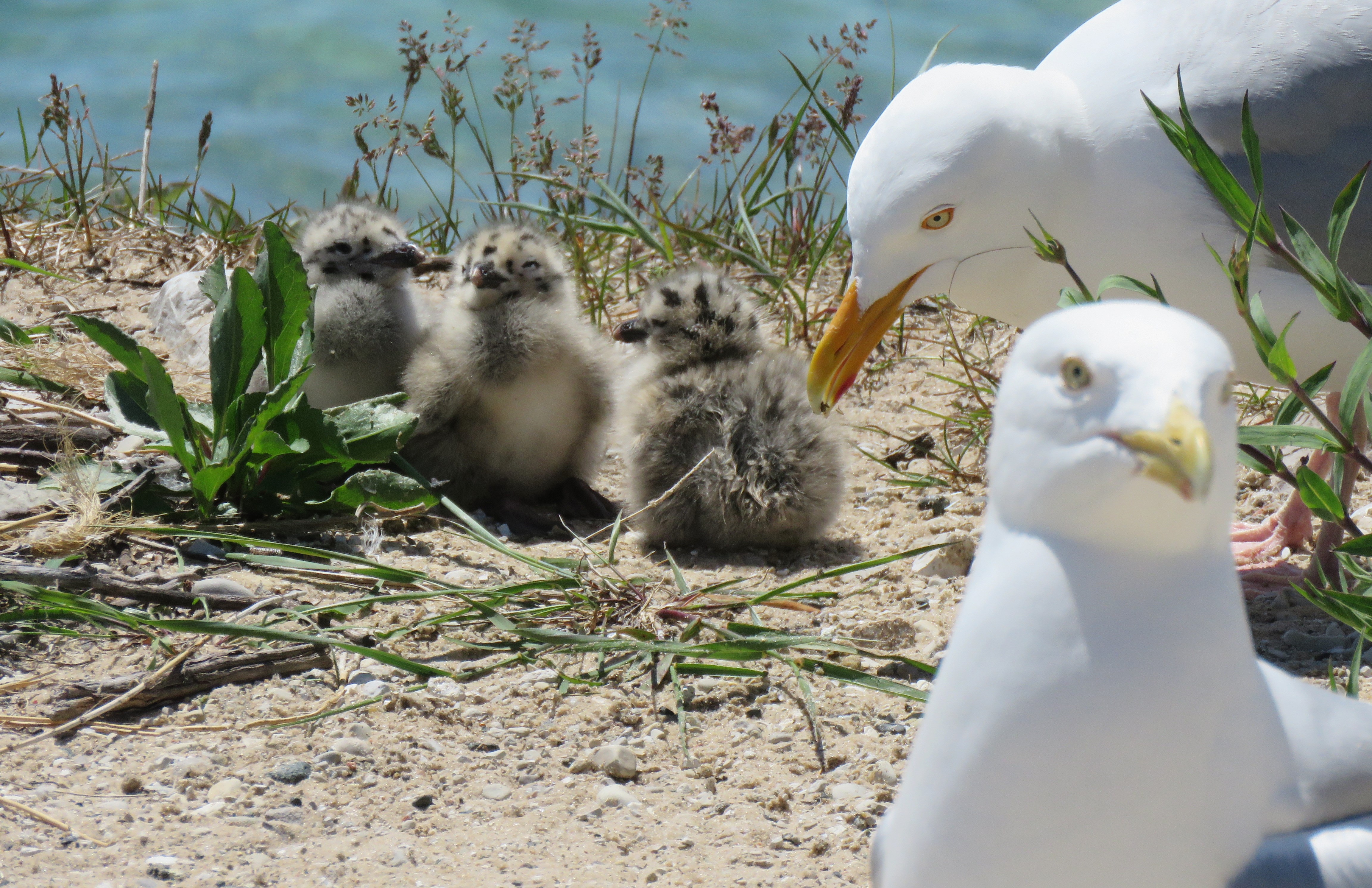 Herring Gulls select nesting sites very near water, often in locations protected from prevailing winds by boulders, driftwood, boathouses and downed trees. Sometimes they nest in colonies, but often a pair seeks isolation. Crevices between rocks overlooking water are another favored spot, and perhaps keep them out of sight from predators. The mated pair creates a shallow depression to the depth of the eggs, and lines the incubation site with materials that may include dried leaves, feathers, dried vegetation, scraps of tissue or cloth and whatever else nature or human behavior offers. Three eggs seem to be the norm, with incubation lasting just about a month. The eggs are an olive-like color blotched with black and brown, colors shared by the down of the newly hatched chicks. Incubation is carried out by both sexes, as is food gathering for the chicks. 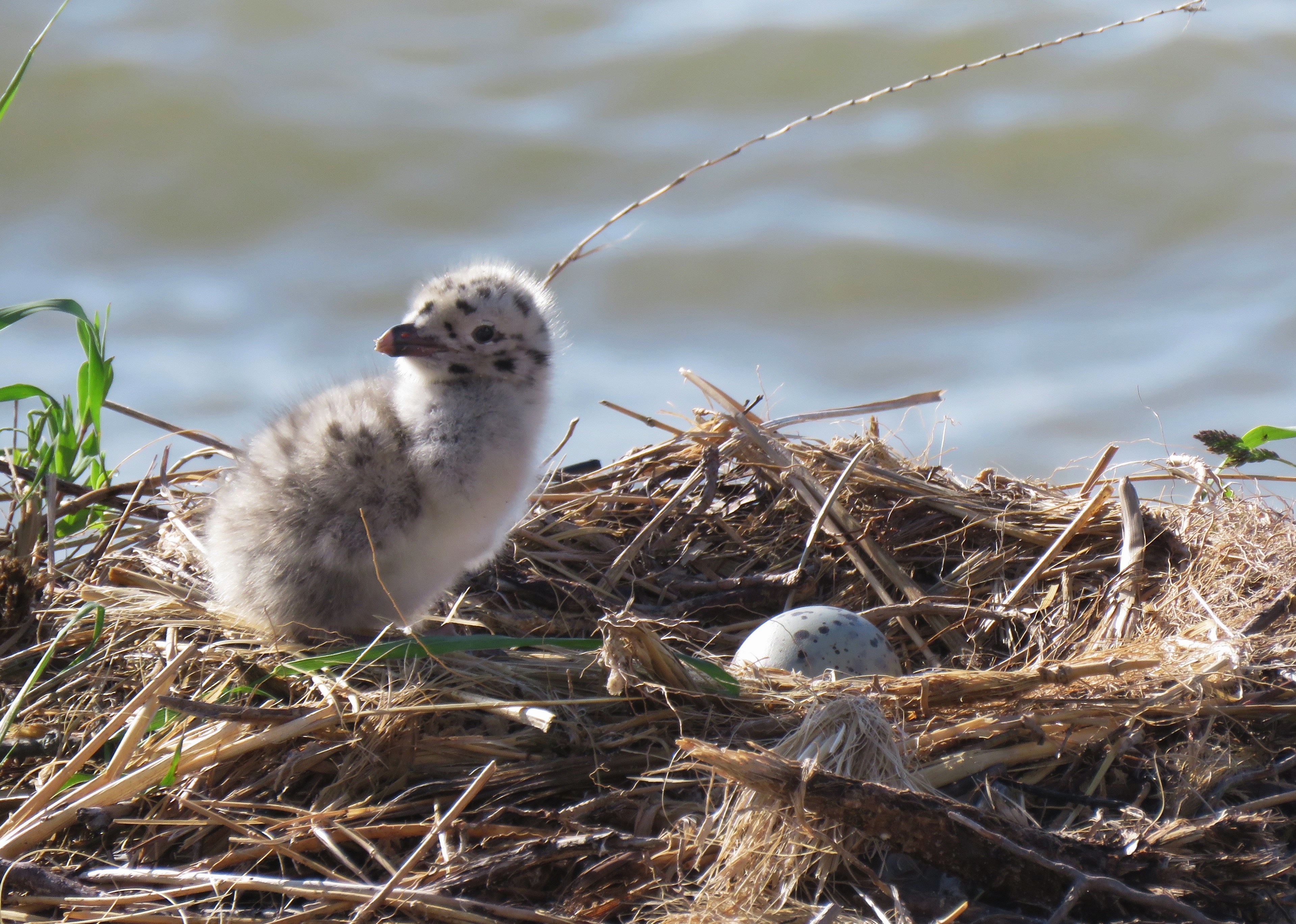 Most people never have a chance to witness the entire process from egg laying, to chicks emerging, and then taking their first meal and first swim. I did. That’s the secret behind the photos in the blog, for it’s next to impossible to sneak up on nesting herring gull. I did not have to sneak up.

One year ago this week I arrived on South Manitou Island as the Lighthouse Keeper for Sleeping Bear Dunes National Lakeshore. It was there within the afternoon shadow of the 1871 lighthouse, that I experienced the strong territorial/aggressive-defensive behavior of a pair of nesting Herring Gulls. On day one of my memorable adventure as a volunteer with the National Park Service, one of the gulls circled above me, shrieking a warning loudly, and then dive-bombed me. I got the message and altered my daily route to the lighthouse. Two weeks passed and the gulls no longer alarmed at my approach. By the third week, their closely guarded eggs were hatching and the adults let me sit twenty-feet away and witness feeding of the chicks. The chicks, which hatched one day apart from each other, never wandered more than few feet from the nest for their first few days of life. All three saw me from day one of their lives and remained unconcerned by my presence. When hikers approached however, their behavior was very different.

The adult gulls caught and swallowed small fish and regurgitated their catch back at the nest. They chicks quickly mastered the art of swallowing – after a bit of parental prodding. I felt like a proud stepdad the last evening on the island and slowly walked towards the pair with their three chicks and knelt to say goodbye to my “seagulls “of South Manitou Island. They accepted my presence. I was family. And they were no longer seagulls to me. They were Herring Gulls, one of the many species of gulls found across the world, a species very much at home in Oakland County. 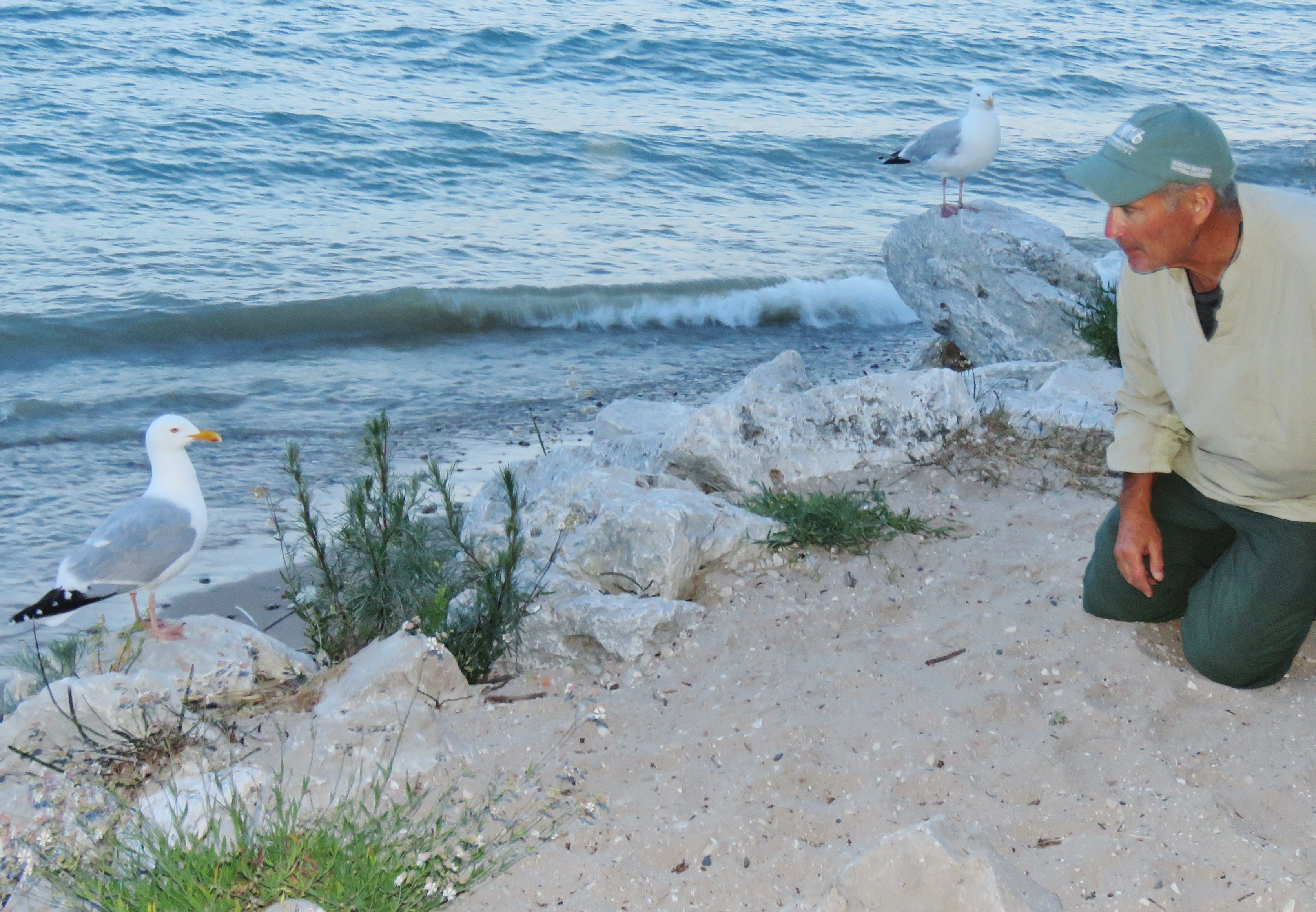 On this Memorial Day weekend, whether your adventure is a barbecue at a busy beach, or a walk of solitude around the shore of a lake on the Wilder Side of Oakland County, keep an eye out for the Herring Gulls. Just don’t go back home and report you saw a seagull.

One thought on “Oakland County’s Quintessential “Seagull”: The Herring Gull”