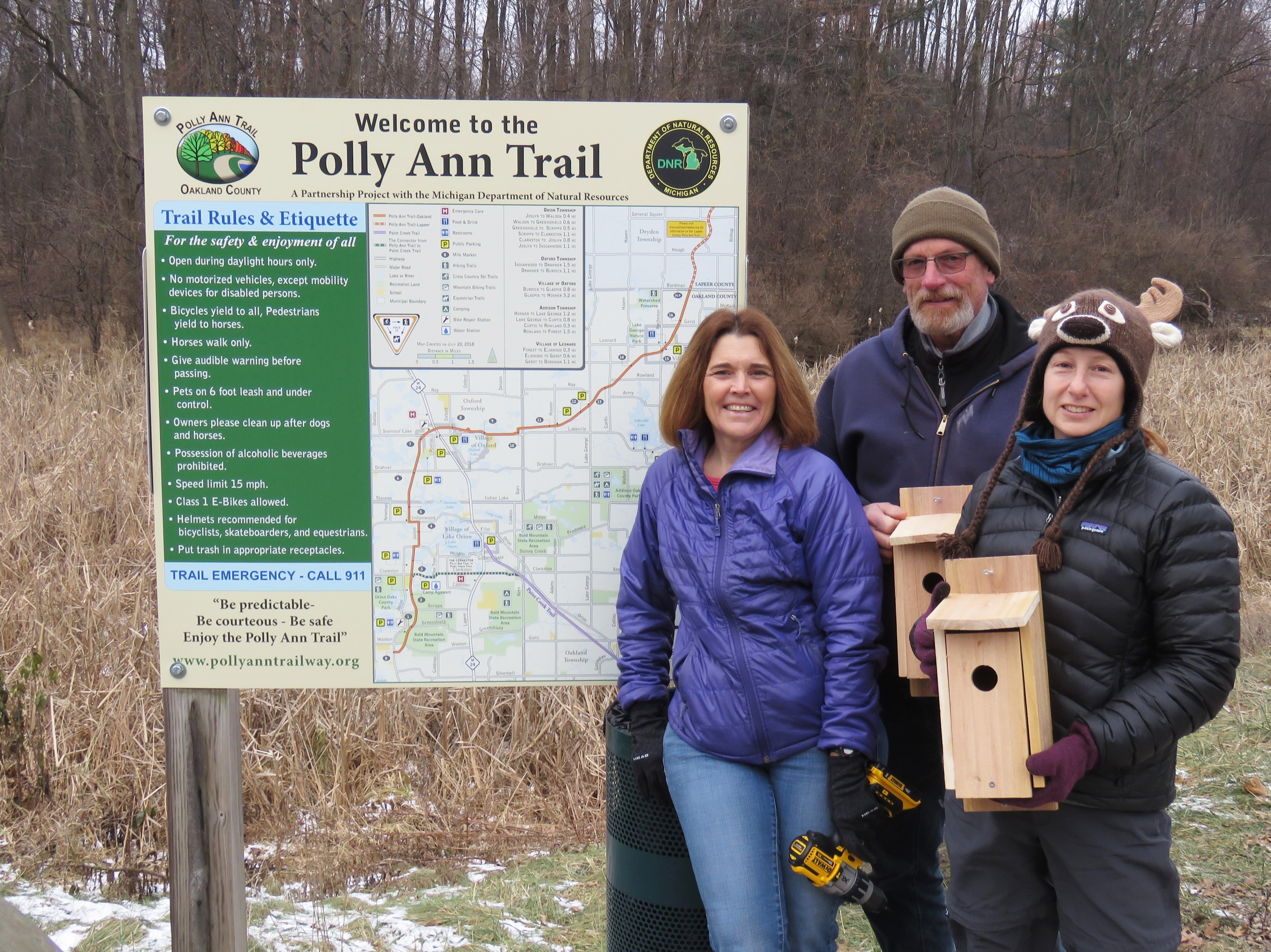 Henry David Thoreau’s writings include a sentence that is often quoted by naturalists and outdoor writers. “The bluebird carries the sky on his back” is one of my favorite Thoreau quotes. A well placed trailside bluebird box is one of easiest and most rewarding ways to do something good for the environment and it adds increased visual enjoyment for trail users – thoughts that gave wings to this week’s blog for the birds: the Eastern Bluebirds that live in our midst along the Polly Ann Trail. 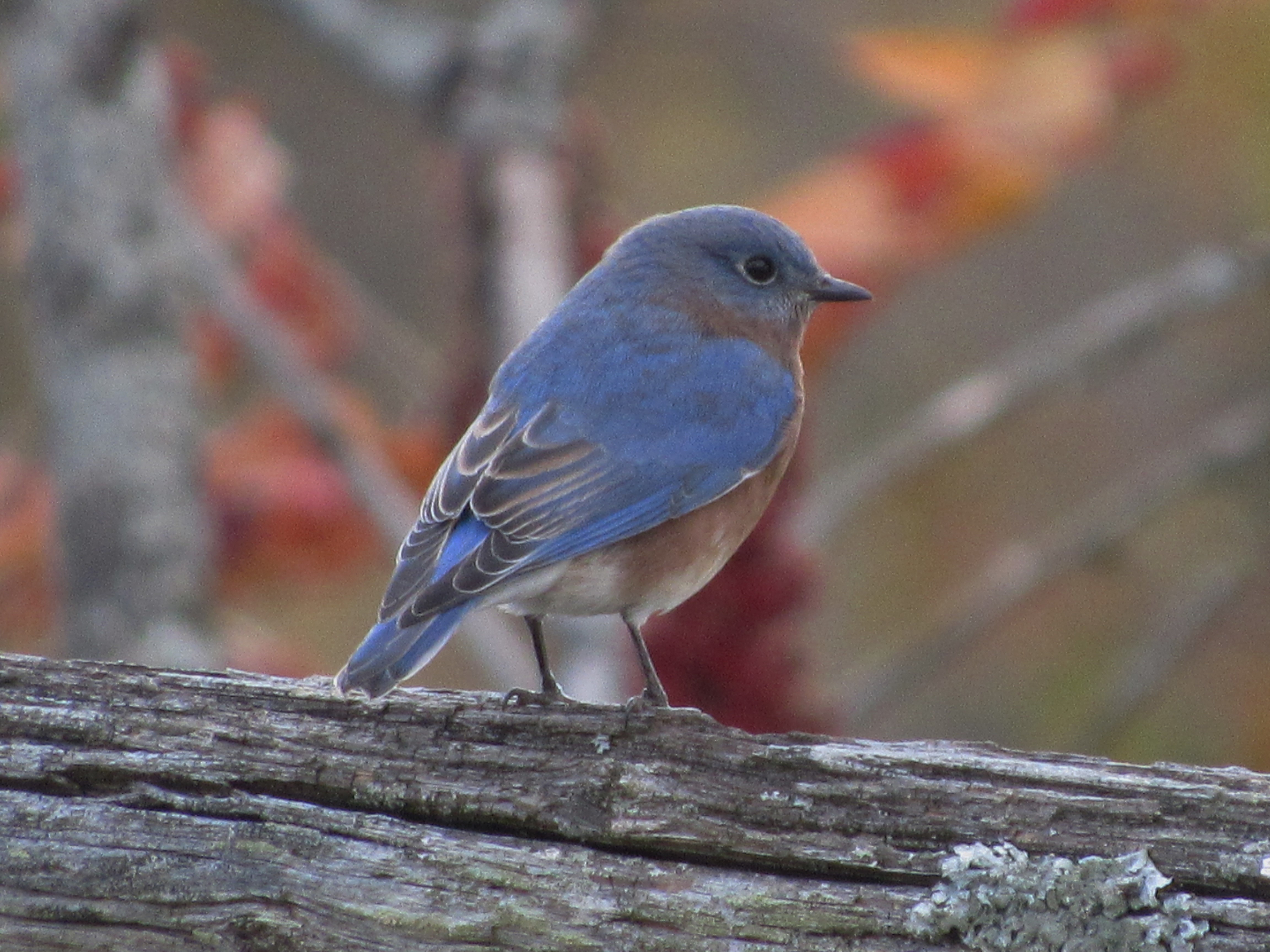 The Polly Ann Trail follows the abandoned corridor of the Pontiac, Oxford and Northern Railroad and is part of our growing network of trails and greenways in Southeastern Michigan that promotes physical activity while connecting people with places.

The 14.2-mile Oakland County section, now owned by the Michigan Department of Natural Resources and managed by the Polly Ann Trail Management Council, runs to the northeast through Orion Township, Oxford Township, the Village of Oxford, Addison Township, and the Village of Leonard before crossing the county line into Lapeer County at Bordman Road. There it connects with the Polly Ann Trail-Lapeer County and meanders northwards for another 20 miles. The Oakland County section of the Polly Ann is mostly crushed aggregate, however, in the more densely populated areas it’s an asphalt surface. The Lapeer County mileage is far more primitive, mostly undeveloped and provides an ideal setting for mountain biking and horseback riding.

As trail signage at crossroads in Oakland County improved, an increasing number of trail users have “discovered” the “Polly Ann,” as the trail is often affectionately called. Autumn is a spectacular time to hike and bike the Polly Ann, especially where it embraces the woodlands and wetlands along the southern section of Bald Mountain State Recreation Area. However winter’s approach will not stop hardy hikers or trail runners from pursuing their passions. Once snow is a few inches deep, the trail lures cross-country skiers, and when the snow is deep enough, others strap on snowshoes to trudge the trail in blissful solitude. 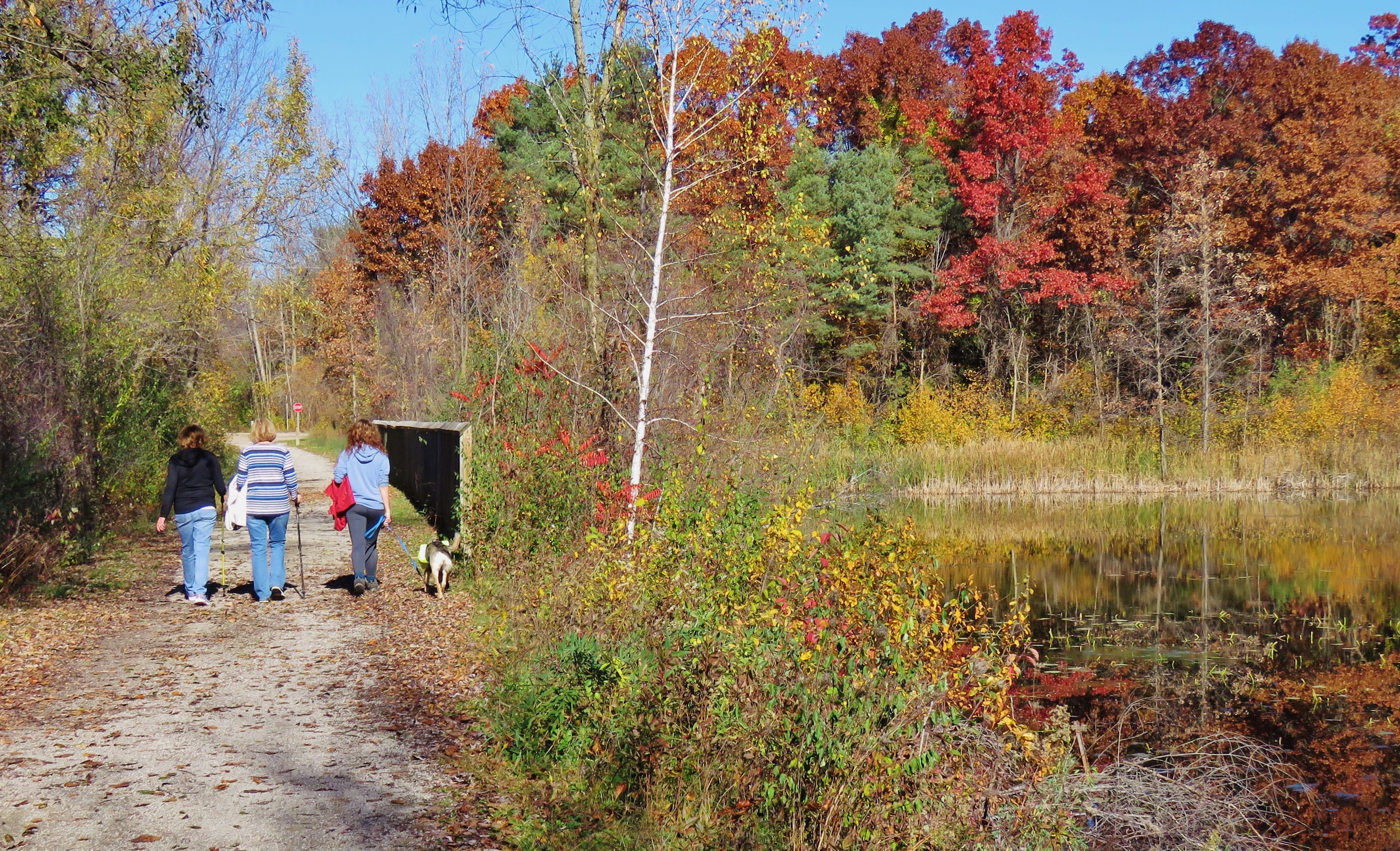 One of my greatest pleasures after the landscape becomes a winter wonderland is reading trailside “stories” in the snow based on the tracks of deer, coyotes, wild turkeys and at times, the wing prints of owls or hawks that swooped down to grab a rabbit or squirrel. The trail corridor also provides great habitat for bluebirds, and that’s where this nature tale on the Polly Ann Trail really takes off.

A bit of clarification may be in order here, for although all of our bluebirds are blue, not all blue birds are bluebirds. Here’s my explanation: Folks new to nature’s way and the world of birds sometimes refer to our rather boisterous Blue Jays as blue birds. Blue Jays are birds that are blue, but they are not Eastern Bluebirds. Both species, however, are very much at home in Oakland County and many of them overwinter in the shrubs and thickets found along the Polly Ann.

Although Eastern Bluebirds are correctly known as voracious insect eaters, they are an omnivorous member of the thrush family and the winter wildlands of Oakland County present a cornucopia of dried berries and fruits, including dogwood, sumac, multiflora rose, holly and juniper berries. Eastern Bluebirds will also visit bird feeders that hold suet and a half-dozen of these beauties are rather regular diners at my feeders.

A few weeks ago, Linda Moran, manager of the Oakland County section of the Polly Ann Trail, informed me that her husband had built 14 bluebird boxes for the trail and were looking for installation help. “Count me in!” was my quick response, and with the further enticement of coffee and the totally delectable meat and cheese “bagel bombs” at trail friendly Evergreens Coffee and Bakeshop, our designated meeting place in the Village of Oxford, I assured her I would be there. Volunteers Paula and Rick, manager Moran and I met at that café the next week; after a breakfast planning session, we headed for the trail. We did not have to go far to reach the trail. The trail corridor passes within about 100 feet of the table where we sat, making the café very popular with trail users. 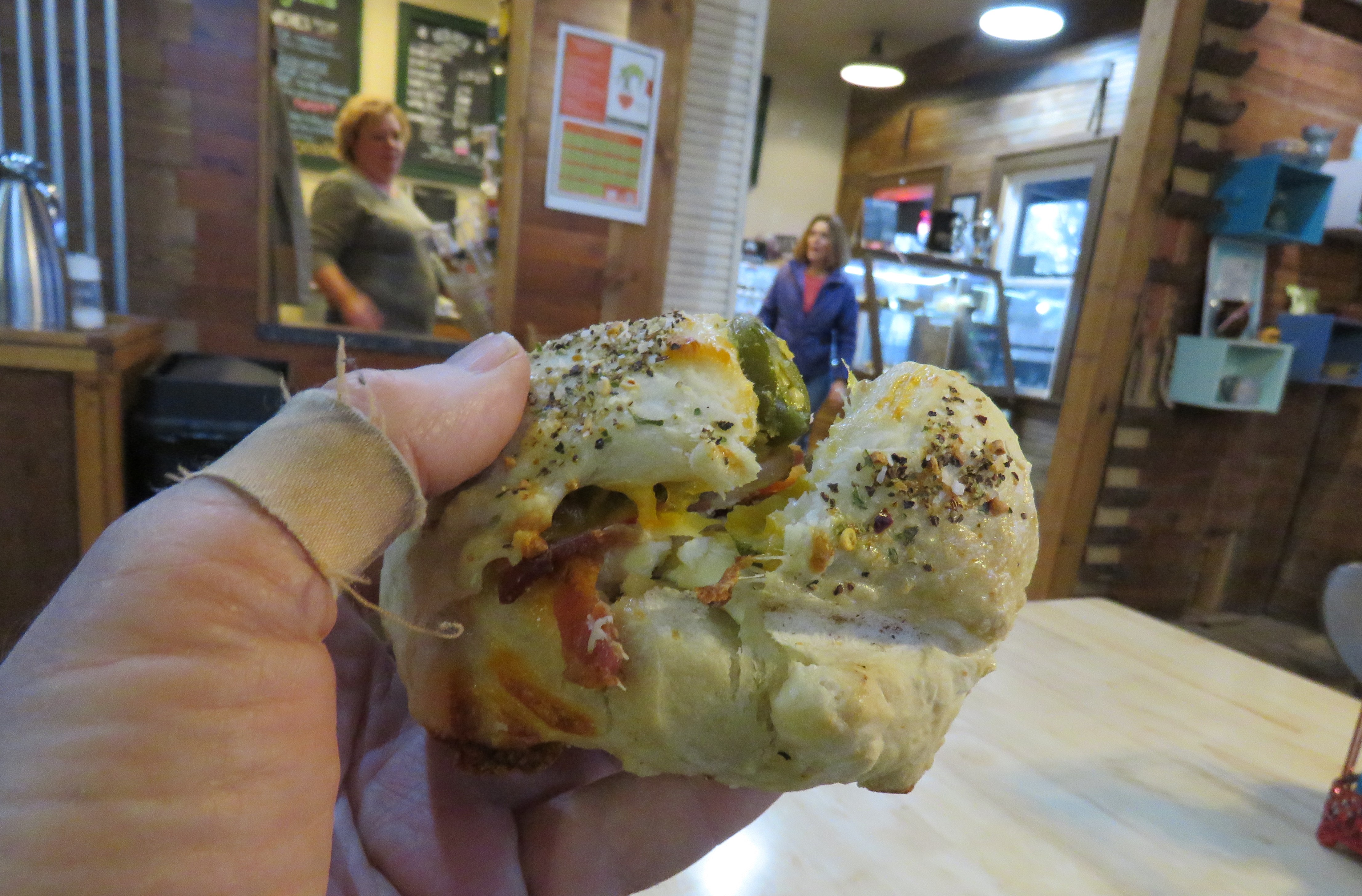 Attention was paid to the trailside habitat, for bluebirds favor open country near woodlands. With those thoughts in mind, we placed the nest boxes along a relatively heavily traversed section with favorable habitat between Indianwood Road in Lake Orion and the Burdick Road crossing in the Village of Oxford. We were not overly concerned on exact placement locations, for bluebirds readily take to human-modified habitat and don’t seem to care if the boxes do not follow exact specifications, a thought supported by the Cornell Lab of Ornithology on their website. “Eastern Bluebirds put their nests in natural cavities or in nest boxes or other artificial refuges. Among available natural cavities, bluebirds typically select old woodpecker holes in dead pine or oak trees, up to 50 feet off the ground.” Visit the Michigan Bluebird Society website if you wish to build and place a bluebird box to “exact” specifications.

Within minutes of placing one box, an inquisitive White-breasted Nuthatch landed on its roof and flitted about, prompting a quick discussion and the agreement that other cavity nesters would all be welcomed guests since the boxes were placed for human enjoyment, as much as for extra nesting habitat for the bluebirds. We believe, however, that the bluebirds will take to the boxes closer to Indianwood Road where there is more open area, since bluebirds tend to hunt insects over low grasses and meadows. Chickadees and nuthatches favor more wooded locations. 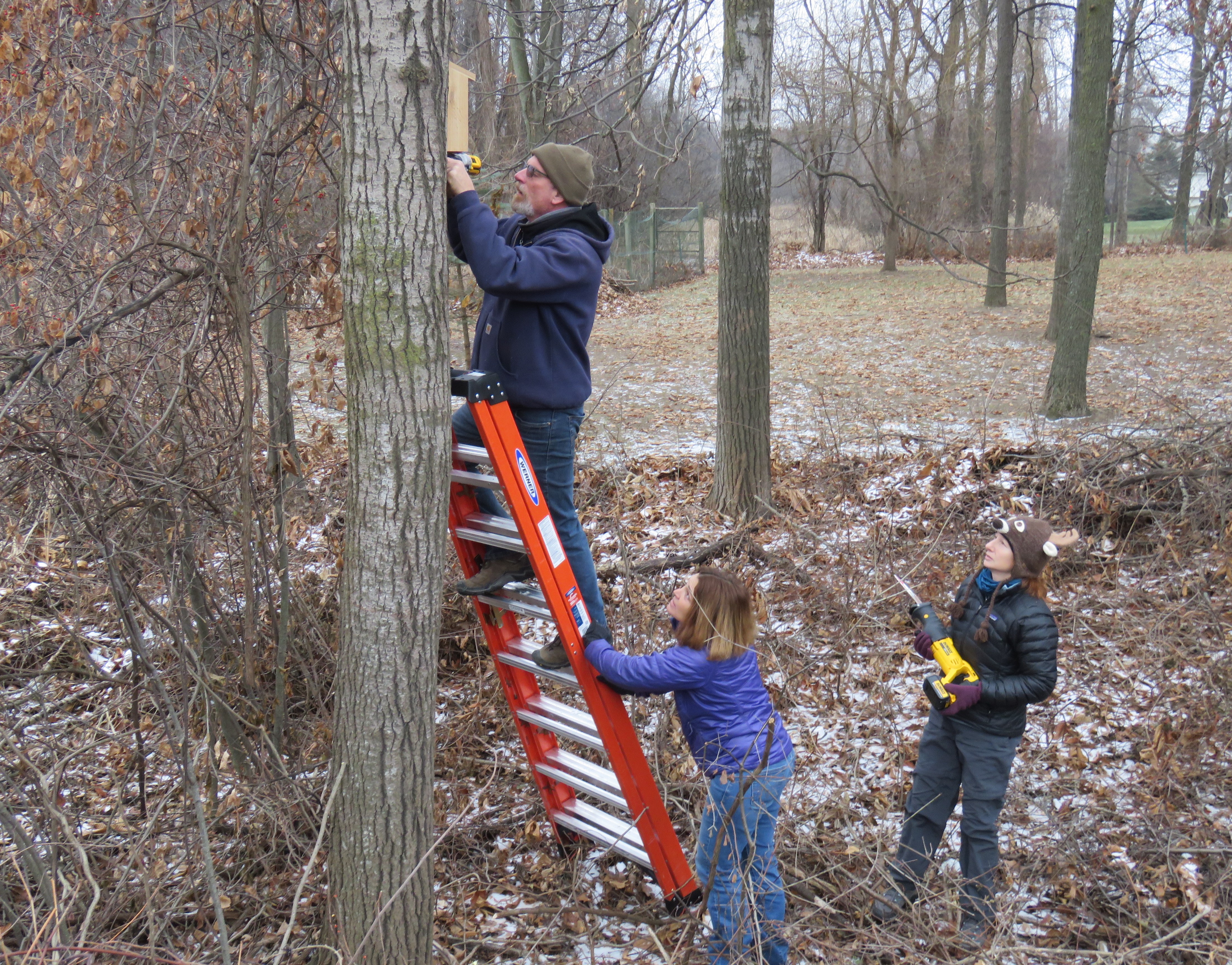 The Winter Solstice has arrived. The days will now slowly lengthen, bringing to mind another Thoreau quote, “The bluebird comes and with his warble drills the ice and sets free the rivers and ponds and frozen grounds.” Perhaps make 2019 the year to explore the winter wonders of our Polly Ann Trail and then listen for the warbles of our Eastern Bluebirds on the wilder side of Oakland County at the dawn of spring. 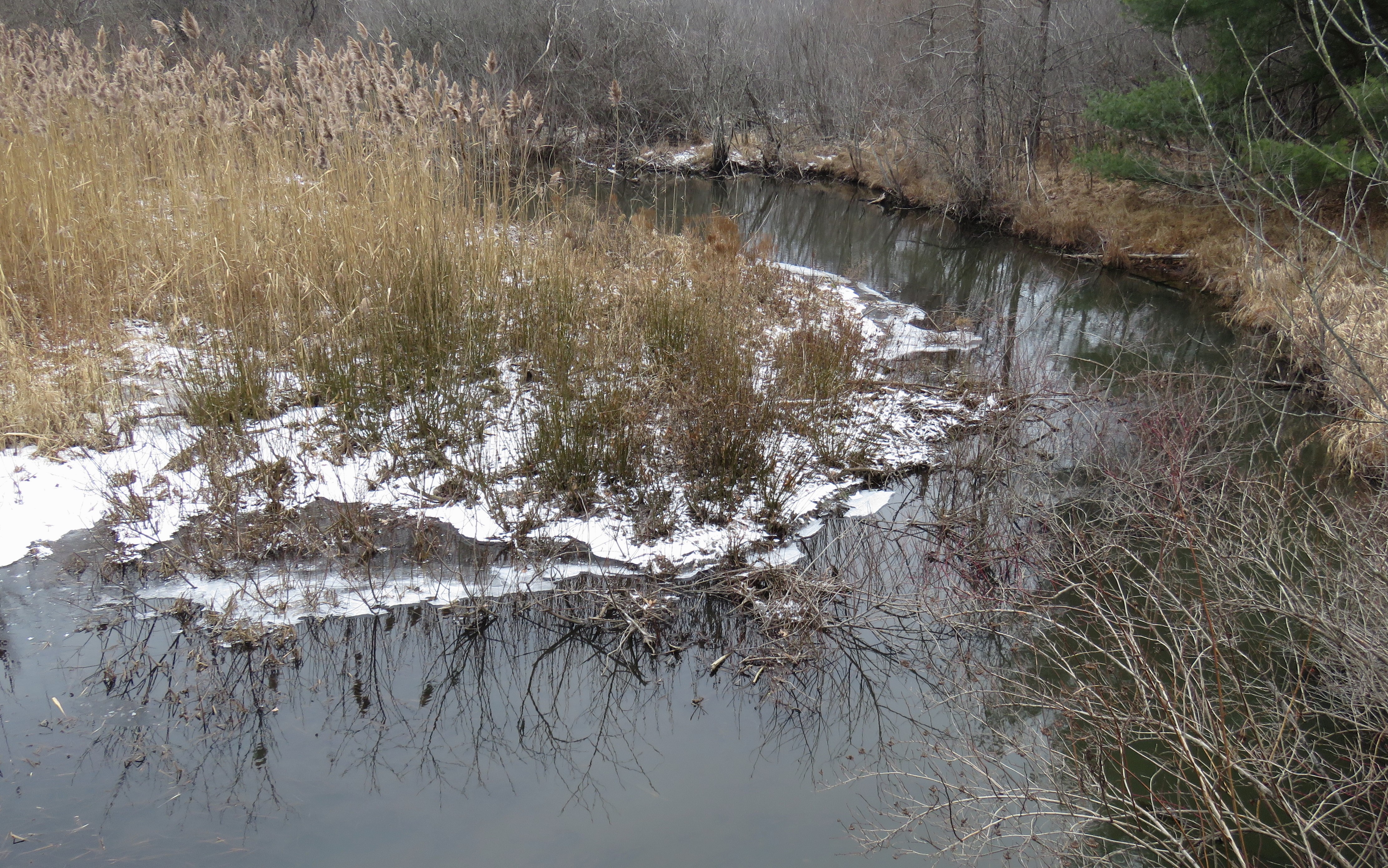