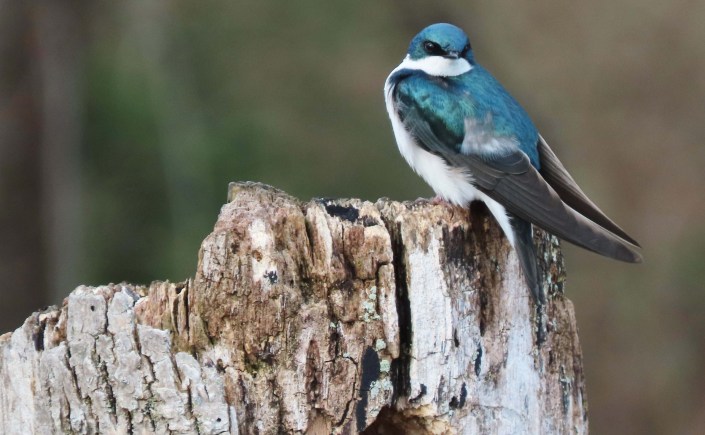 Tree Swallows are eye-catching aerialists with iridescent blue-green feathers and brilliant white fronts. Now that summer draws near, these beautiful birds are pursuing flying insects when they are not perched on nesting boxes, branches, or tree stumps. Their acrobatic twists, turns, dives, dramatic climbs, and changing of direction make capturing a photo in flight extremely challenging. However, the Tree Swallow pictured above, landed on a wetland tree stump and seemingly posed for a photo. The photo also gives a clue to the origin of their name.

Tree Swallows earned their name because they nest within small natural cavities in dead trees or nesting holes abandoned by woodpeckers. Those trees, with almost no exceptions, are in or next to water. Cliff Swallows tend to nest in a cliff, Bank Swallows in sandy river banks, Barn Swallows in a barn, and of course Tree Swallows in a tree. If you want to see Tree Swallows, do not search for them within a woodland. They will not be there. Tree Swallows are habitat “specialists,” and when it comes to nesting they have very specific needs, unlike House Sparrows that are “generalists” with no specific habitat need.

Natural tree cavities are becoming harder to find when dead trees at the wetland’s edge are removed, but are increasing in other areas when nature is allowed to run its course. To be attractive to Tree Swallows, dead trees must be located in open areas very close to or within a wetland, with nearby fields or meadows. Those conditions are perfect habitat for nesting and hunting flying insects.

Tree Swallows and Eastern Bluebirds often share nesting habitat. Sometimes they coexist nicely, but at times there are obvious squabbles as to who lives where. Bluebird boxes will readily attract Tree Swallows if they are in the proper habitat, with one significant requirement: a wetland needs to be near. Novice birders sometimes confuse the two species, but these side-by-side images show obvious differences; especially with the white fronts of tree swallows and their sleek appearance. Bluebirds do not have this sleekness, and have a subdued orange-brown breast.

Some natural nesting sites are isolated, others are located in busy parks managed by Oakland County Parks and Recreation and Huron-Clinton Metroparks. Most of the images I used to illustrate their behavior and habitat were captured at Independence Oaks County Park, but the photo at the top of the blog is from a small wooded wetland near my house. Other images are from a Tree Swallow friendly wooded swamp behind Lake Orion High School.

Tree Swallows tend to be a highly social species, and many will nest near each other, particularly where nest boxes or natural cavities are numerous. They can also be very territorial and swoop at and dive bomb human intruders that get too close to a nesting box. I confirmed that fact unintentionally last week while photographing them in a meadow at Independence Oaks.

I parked not far from the entrance to Camp Wilderness, and a lone Tree Swallow was my greeting party. It was perched on the parking sign almost immediately in front of me and held its position when I got out of my car. The Tree Swallows that live in the adjacent field are well accustomed to human activity and provide excellent viewing opportunities, especially in early morning.

While I was meandering a trail that goes through their habitat, the Swallows went about their business, totally ignoring my presence and the presence of runners on the same trail. Some stayed perched on their nesting boxes while others swooped about overhead feasting on flying insects. However, as soon as I stepped a few feet off trail for a closer image of a nesting box, a lightning-fast swoop toward me delivered a very clear message: “get back!” I quickly did.

I watched them for almost two hours and it was obvious that most of their foraging was while in flight, but occasionally I would see one on the ground or in shrubbery, perhaps after insects or old berries. I noticed one Tree Swallow fly up into a tree on the far side of the parking lot and could not figure out at first why it was up there. When I zoomed in with my telephoto lens, I realized why the Tree Swallow had flown up to the branch—to mate with a perched female. As the female was perched on a limb and the male hovered over her momentarily before landing on her back and outstretching his wings for balance to complete the mating process.

The more I watched the swallows, the more questions I had about all their general behavioral and migration patterns. I even returned to the field twice more just to watch their behavior. After a field mower went by cutting at the edge of the trail, they seemed to be hunting for insects on the ground, perhaps stirred up by the mower. These facts from the Cornell Lab of Ornithology answered some of my questions.

I discovered from my research and personal observations that Tree Swallows tend to glide more than any other swallow species. When they feel the need to bathe, they fly low over the water and skim their bodies against the surface, then rise rapidly while shaking off droplets. I witnessed that low flying behavior at a pond near my house, the wetland behind Lake Orion High School and in the dawn’s early light from the shoreline of Crooked Lake at Independence Oaks County Park. By the time you read these words, Tree Swallows will be busily flying back and forth to their nesting boxes to be greeted with wide open mouths, each one clearly proclaiming, “feed me first!”

One thought on “Tree Swallow Tales”