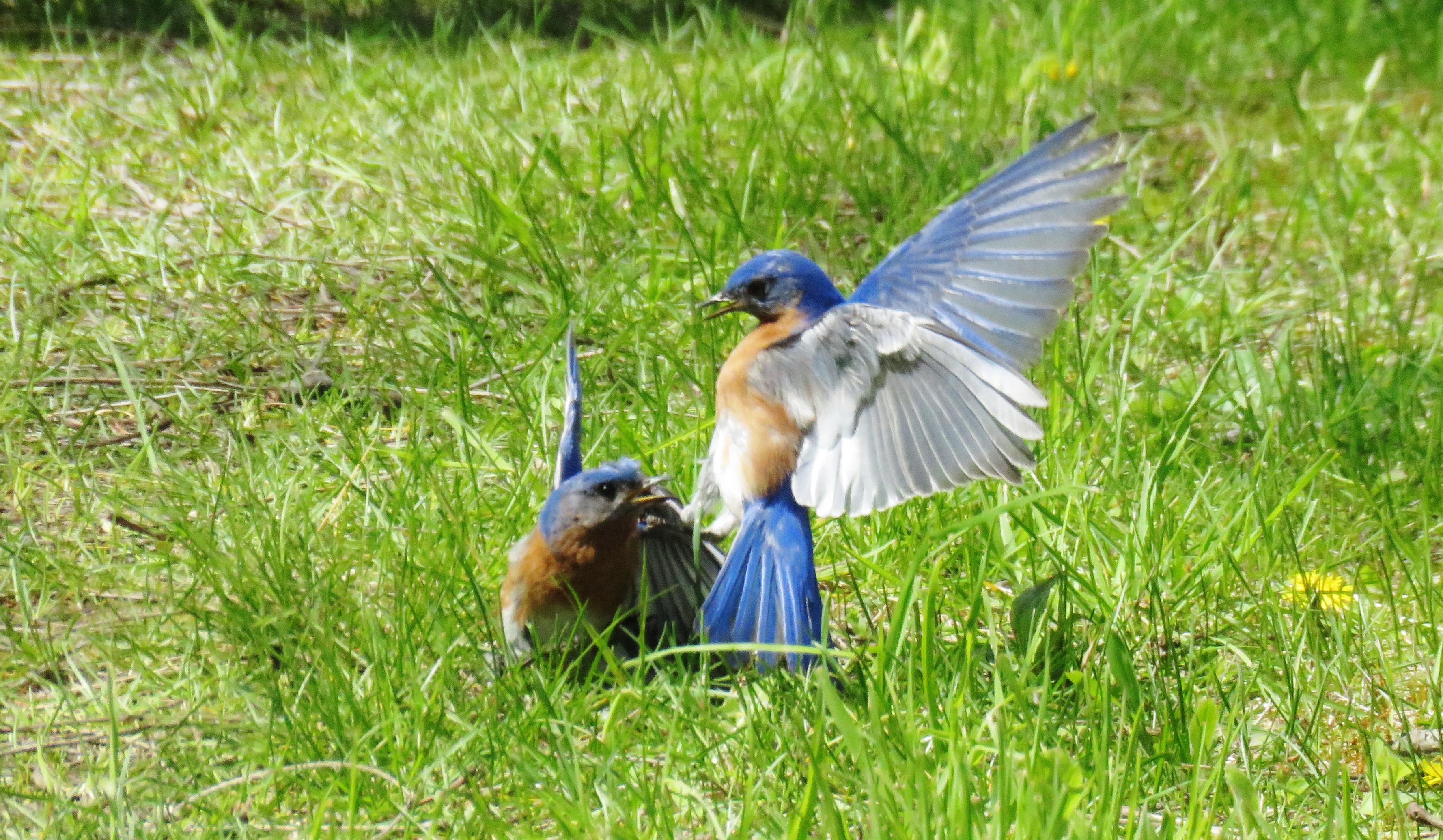 With its brilliant royal blue back, and rusty-red brown breast there is no mistaking a male Eastern Bluebird. They are heralded as one of the first Oakland County birds of spring. Naturalists and writers have long associated the arrival of bluebirds with spring. On March 2, 1859, Henry David Thoreau wrote, “The bluebird comes and with his warble drills the ice and sets free the rivers and ponds and frozen grounds.” It is now the 23rd day of June in 2017 and the heat of the summer has already arrived. Bluebirds keep warbling, not to melt ice, but to announce round two of their nesting season. The fact of the matter is clear, many of our bluebirds did not migrate and ate old berries and fruits all winter, with occasional visits to suet feeders.

Take a leisurely summer walk into bluebird habitat and you just might see some high drama that looks a bit like a championship wrestling match between male bluebirds. The meadows and fields of many of our larger parks have excellent habitat that is attractive to Eastern Bluebirds, and provide excellent viewing opportunities for nature lovers that combine patience with watchful eyes. Addison Oaks County Park, Independence Oaks County Park, Indian Springs Metropark, Kensington Metropark, Orion Oaks County Park, Seven Lakes State Park and Stony Creek Metropark are some of my favorites for bluebird observations. Orion Oaks even has an aptly named Bluebird Trail. Birds know no borders, so as you wander any trails or pathways in these early days of summer, watch for them perched on low to the ground poles and tree branches. You may even see them fluttering down to the ground in pursuit of insects in spacious yards that have not been poisoned with insecticides. Early last summer I noted a trio of young bluebirds flitting about the edge of Polly Ann Trail very near where it passes just south of the Oxford Fire Station. 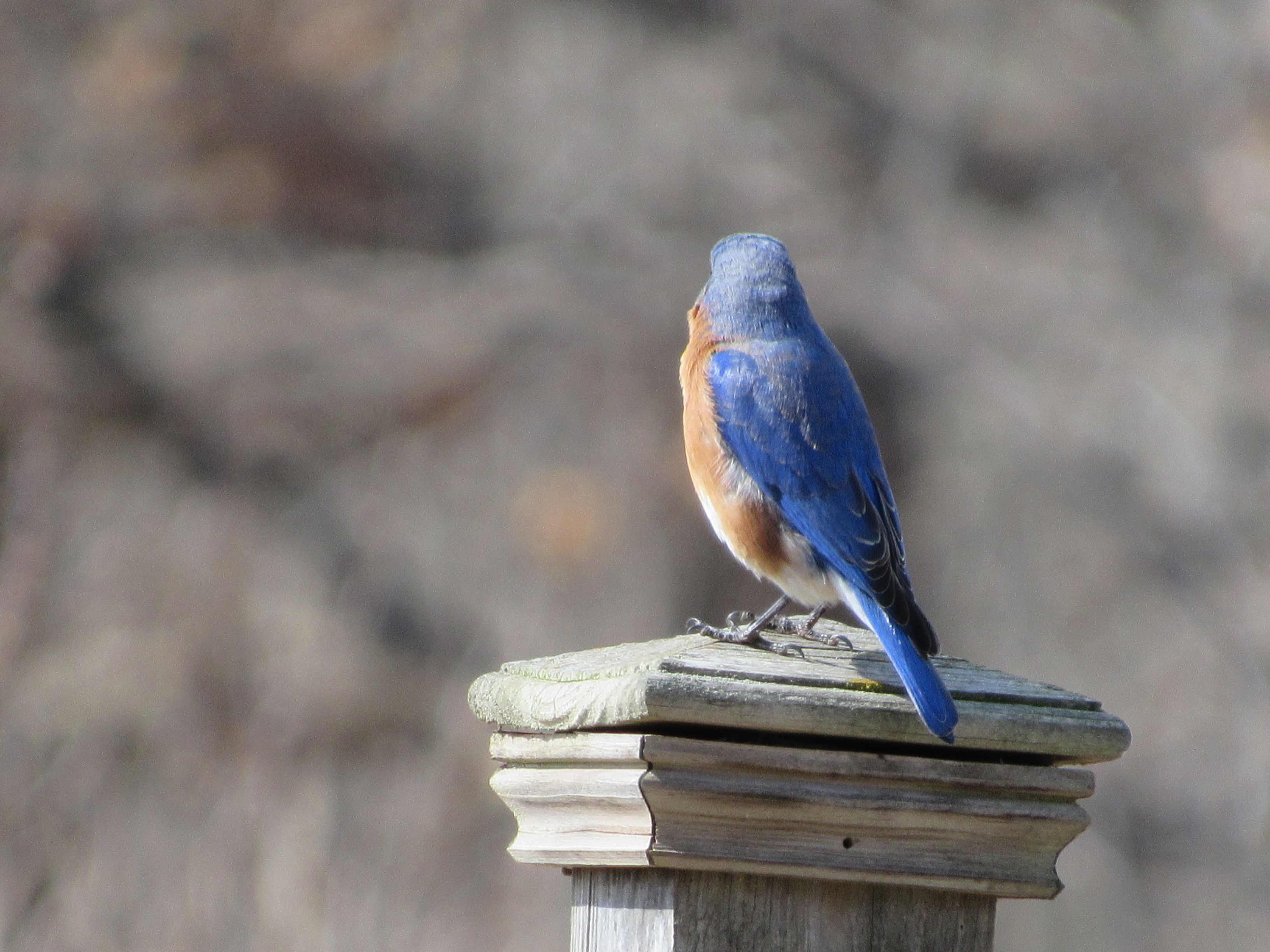 The female Eastern Bluebird draws less attention than the flamboyant look-at-me male with his royal blue back that prompted Thoreau to also write, “The bluebird carries the sky on his back.” Perhaps Thoreau never noticed the more subtle beauty and behavior of the females, for they are absent in his writings. If you missed noting the presence of female bluebirds in the spring, look again now. Although far more gray in color than the male, they have tinges of blue on their wings and tail feathers, and as might be expected, females do most of the work when it comes to nest-building and repair. 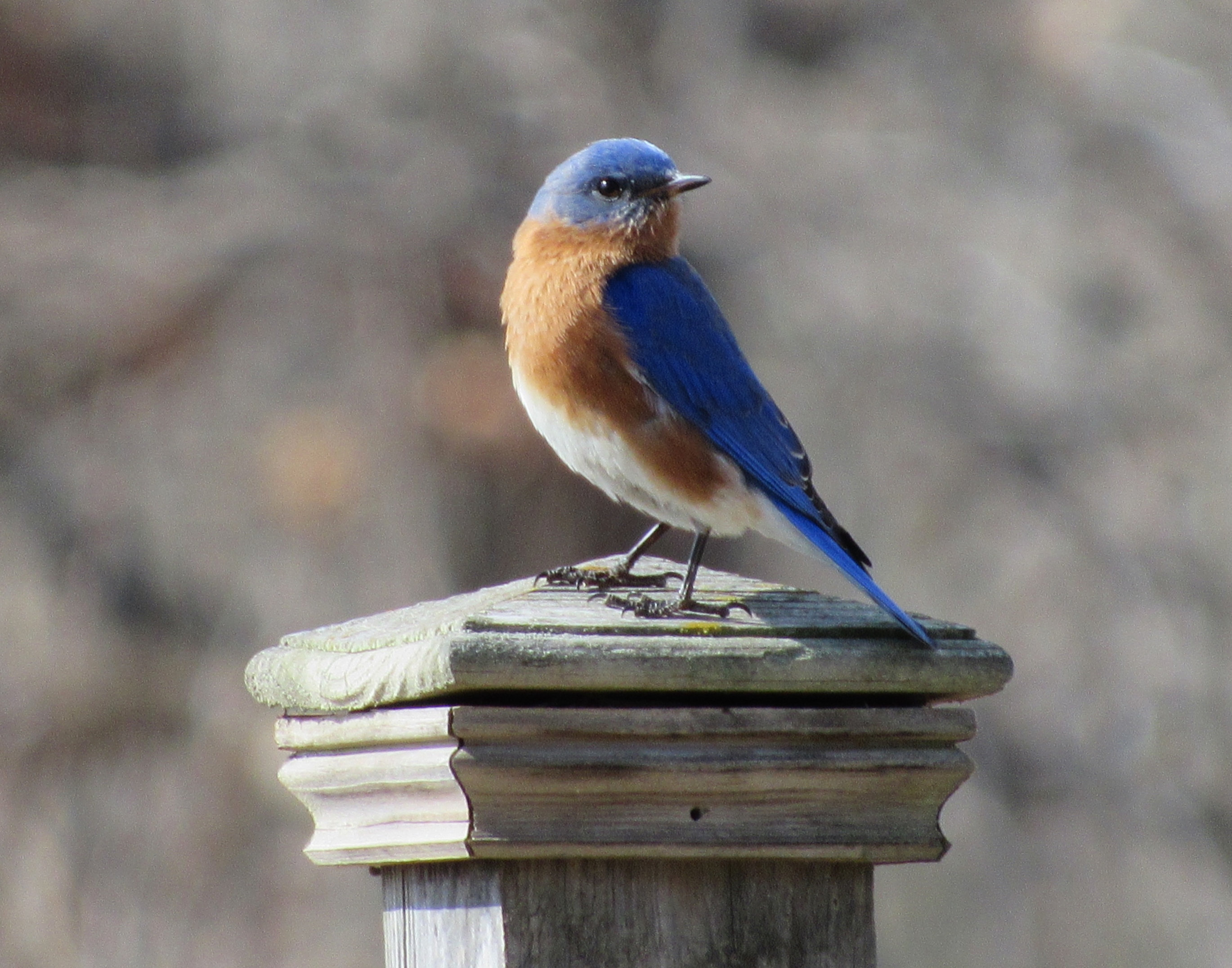 The males’ only real contribution to nest-building is bringing nesting materials to the nesting site, and that is done with a real show of flare, spending much of his time sitting above the nest and waving his wings about. Perhaps it’s meant to draw her attention, or perhaps it’s his guard duty behavior. The nest is usually created inside a tree cavity abandoned by a woodpecker, or in an old farm fence post, and of course bluebird boxes strategically placed in the proper habitat work wonders. The actual nest is a carefully crafted creation inside the tree or nesting box and depending on the available ‘building supplies’, may be made of pine needles or grasses woven together to create a basket. It may even be lined with bits of hair, feathers, fine grasses or other materials found at hand. Eleven to 14 days after being laid, the pale blue eggs hatch, and round two of feeding hungry mouths is underway. 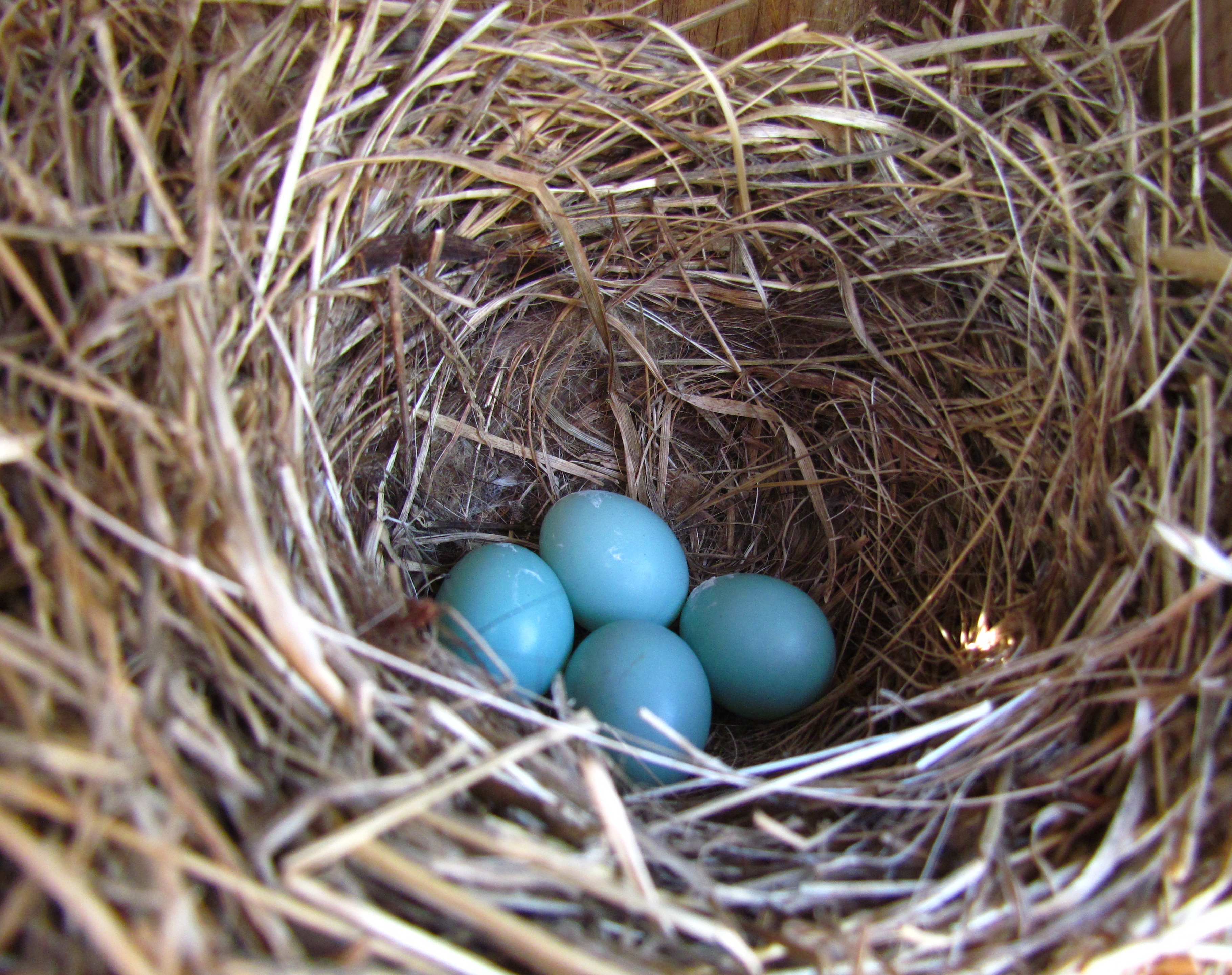 A bluebird box placed in a forest is not going to attract bluebirds. Eastern Bluebirds are not birds of woodlands and have a strong preference and need for open habitat with nearby cover and nesting locations, but they are also opportunists. Many nest in human altered habitat including the edges of golf courses.

It was the widespread campaign encouraging the proper placement of bluebird boxes over three decades ago that gave this species a second chance to flourish and prosper in the countryside and near human habitation. Summer is not the time to place new bluebird boxes, but it is the perfect time to look for bluebird activity and plan for next year. Ideally, boxes should be placed before the snow melts in spring. Summer is also a perfect time to witness the continuing territorial disputes between male eastern bluebirds. Territorial establishment is more than a matter of song, proclaiming, “This land is my land, this land is not your land.”  Sometimes it’s a matter of combat that looks more real, than ritualized. The images of a territorial dispute were captured in northern Oakland County as two males seemingly wrestled and fought for over ten minutes with brief time-outs to decide who stays and who goes. I was never able to determine the winner, if there was one, nor did I spy the female watching her suitors. 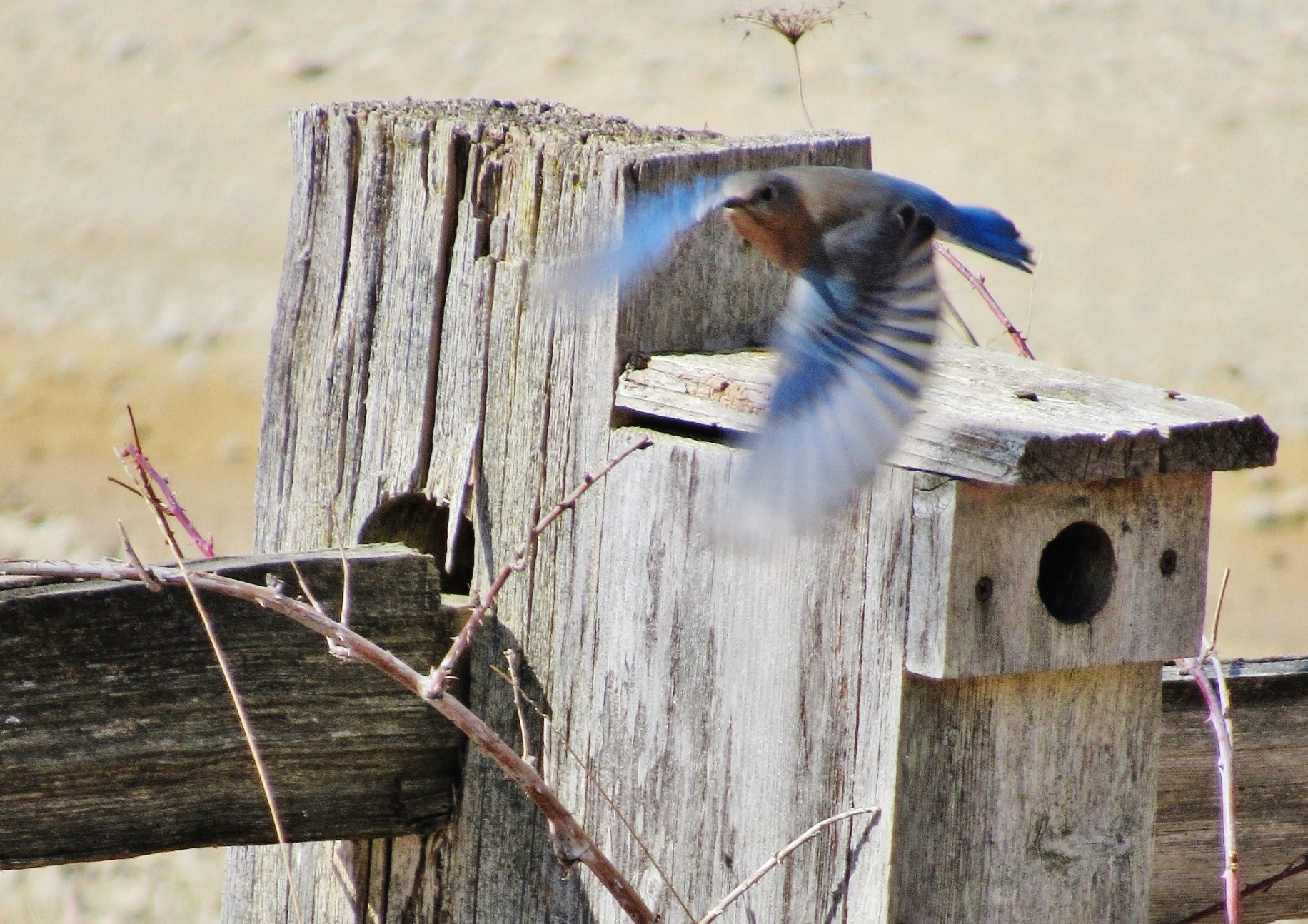 Summer is also a great time to watch their live prey hunting behavior. They are an omnivorous species depending heavily on seeds and wild dried fruits in the winter, but in summer, they feed mostly on small insects of all sizes that can be captured on the ground. The bluebird is a skilled dive-bombing hunter. It sits on a low branch waiting for movement beneath and then quickly flutters down to grab a grub, snail, worm, cricket, fly, grasshopper, spider or almost anything else that is tiny and moves about the ground. 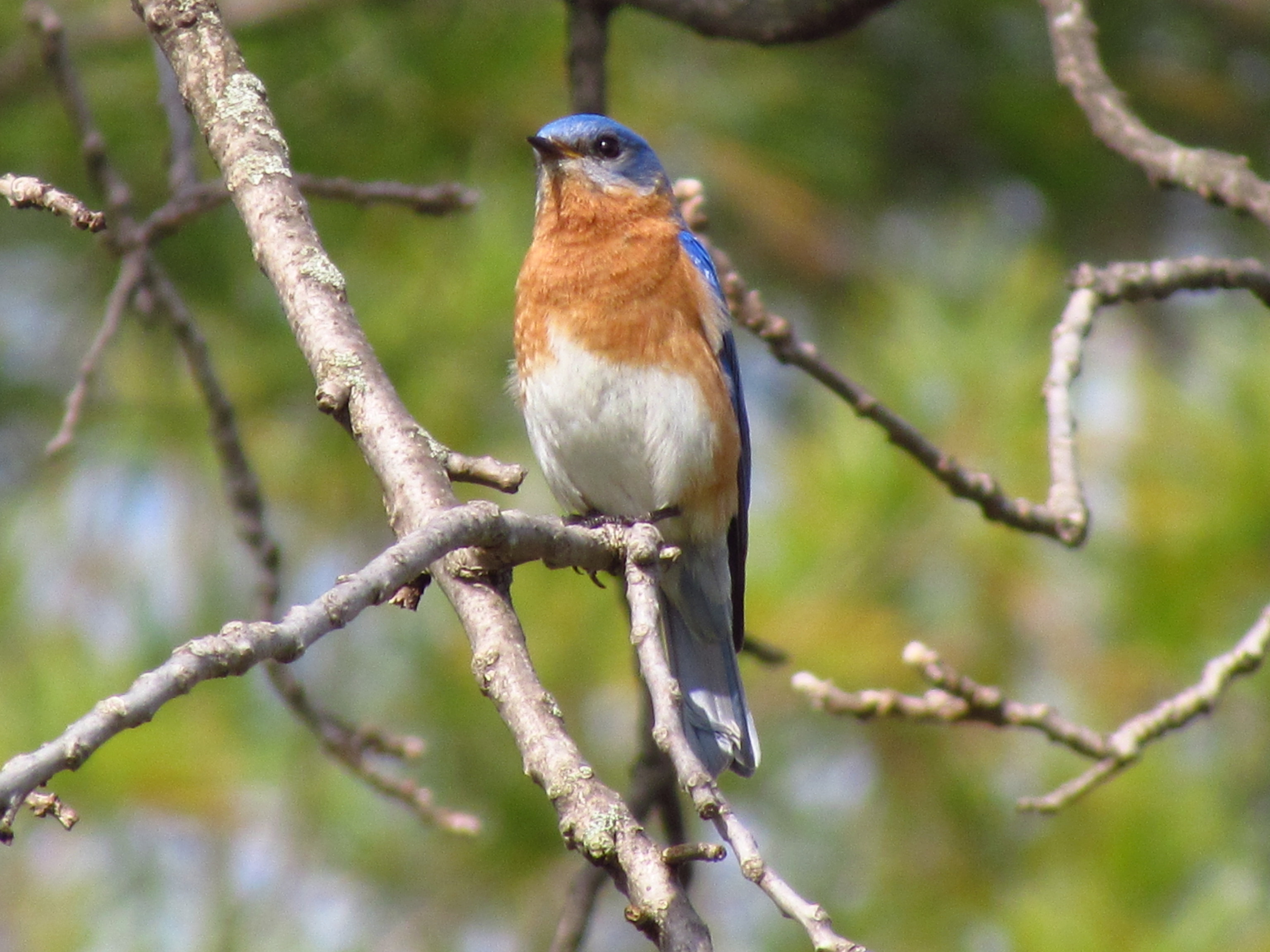 BirdWatching-Bliss.com has easy plans for building bluebird boxes, a demonstration video showing how to build the box and links about bluebirds that will help you plan ahead to attract these beauties next year. But why not make the heat of this summer a time to watch for the bird that carries the sky on his back, and in doing so enlivens the wilder side of Oakland County.

6 thoughts on “Eastern Bluebirds On the Dawn of Summer”