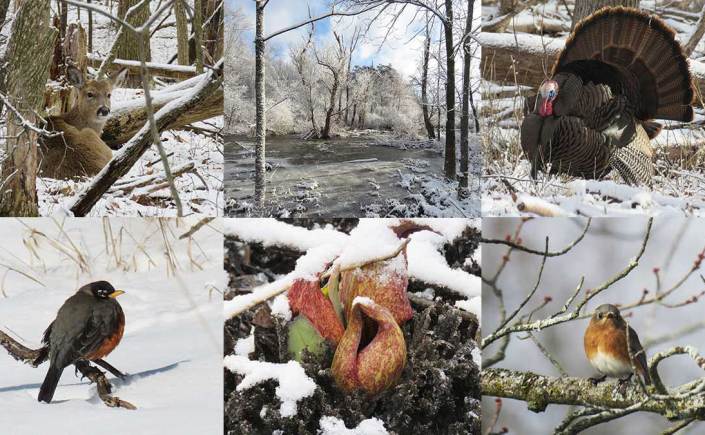 Ten days have raced by since snow blanked Oakland County, and the mercury plunged to ten degrees below zero. Spring has accelerated her annual duel with winter, and no matter how long it takes, spring always wins. The sights, signs, and sounds of nature’s way in February’s last days are everywhere.

Robins have emerged from their seed-rich shelter of shrubs and bask in the sunlight above snow-covered fields, perhaps dreaming of worms. Great Horned Owls are nesting. Barred Owls perch at the edge of woodlands, watching and waiting for dinner to pass by.

Red foxes have mated and hunt for meadow voles under snow, and then it’s back to their den before dawn’s early light.

For the 9th season, Bald Eagles are back on their nest at Stony Creek Metropark, and their stick gathering activity to reinforce and modernize their enormous nest has increased. My friend, Joan Bonin, provided these amazing images from her authorized vantage point through her camera’s powerful lens. She explained:

“This is the time for nest restorations and bonding/mating rituals for our resident pair. They are so active this time of year, bringing branches to the nest, whispering sweet nothings to one another, grooming, and bringing prey into the nest for joint meals. Around the first week of March, historically, the first egg will be laid. Business will change to incubation and things will settle in for at least the next 35 days. Then it will be time to sit back and wait for the first head to peak over the nest wall.”

The dramatic activity of those eagles reminds us spring draws near, but perhaps the most definitive sign that February’s fading is the increased sightings of Eastern Bluebirds. Although many bluebirds overwintered in Oakland County, we see them more now, often perched on tree branches overlooking meadows, visiting bird feeders filled with suet, and flitting about last year’s bluebird houses.

The waning days of February always bring one of my favorite Thoreau bluebird quotes to mind, “The bluebird comes and with his warble drills the ice and sets free the rivers and ponds and frozen grounds.” The Journal, 1837-1861 (Thoreau, 2009) This video from last February at Indian Springs Metropark might have presented the mesmerizing sight and magical sounds that inspired Thoreau’s words. Look closely as you listen to the gurgling waters. The video also reveals another secret of nature’s ways in the waning days of February, the emergence of skunk cabbage.

Skunk cabbage is a thermogenic plant, meaning it creates heat, and that heat enables it to push up through frozen earth, snow, and creekside ice. Sometimes it appears in small clusters covering less than a yard, but in a few weeks, I’ll return to Bald Mountain Recreation Area in Orion Township and try to detect thermal differences at my favorite patch of skunk cabbage that covers over an acre of high-quality swampy habitat.

Wild Tom Turkeys are gobbling and strutting their stuff to attract the hens at Kensington Metropark and in the woods of the Stage Nature Center in the City of Troy. Early risers – count me among them – rejoice in the dawn music of Sandhill Cranes that have returned to their nesting grounds at Rose Oaks and Addison Oaks County Parks, and Kensington Metropark. Aldo Leopold described their beautiful return this way in A Sand County Almanac (Leopold, 1949): “On motionless wing, they emerge from the lifting mists, sweep a final arc of sky, and settle in clangorous descending spirals to their feeding grounds. A new day has begun on the crane marsh.” Some of those cranes remain wary of humans, while others strut boldly along park trails.

Red-winged Blackbirds, true harbingers of spring’s approach, are appearing amidst cattails, often just yards from muskrat lodges that remain capped in snow. About the time the snow finally melts, the male red-wings will be flashing their red epaulets and singing their territorial songs. Mink and weasels – yes, Oakland County has both – are on the prowl, bounding through snowy marshes, always hungry and thinking spring.

Skunks wander woodlands at night searching for mates. Although chiefly nocturnal, I photographed this one scurrying away from bird feeder spillage after its late night out and early morning snack. Deer still wear their winter coats, and those that are acclimated to human presence stay bedded down much of the day, casually watching human intruders who walk slowly along our trails.

Chickadees fluff up their feathers on frigid February mornings to trap a layer of air as insulation. Goldfinches are already brightening their colors and singing their spring songs as breeding season approaches. Frost crystals around wildlife dens are stunning, and the urine in the snow (pictured below) confirmed that a mammal was down under.

Red-tailed Hawks seem more prevalent on blue sky days, or perhaps I just notice them more as they soar above the fields and meadows. Squirrels seem supercharged with energy. Some create new nests, others become meals for Red-tailed Hawks.

For those of us that wander or cross country ski in woodlands, day or night, and listen to nature, her message is clear: Spring is coming. Lake ice crackles and booms under the nearly full moon, maple sap will soon flow, owls hoots and eastern coyotes bound through snowdrifts on rabbit hunts, a fact confirmed by tracks in the snow and exciting trail camera captures on the wilder side of Oakland County.

Tomorrow, February 27th brings the Snow Moon, a full moon that reminds us February is usually the month with the most snow. This year, that was confirmed, unless March brings major snowstorms. Visit the Old Farmer’s Almanac website to learn about the history behind the snow moon.

As February fades, even on frigid days, I spend as many hours in the woodlands and fields and alongside creeks as I can. Nature’s way is where you find it, and some of the best memories were made on the darkest days. That’s something very few people understand until they have embraced the wonder of nature’s way and the peaceful winter solitude of late February and the early days of March. It’s the kind of solitude that is enhanced when shared with someone with a love of nature. Head for a trail and meander slowly, and you too may embrace the little things of nature’s way that we often overlook, such as this colorful fungi laced with algae, clinging to a tree, adding brightness to a world of white.