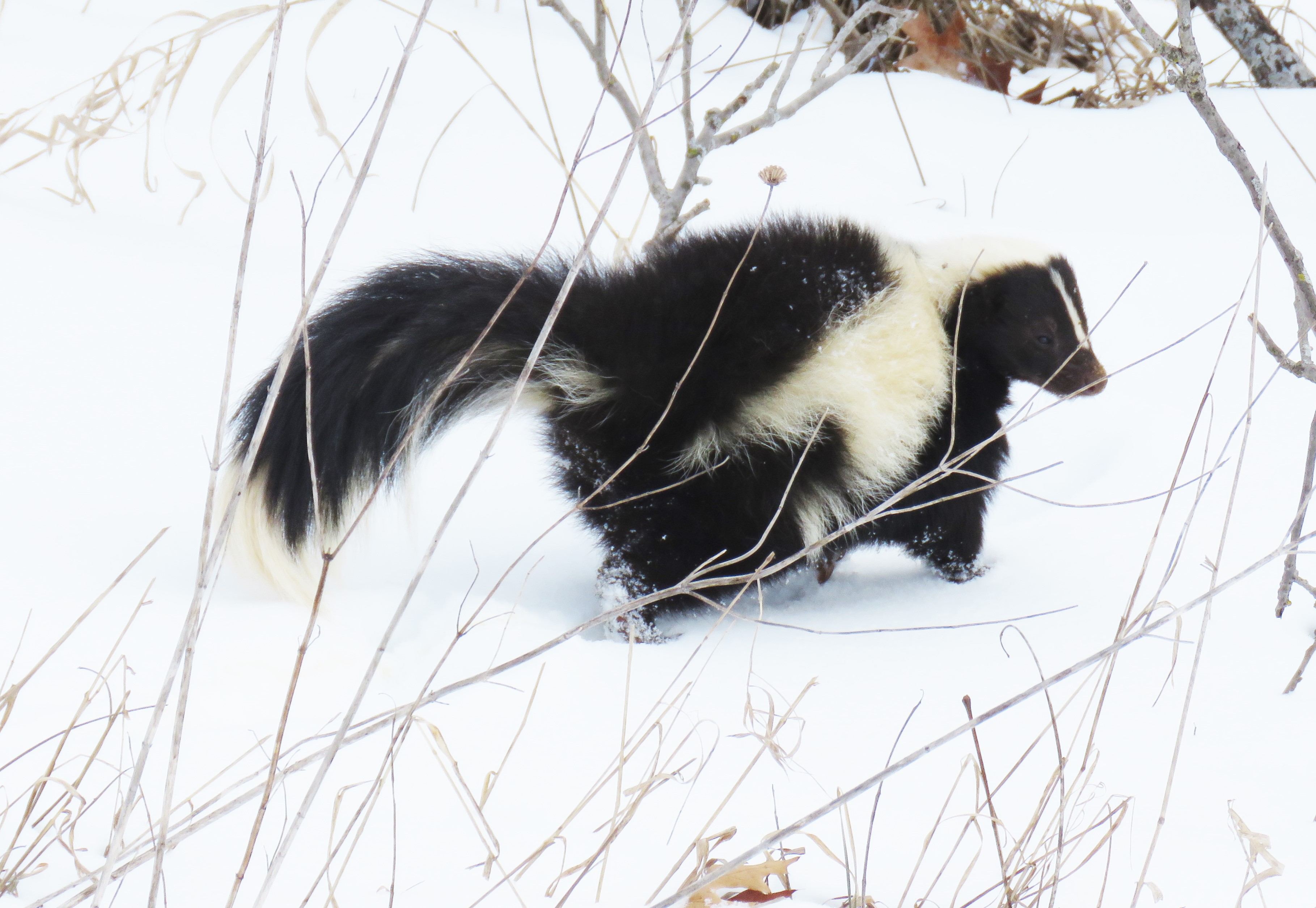 Love is in the air. Eastern striped skunks (Mephitis mephitis) are wandering in search of mates all across Michigan’s lower peninsula. During frigid months, skunks had hunkered down in their winter dens for periods of days, or sometimes weeks, and rarely ventured topside. All that is changing now as spring draws near and weather patterns become more unstable. Skunk sightings are on the uptick in Oakland County and without a doubt, their more-or-less dormant mid-winter slumber has ended. 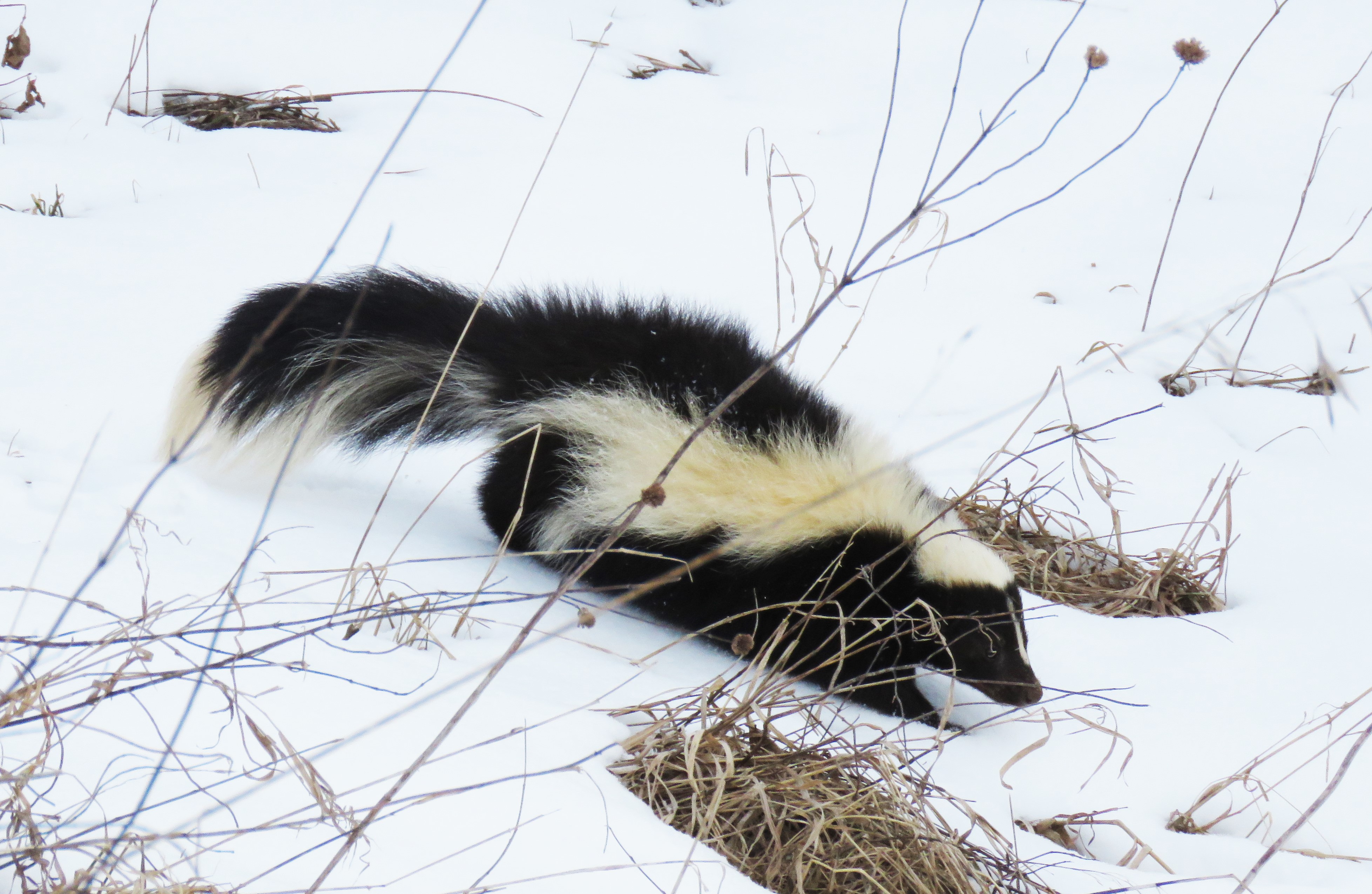 Thursday’s temperature climbed toward the 60 degree mark and increased their wanderings, including encounters that ended poorly and perfumed the night air after encounters with dogs, raccoons and opossums. Much to the chagrin of homeowners, some of those skunks sought comfort under decks, porches and outbuildings. Other skunks met their demise when crossing roads, attracting the attention of crows and other creatures that simply look at a dead roadside skunk as an easy meal.

As the duel between winter and spring accelerates, I chat with people who seem surprised that skunks live in our midst. They shouldn’t be, for skunks are extremely adaptable and are found just about everywhere in our county: fallow farm fields, meadows, woodlands, parklands, suburban yards, city parks and urban alleys. They’re even found next to my old barn where one wandering skunk posed rather nicely for photos after my unintended intrusion sent him scurrying out of his rather cozy hiding place – without taking much offense to my presence, I might add. I did, however, back off and then follow his circular wanderings for a few hundred feet. I suspect he returned to my barn after I retreated and will perhaps take up residence in a seemingly abandoned groundhog burrow under the barn’s crumbling foundation, a site that offers more shelter than a stall, with rotting wooden planks and old straw. 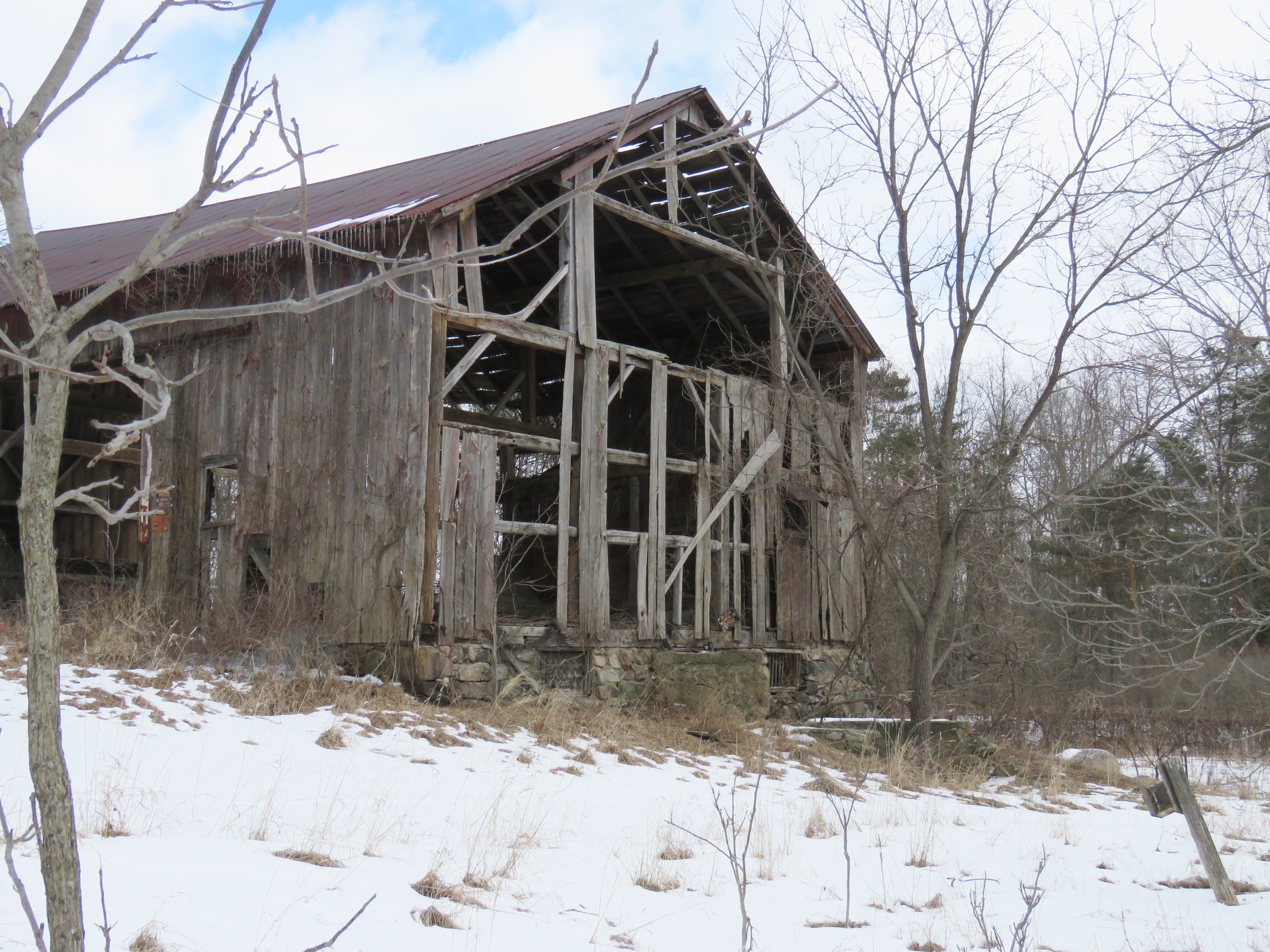 Skunk habitat is just about anywhere we live. Skunks have a preference for denning in transition areas, sometimes called edge zones, where open fields meet woodlands, or thick shrubs meet manicured lawns. That makes Oakland County residential areas especially attractive. Skunks thrive all across our county, from the busy streets of Pontiac, Southfield and Rochester, to the manicured shrub-lined lawns of the Bloomfields and the wide open spaces of northern Oakland County. Early rising runners that head out in the dawn’s early light might well encounter a skunk along the Polly Ann and Paint Creek Trails, or even near their own houses when they run through subdivisions just as a skunk meanders home from a night of foraging.

After the last of the snow melts, a lawn is just as likely to attract a skunk as the muddy banks of a meandering creek. For it’s all about habitat with an easily accessible food supply. Skunks are omnivorous creatures with few “dietary restrictions” and will devour just about anything. During winter months, they hunt mice and meadow voles and scrounge for old fruit. However, now that the first big spring thaw is behind us, they will dig about exposed sections of lawns in search of “grubs” and tear apart decaying logs on the forest floor in hopes of finding hibernating insects or uncovering sluggish worms, or perhaps a salamander. 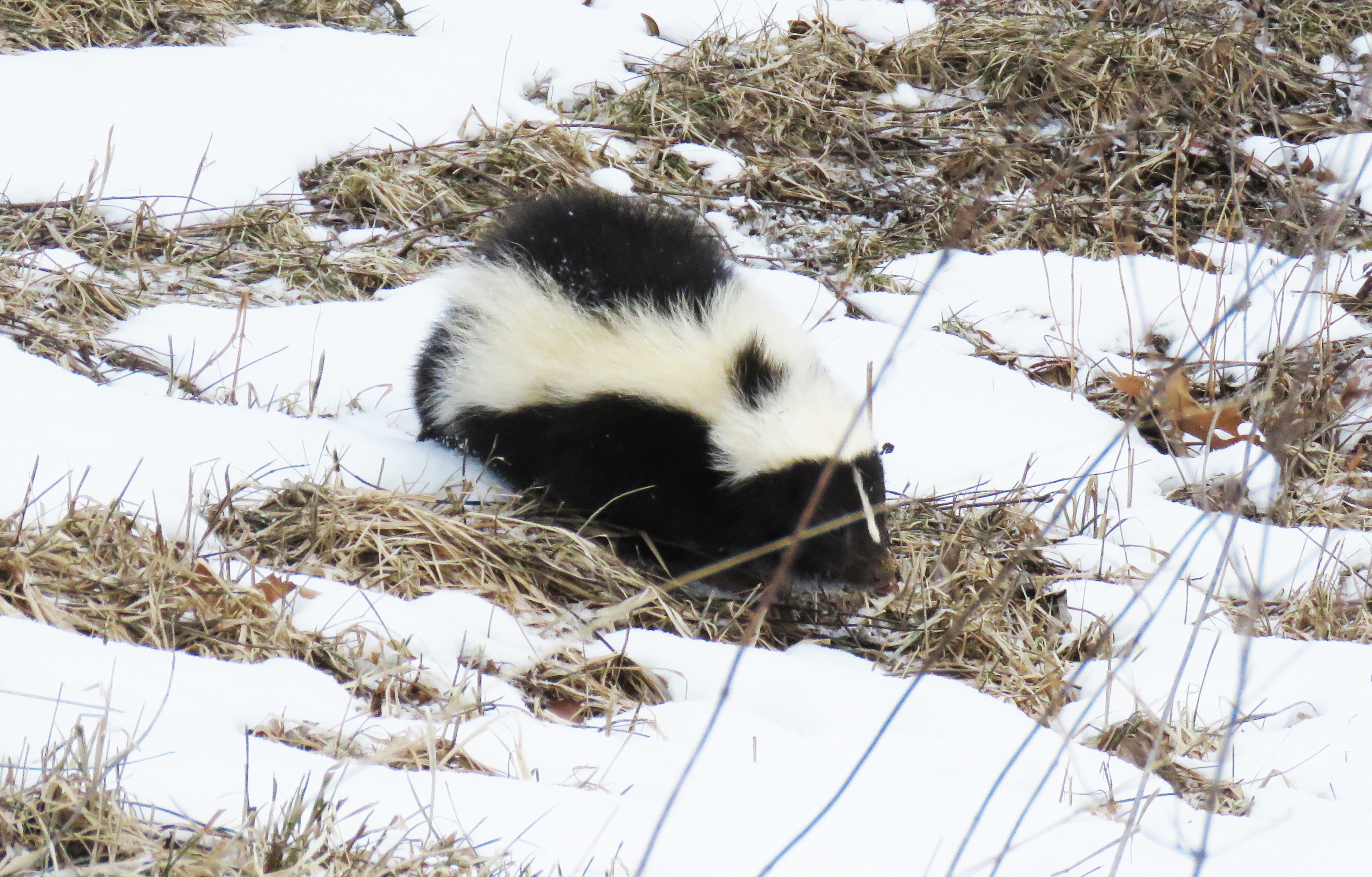 Skunks are often vilified for their defense mechanism: a pungent odor that is unforgettable and very effective in repelling most predators, with the notable exception of Great Horned Owls and some domestic dogs that never seem to learn. Standing its ground and resorting to chemical warfare is a last resort defense measure for skunks. First, it will try to “gallop” away from an approaching enemy, be it a dog or member of the human species. If that fails, and the enemy closes in, it will usually turn to face the approaching threat while stomping its front feet. That is the final warning. If the feet stomping does not force retreat, the skunk will spin about, raise its tail and spray from twin “nozzles.” I’ve witnessed this act twice over the years from a relatively safe distance and noted that the skunk positions itself in such a way that it can look back at its target as it raises its tail to spray. The spray can go 10 to 15 feet, in an arc-like pattern that assures it will hit its target.

The Canadian Wildlife Federation explains the process of spraying this way,

“The scent of the skunk is produced by a thick oily fluid or musk, secreted by two glands located on each side of the anus at the base of the tail. The glands are about the size of a grape and contain about a tablespoon of musk, enough for five or six discharges. The glands are connected by ducts to two small nipples that are hidden when the tail is down and exposed when the tail is raised. The musk is produced rather slowly, at a rate of about one-third of an ounce a week, and is discharged only as a last desperate measure after repeated warning signals.”

To “de-skunk” a pet that ignores the warning signs and ends up being sprayed by a skunk, you can make your own “Skunk Odor Solution” from common household ingredients: 1 quart of 3% hydrogen peroxide, 1/4 cup of baking soda, and 1 tsp. of liquid dishwashing soap. Mix the solution only when needed and don’t leave it stored in a sealed container. Soak your pet’s fur in the solution (do not get it in the eyes) and then rinse thoroughly with plain water. 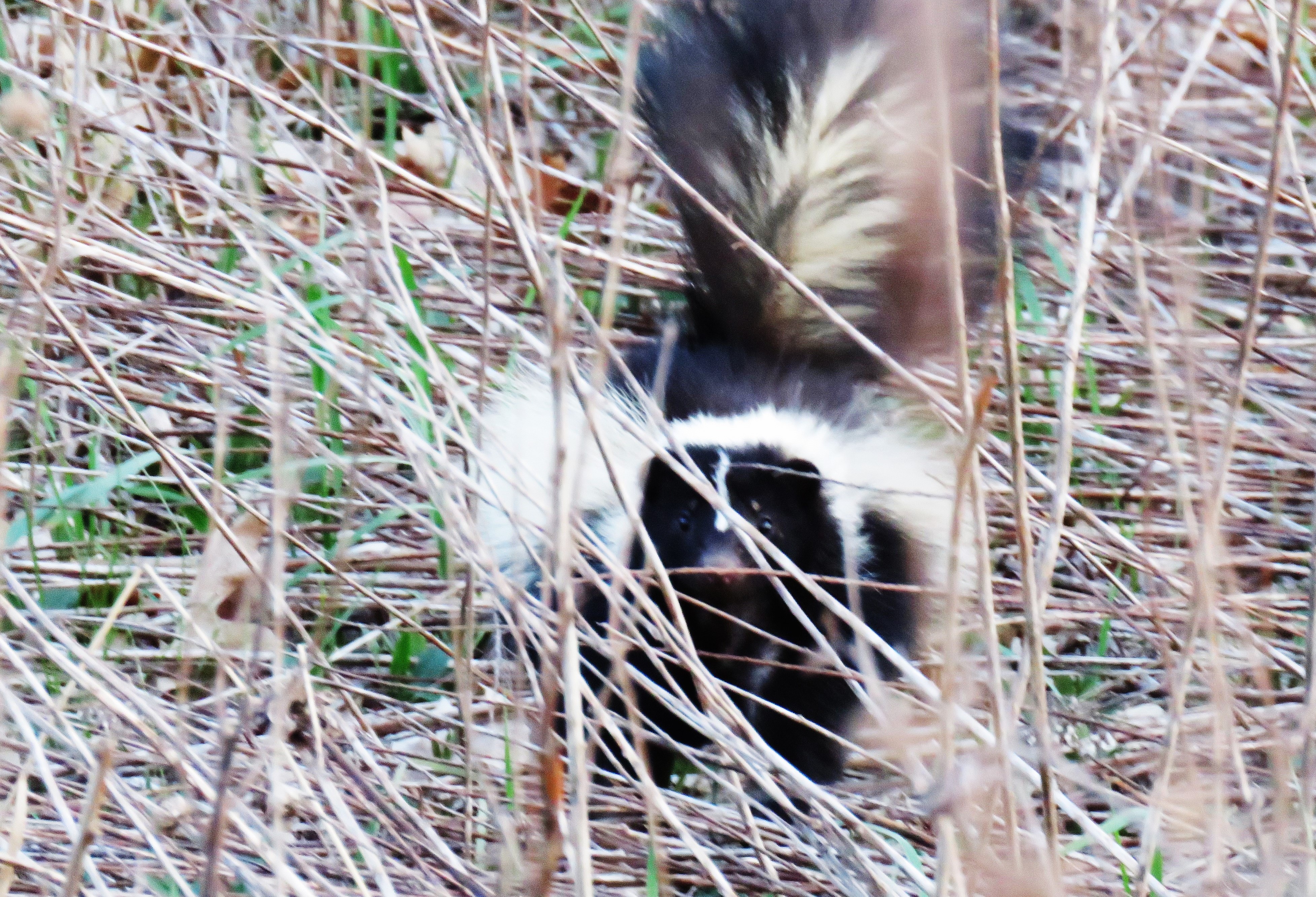 I am not in the least concerned about the skunks that share my landscape. I welcome their presence. They are not aggressive, they try to avoid me, just as I usually try to avoid them and one aspect of their dining habit is to my advantage. My biggest wildlife fear is not some toothy creature “lurking” in the dark woods, but yellow jackets nesting underground. When their nests are disturbed by a lawn mower, or me traipsing around, they can emerge in a stinging fury that can be life-threatening for someone who is highly allergic. However, an underground nest of yellow jackets is a delightful delicacy for the eastern striped skunk, perhaps the most maligned creature of the wilder and not so wild parts of our county. Skunks feast on the larvae and adult yellow jackets with apparent immunity after digging up their nests, and that’s just fine with me. 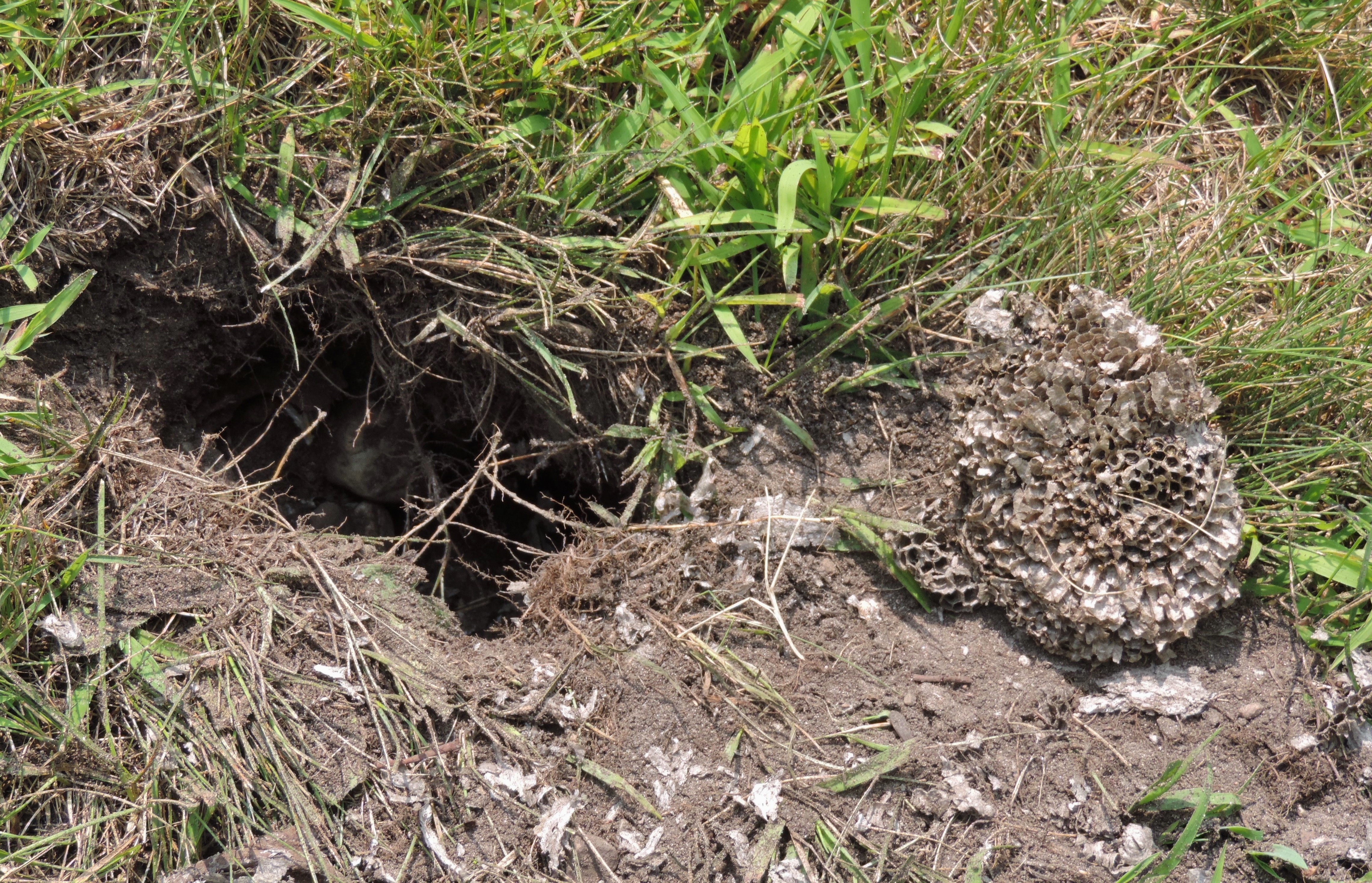 5 thoughts on “Winter Warmth Ends the Slumber of Skunks”