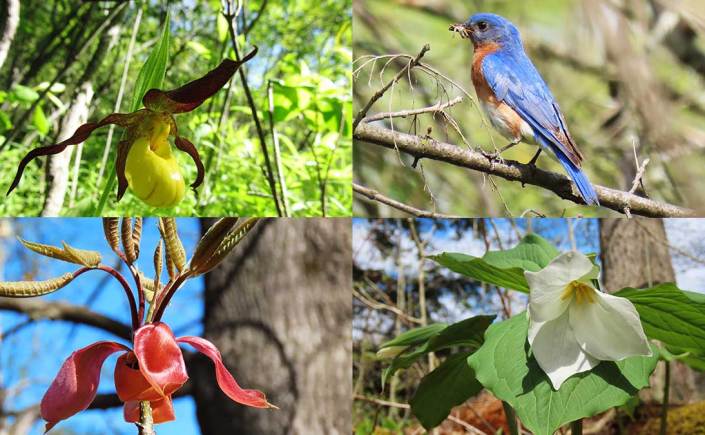 “Live in each season as it passes; breathe the air, drink the drink, taste the fruit, and resign yourself to the influence of each.” – Henry David Thoreau The Journal, 1837-1861 (Thoreau, 2009)

Nature’s way springs to life in May with greening of the woodlands, the blooming of wildflowers, bird song at sunrise, and delightfully longer hours of daylight. It’s the month that not just every naturally curious child, but every adult, should embrace the joys of nature’s way. May is also a month of surprising finds and totally unexpected encounters in wetlands, woodlands, and along our trails.

I had such an encounter earlier this month along the Manistee River Trail near Cadillac, Michigan. An early-morning riverside trek led first to a photo capture of an almost hidden eastern coyote at the edge of the river, most likely on a hunt for goose or duck eggs. Further down the trail, a white trillium on a bluff caught my attention. To photograph its spring grandeur in detail, I laid down on the forest floor. Seconds later, my hiking companion calmly advised me a snake was slithering out from partially underneath me and was inches from my face. As I wiggled backward and repositioned myself, the colorful eastern hognose snake began flicking its tongue in response to that unknown camera-toting creature. After a few minutes of mutual curiosity, we went our separate ways and I had my inspiration for today’s blog: Wild Moments of May.

May is a much-awaited and marvelous month, and it’s not just because it’s the fruiting season of the magnificent morel mushrooms of Oakland County. It’s the month we know spring really has taken hold, a fact confirmed by Eastern Bluebirds flitting about our fields, incubating their eggs and bringing small soft insects, such as caterpillars, to their hungry hatchlings. My bluebird boxes are the most pleasant distraction during a busy day.

May is the time to let the childlike enthusiasm locked within us free. It’s the time to explore the trails and parks of Oakland County or for that matter, anywhere else in our state. It’s the season for sharing adventures and meandering on our trails and in our parks, wildlands, and nature conservancy lands. May is the season the words of author Gary Snyder serve as a mantra for casual hikers and adventurers everywhere: “The wild requires that we learn the terrain, nod to all the plants and animals and birds, ford the streams and cross the ridges, and tell a good story when we got back home.” The Practice of the Wild (Snyder, 1990).

One need not go far to have good stories to share, for nature’s wonders and subtleties surround us. I’m lucky, I can just walk out my door. Rabbits are everywhere. They nibble on newly-emerged flowers and scurry across lawns and poke up their heads in wild meadows. Red-tailed Hawks take note of that easy prey, as do Great Horned Owls and red foxes who need to bring dinner home for their young pups. A Brandon Township resident shared her fox images of a mom fox leading a pup across her driveway and then pausing in her lawn to look back.

I am an unabashed admirer of marshes, swamps, and bogs, and once again, I was rewarded by sloshing slowly and quietly in the wet meadow that abuts my swamp. Yellow lady slippers, a native wild orchid, made a stunning early emergence once again this year. I flattened myself on the saturated soil for a photo and this time, unlike the situation with my Manistee River trillium photo, I did not lie down on a snake. It was probably just as well, for I was in Massasauga Rattlesnake habitat. However, that prone position rewarded me with a clear view of my favorite ambush hunter of the amphibian world, a large American bullfrog. The bullfrog remained motionless in the weedy shallows, waiting for a meal to swim, fly, or crawl into range. That wary predator may become prey, for it was very near where I noticed a Great Egret a few days earlier. As I stood to leave, I discovered another very common sight of May, an eastern painted turtle positioned on a log to catch the warmth of the morning sun.

Bidding the swamp goodbye, I meandered uphill along the edge of my wooded trail and unknowingly startled a white-tailed deer that leapt across the pathway and into a thicket near shagbark hickory trees. The timing of the deer was just perfect, for it drew my attention to a short-lived phenomenon of nature, perhaps one of the most eye-catching and short-lived features of any native tree. When the rather prominent terminal buds (buds that are located at the end of the twig) of shagbark hickory open, they expose brilliant pinkish-red bud scales that curl back like a flower, revealing newly-emerging unfolding inner leaves. These bud scales are often confused with flower petals, which they are not.

Jack-in-the-pulpits may not be the most colorful woodland flowers of Oakland County, but these easily-identified flowers of the forest are full of surprises. A small cluster of Jack-in-the-pulpits had emerged in the dappled light, beneath the shadow of the shagbark hickory trees. They seemed to have almost doubled in size in the past few days, after rain that was followed by warmth. Some are male and some are female, and these intriguing plants have the ability to change their sex every few years, meaning that this spring’s Jack might be next spring’s Jacqueline or vice-versa. That sex-selection strategy depends on how much energy is stored in their underground stem, known as a bulbous. The more stored energy, the more chance it will emerge as a female in the spring. A casual look at the plant exposes their gender if you know what to look for. Female plants have two leaves, each divided into three leaflets that rise above the curved “pulpit.” Male flowers have a single leaf, divided into three leaflets.

The arrival of May produced a flurry of sightings of Rose-breasted Grosbeaks in the woods and at feeders all across Oakland County. The adult males are stunning with a brilliant red chevron that extends from the middle of the breast up to their black throats. When not using their enormous beaks to crack open sunflower seeds at bird feeders, they forage for food among foliage which often includes newly-emerged insects captured in flight.

Baltimore Orioles appeared across the county in large numbers in the middle days of May. I hung sliced oranges in my arbor to entice them, and finally, a male Baltimore Oriole was lured in by the tempting treats. Female orioles are more subtle in their attire, but the flashy males with their flame-orange and black colorations draw the attention of nature lovers everywhere. I was beginning to think Ruby-throated Hummingbirds were not going to appear, but just as the second week of May came to a close, a female Ruby-throated Hummingbird alighted on my glass nectar feeder, just as it was illuminated with a soft glow created by the setting sun.

The wild moments of May await you. A quiet woodland or trail walk of solitude or with a friend is never likely to disappoint you. Perhaps make this weekend your time to follow the nature-embracing words of William Wordsworth, “Come forth into the light of things. Let nature be your teacher.” Lyrical Ballads (1798, Wordsworth and Coleridge)

4 thoughts on “Wild Moments of May”