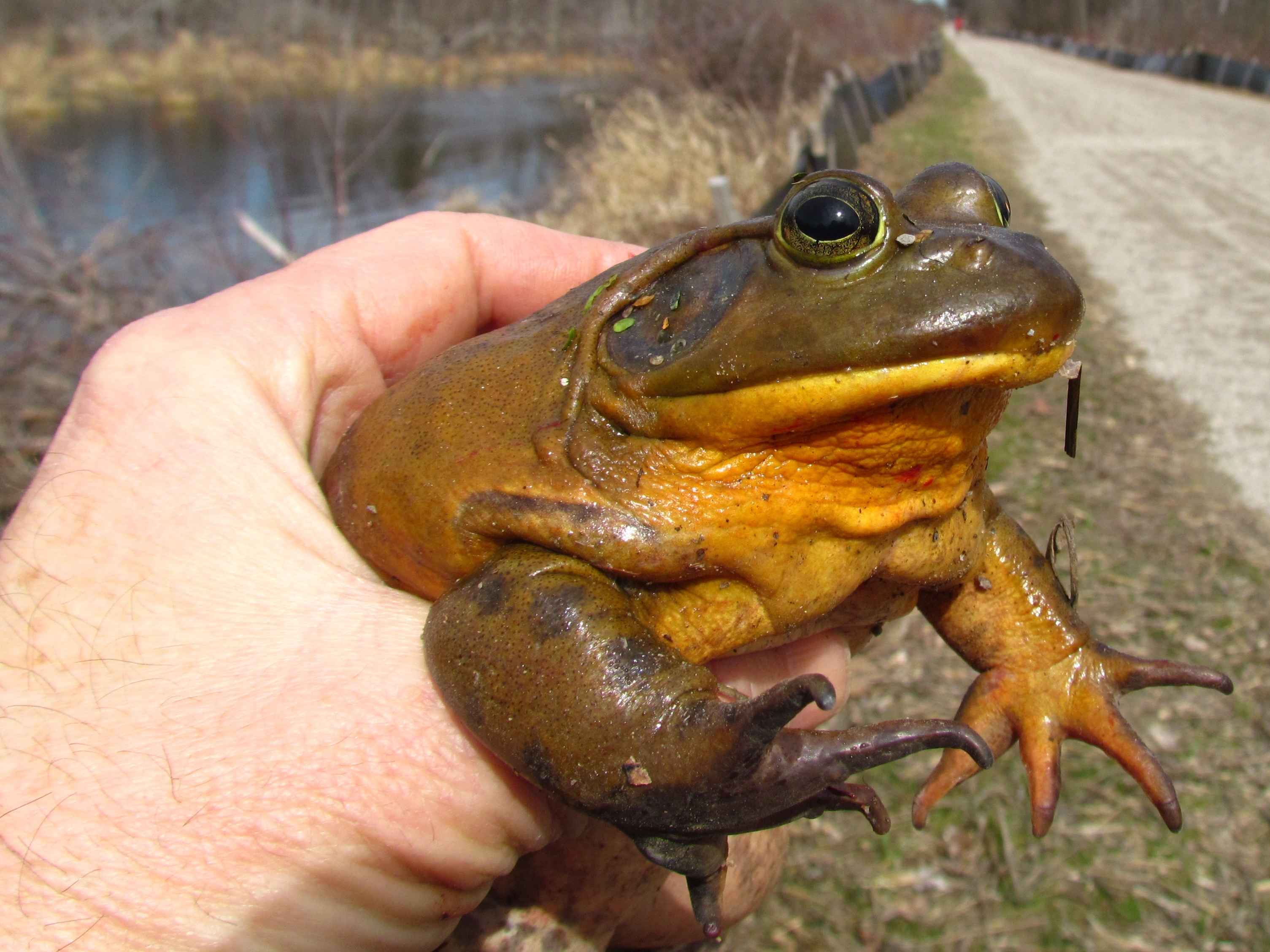 The American bullfrog (Lithobates catesbeianus) is the largest frog species of Oakland County, or for that matter anywhere in North America. Some specimens weigh over a pound and may be 10 inches long. They are a meaty mouthful for many predators and a slippery handful for a naturalist. Several years ago I encountered a Goliath of a bullfrog along the West Bloomfield Trail, a beauty of a beast, blocked from its wetland by construction screening. After a quick photo shoot, I carried him to freedom and have been a fan of these beauties ever since. 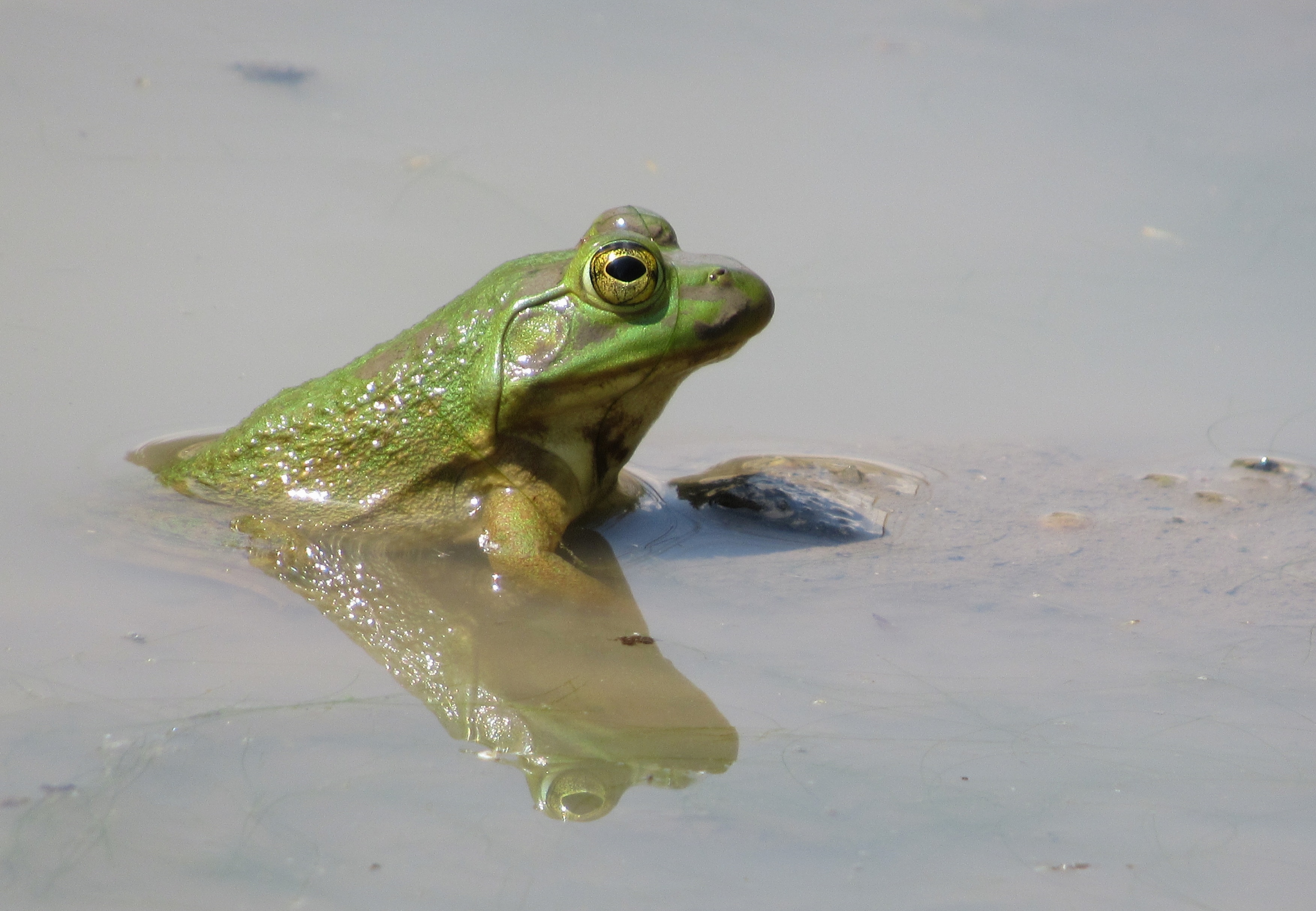 The sultry days of summer are a season of plenty for American bullfrogs. They settle into their gluttonous routine in the duckweed-coated ponds, or the quiet backwaters of rivers, and wait to ambush prey that pass by. Although usually well-hidden, the bullfrogs resonating sound gives them away. Their slow paced bellow of “Jug-of–Rum,”  “Jug-of-Rum,” with a long pause between each “Jug-of-Rum,” may be heard both day and night. On a windless night that sound may carry over 1,000 feet.

Dragonflies, beetles, worms, bats, fish, snakes, birds, small turtles, meadow voles and other frogs all fall prey to this opportunist hunter. Bottom line, if it can fit it its mouth, a bullfrog may swallow it. Living a long life is not always guarantied for this ‘monster’ frog. Their habitat shrinks as construction encroaches on wetlands. The list of creatures that relish this amphibian is long and includes: raccoons, opossums, barred owls, great blue herons, snapping turtles, northern water snakes, bigger bullfrogs and humans. 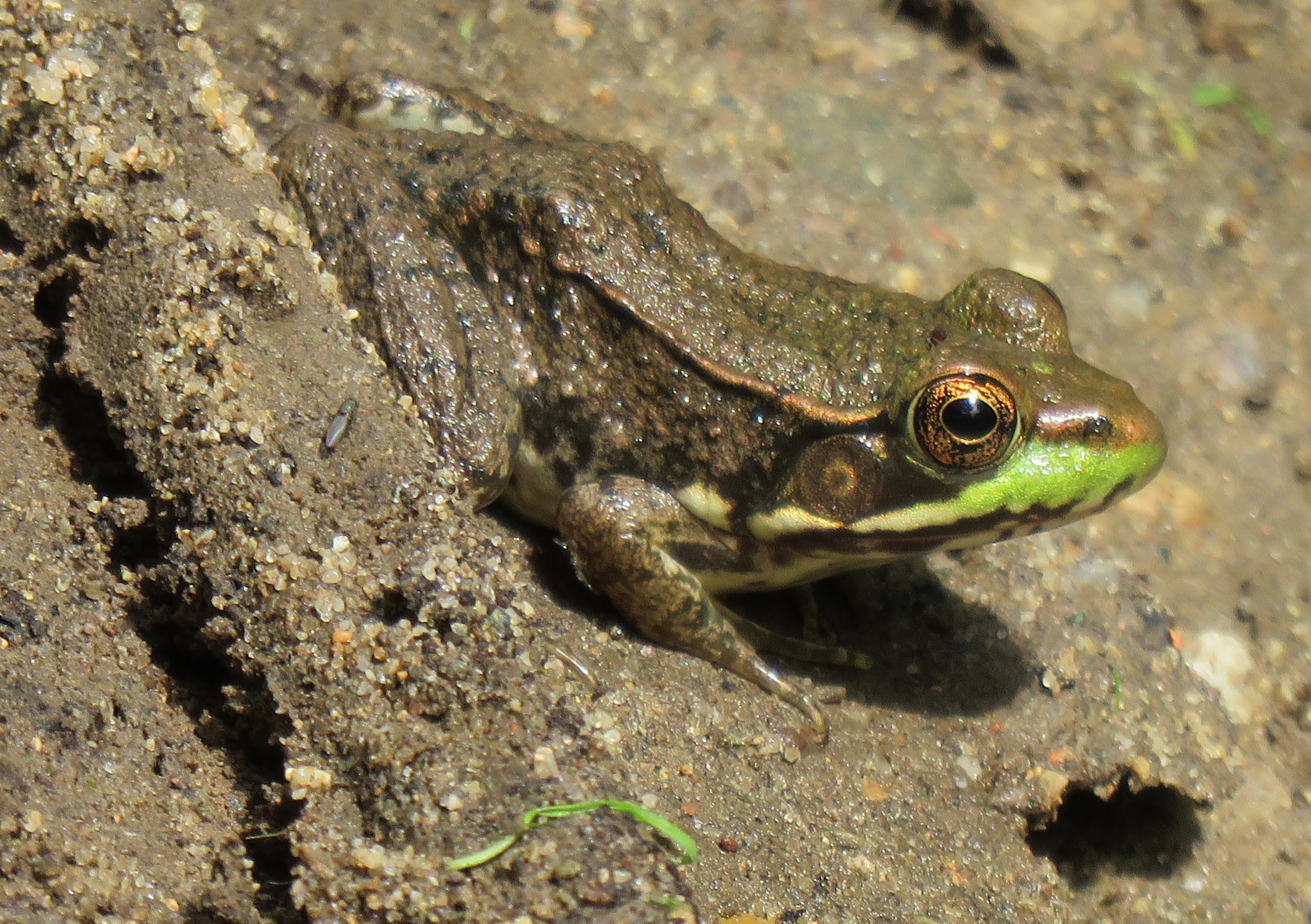 The Green Frog (Lithobates clamitans) is more common than the bullfrog and adapts well to our great variety of wetlands from the urban ponds of Pontiac, Royal Oak and Southfield, to the expansive parks of the northern reaches of our county. Unlike bullfrogs that almost always lurk in water, green frogs usually wait in stealth mode at the edge.

A quiet hike at Stony Creek Metropark, Rose Oaks County Park or the Bald Mountain State Recreation Area will almost always reveal opportunist green frogs waiting to ambush bugs and other small creatures. If you remain motionless long enough, and become one with the landscape, photo opportunities abound; but if the frog feels the vibration of human feet, it’s gone with a lightning-fast splash. 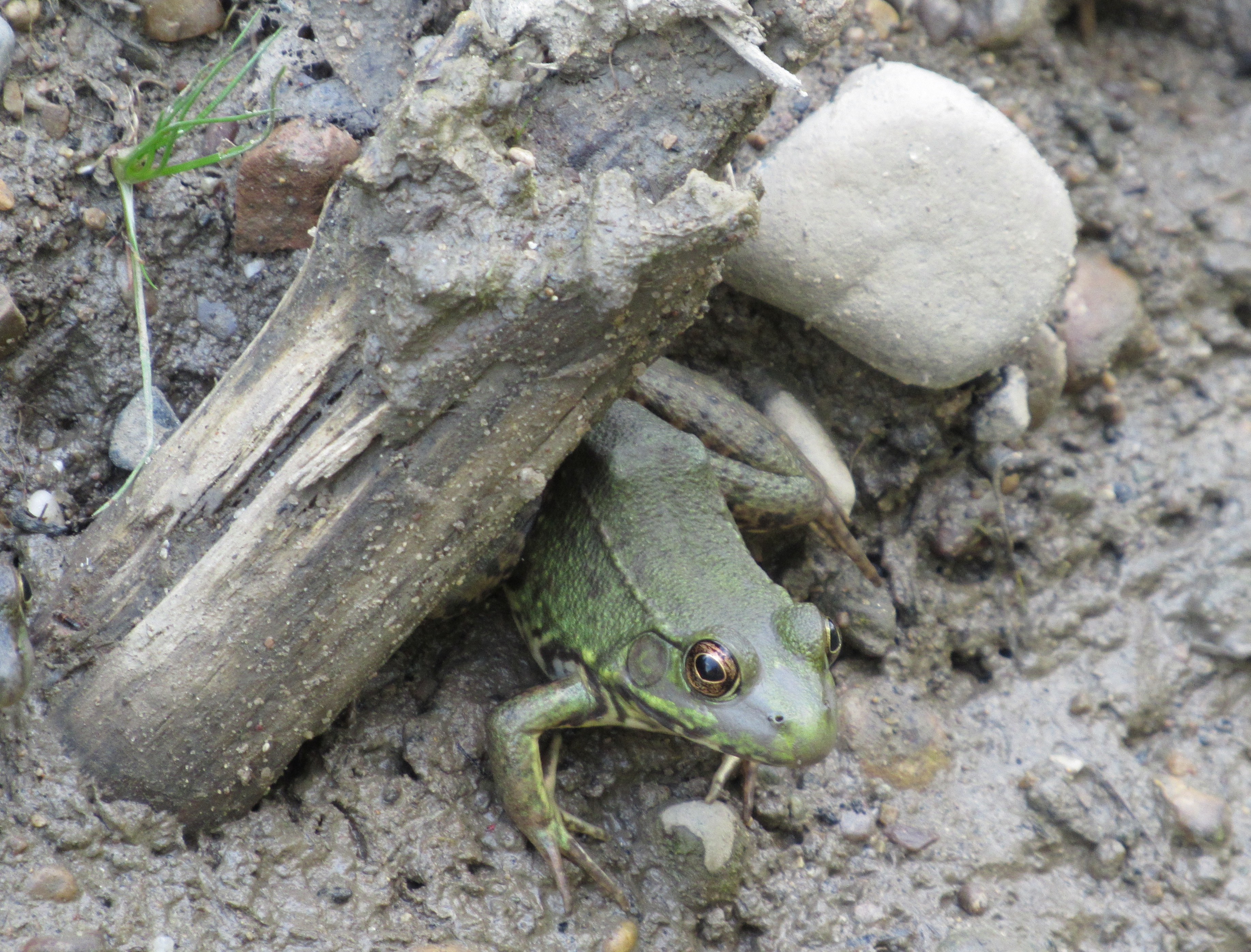 The Green Frog’s song bears no resemblance to the deep resonating melody of the bullfrog. Their song has been described rather accurately as the plucking sound of banjo strings. Everything that eats bullfrogs will also swallow green frogs, and during the heat of the summer American Egrets, Great Blue Herons and even Sandhill Cranes practice their stalk, grab and swallow routine. 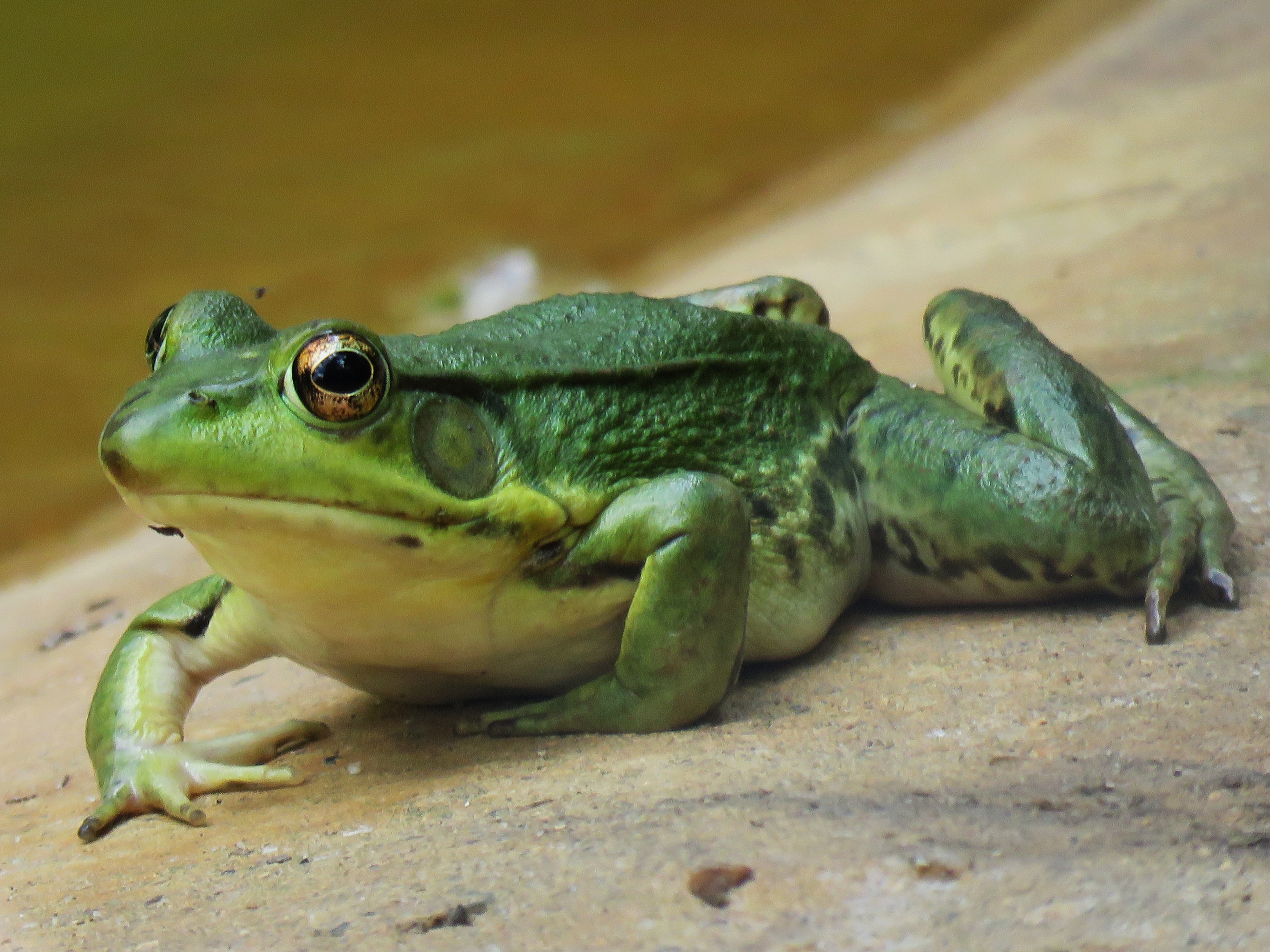 So how does one visually tell these species apart when green frogs may be brownish or bronze and some green frogs are larger than small bullfrogs? It’s easy! The answer is in the “glandular fold” and its placement relative to the “tympanum”. Translation, the glandular folds are the two raised ridges along the sides of the frog. The tympanum is the large circle just behind the eye that transfers sound waves to the hidden inner ear and keeps debris and water out. If the glandular fold runs straight down the back of the frog, it’s a green frog, but if it starts just behind the eye and wraps around the backside of the tympanum, and ends at the forelegs, you have the American Bullfrog, the Goliath of the Wilder Side of Oakland County.

7 thoughts on “Bullfrogs and Green Frogs: Ambush Hunters of the Wetlands”