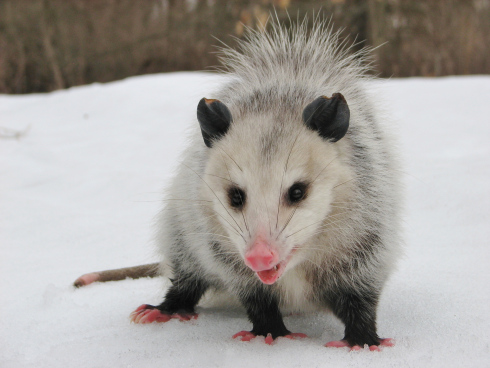 What animal lived during the age of the dinosaurs, gives birth 13 days after a honeymoon, has thumbs on their hind feet and is falsely accused of being, a big ugly rat? If you guessed Didelphis virginiana, the Virginia opossum, you are right. The opossum is the only marsupial found in North America; Oakland County is home for hundreds, if not thousands of these amazing omnivores. The Virginia Opossum has fifty teeth (the most of any mammal) and feeds on almost anything and everything. They will hunt, kill and eat mice and rats and relish rotting road kill and crunchy cockroaches. Bird eggs, berries, beetles, frogs, fish and fruits of all sorts are also on the delicacy list. Don’t forget to add snakes, slugs and snails too. To put it simply, if it produces a scent, the opossum will eat it. 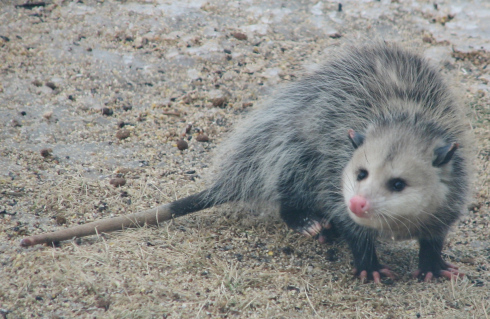 During winter, an overloaded bird-feeder, pet food left outside and exposed trash all scream to the local opossum population, “Come feast!”  They accept the invitation and come to dine. Homeowners may think they have acquired the world’s biggest rat when they see opossums at their bird feeders on sunny, winter days. Opossums often feed in daylight hours, for they are very susceptible to extreme cold and frostbite. Many cold-climate opossums have damaged ears and frost nipped tails so it’s safer to bask in a bit of relative warmth rather than to follow their nocturnal ways. Scrounging for food at night during the bitter cold is also dangerous because that’s when coyotes hunt. Before the sun sets each night, these quickly adapting marsupials retreat and curl up in hollow logs, woodchuck dens and under sheds and backyard decks. 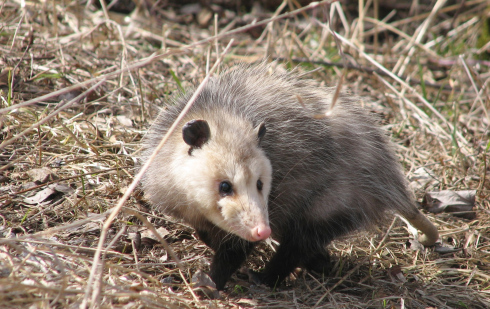 Opossums have a pouch in which they carry their honey-bee sized young and are related to kangaroos and other marsupials found in Australia. The opossums that live in the urban and rural areas of Oakland County are descendants of those that not that long ago were found only in southeastern U.S and Central America. In the past century, their range has expanded both west and well north all the way into Michigan. They are excellent climbers and can wrap their long prehensile tails around tree limbs for balance. As nature-savvy first graders know, when threatened, opossums flop over, close their eyes, open their mouth and drool a bit as they play possum. Sometimes it works and the inquisitive coyote or fox walks away, and other times, they end up as dinner. Sadly for opossums, this technique never works when crossing a roadway. 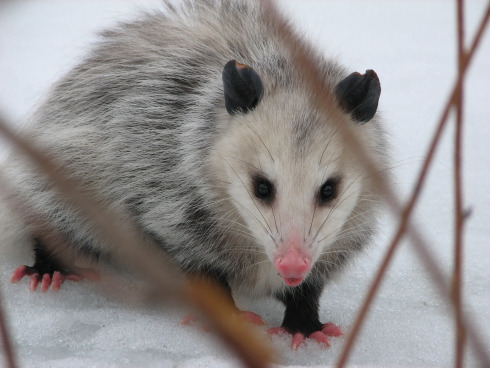 Winter is the perfect season to keep an eye out for opossums under bird feeders and on sunny woodland trails. Their footprints are unmistakable due to the spacing of their toes. Opossums have opposable thumbs on their hind feet which help them grip branches and climb. They are the only non-primates with opposable thumbs. The front paw prints resemble tiny five pointed stars—follow the tracks and the secrets of their travels will be revealed. 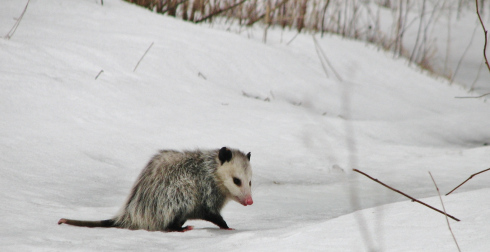