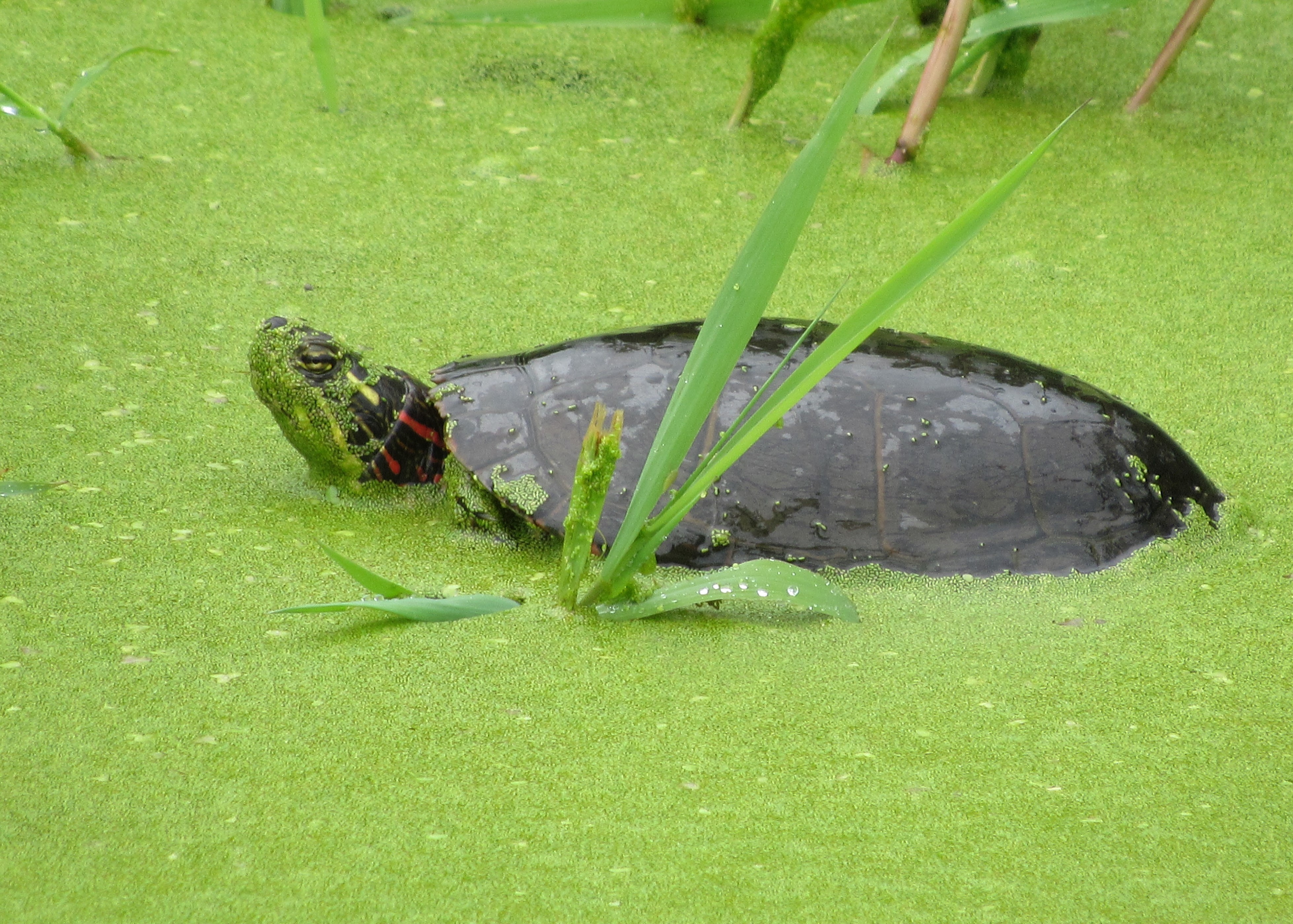 Want to feel like a kid again, with an insatiable sense of discovery? Try wandering the wetland embracing trails of Oakland County and that just might happen. You may even rediscover the sense of wildness within you, no matter how citified or refined you think you are, or pretend to be. Sometimes we all just need something to stir our memories, slow our fast-paced lives and set us free, at least for a while. For some, it may have been the scent of May lilac blooms or the arrival of the first Ruby-throated Hummingbird. For others, perhaps just a soothing evening walk down to the solitude of a neighborhood pond, with a pause to stare at a bug-eyed frog, to gather thoughts before resuming a parental role. For me, it is often the first sightings of painted turtles basking on logs. What moment refreshes your feeling of childhood wonder? 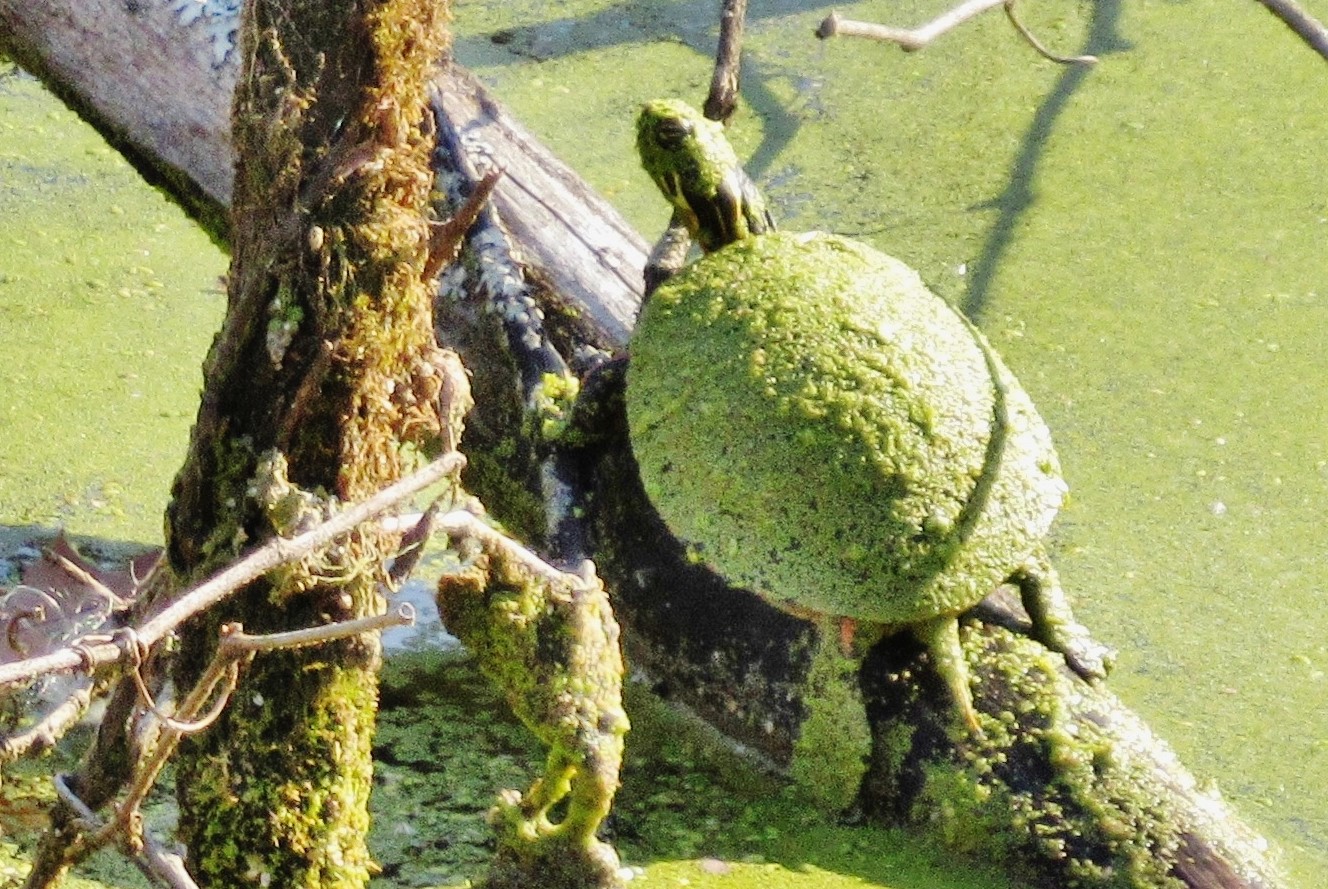 I was about four years old running wild, free and barefoot behind “Grandma’s shack” when I discovered my first painted turtle, a marvelous wild creature at the edge of the forbidden swamp. I caught that creature, and then it peed on me. That first painted turtle (Chrysemys picta) encounter stirred my spirit of adventure and hunt for nature’s wildness. That spirit thrives today. I also discovered another life lesson: one does not have to travel far to find wild things. Today, more than five decades later, I’m happy I turned into a turtle-loving, tree-hugger: a man hopelessly addicted to nature’s way. But this ramble is not really about me, it’s about painted turtles and the joy of nature exploration. With the heat of the summer already upon us, painted turtles may be the perfect first chapter to entice your children or grandchildren into a world of nature discovery. Turtles and other wild things offer more valuable life lessons than learning to swipe fingers across an iPad, or staring down at other self-imposed electronic tethers that impede carefree nature exploration and blind us to the wonders of the natural world. 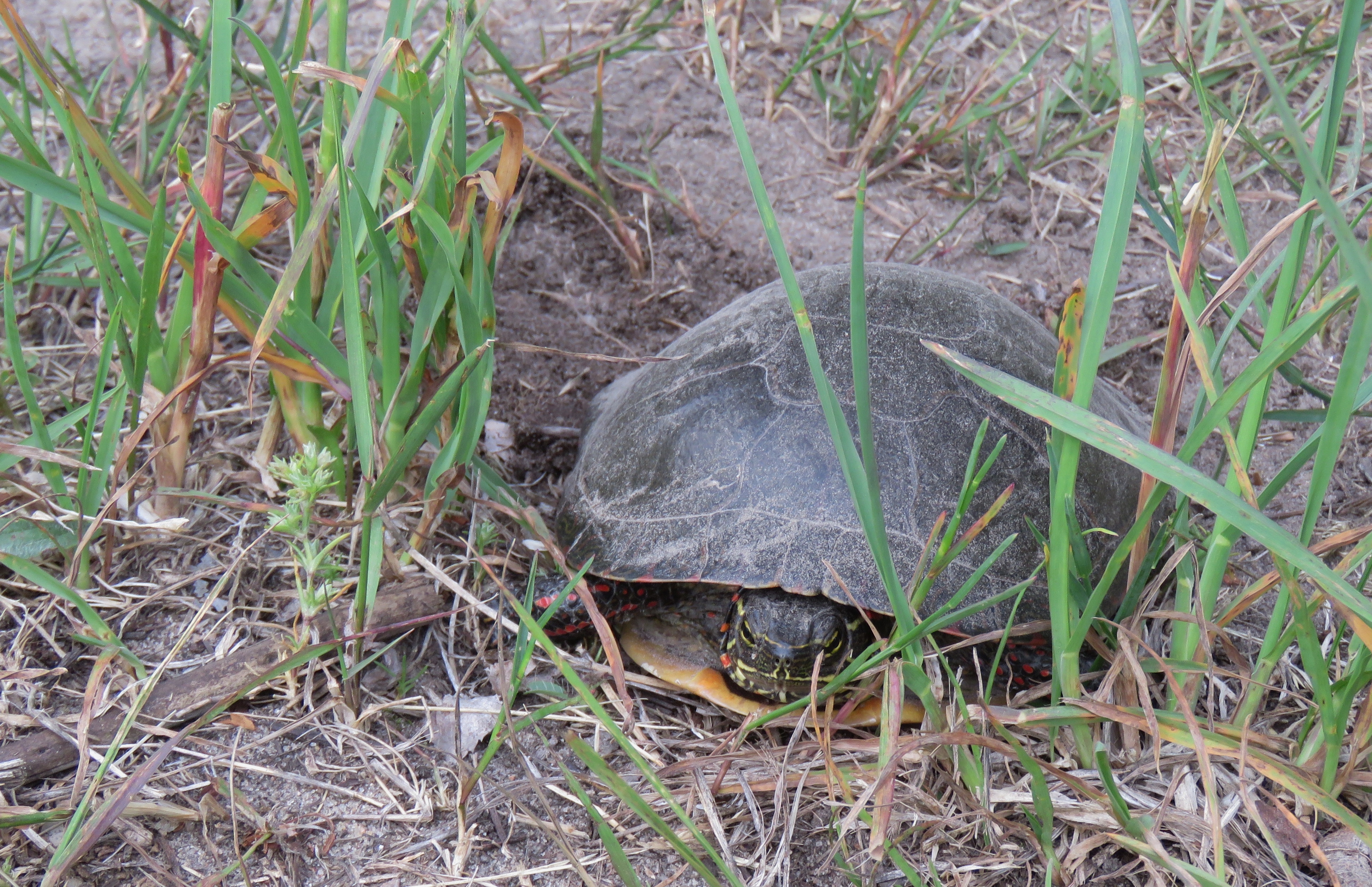 Turtle breeding season has been under way since late May, but some females are still crawling ashore for egg laying. If you want to instill nature appreciation in kids, or perhaps adult trail companions, try sharing exciting information on this easy to find species and you just might see some new enthusiasm for all wild things, and nature’s way, in their eyes. That may lead to a life that embraces science, and natural history: a life you can be proud of. A life we all need. 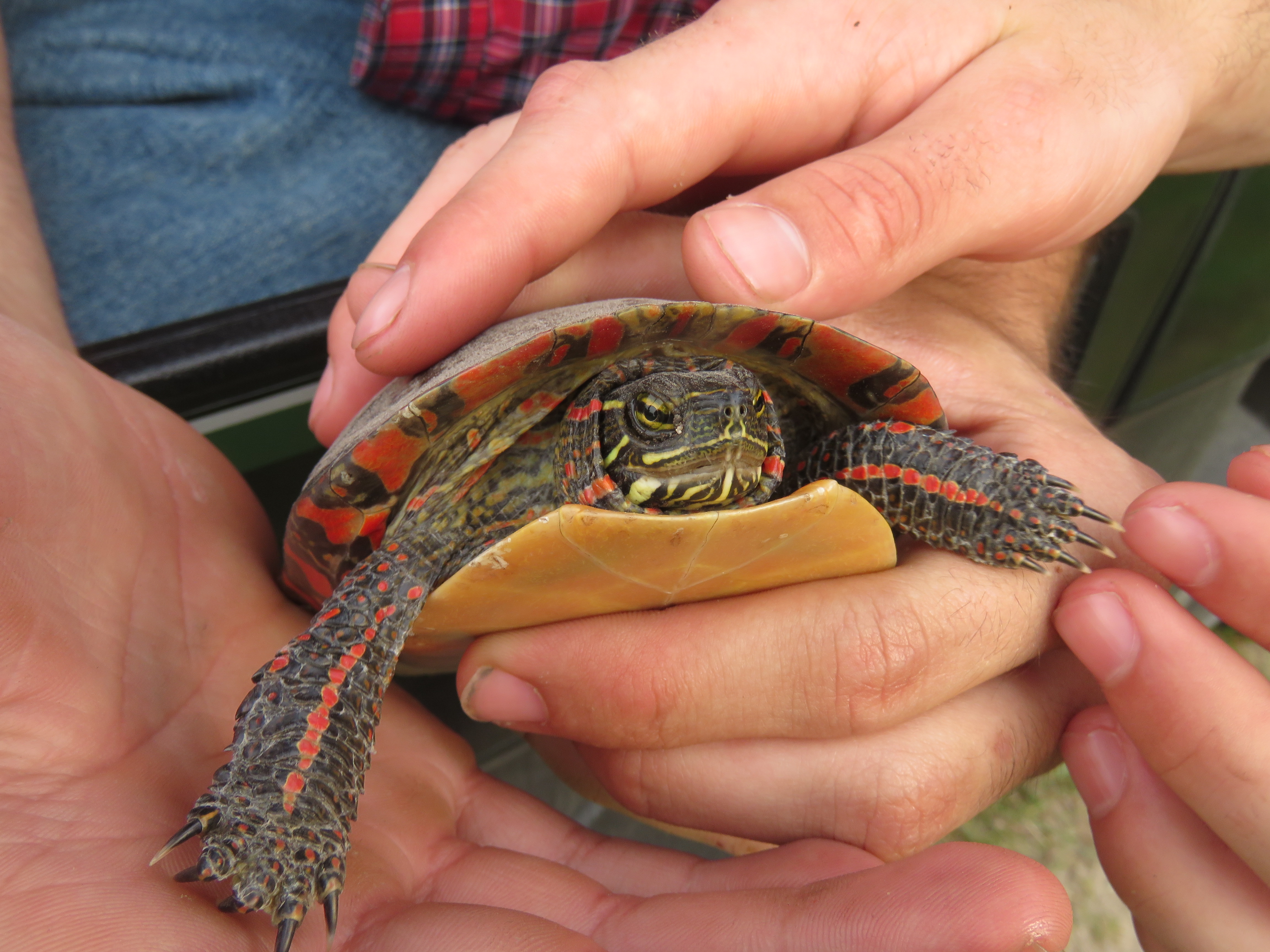 Facts add to appreciation, so here are some basics starting with the name, Painted Turtle. It does not take much to decipher the reason behind the name. Brilliant colors mark parts of the neck, head and shell. The neck and head have bold yellow stripes and so do the legs, a body part of turtles that often seem to go unnoticed when it comes to identification time. The plastron is usually a yellow hue. Most of us know the plastron as the ‘bottom shell.’ The top shell is the carapace. Field guides usually omit that the plastron of the male is slightly concave, making it easier to mount the female when mating. The male also has long front claws. Why? Keep reading. 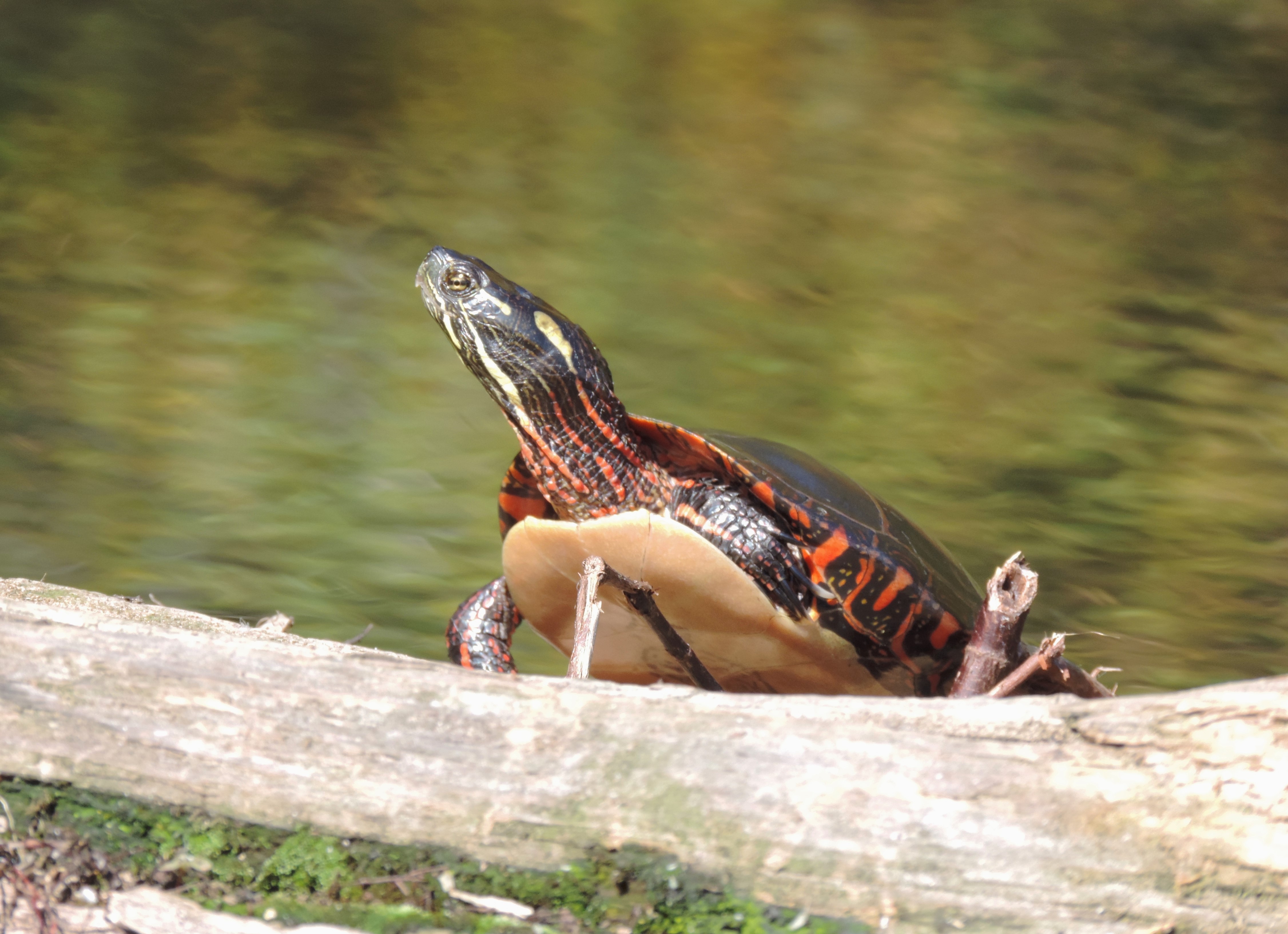 Painted turtles begin to think about romance shortly after emerging from hibernation. The male slowly pursues the turtle of his dreams in a slow-speed underwater chase. When he catches up with her, he swims in front of her to face her. He can’t sweet talk her with promises of happiness, or bring chocolate and flowers, so what’s a turtle to do? Remember those long claws mentioned earlier? They come in handy now. Romeo reaches out to touch her neck and face to see if she is receptive. She thinks it over. Five seconds. Ten Seconds. Then a bit more. If she feels stirred into romance she responds by touching his forelegs. If all goes as nature intended, they sink to the privacy of the bottom of the pond.

After mating, the female crawls ashore and digs a nest. Lucky females find a good spot just a few yards from the water, others travel further inland and must cross roads. That often ends poorly. After the eggs are deposited, she covers them with soil and never returns. Incubation averages about 75 days, but many nests have the astounding failure rate of 100%. Raccoons relish the eggs, and skunks and coyotes will also take advantage of the all you can eat slightly sandy egg buffet. The sex of the young is determined by the soil temperature of the underground nest; cooler temperatures favor males, warmer temperatures favor females. Nature’s way is variable, but in Oakland County the hatching period is usually late August to early September. Some turtles from late clutches may overwinter in the nest, emerging in spring. Many of those late turtles become meals for meat eaters without ever seeing the light of day. Regardless of emerging time from the nest, hatchlings instinctively seek out the relative security of water, but some of those turtles scurrying to our abundant lakes fall prey to Great Blue Herons, Great Egrets and northern water snakes or encounter snapping turtles as soon as they enter.

The painted turtle is most at home along slow-moving streams, wet meadows, ponds and lakeshore that offer a muddy bottom rich with vegetation, making much of Oakland County perfect habitat. Many of those locations are trailside, also making them easy to spot if the approach is stealthy. Painted turtles are omnivorous and feed under water on aquatic plants, aquatic insects, crayfish, small fish, carrion and tadpoles. Turtles are also “cold-blooded”, meaning they need to regulate their body temperature from an external source. In the case of the painted turtle, that source is usually direct sunlight or resting on a warm rock. Basking sites are critical for survival, and they often bask in rows lined up on logs, the river bank, the edge of a pond, or partially submerged boulders to capture maximum sunlight. As the sun’s position changes, they move to keep up with the sun. Keep that fact in mind when sharing turtle sightings with kids. The response may be “Too cool!” But as the day heats up, the direct sunlight on the turtle has the turtle thinking “Too hot!” and with a series of slight kerplunks, they all slip back into the water leaving barely a ripple. 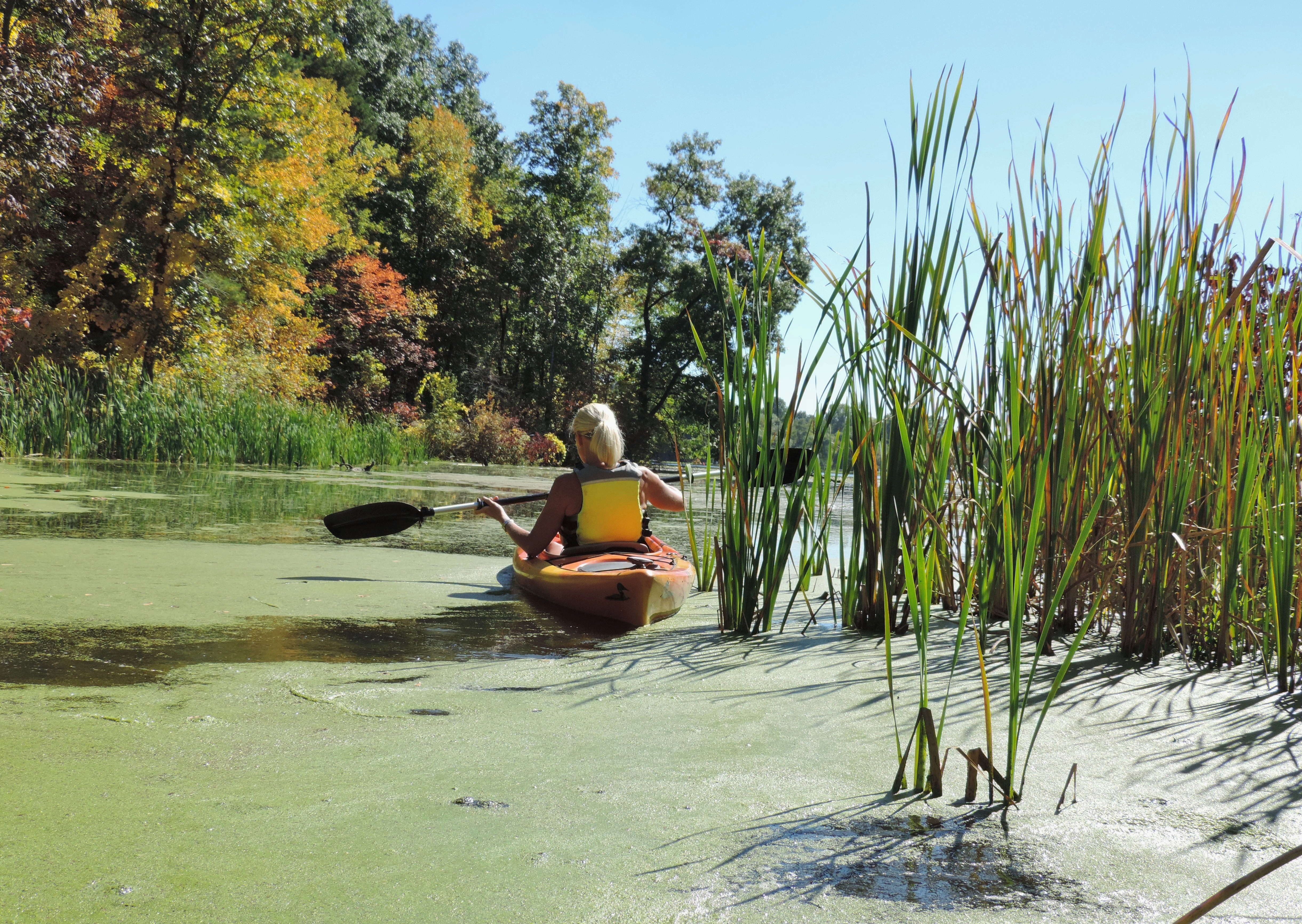 If you decide to help a turtle cross a road, think about the turtle before you act and follow the lead of the turtle. Move them to the side of the road they were heading to, not to where they came from. Unlike moving a snapping turtle that may repay an act of concern and kindness with a powerful finger crunching bite, the painted turtle is likely to withdraw into the shell, hiss, and say thanks by peeing on your hand. Why not make this the month to become a kid again and share the wonders of nature on the Wilder Side of Oakland County, but remember the home of a painted turtle is in the wild, not as a prisoner in a home aquarium.