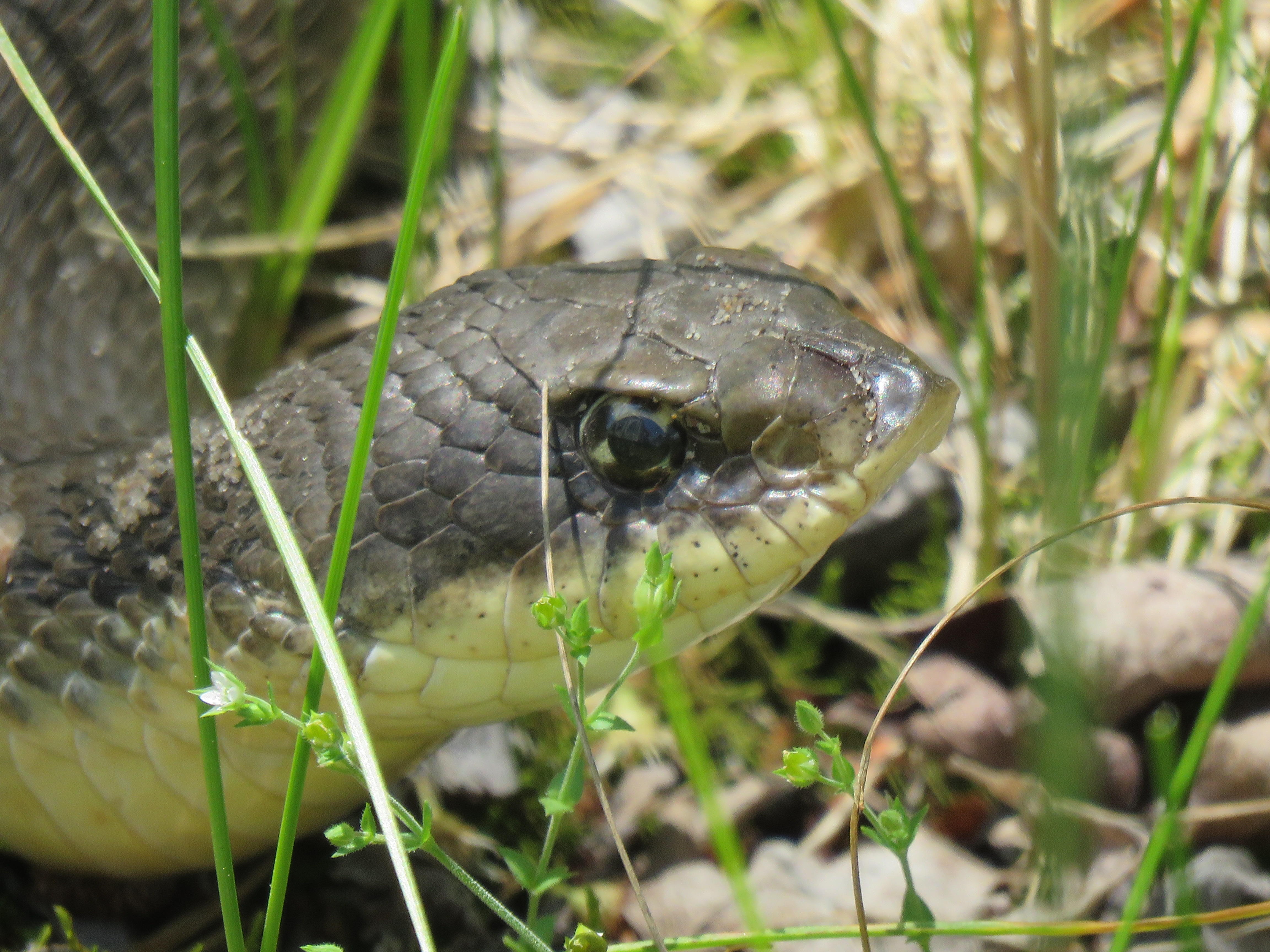 If all snake species that live in Oakland County were entered in a reptilian Academy Awards category, “Best Actor By A Native Snake,” the strange and beautiful eastern hognose snake would win unanimously. 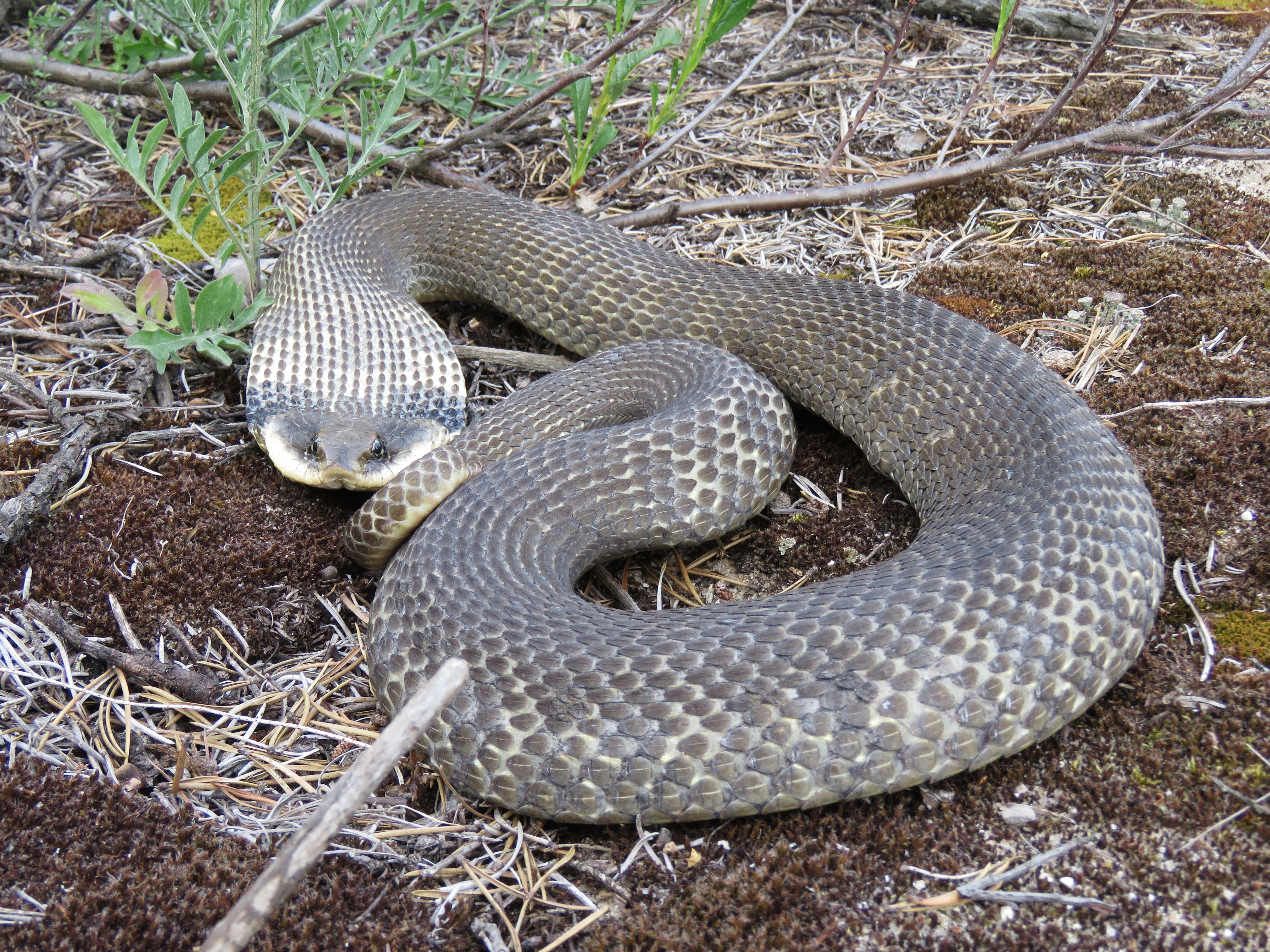 When cornered, or feeling threatened, the eastern hognose snake (Heterodon platirhinos) has the ability to puff up, raise its head and act very fierce, thus its nickname, puff adder. Those who have never encountered a hognose snake and witnessed the dramatic, seemingly choreographed performance may well think they just stumbled upon a cobra. The hognose coils, hisses loudly at the approaching threat, shakes its tail and feigns a strike. If the big bluff fails, and the intruder advances, it’s Academy Award competition time! The hognose then rolls over onto its back, opens its mouth wide, sticks out its tongue, appears to go into convulsions and then suddenly plays dead. If flipped back over by a human, it usually repeats the act, but also raises the performance a notch by vomiting its last meal – perhaps for the sake of drama. It also excretes a foul-smelling musk, opens its mouth gaping wide again, and plays dead for a second time. After playing dead for a few minutes, it cautiously turns over, looks around to see if it is safe, and if the coast is clear, simply slithers away. The Michigan Department of Natural Resources says this about the species’ behavior, “Despite this intimidating behavior, Hognose snakes are harmless to humans.”

Who wouldn’t give it the Best Actor Award? Toads would not. Toads are the preferred entrée of the eastern hognose snake. 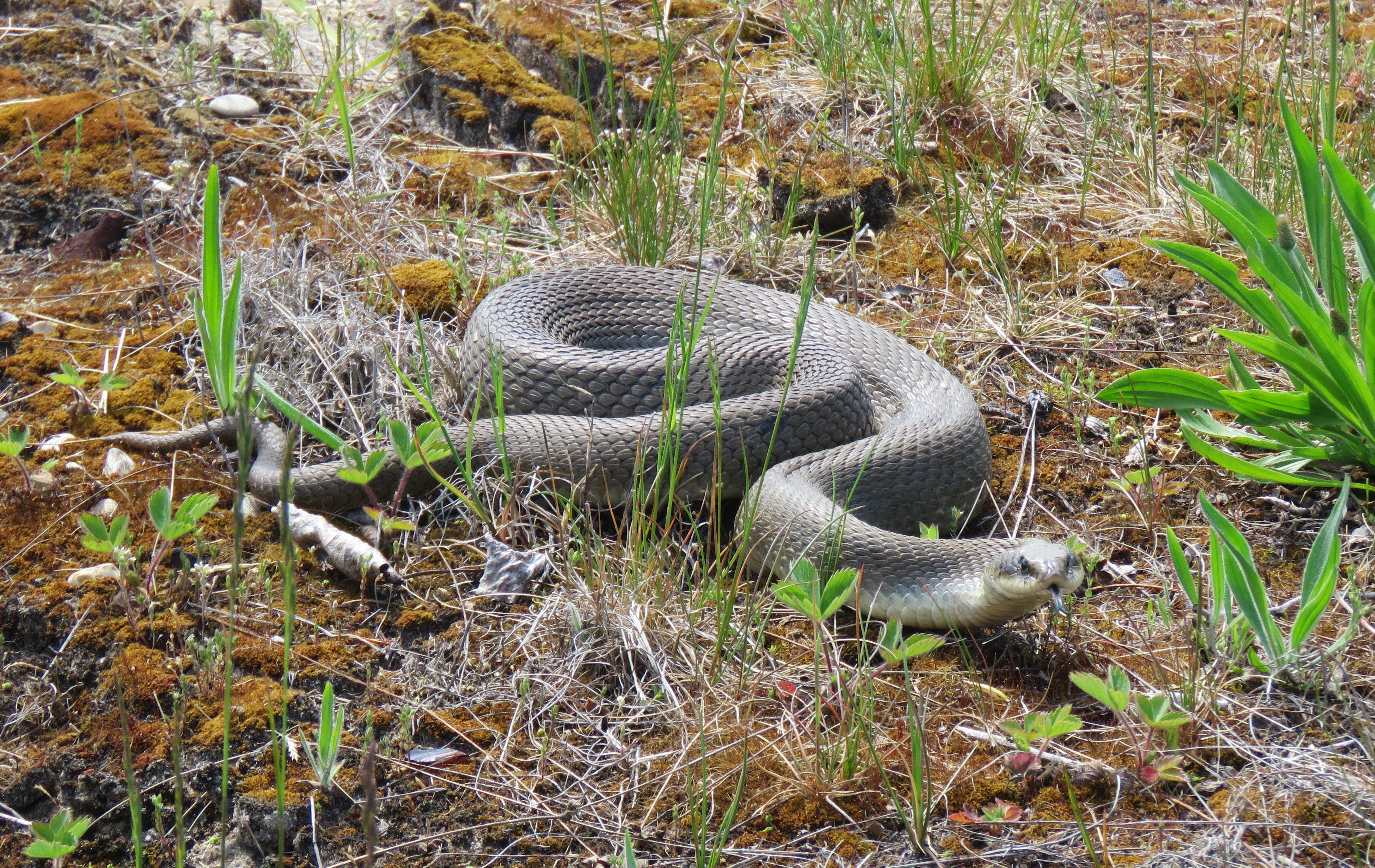 There are many theories as to why the snake feigns death, vomits and plays dead. Some researchers think it’s the ultimate distraction act, with a potential predator focusing on the regurgitated meal, which is usually a toad, giving the snake time to slither away. Regardless of the reason behind this rather effective defense mechanism of the eastern hognose, it’s eye-catching at the least. For those in the know about their behavioral pattern, it can be rather comical. But some birds of prey, and the eastern coyote, will simply call the bluff and snag a meaty meal, for an adult hognose is a hefty snake and can be three feet long. 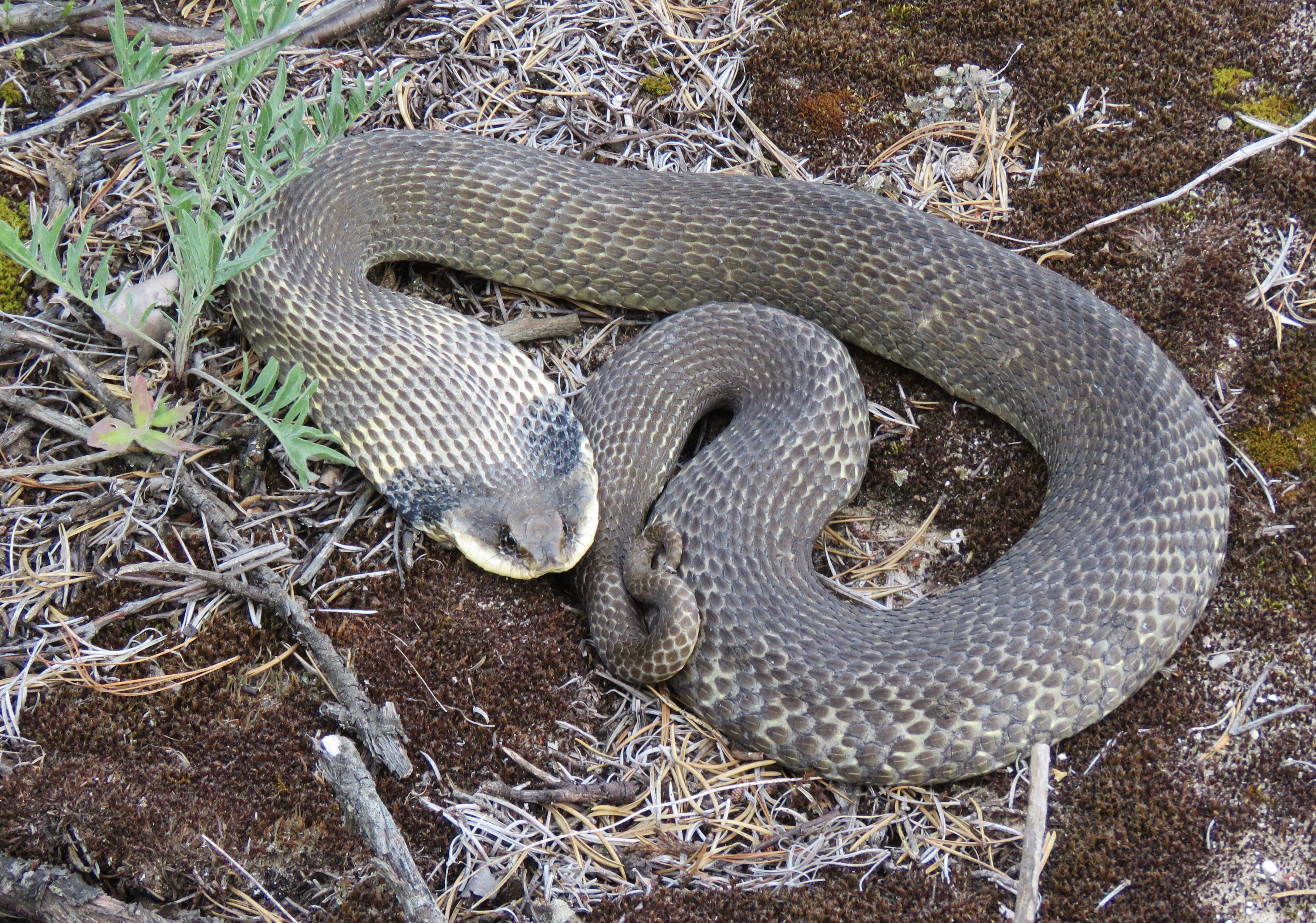 The hognose is very rare in Oakland County, but if an encounter should happen, and the snake felt threatened, it would be a most unforgettable encounter. Might you see a hognose snake one day? Here’s what Jim Harding, a herpetologist at Michigan State University said when I contacted him for their status in Oakland County. “Based on what I’ve heard reported in recent years, I think hognose snakes are only doing reasonably well in a few spots in the northern lower peninsula, plus the southwest, and along the sandy areas and dune woodlands on the west coast of Michigan. They are very rare in Southeast Michigan.” Harding also supplied a great photo of the academy award performance, act two, the feigning death of a hognose snake. The object next to the hognose is a part of regurgitated toad! 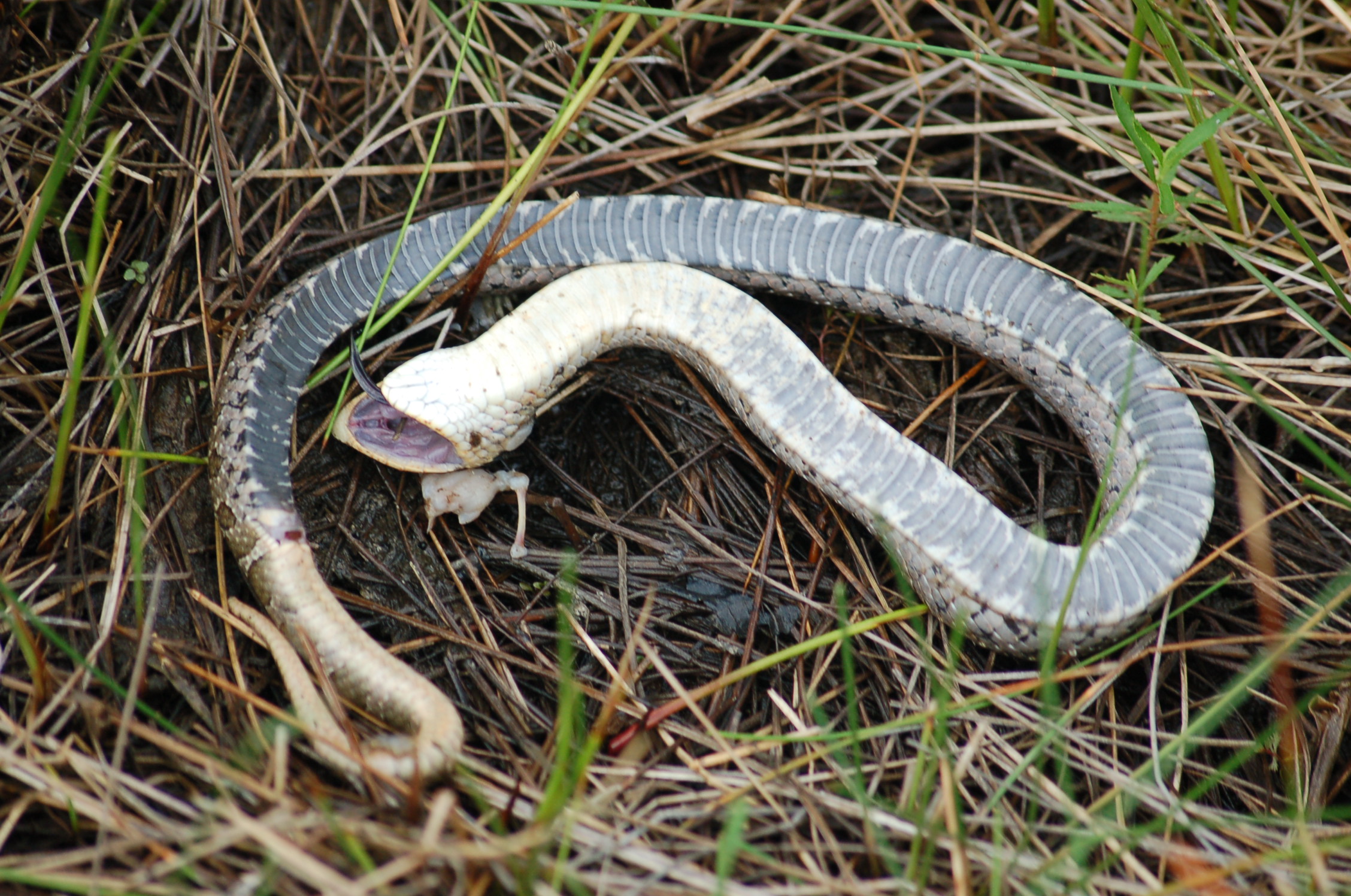 Hognose snakes emerged from hibernation in late April with two things on their minds: finding mates and eating toads. When the American Toad feels threatened and cannot evade the snake, it inhales air and puffs up its body making it harder to swallow. The hognose is rarely deterred and employs its counter methods to continue its attack. The snake’s gaping mouth closes on part of the toad and then it uses its two “fangs” in the back of its mouth to deflate (popping the toad like a balloon) and sedate the toad with a mild venom causing the toad to exhale, relax and be easier to swallow. If toads can’t be found, the hognose snake may settle for frogs, chipmunks, invertebrates and smaller snakes, and even explore the drying up ponds where toads mated in search of trapped tadpoles. 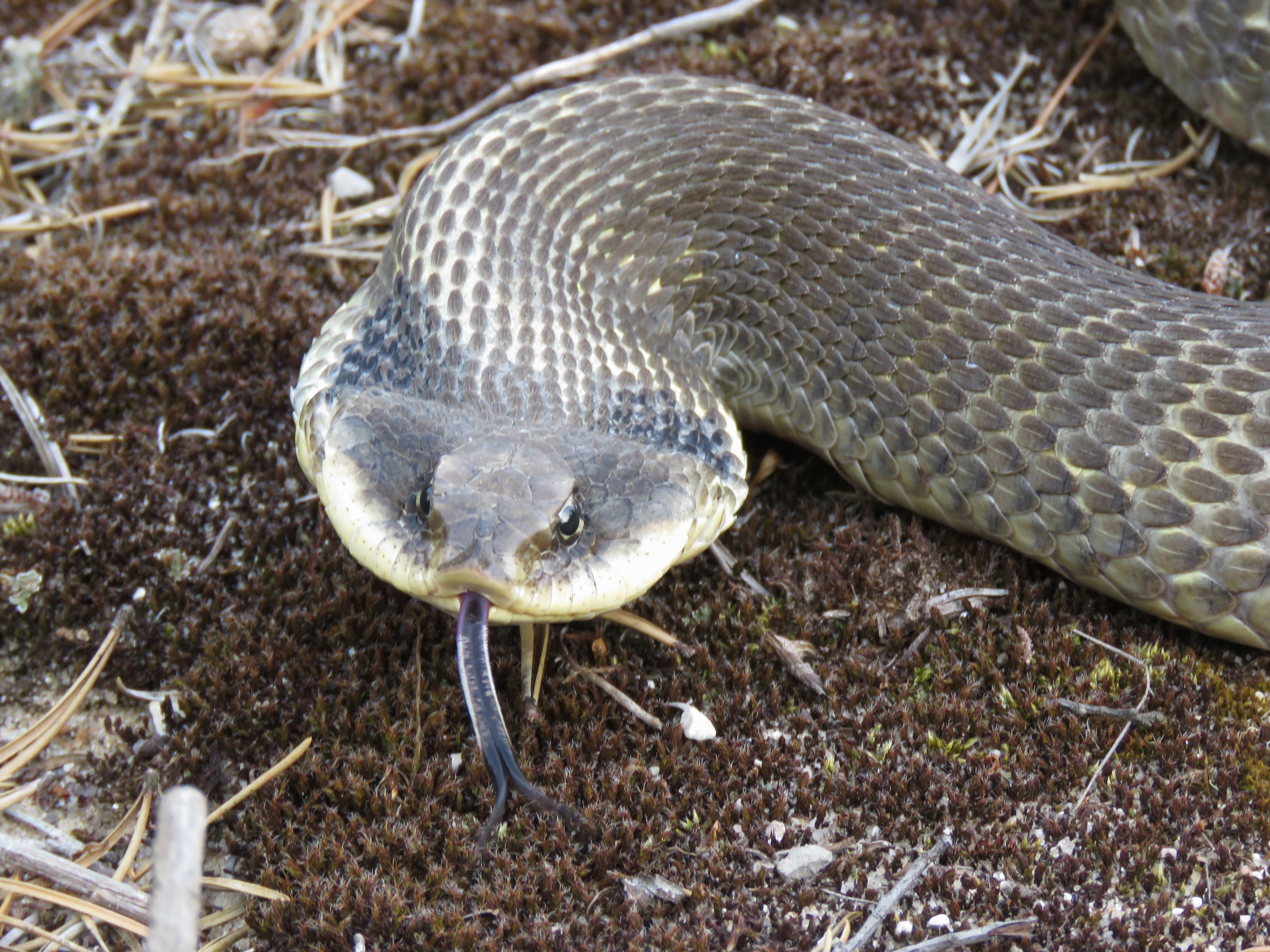 In early summer the females lay anywhere from 4 to over 50 eggs, usually in an underground burrow, but they also may be deposited in moist sandy soil or under debris. Sometimes it’s a burrow that belonged to a small rodent, other times the female digs it over a few days with her snout, which is used much like a shovel. The young begin to hatch 60 days after eggs are laid and have the ability to spread their necks and hiss almost immediately after hatching and coming topside, perhaps practicing for their future Academy Awards. They newly emerged snakes tend to have a grayish color with some black blotches, but as an adult the color variation varies greatly. 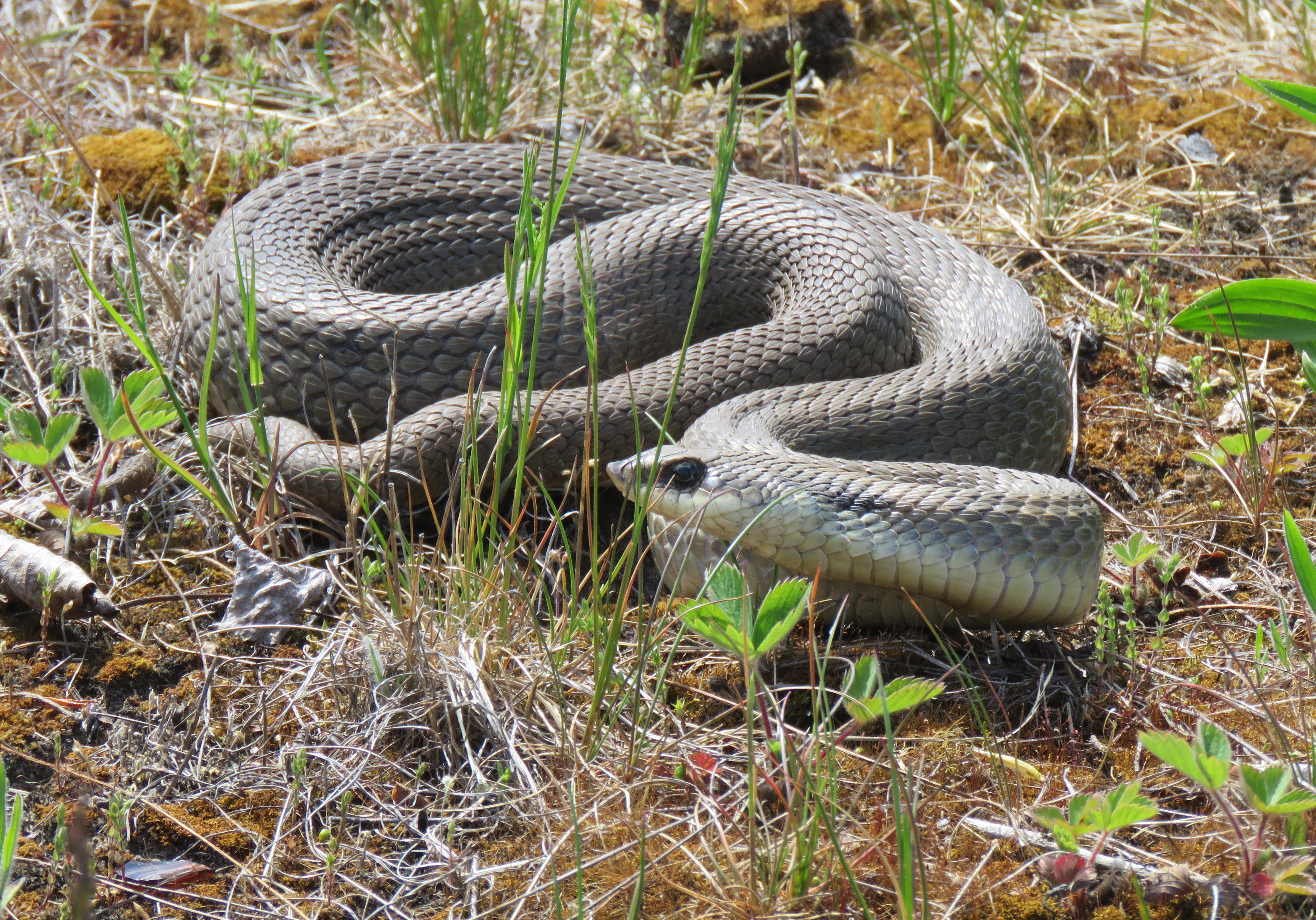 The coloration of the adults is highly variable and can range from almost black to gray, to mottled brownish colors that bear superficial resemblances to other species, including the Eastern Massasauga Rattlesnake (present in Oakland County) and the Copperhead, not present in Oakland County. Besides its unforgettable behavior pattern when threatened, another defining identification characteristic is its “nose”, perhaps more properly called a snout. The shovel-shaped snout, is a bit “hog-like” which led to the odd name of the snake. In addition to being a tool to create burrows for egg laying, the snout helps to prepare the soil for hibernation and is used to help extract partially buried toads. 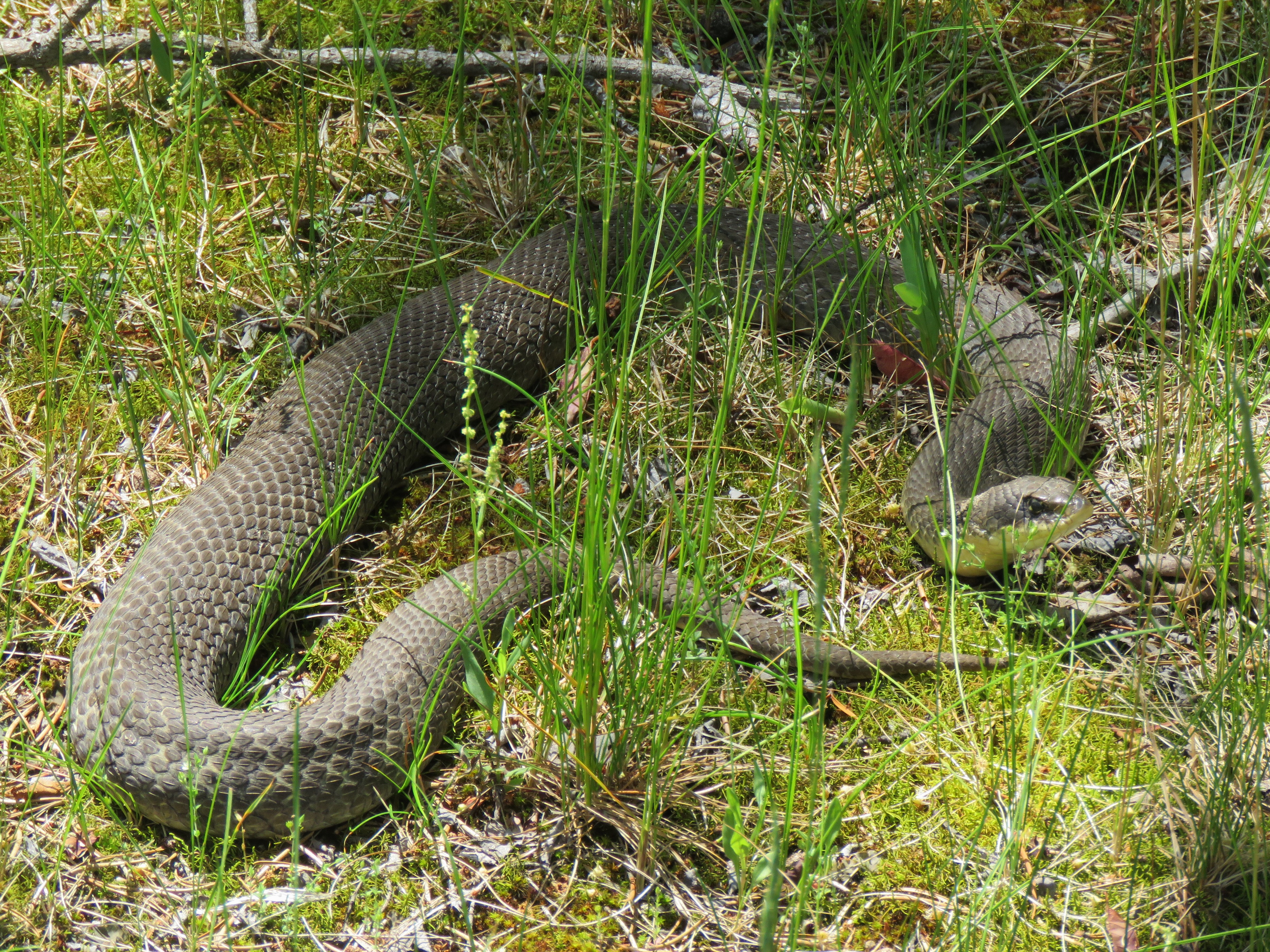 National Park Service Wildlife Biologist Sue Jennings of Michigan’s Sleeping Bear Dunes National Lakeshore has words of advice for anyone that encounters a hognose snake anywhere in our state. “Hognose snakes are fascinating creatures. Although they may act fierce when puffing up, much like a cobra, and feign striking, they are very benign, and often will play dead when threatened. And like all snakes, observe from a distance so as to not cause them undue stress.” Her last sentence says it all, good advice for any snake encounter on the wilder side of Oakland County or in the wooded dunes of western and northwestern Lower Michigan. 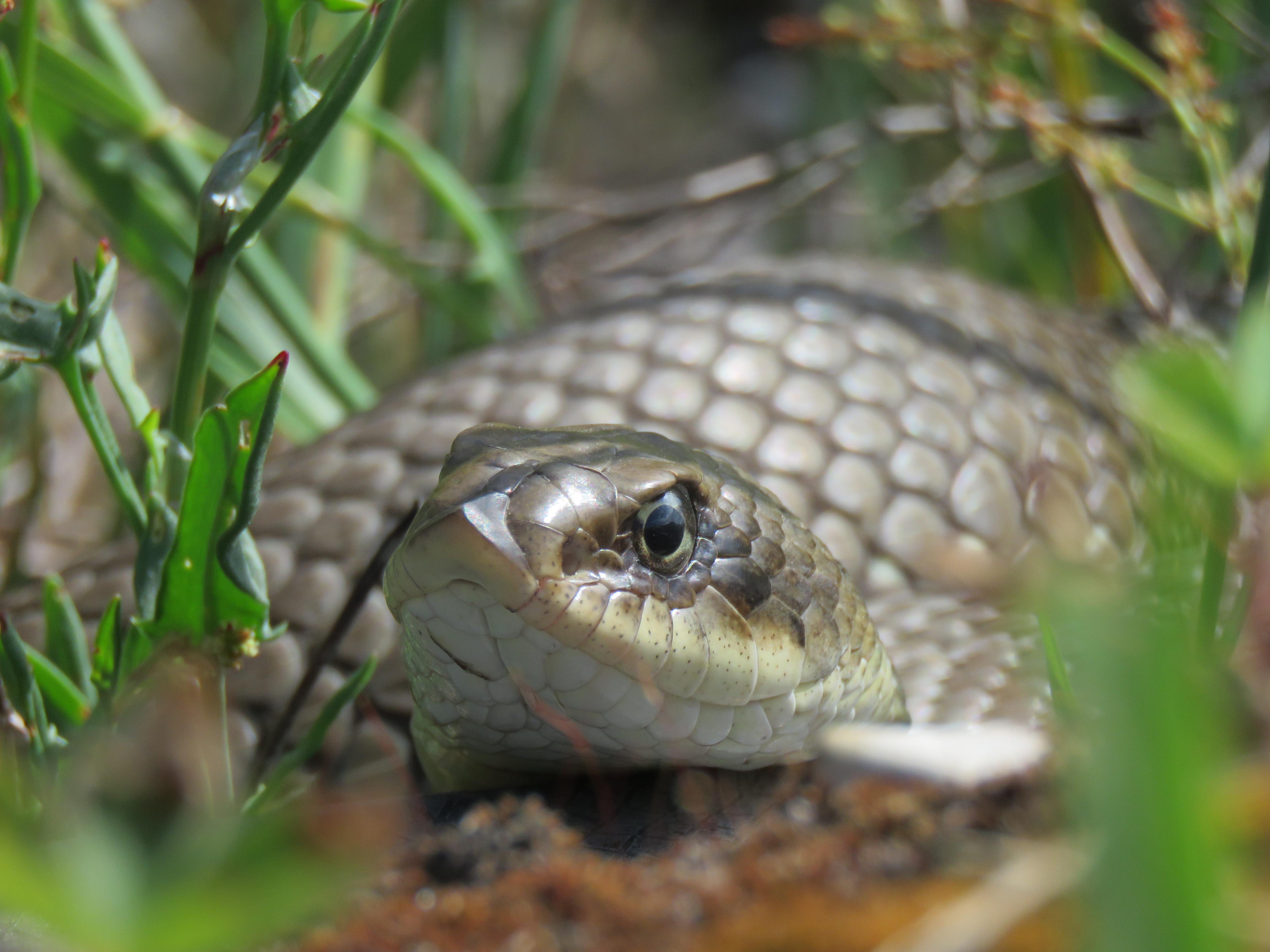 Early June is a month of increased activity for the hognose snakes, a species that truly is worthy of the best actor award. Although the chances of seeing one locally remains slim, encounters do happen in our county, most often in sandy areas of one of our glacially sculpted State Recreation Areas, or other Southeast Michigan wildlands with pockets of suitable habitat. 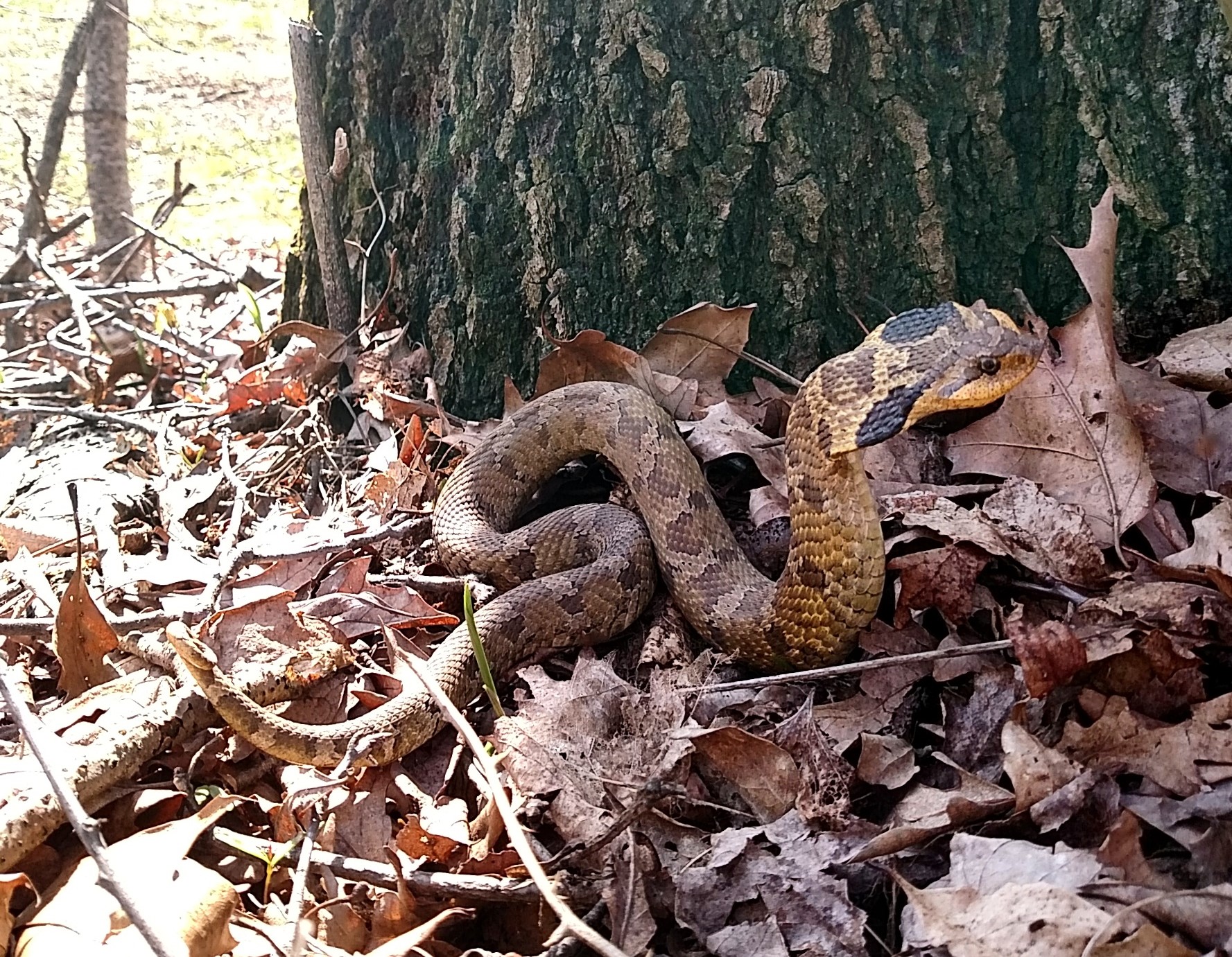 National Trails Day is tomorrow, June 3rd. Maybe you will be lucky and witness the seldom seen, sand-loving, death-feigning snake in our county. Go hike! Hundreds of miles of local trails are waiting for you.

One thought on “Eastern Hognose Snake: Best Actor Award for a Snake”