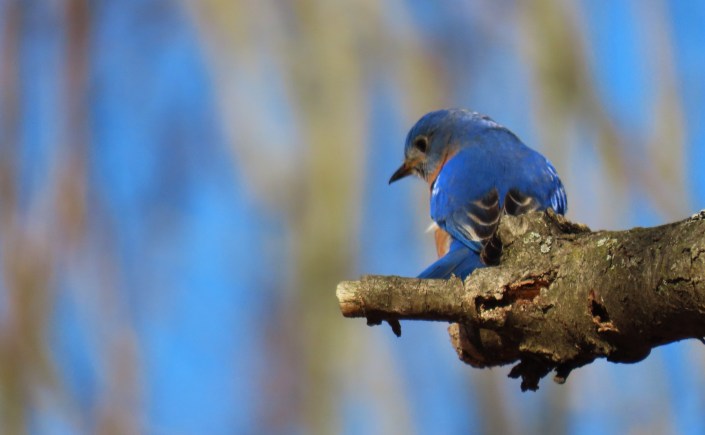 The Spring Equinox is an exciting symbol of rebirth, growth, and awakening. Creatures that hibernated are stirring, birds are returning from distant lands, and the earliest of spring’s woodland wildflowers are pushing up through thawing soils. For me, that moment of recognition of the passing of winter was not the appearance of lawn-hopping robins or the emergence of crocuses. It occurred on the first day of spring at Bear Creek Nature Park in Oakland Township. That’s where a friend and I watched an Eastern Bluebird perched on a tree limb, waiting for an insect to appear in the meadow below. Perhaps its sudden downwards plunge and the capture of a bug that followed was confirmation to the bluebird that, as Thoreau once wrote, “ . . . and finally a day when it arrives.”

Signs of the annual duel between winter and spring are everywhere, with spring the clear winner, an event well forecast by the writings of Thoreau. He often used bluebirds in his musings about spring with two of my favorites being, “The bluebird carries the sky on his back” and “The bluebird comes and with his warble drills the ice and sets free the rivers and ponds and frozen grounds.” The Journal, 1837-1861 (Thoreau, 2009) Although many Eastern Bluebirds overwintered in Oakland County, their activity has increased dramatically since the equinox. They perch on fence posts and are already setting up housekeeping in nesting boxes.

Although White-tailed deer are chiefly nocturnal, they quickly took advantage of snow-free areas on my hillside and “lounged” in the sunlight for a good part of the day. At the risk of being rightfully accused of anthropomorphism, I think they were rather “happy” to have a safe location to sunbathe and relax, just as humans did at picnic areas on the first weekend of spring.

Early spring is prescribed-fire season, and when weather conditions are ideal, trained crews conduct these well-planned operations in our Huron-Clinton Metroparks, Oakland County Parks, state lands managed by the Michigan Department of Natural Resources, and township parks, most notably Oakland Township Parks. The Michigan DNR states: “[A prescribed fire] is the carefully considered use of fire to improve wildlife habitat, get rid of invasive plant species that can crowd out native plants or help reduce debris on the ground that could fuel large wildfires.”

Although temperatures have breached the 60°F mark multiple times, nights are still cold and hail pellets and cold rain may still fall. Conditions are perfect for the emergence of bloodroot, one of the earliest ephemeral flowers of spring.

Its scientific name, Sanguinaria canadensis, references the deep red sap found in the roots and stem that bare a remarkable resemblance to blood. Go for walk in the early days of April and you just may spot one of these spring woodland beauties with its petals wide open in dappled sunlight.

Eastern garter snakes slither about dry crackly leaves, sometimes rising up a bit to look around. Eastern massasauga rattlesnakes – our only venomous reptile – have emerged from the crayfish burrows where they spent the winter and now seek sunny areas for thermoregulation before hunting for mice, voles, and frogs. Attractive new signs from the Michigan Department of Natural Resources advise of the presence of this increasingly rare and protected reptile.

Moisture and warmth has given new luster to fungi of all kinds, with turkey tail mushrooms being one of the most eye-catching. Early spring rains and the rays of the sun make this specimen seem to glow. In another month, it will be the season for morel mushroom hunts, and I too will take to the woods!

Pitcher plants are carnivorous plants that thrive at the edge of some of our protected wetlands and nature preserves. Every spring, shortly after the equinox, I hike to Indian Springs Metropark to view a healthy cluster of these plants. They take on exquisite beauty in the early days of April, a beauty that always lures me in for a closer look. Insects too are lured to the pitcher plant by their sweet nectar – a fatal mistake. They slip from the edge of the curved tube-like leaves and end up in the bottom where they drown and are slowly digested by enzymes that are released into the water.

Delicate appearing blossoms of round-lobed hepatica are emerging through blankets of last autumn’s fallen leaves in the woodlands of the Ortonville Recreation Area, and I suspect in other similar locations throughout our county, with West Bloomfield Woods Nature Preserve being another likely location. They bloom much earlier than most other woodland flowers because their dark green lobed-shaped leaves remained viable throughout the winter, gathering energy and photosynthesizing when not covered by snow or fallen tree leaves.

In the dawn’s early light, gobbles are often heard in woodlands across the county as tom turkeys strut about and try to attract hens. This annual spring ritual is like clockwork, and the turkeys seem to know when spring is here to stay. Watch for them on hikes along forest edges, particularly forests with nut-bearing trees such as oak and hickory. An early morning hike near the nature center of Kensington Metropark will almost assuredly include turkey sightings.

Ducks, geese, and swans are everywhere. Just a few weeks ago, Canada Geese waddled on ice, waiting for the moment nesting begins. One is nesting at the Bald Mountain State Recreation and sharing excellent habitat with Mallard Ducks. I heard the trumpeting of our native Trumpeter Swans on the second day of spring in northernmost Oakland County, but have yet to see any. I was pleased to suddenly spot a Great Blue Heron hunting for frogs near a Mute Swan at the Robert H. Long Nature Park in a rather urban section of Commerce Township. Long Nature Park also rewarded my patience with the sighting of a pair of Tree Swallows perched on a stump. They may have to wait a few weeks for mosquitoes.

Spring peepers, wood frogs, and chorus frogs will be sounding off with their distinctive music over the next week from their respective habitats, adding nature’s magical music to our world. Much to my surprise, a lone green frog emerged from under fallen leaves in a sun-soaked shallow pond on the day before spring at the same secluded pond where I photographed a pair of sunning painted turtles on the first Saturday of spring.

Skunk cabbage is a thermogenic harbinger of spring’s arrival, a plant that actually creates its own heat and melted its way through crusty snow and frozen soil almost two weeks ago. In a few more weeks, my favorite wooded swamp at the Timberland Swamp Nature Sanctuary will be green again with great carpets of skunk cabbage leaves, a confirmation that spring really has captured the landscape and winter is only a memory.

With the hours of daylight increasing, my meandering and explorations of the trails and wildlands of our county will also increase, and I too will “come into the peace of wild things” on the wilder side of Oakland County. Our county has hundreds of mile of trails and thousands of acres of parklands and wildlands. Go hike with a like-minded nature embracing friend and discover the wonders of spring.