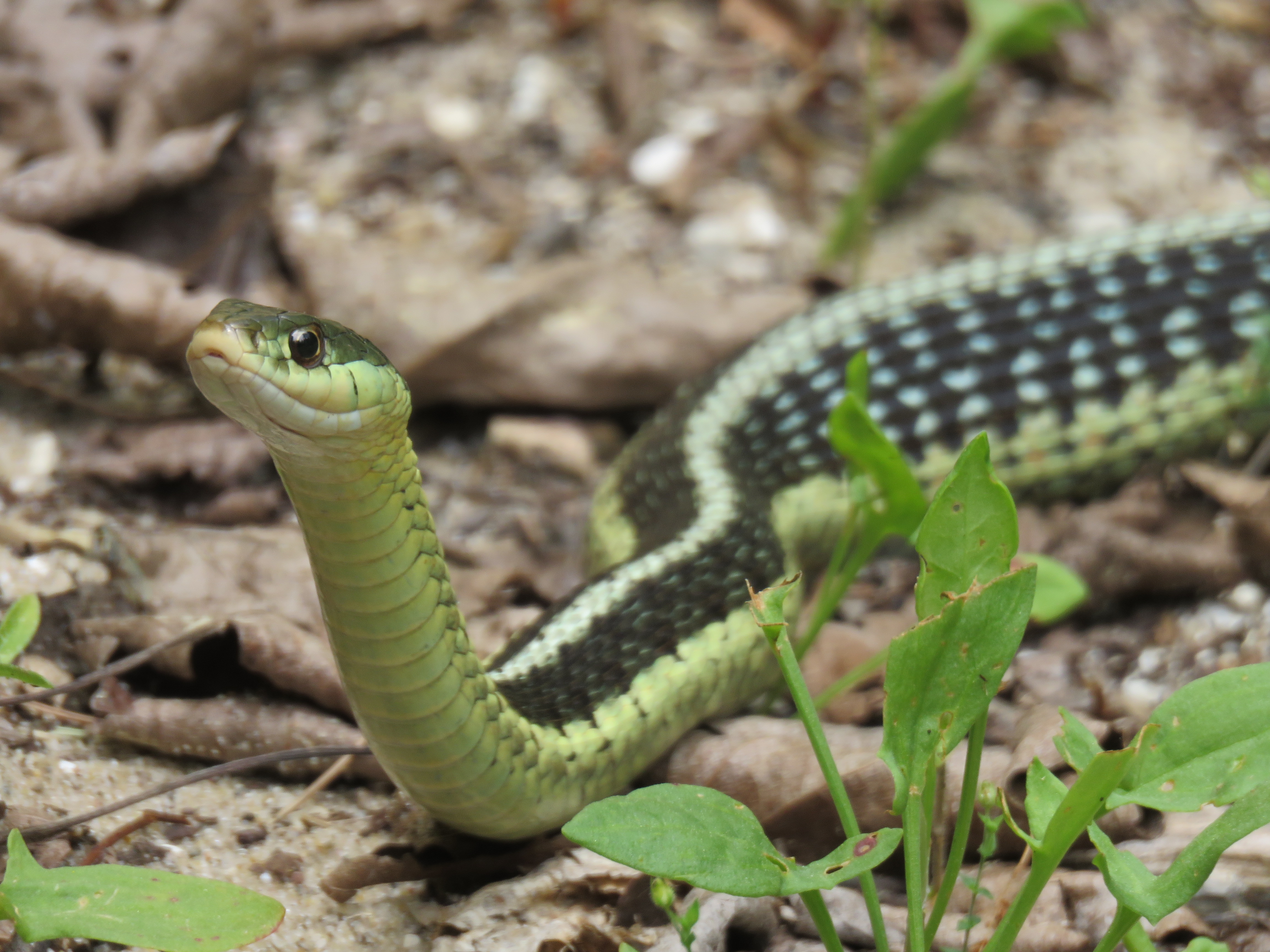 Beauty is in the eyes of the beholder. A summer vegetable garden is not only beautiful, but in the eyes of an Eastern Garter Snake, it’s an oasis of plenty. There, slugs, snails, spiders, grasshoppers, millipedes, bugs, and the occasional low-to-the-ground tree frogs may be hunted. Thamnophis sirtalis, more commonly known as the Eastern Garter Snake, is without a doubt the most commonly seen snake of Oakland County.

A bit of name clarification may be in order as well, for as much as garter snakes are attracted to gardens, there is no such snake species as a “Garden Snake” or “Gardener Snake.” The incorrect name Garden Snake seems to stay with us, and is sometimes repeated by teachers and even park professionals without a strong knowledge of snake species. 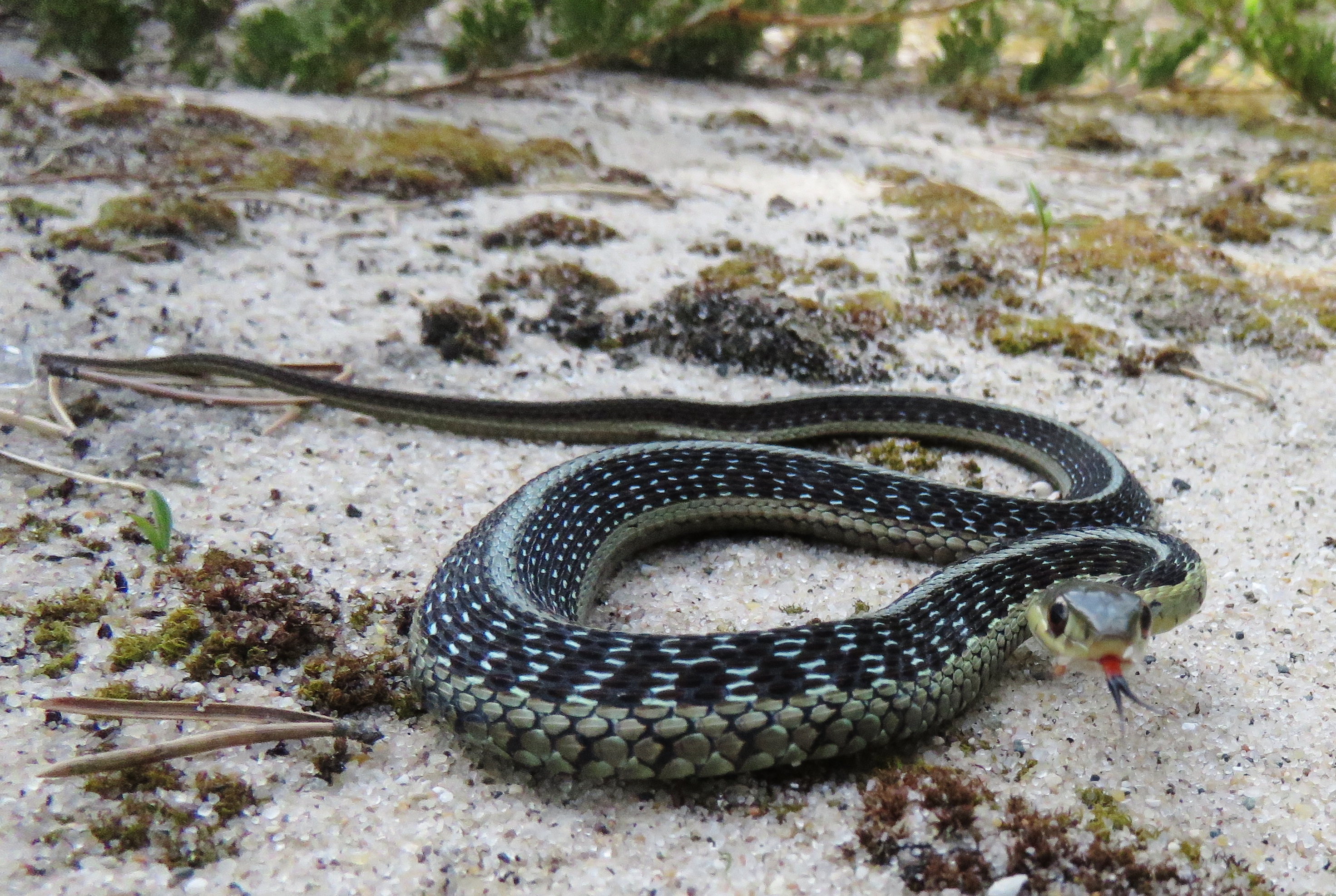 The common name “garter” probably came to be because these snakes have colorful, longitudinal stripes resembling the fancy garters once used to hold up men’s socks. A closer examination also reveals something of a checkerboard pattern resembling patterns sewn into those old-fashioned men’s garters. Most eastern garter snakes display three pale, yellowish stripes against a dark body but there is a great deal of color variation in individual snakes. The body may even have a faint blueish hue or a more commonly noted warm, coppery green. Their forked tongues are noticeably red and tipped in black and their heads are wider than the rest of their body. 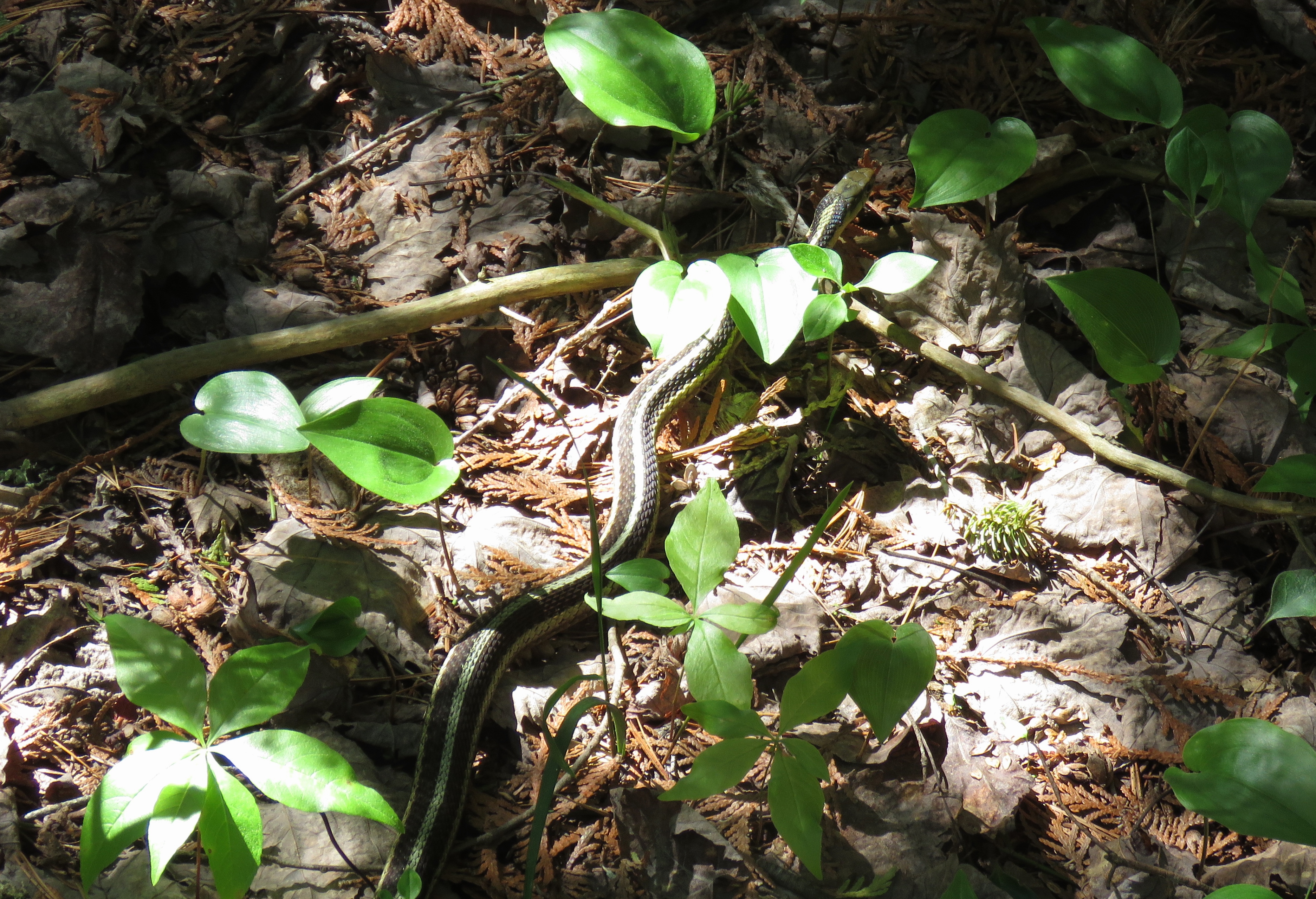 The garter snake is the first snake species most children and adults ever encounter. They are habitat generalists, meaning they do not require a highly specific type of habitat to survive, which is true of our eastern massasauga rattlesnake. The eastern garter snake is found from north of our Great Lakes down to the Gulf of Mexico and as far west as eastern Texas. Although they seem to hold a strong preference for moist grassy areas near water, they also thrive in woodlands, meadows, fields, cemeteries, dry sandy areas, savannah habitat, agricultural areas, along fence lines, stone walls, at the edges of golf courses, urban lots, suburban back yards, under abandoned buildings, and of course, in summer gardens. They are occasionally spotted in water, perhaps lured by frogs or when escaping a predator. All the parklands managed by Huron-Clinton Metroparks, Oakland County Parks, and most city and town park agencies in our county have breeding populations of garter snakes, and in a few more weeks young from this year will be born. 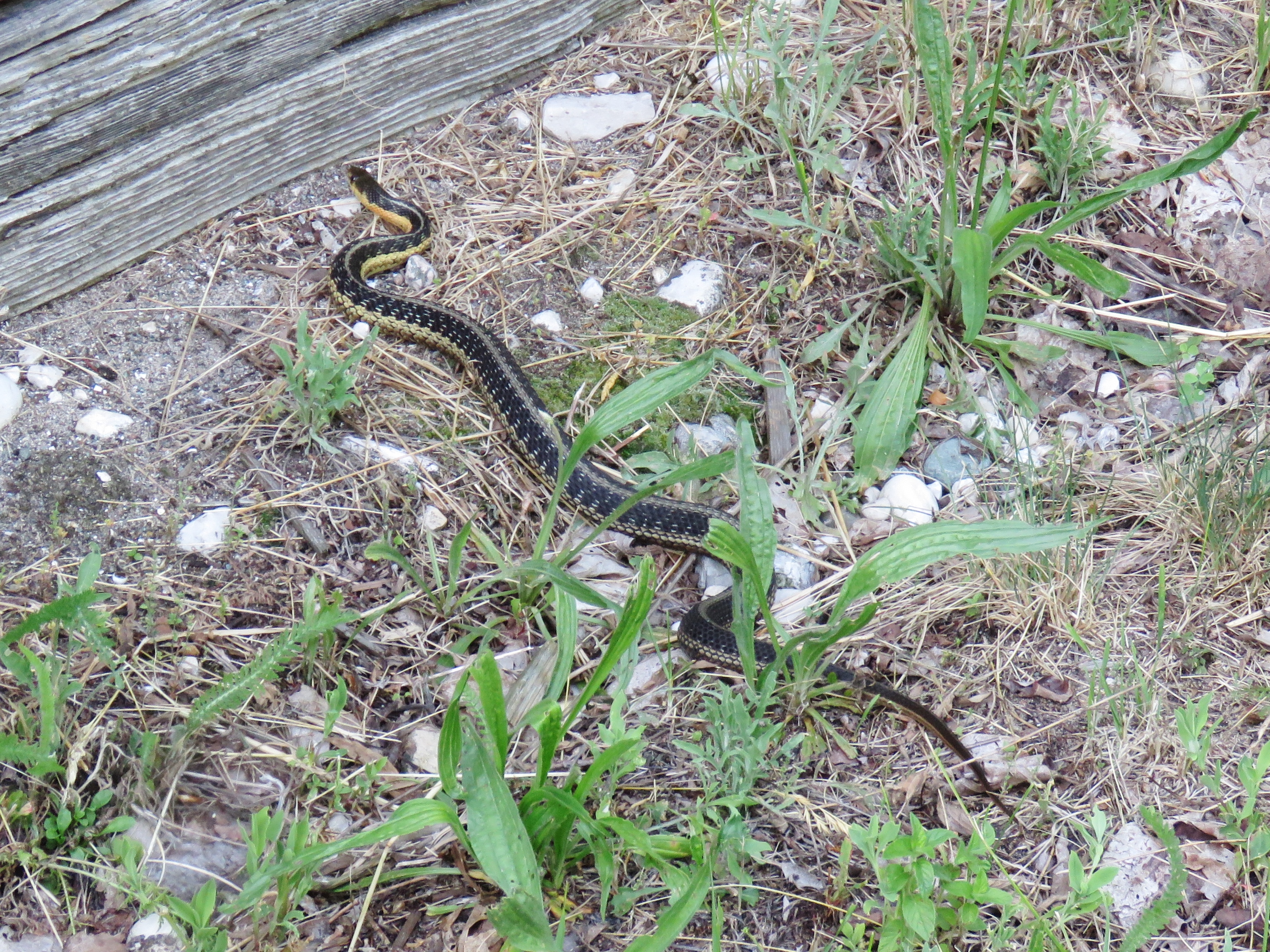 The University of Michigan writes: “Common garter snakes are ovoviviparous (bearing live young). The young are incubated in the lower abdomen, about half way down the snake’s body. Gestation is usually two to three months. Most females in the northern parts of their range give birth to from 4 to 80 young between late July and October. Most litters range from 10 to 40 young and litter size depends on the size of the female, with larger females giving birth to larger litters. Upon birth, baby garter snakes are independent and must find food on their own.” 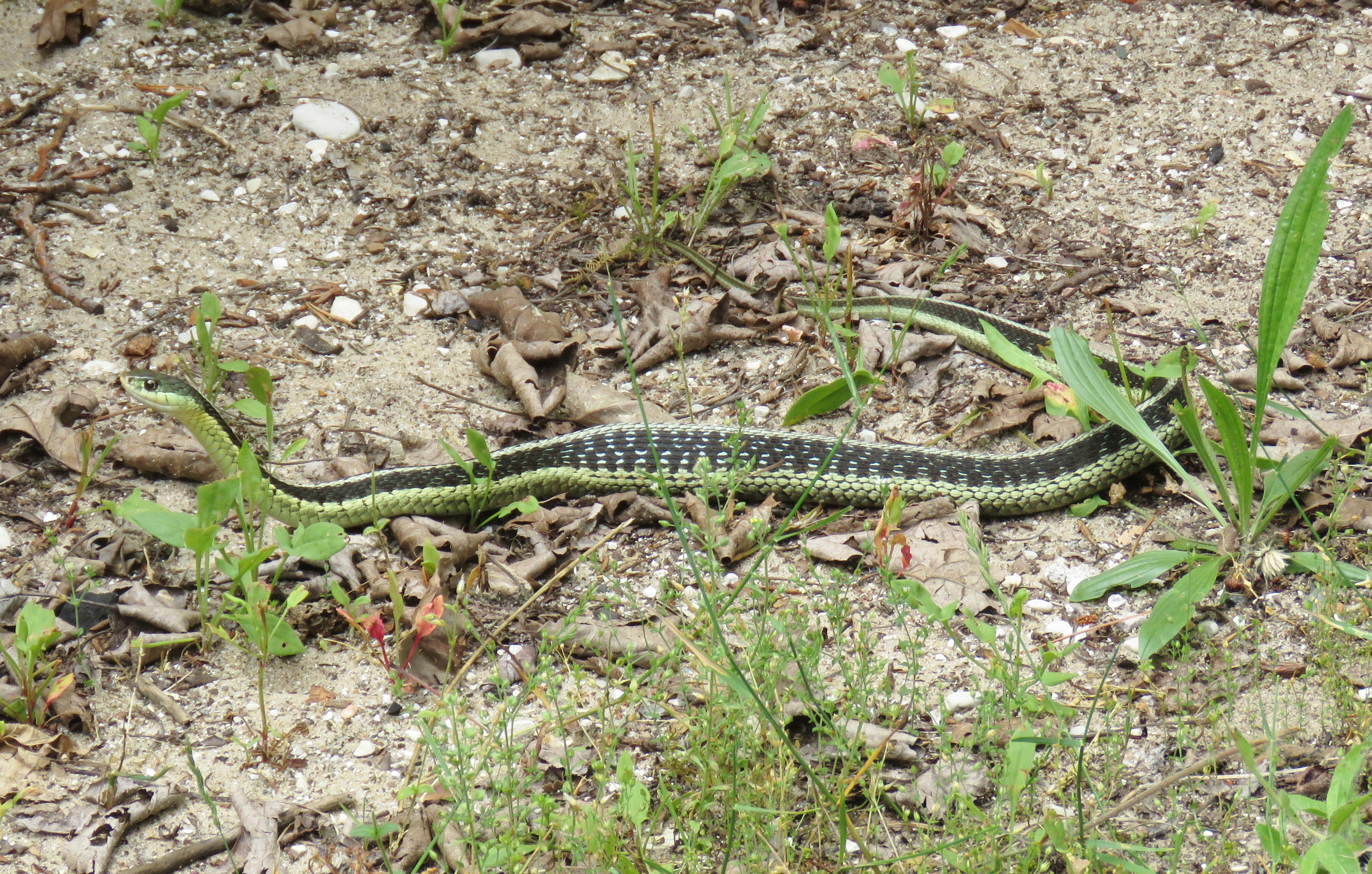 Many of those young snakes are quickly consumed by a great variety of predators including bullfrogs, milk snakes, raccoons, opossums, snapping turtles, great blue herons, crows, hawks, squirrels, house cats, mink, coyotes, foxes, skunks and even shrews. The eastern garter snake, like all snakes, uses thermoregulation to control body temperature, basically meaning it uses external warm or cool surfaces to control its own body temperature. Many of them make the fatal choice of basking on a road or a paved trail to warm themselves on a cool summer afternoon. 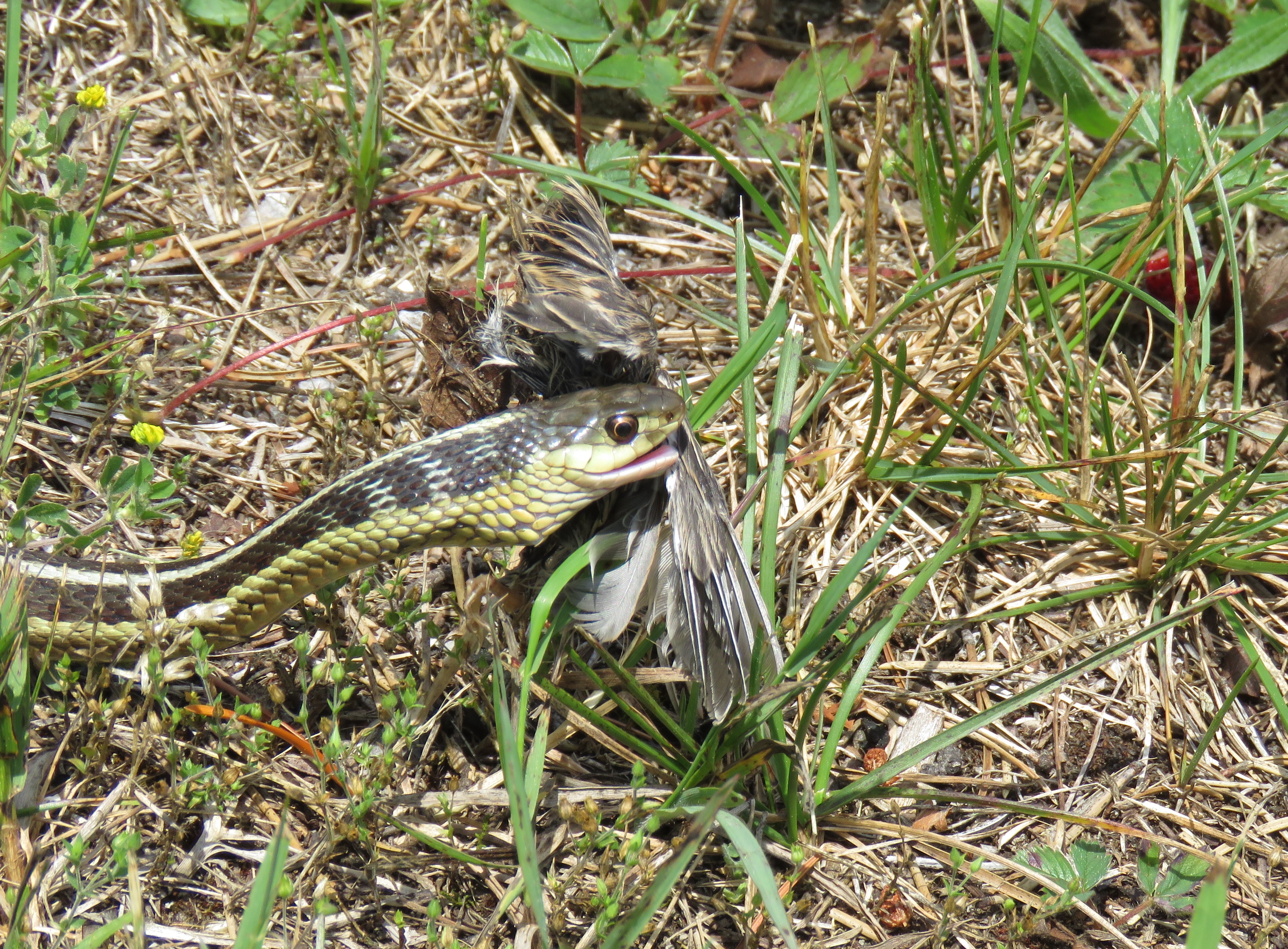 Garter snakes are highly variable in size. Most garter snakes that are seen locally, or are captured by an excited child, are less than 18 inches long, but some specimens can reach three feet long. The larger specimens are opportunist hunters and go after larger prey, including mice, frogs and birds. If the prey is small like a worm or grasshopper, it’s swallowed quickly. Larger prey, like a struggling small bird, will make it necessary for the snake to unhinge its jaw before swallowing. Larger prey may be dragged around for a while before being swallowed. My best guess is the trauma sustained by the soon-to-be-consumed creature while being dragged about helps subdue it. The tiny backwards pointing teeth and muscle of the throat area then facilitate the process of working the prey down to the stomach. 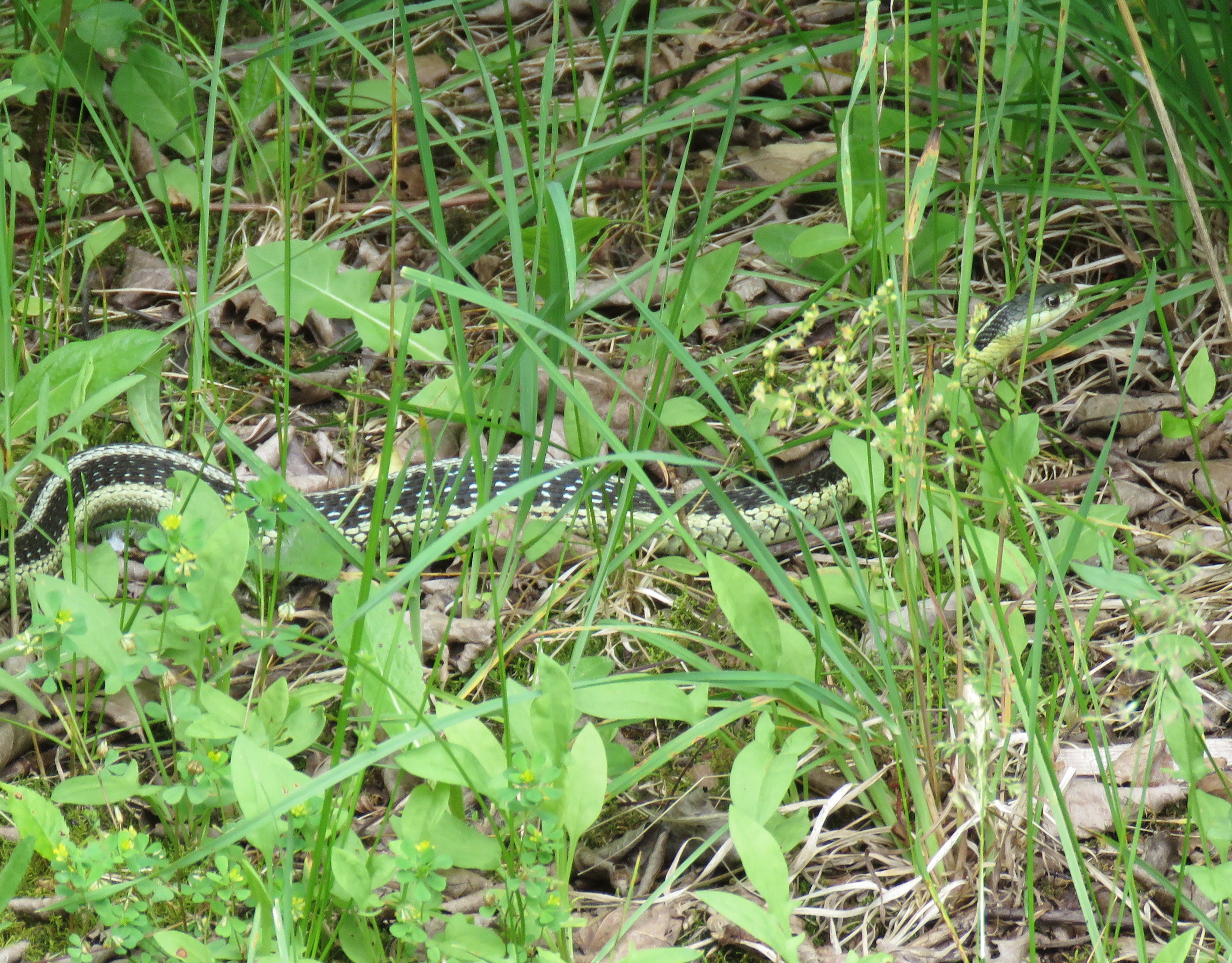 A literature search provides conflicting information about the ‘shyness’ or ‘aggressive’ behavior of eastern garter snakes. Snakes, like humans, respond in different manners to perceived threats. A startled garter snake often starts to flick its forked tongue to collect chemicals from the air, and then insert the “forks” into a special organ, the Jacobson’s organ in the roof of their mouth, which interprets the collected chemical pheromones. Some garter snakes will stay motionless if a threat (a human) is nearby. Their superb camouflage in the shadows of tall grasses is usually sufficient to hide them entirely. But if cornered, or out in the open, a garter snake may coil and strike or even advance towards the threat. I have witnessed and photographed both behavior patterns. Grab one and handle it roughly and once in a while it may manage to break the skin and leave the tiniest of teeth marks. 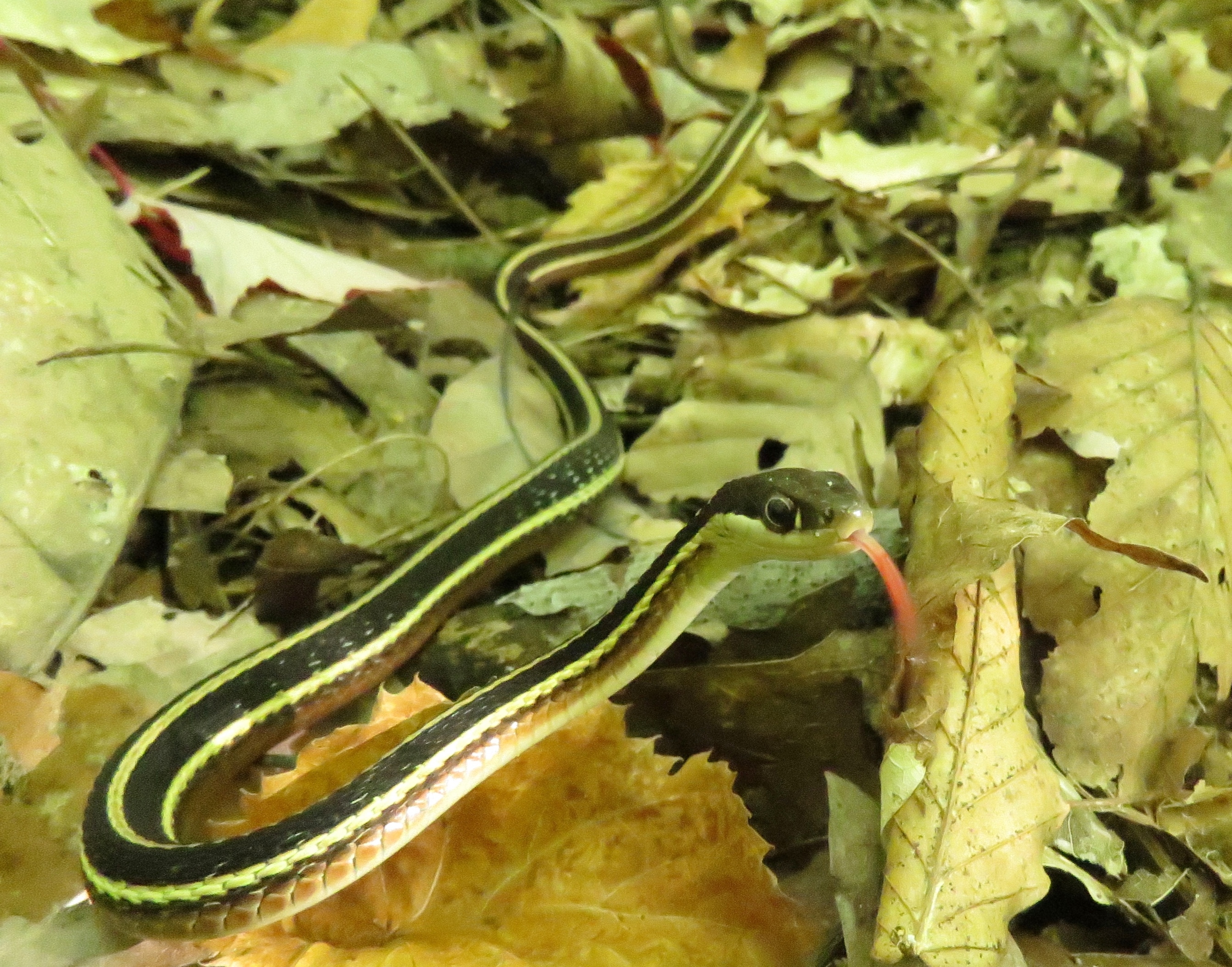 Oakland County has one look-alike snake, the closely related and thinner semi-aquatic Eastern Ribbon Snake, Thamnophis sauritus. Even some field naturalists, and this writer, make mistakes when it comes to rapid-fire identification of the eastern garter snake and eastern ribbon snake. Both species are found in Oakland County in similar habitat, but with experience, a pro can quickly say with a high degree of confidence: “That’s a ribbon snake.” There are some subtleties of differences pertaining to scale rows, and side stripes that will be noted by herpetologists, but novices should look at the eye. A small white spot is in front of each eye of the ribbon snake; garter snakes do not have eye spots. This small ribbon snake, a semi-aquatic species, posed for me last October at the edge of a paved trail at Independence Oaks County Park. 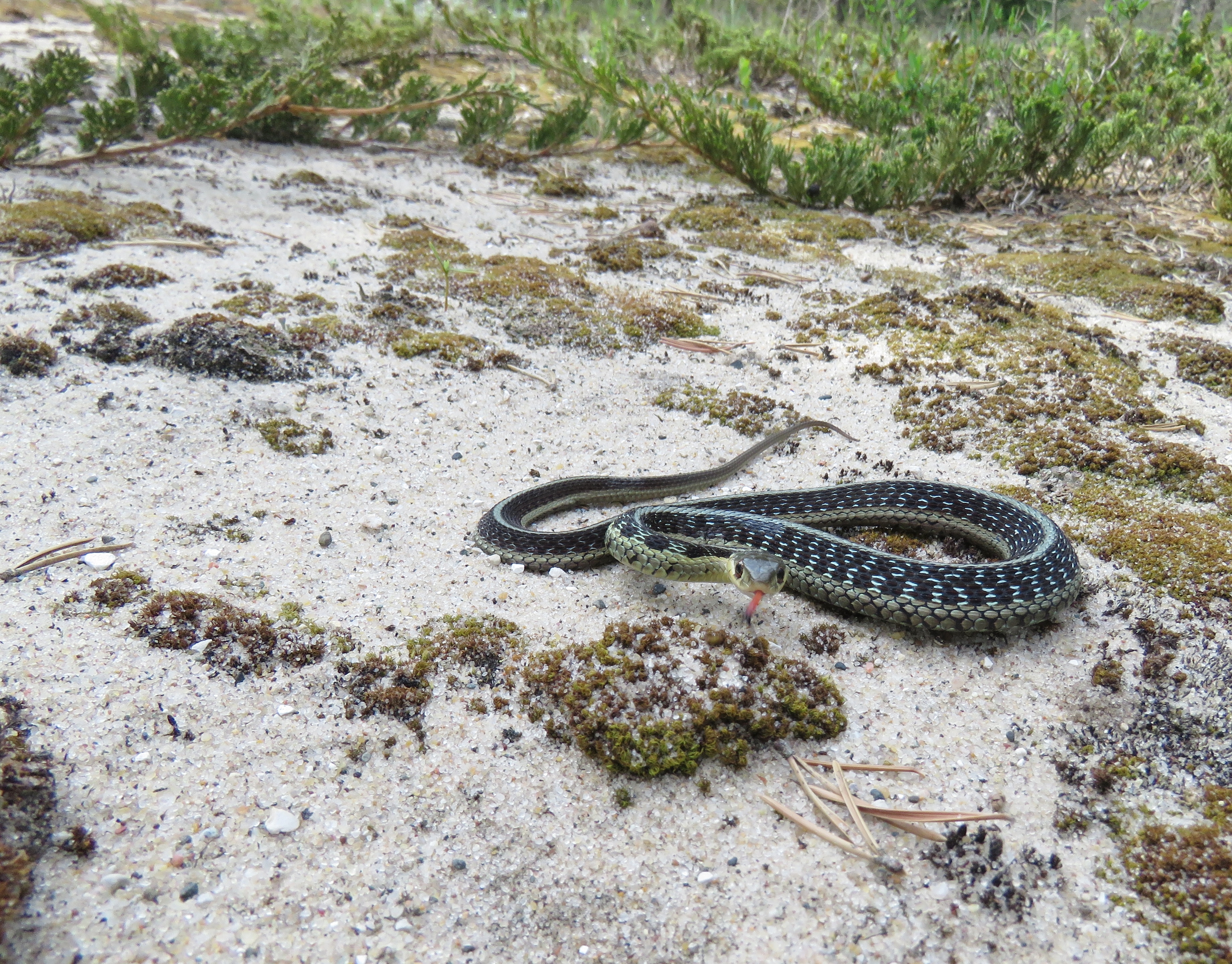 The only truly venomous snake of Michigan is our eastern massasauga rattlesnake, however eastern garter snakes do produce a neurotoxin that helps to subdue small prey and make it easier to swallow. Occasionally minor swelling and localized itching, signs of an allergic reaction, occur on the offending hand of a human who grabs a garter snake, and as a result sustains a bite. Usually however, a frightened garter snake just emits a strong foul-smelling musk that will encourage the predator or human hand to let go. There is one certainty when it comes to interactions with humans. Leave them alone and our well-tempered striped slitherer of the garden, the eastern garter snake, returns the favor.

5 thoughts on “The Eastern Garter Snake, a Common “Garden” Snake”