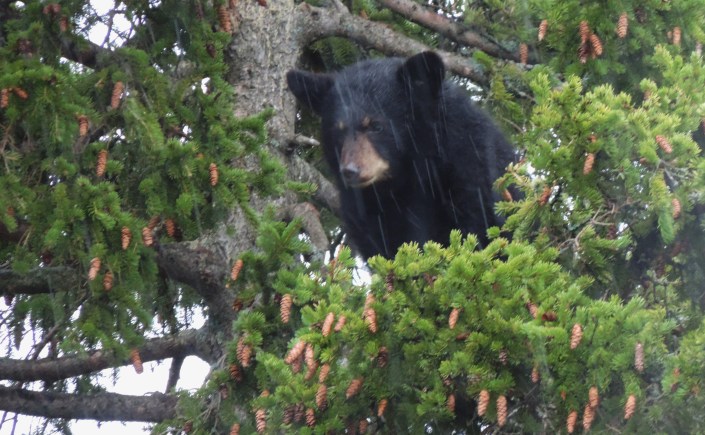 I will assume you started reading today’s Wilder Side of Oakland County because of the black bear in the tree. I’ll confess: I used that photo to draw attention to today’s blog. However, I captured that image about 10 years ago in northern Ontario when a black bear yearling took shelter in the lofty branches of a spruce tree, one of many types of conifer trees in North America. It was retreating from humans, myself included, and we wisely went our separate ways.

The season of the annual Christmas tree hunt has arrived. But just what is a “Christmas tree?” The last few weeks had questions coming my way inquiring about “wild” Christmas trees of Oakland County. One question had an obvious error that had me laughing. The writer meant to inquire about different kinds of conifers that grow in Oakland County that would make good Christmas trees. A spell check error had him asking about good carnivorous trees for his home. Conifer trees do however provide excellent ambush habit for carnivorous birds such as Cooper’s hawks that wait for prey to fly by.

Before I could write back that a carnivorous (meat-eating) tree would not be a good idea for the holiday season, he sent a follow up email clarifying his spell check error and had me thinking about our conifer trees. One conifer in particular came to mind, the American Larch, also known as a tamarack tree. The very same day, a two-part question came my way inquiring what evergreen tree sheds it needles and why some oak trees keep their leaves all winter.

Those exchanges make today a perfect day to explore the sometimes confusing world of conifers vs, evergreens, with attention toward our wetland-loving tamarack trees (Larix Laricina). Tamaracks thrive in wetland areas of northern Oakland County and are our deciduous conifer.

So what actually is a deciduous conifer tree? A non-technical definition of the word “deciduous” is in order first. A deciduous tree drops all of its leaves annually at the end of the growing season. There are dozens of examples, with perhaps the sugar and red maples being the most colorful before dropping their leaves. Oak trees, one of the most common trees of our OAKland County are also deciduous trees, but many of them, especially the young ones, hold onto their dead leaves until spring, as this one at the edge of my driveway clearly demonstrates. That fact alone should remind us there is great variety in the ways of nature.

The tamarack tree is one of the few species of conifers that are not green forever, and they are the only native deciduous conifer of Michigan. Every autumn, their tiny green needles turn golden yellow before cascading onto the forest floor, creating a unique shade of seasonal beauty. Tamaracks thrive along the boardwalk leading to Upper Bushman Lake at Independence Oaks County Park – North, a location where I took many of today’s photos. Sometimes after the needles fall, there are hidden surprises on the branches, such as this large Bald-faced Hornets’ nest I encountered last month at Indian Springs Metropark.

The words “evergreen” and “conifer” can cause confusion and are not truly interchangeable. They used to confuse me too, until I did a bit of research. The word conifer denotes the reproductive methods of trees, the word evergreen pertains to the nature of tree’s leaves. Basically, an evergreen tree is a tree that keeps its leaves. We call those leaves needles.

The Spruce defined the difference this way:

“While there is overlap between the two botanical classifications, “conifer” and “evergreen,” their definitions actually address separate issues. The former pertains to means of reproduction (the cone); the latter, by contrast, pertains to the nature of a tree’s leaves (or “needles”). Perhaps the best-known example of the fact that not all conifers are evergreens is the larch tree (Larix laricina), also known as the “tamarack” tree. In summer, tamarack looks like it would be one of the evergreens, because it bears green needles. But this conifer is a deciduous tree. It even bears fall foliage, as the needles turn yellow in autumn.”

Confused? Keep reading. But be warned, it may get more confusing. The words “pine tree” and “conifer tree” are not interchangeable either, even though I often hear any tree with ‘needles’ being referred to as a pine tree, and we have many kinds of pine trees in our county. The Latin word “conus” means “cone” and “ferre” means “to bear,” so conifer means “the one that bears a cone.” “Deciduous” means “the dropping of a part that is no longer needed” or “falling off at maturity.” Deciduous or broadleaf trees lose all of their leaves for part of the year.

The white pine is the largest conifer tree in the Northeast and is easily recognized by its cluster of five long needles. Most of our county parks and state recreation areas have fine examples of both newly emerging and very large conifers. Since they hold most of their leaves (which we call needles) all winter long, clusters of conifer provide quality shelter for wildlife, especially deer that often bed down under them onto the needles that fall.

The Northern white cedar is my favorite conifer of our northwoods. It has flat sprays of dense foliage with eye-catching, scale-like leaves arranged in rows along the twigs. Lower branches often droop almost to the ground, creating excellent shelter for small birds and mammals.

As the hunt for Christmas trees accelerates, keep in mind it is illegal to cut down trees in our parks. My hiking partner and I once encountered a gentleman on a trail with a live tree protruding from his backpack. We were speechless. Use our Oakland County tree farms interactive map and blog to locate a farm where you can find the perfect tree for the holiday season.

Early December is a perfect time to explore our woodlands and wetland edge zones. Walk slowly, stop often, look, and listen. Conifer woodlands provide excellent sheltering habitat for birds, squirrels, deer, red foxes, and coyotes. They are also peaceful places for humans to hunker down in magnificent wildness on a snowy winter day and enjoy the splendor of nature’s silence on the wilder side of Oakland County.

One thought on “Conifers, Evergreens, and Christmas Trees”