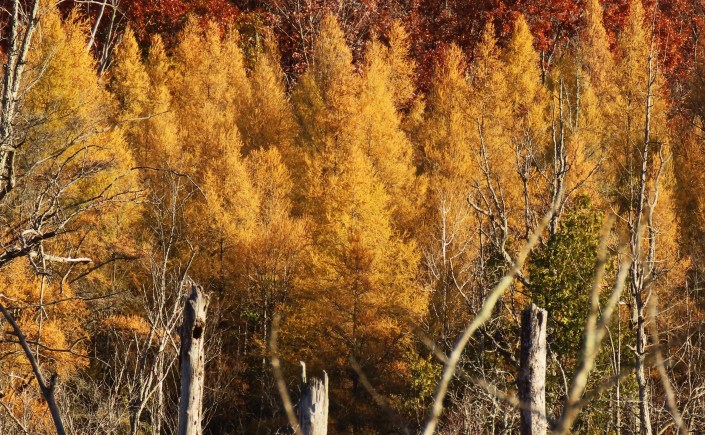 The ephemeral beauty of eye-catching October tree colors faded as the winds of November strengthened. But what a month it was to explore nature’s artistic way in Oakland County and the rest of Michigan. Hikers and trail runners often paused in our parks to observe perhaps the best kaleidoscope of leaf colors in a decade, a gift from Mother Nature that coincided with an equally colorful forest floor display of fantastic fungi. Gone are the bold, brilliant shades of deep orange of sugar maples. Gone are the reddish hues of sassafras, sumacs, and red maples. Gone are the dazzling, wind-driven yellow “sparkles” of aspen leaves that quaked in gusts of wind.

October was truly golden, but the show is not over yet. One tree species is a hold out and is just now exploding into a soft, golden luster of beauty, a color I describe as “smoky gold.” A confession is in order, for my use of the words “smoky gold” is far from original. I first came across the wonder and meaning of those two words used in combination during my college days in Vermont when I was introduced to Aldo Leopold’s memorable collection of essays titled, A Sand County Almanac (Leopold, 1949). His almost poetic writings increased human understanding of our environment and the often overlooked wonders of the natural world. His observations were a profound eye-opener for me to the subtleties of nature’s way back then, a passion that continues and grows today.

One of Aldo Leopold’s best known essays is titled, Smoky Gold and was my unexpected introduction to the mysterious world of the tamarack tree (Larix laricina): a wetland-loving, “rule-breaking” evergreen tree that seemingly makes exceptions to the rules of nature. Leopold wrote:

“Lunch over, I regard a phalanx of young tamaracks, their golden lances thrusting skyward. Under each the needles of yesterday fall to earth building a blanket of smoky gold; at the tip of each the bud of tomorrow, preformed, poised, awaits another spring.”

Those words were intriguing, for I had never seen or even heard of a tamarack tree before then, yet they were all around the swampy areas near the campus. Perhaps I just had not noticed. That changed quickly and now every late October I look forward to their special shade of gold: smoky gold. Tamaracks are very much at home in Oakland County, and the annual show is well underway and racing towards a conclusion.

Want to see “smoky gold?” It’s easier than you may think, but do it now. The short-lived color show of a tree that dares to be different won’t last long. Don’t waste time looking for tamaracks on suburban streets, in fields, or in deep shaded woods. The tamarack is a moisture loving “habitat-specialist” that thrives in full sunlight along the edge of swamps and bogs across our county, as well as cold, swampy regions of much of the northern United States, especially Michigan, Minnesota, Wisconsin, New York, New England, and a large swath of Canada up towards the arctic circle.

Tamaracks are common near shorelines of some of our lakes in our State Recreation Areas, Huron-Clinton Metroparks, Oakland County Parks, and along rural roads that meander near wetlands in northern Oakland County. Don’t forget the sanctuaries and preserves managed by the Michigan Nature Association, Six Rivers Land Conservancy, North Oakland Headwaters Land Conservancy, and Southeast Michigan Land Conservancy. They all have hidden pockets of smoky gold. Some of my best photo opportunities have been at Indian Springs Metropark and Independence Oaks County Park.

I get asked about tamaracks every autumn. Some just rave about their beauty, others are concerned their “Christmas trees” in a backyard swamp are dying. The tamarack is also known as an Eastern or American Larch. During summer it tends to go unnoticed, for it resembles other evergreen trees to the casual observer. But it’s a very different kind of evergreen, even though it’s a coniferous, or cone-bearing tree with needles. Unlike any other conifers, the tamarack sheds all of its needles every autumn.

What happens just before the dramatic “needle fall” begins is what makes the tamarack one of the most beautiful trees of the wetland edge of the forest. Every single one of its soft needles turns to gold, a smoky gold that is beyond stunning, especially in early morning or late afternoon sunlight. Witnessing the often wind-driven cascade of golden needles down to the forest floor is also an unforgettable moment of nature’s way as it creates, in Leopold’s words, “a blanket of smoky gold.” On November 1st, as I wandered Independence Oaks County Park, tamarack needles and light hail pellets fell in combination on a boardwalk confirming the duel between the seasons has accelerated.

Another, more subtle, show continues on the barren branches well after needles fall. Tiny seed-bearing cones remain on the branches well into winter, providing several months of easily accessible food for seed-eating birds, such as the Black-capped Chickadee. I make a point every winter to wander the peaceful woods of the Lakeville Swamp Nature Sanctuary and last winter was no exception. I was greeted with the song of chickadees flitting about the seemingly barren branches, feasting on the hidden tamarack seeds, and at times, doing a bit of chattering, perhaps protesting the intruding humans below.

When winter snow roars into Oakland County, tamaracks draw attention once again, for much of the snow slides off the bare branches, creating ghostly images in swirling snow. During the winter season, the tamarack swamp belongs to Barred Owls, white-tailed deer, and of course, humans lured by the wonders of nature. Tamaracks are a cold-tolerant ancient tree, making winter a perfect time to read Leopold’s words in their entirety. Their fossils have been found on Ellesmere Island in the Canadian High Arctic and date back to 65 million years ago.

Tamaracks have a rich history and documentation of the trees’ value and uses have been passed down from generation to generation by Native Americans. The very name, tamarack, comes from an Abenaki word for “wood used for snowshoes.” The Nulhegan Abenaki Tribe were the original residents of New England and very much at home in the land we call Vermont. Tamarack was used in medicine, the inner bark of young trees had been used as food, and in the days of tall wooden sailing ships, the strong and flexible roots of tamarack were even used to connect the ships ribs to the deck timbers.

The Cree Tribe also used tamarack for snowshoe frames and bent it around logs to create toboggans. I was intrigued by the many uses in the days before European settlers set foot in North America and so I contacted Sakoieta Widrick, a First Nations friend of mine and member of the Wolf clan of the Mohawk who lives in Ontario, Canada. He shared a legend with me:

“The Creator had asked all the trees to stay awake while he went about doing his creative work. Twice he came back and found them all asleep. He woke them up each time and asked them to stay awake. When he returned the third time, they were all asleep again. It was then that he told them because they had fallen asleep, they would enter a time each year when they would fall asleep for a period of time and lose their leaves. The only ones who had managed to stay awake were the evergreens. From this time forward, they would stay evergreen year-round and thus would be a medicine tree.”

Based on that legend, we both believe that the tamarack tree also fell asleep.

For one more dose of the beauty of autumn, head to a sunny swamp on the wilder side of Oakland County. It’s totally tamarack time and the magic of smoky gold won’t wait for you! Just don’t forget to come back in spring for more tamarack beauty, when tiny, rosy pink cones appear, announcing that the life cycle of tamarack, a tree that dares to be different, marches on.