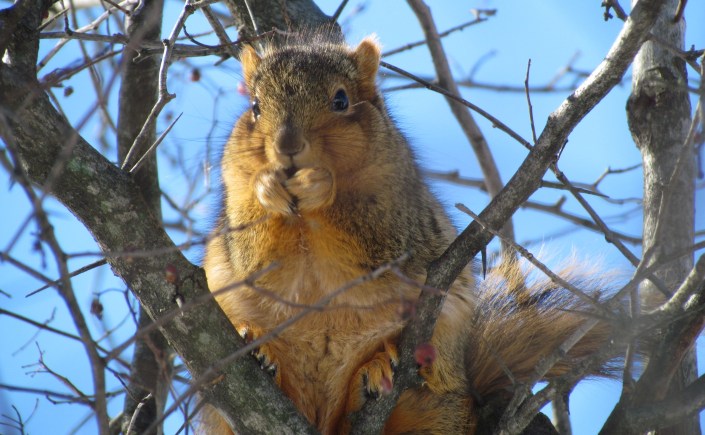 They have chisel-like front teeth, powerful legs, flexible ankle joints, furry paws, sharp claws, keen eyesight, sensitive whiskers, and they always have a multi-function colorful blanket at the ready. Their menu varies with the seasons, and December is their season for feasting on high-energy nuts and frosty tree fruits, and, of course, the seeds at your bird feeder. As I write these words, I’m watching one gnawing away at a black walnut from the security of a tree limb barely twenty feet from my door on the wilder side of Oakland County.

It’s time to get to know the Eastern Fox Squirrel (Sciurus niger), an abundant midwestern squirrel species that thrives in much of our county and is found all across the lower peninsula. Their orangish fur, large size, long tail, and acrobatic skills make them perhaps the most recognizable tree squirrel of Oakland County. December is a wonderful month for encounters with our natural world, especially squirrel watching, with the fox squirrel often taking center stage.

One of their most common poses is their back to the wind with their heavily-furred tail draped over their back like a blanket. In some ways, the tail of the fox squirrel is their version of a Boy Scout’s Swiss Army knife, a tool with endless uses to fit changing situations. The tail is often used as a communication device. Tail-flicking and twitching is something I often witness when I invade their territory. In addition to being a blanket on a snowy winter day, it functions as an umbrella when it’s raining, or a shadow casting sun shade during extreme heat. As it turns out, the very word “squirrel” comes from the Greek word “skiouros,” meaning “shadow tail.”

Michigan has nine species of squirrels. Five of them, including the fox squirrel, are tree squirrels. The four others are defined as ground squirrels.

Tree squirrels are mostly up in the trees, and ground squirrels are mostly on the ground, but as nature-savvy observers know, there is a lot of behavioral crossover when searching for food or escaping a dangerous situation. If we could decipher squirrel talk and body language, we might hear, “Fox coming! Run for a tree now!” and a ground squirrel races up a tree, or “Get underground! Hawk swooping!” and a tree squirrel dives into a nearby den or freezes in thick shrubbery.

Oakland County has four species of ground squirrels, one of which may come as a total surprise. The thirteen-lined ground squirrel, the eastern chipmunk, and the least chipmunk are all ground squirrels and spend much of their time in underground dens when they are not scurrying about on the surface. I’ll confess that I was unaware we had two species of chipmunks in Michigan until I did some fact checking for this fox squirrel tale. Wisconsin’s’ Environmental Education for Kids explains the two species of chipmunks this way: “You’ll have to look close to tell the least chipmunk from the Eastern one. It is smaller (body is 3 ½ – 4 ½ inches, tail is 3-4 ½ inches) and the stripes go down the back all the way down to the tail.”

If you’ve been counting the number of species, we are up to eight. The ninth one is also a ground squirrel and is the largest species of squirrel found in Michigan. At the moment, they are hibernating and have at least two months of slumber to go before its time for their special shadow casting event on the second day of February. You guessed it—it’s the groundhog! Yes, a groundhog is a squirrel and our most rotund species of squirrel. As I discovered a few years ago, groundhogs, also known as woodchucks, easily climb trees, especially when after young mulberry leaves, a delicacy for our largest species of tree squirrel.

Fox squirrels have very keen eyesight. Their peripheral vision is as good as their focal eyesight, enabling them to see what’s above and beside them without moving their heads, making it hard, but not impossible, to sneak up on them. They are also highly opportunistic feeders and do not plan a “menu” in advance, except perhaps for bird feeder raiding, a behavior that can be risky. Red-tailed and Cooper’s hawks will station themselves near bird feeders and a fox squirrel’s gluttonous behavior on the ground becomes an easy target, especially when they are half underground chowing down seeds under the snow.

Barred Owls sometimes perch at the edge of woods in daylight, and a fox squirrel scurrying across the snow may be a tempting target for the owl or any other raptor. I’ve been watching one fox squirrel that perches on top of my wooden swing and devours incredible amounts of corn on the cob left over from Halloween decorations.

The squirrel is a bit on the heavy side and most likely a tempting target for aerial predators. Evidence in fresh snow confirmed the last moments of another fox squirrel that became dinner for a raptor, but that is part of nature’s way. A bit of nature detective work and faint wing prints in the snow led me to the conclusion that a red-tailed hawk had that careless fox squirrel for a morning snack.

The natural diet of fox squirrels in the winter includes nuts of all kinds, especially shagbark hickory, black walnut and acorns from the hundreds of thousands of mature oak trees found in Oakland County. Frozen crab apples are also a favored early winter treat, and fox squirrels have the climbing skills to get out on and dangle down from thin branches for their meal.

When spring arrives, their diet changes rapidly and includes buds of trees, berries, and flowers. Fox squirrels are omnivores and also eat bird eggs, fledglings, big insects, and even small mammals such as meadow voles. They also adapt quickly to human presence near office buildings and learn to beg for treats.

I enjoy watching fox squirrels when hiking woodland trails and sometimes they seem to watch me. On occasion when I restock a window feeder for birds, a fox squirrel takes notice. This acrobatic fox squirrel will then leap to my roof from an adjacent tree, make its way down to my lower level den roof and finally dangle upside down before a final dramatic leap to reach the window feeder.

How do they do it? It’s all in the ankles. I’m sure you have noticed that squirrels frequently climb down trees head first, an easy task for them, yet ridiculously impossible for humans and most other creatures. All tree squirrels have ankle joints that are adapted to be super flexible. When a squirrel wants to climb down, it can rotate its feet 180 degrees, dig its claws into the trunk, or the eves of my den, and hang from its back legs and swing back and forth to line things up for the great leap.

The next time you have a fox squirrel at your bird feeder, don’t fret. Welcome it. You just might discover that watching these colorful tree squirrels that spend much of their time on the ground adds enjoyment to wintry days on the wilder side of Oakland County.