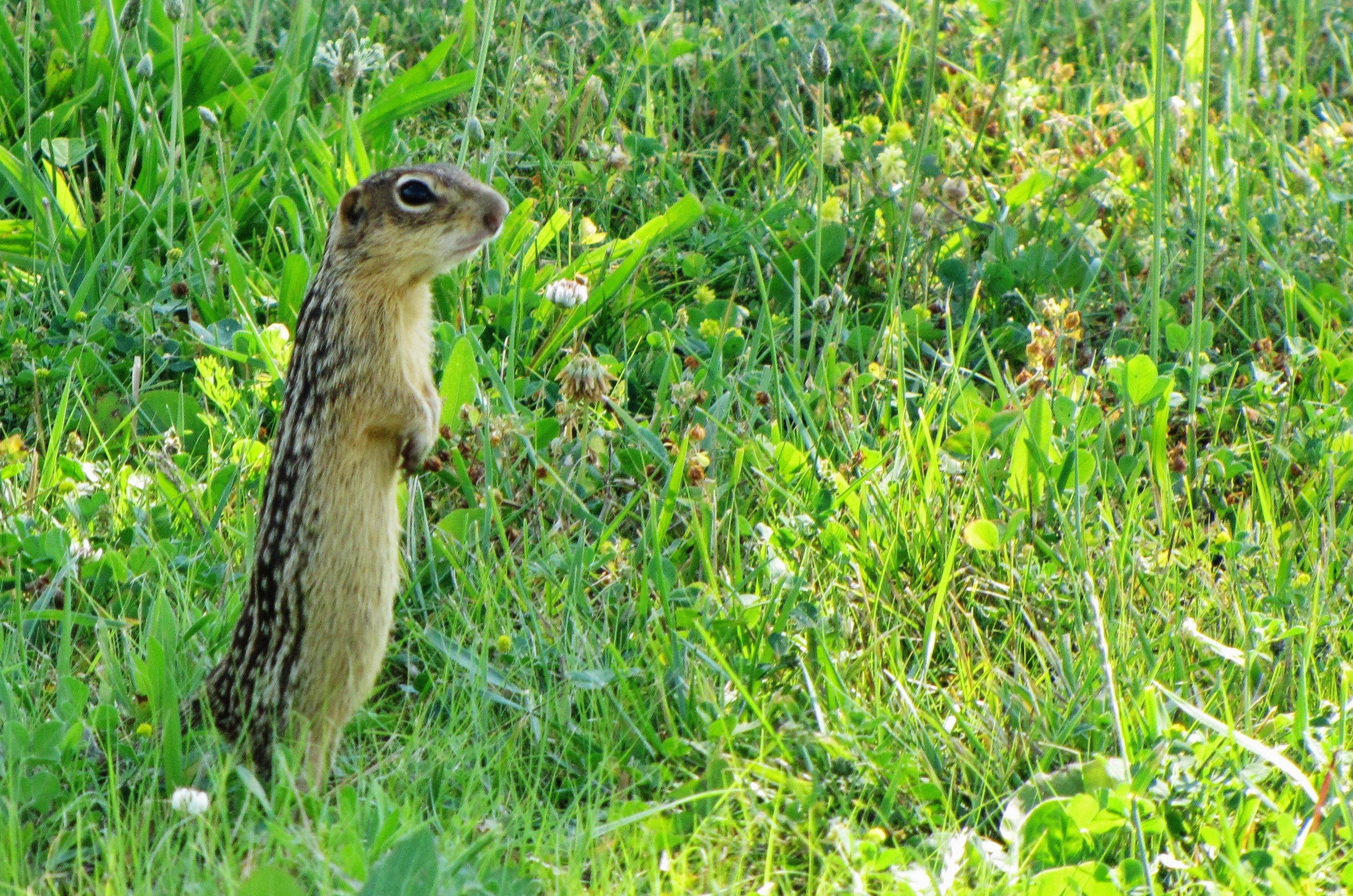 I was blissfully unaware of the existence of thirteen-lined ground squirrels (Spermophilus tridecemlineatus) living in Michigan, let alone in Oakland County, until a summer day ten years ago. On that day of discovery, I was wandering the Shiawassee Basin Nature Preserve in Springfield Township admiring wildflowers, dragonflies and butterflies in a small meadow. I was just a few hundred feet from the Springfield Township Civic Center when suddenly a small chipmunk-like creature popped up out of the ground in a field rich with clover, grasshoppers and bugs of all sorts. I managed one photo before its hyper-speed vanishing act commenced. 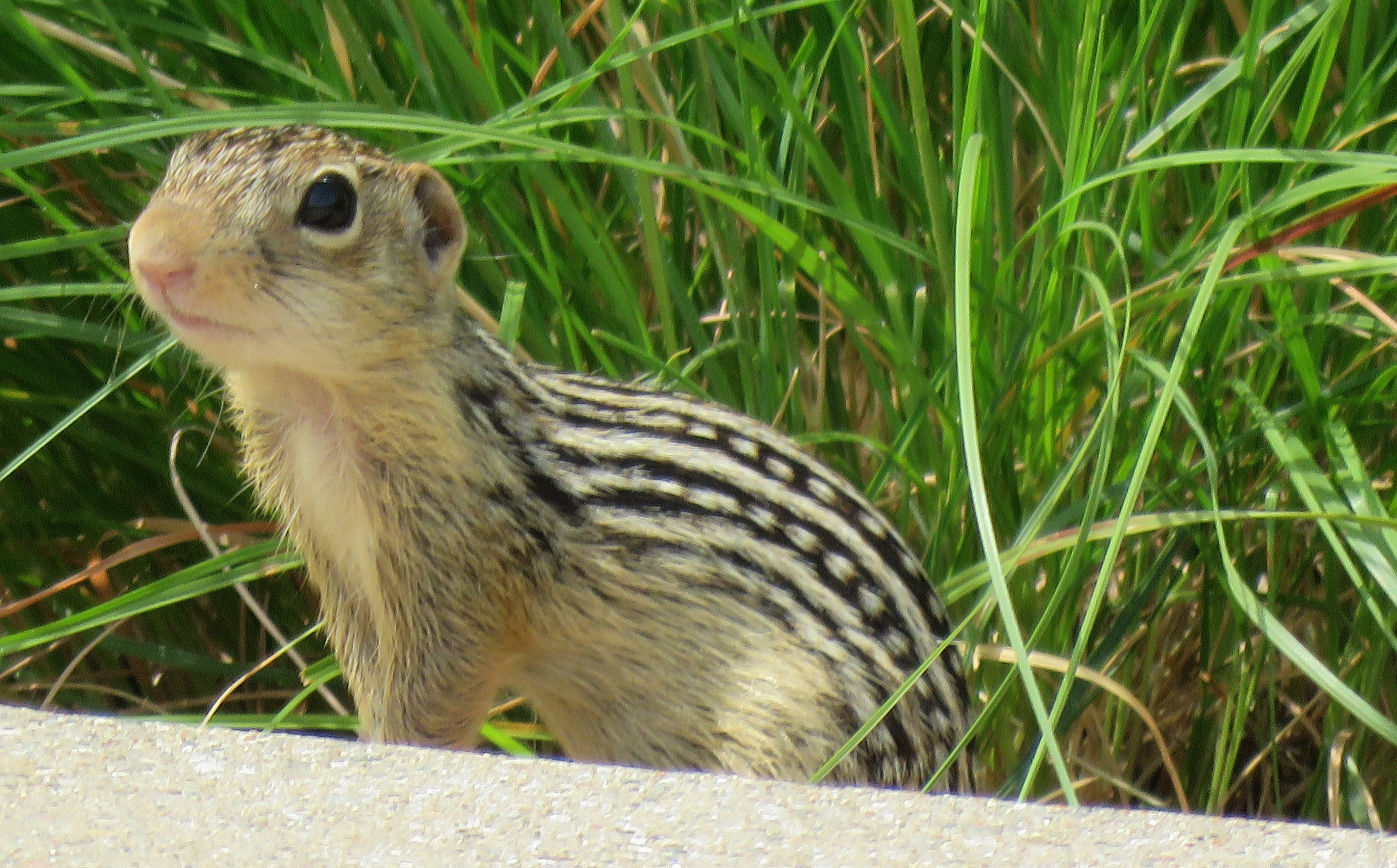 That was my first sighting of this small creature that originally occurred all across the expansive native prairies of the United States. I knew instantly it was not a chipmunk, but it took me a few minutes and a second look at the photo to realize that striped creature was a thirteen-lined ground squirrel: a slender rodent with a major cute factor. 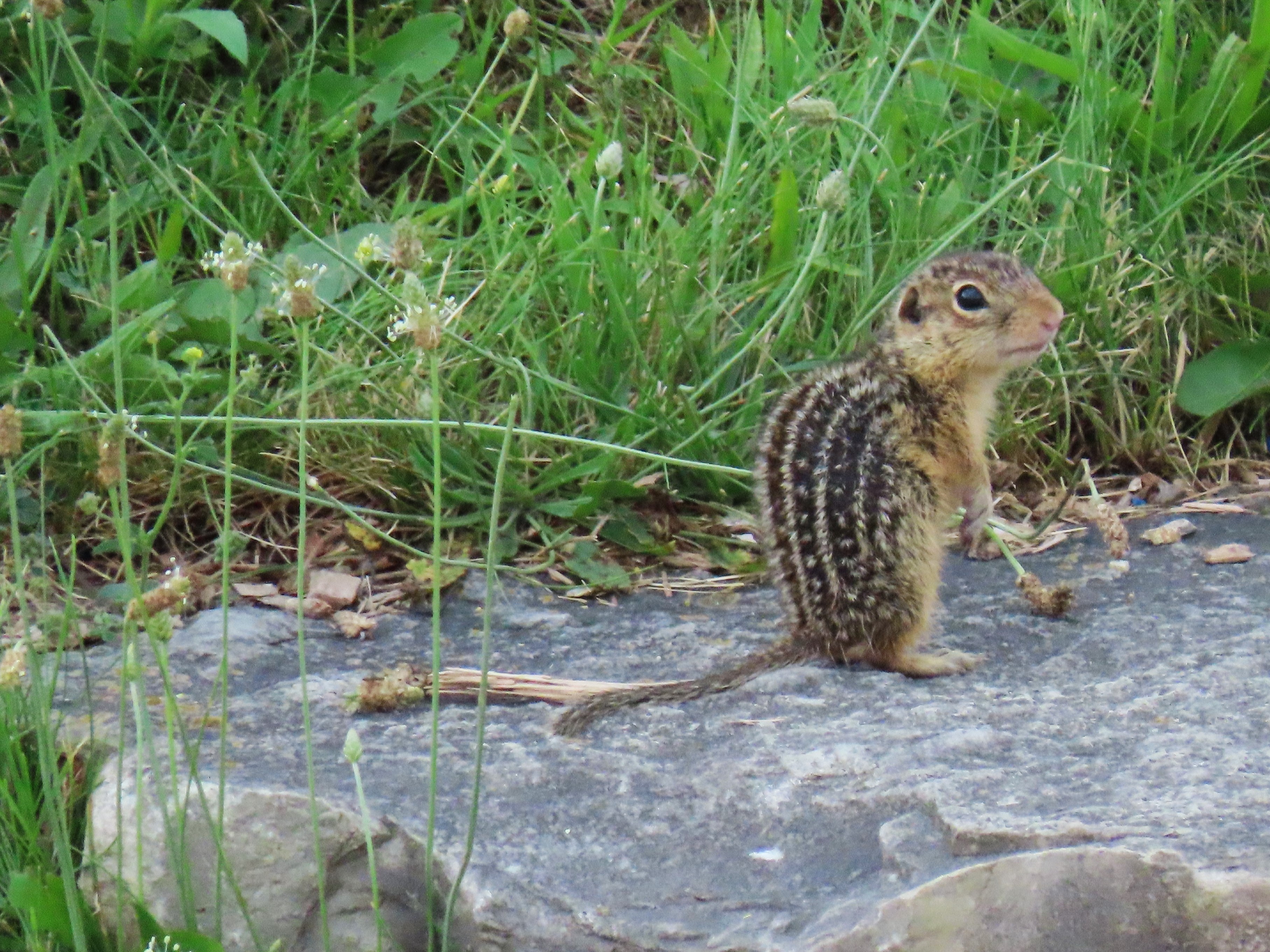 Three years ago this week I encountered another one, just a few feet from the entrance of the Environmental Discovery Center at Indian Springs Metropark while I was attending an outing with Oakland County’s Trail, Water and Land Alliance. It peeked up over the edge of the sidewalk, gave me a quick glance and disappeared; the very same day I saw another one at the edge of my rural driveway that abuts a wild meadow in Brandon Township. I never saw my driveway ground squirrel again, perhaps because of its superb camouflage and behavioral habitats, or maybe because ground squirrels are a favorite prey of coyotes, red foxes, weasels and hawks, and especially Red-tailed and Cooper’s hawks, all of which patrol the meadows and fields of our county looking for meaty morsels. 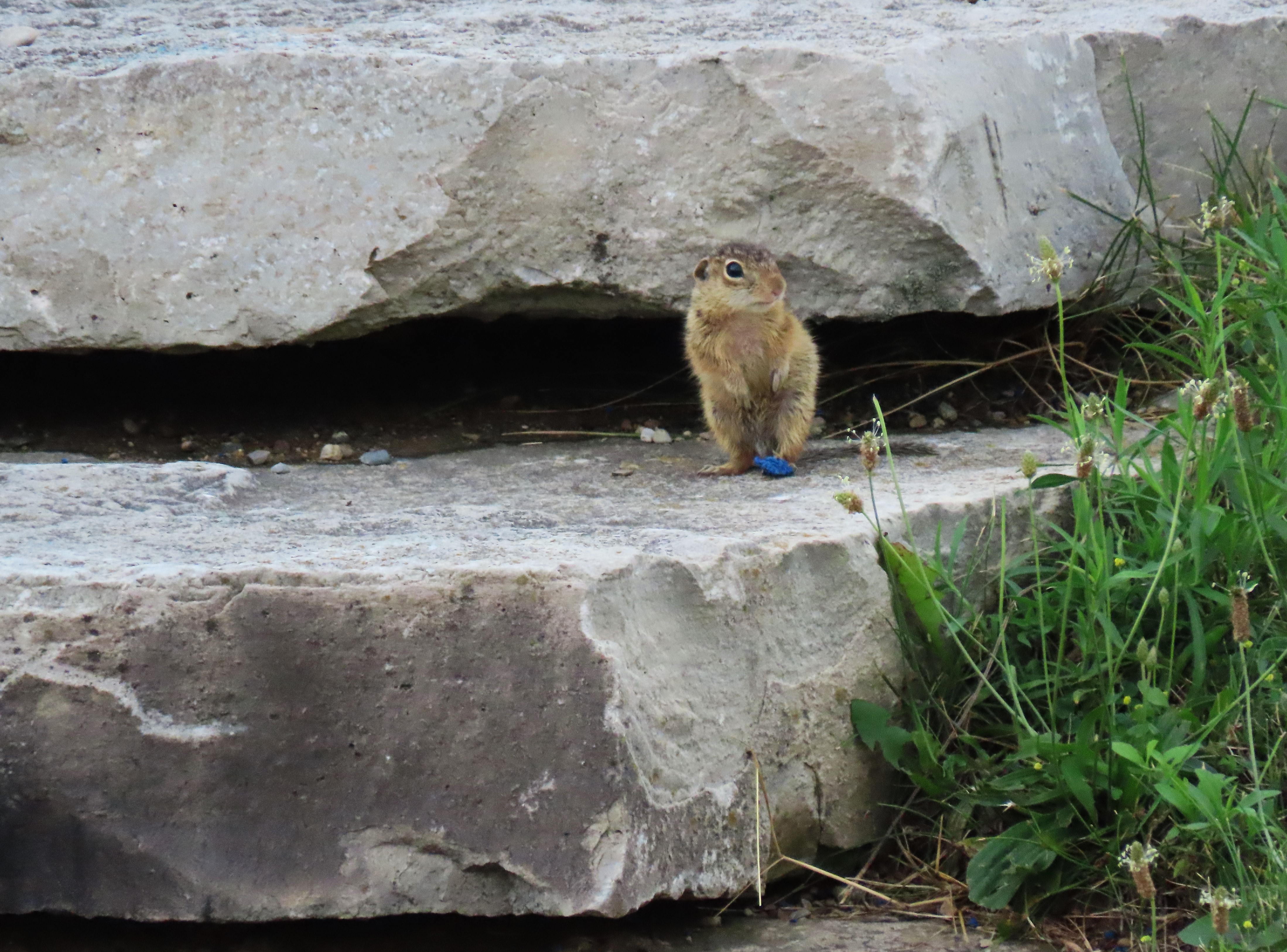 Fast forward to last week on an early morning adventure at Indian Springs Metropark. The birding hike I attended with the Oakland Audubon Society turned out to be a ground squirrel extravaganza for me, and my camera was at the ready on that sultry summer day. To be honest, two young ground squirrels scampering about as if participating in a game of hide and seek do not make an extravaganza, but they presented me with photo opportunities as the rest of the group hiked on. Their behavior also inspired me to do a bit of research on this species that has been expanding its range during the past few hundred years as forest lands have been cleared and altered for agriculture and human activities.

Low-grass areas found in cemeteries, parklands and open areas near airports and even mowed highway embankments all are attractive to these ground squirrels if soil conditions are right for digging, and a diversity of food is available. As I quickly discovered when spotting another ground squirrel away from the first two, the restored prairie habitat and adjacent golf course of Indian Springs Metropark is ideal ground squirrel habitat. 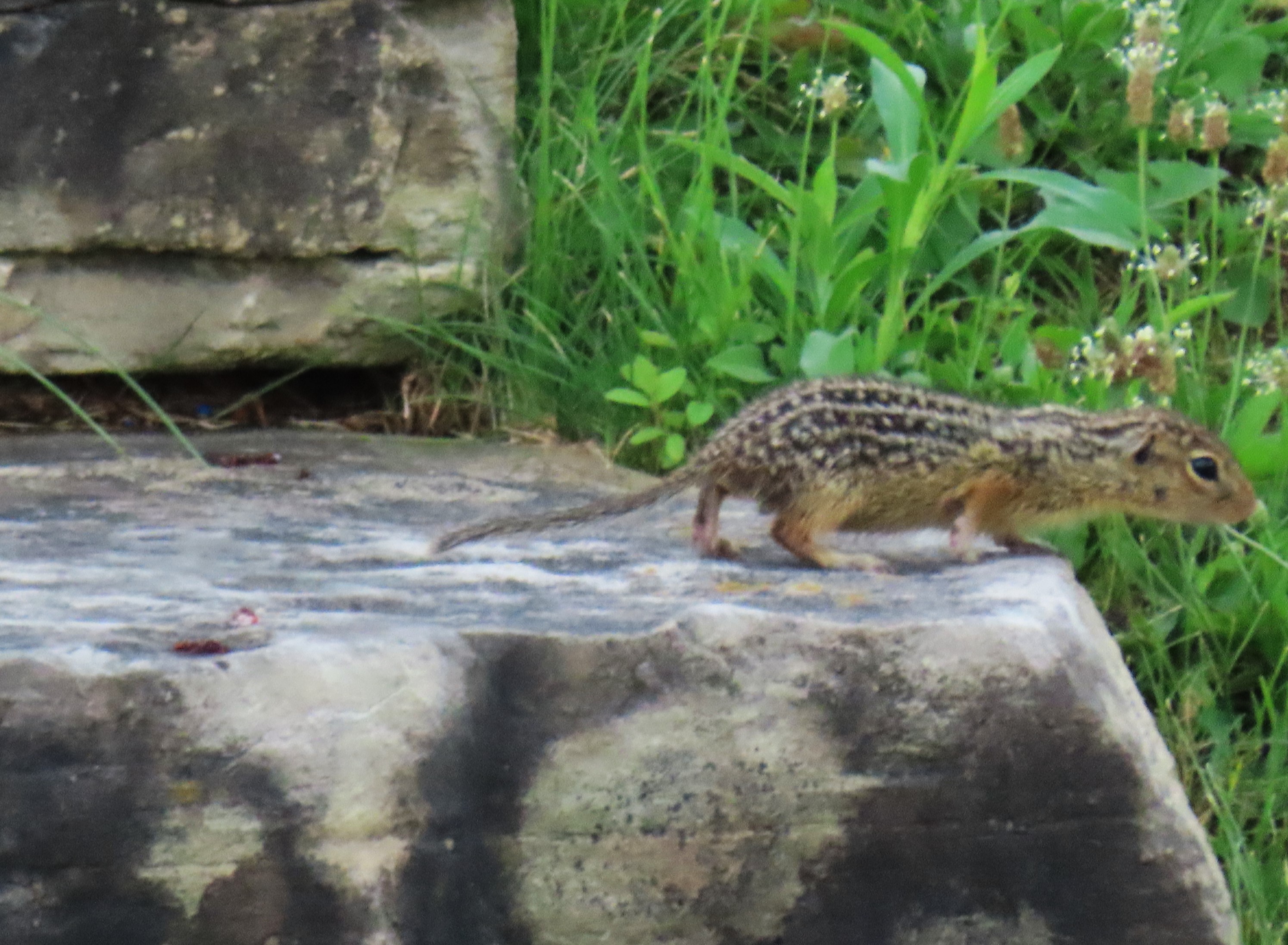 A few folks in the Audubon group noticed the thirteen-lined ground squirrels just as I did and misidentified them as chipmunks, a mistake that can be easily made unless paying close attention to their physical differences. Ground squirrels are sleeker and have 13 stripes down their backs that alternate between dark with white spots and narrow whitish stripes, while our eastern chipmunks have a single black stripe on the middle of their backs and three stripes on each side with a color pattern that goes black, white, black. 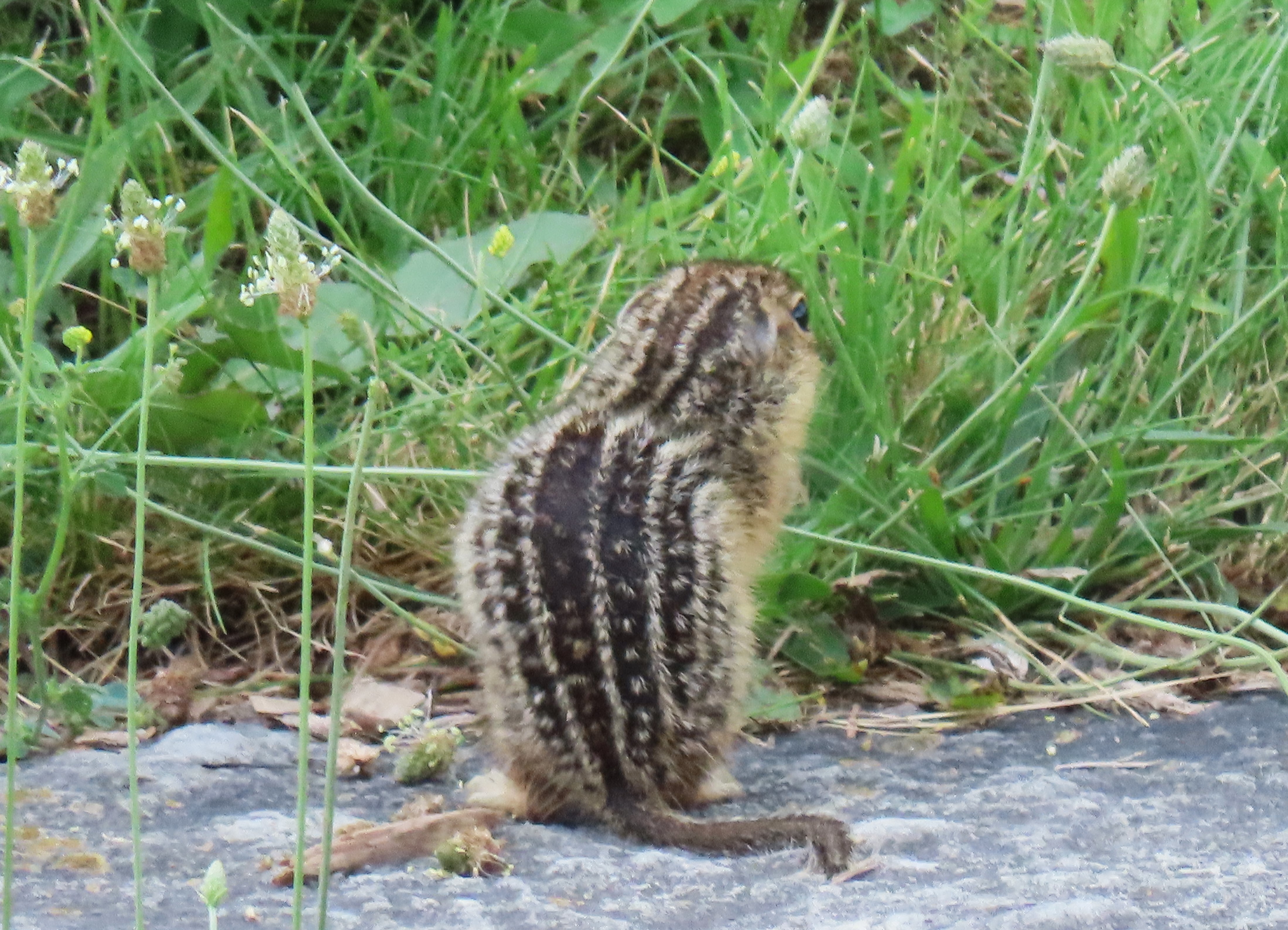 A few major behavioral differences can be used to tell them apart, including the fact that chipmunks are great climbers, while thirteen-lined ground squirrels stay on or beneath the ground. And perhaps most notable among behavioral differences is what happens in winter. Thirteen-lined ground squirrels are true hibernators and will never appear above ground in winter. Our chipmunks “catnap” and enter into brief “torpid” states when their body temperature lowers and breathing and heart rates slow way down, reducing the amount of energy required to maintain life. Those periods of torpor may last from a day or two to a week or longer, but they occasionally come topside in winter and are not at all a rare site feeding in snow under an Oakland County bird feeder.

Here are some other ways to differentiate between the two species:

The pair of thirteen-lined ground squirrels I watched were scurrying about the stone steps of a play area at Indian Springs in a short grass area not far from a restored prairie, a perfect habitat combination for them that included a gently sloped hill with easy digging to create burrows. A bit of after-the-hike research confirmed my assumptions as to why they were out and about in the morning sun. “Thirteen-liners,” a popular nickname for these ground squirrels, are most active on sunny days when the temperature climbs into the 80s and above. The temperature range may have to do with their feeding preferences which include grasshoppers and other insects, as well as small snake species that are moving about on sunny days. They also feast on vegetative matter and fruits and seeds that are abundant in Oakland County. 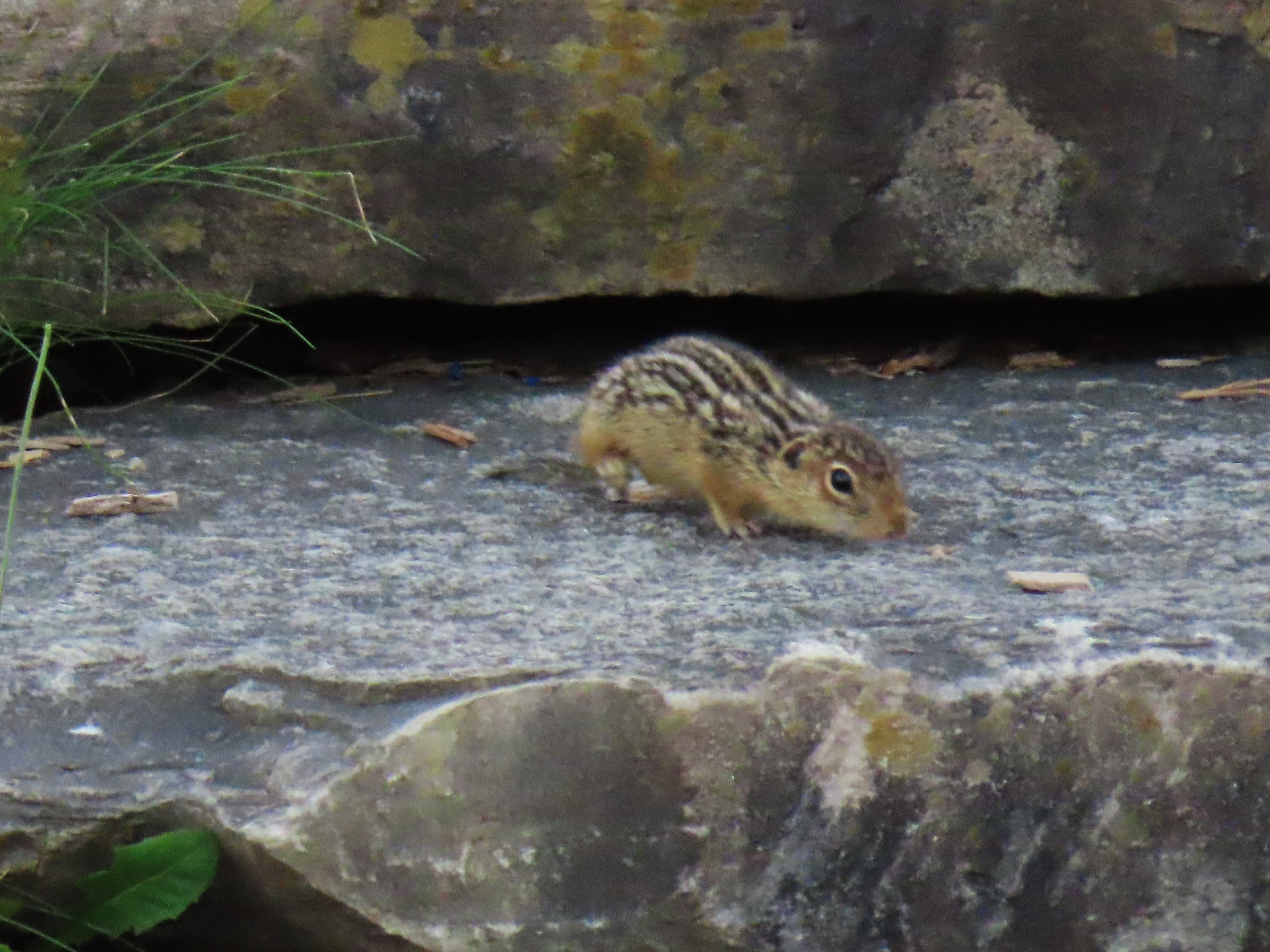 Don’t expect to find these wary creatures easily; for even though they have expanded their range, they are very alert and will retreat to a burrow if they sense danger. They never stray far from their burrows, which may be fifteen to twenty feet long with multiple inconspicuous entrances. After patiently watching the pair at Indian Springs, I finally detected one of their entrances. As for that exact location I chose to leave it undisclosed, for that seems to be the right thing to do. I will say this: their house keeping skills removed the dirt that would have exposed their subterranean entrance. If you are so lucky as to stumble across one of these beautiful “thirteen-liners” at Indian Springs, or elsewhere on the wilder side of Oakland County during the sultry days of summer, just don’t call it a chipmunk. 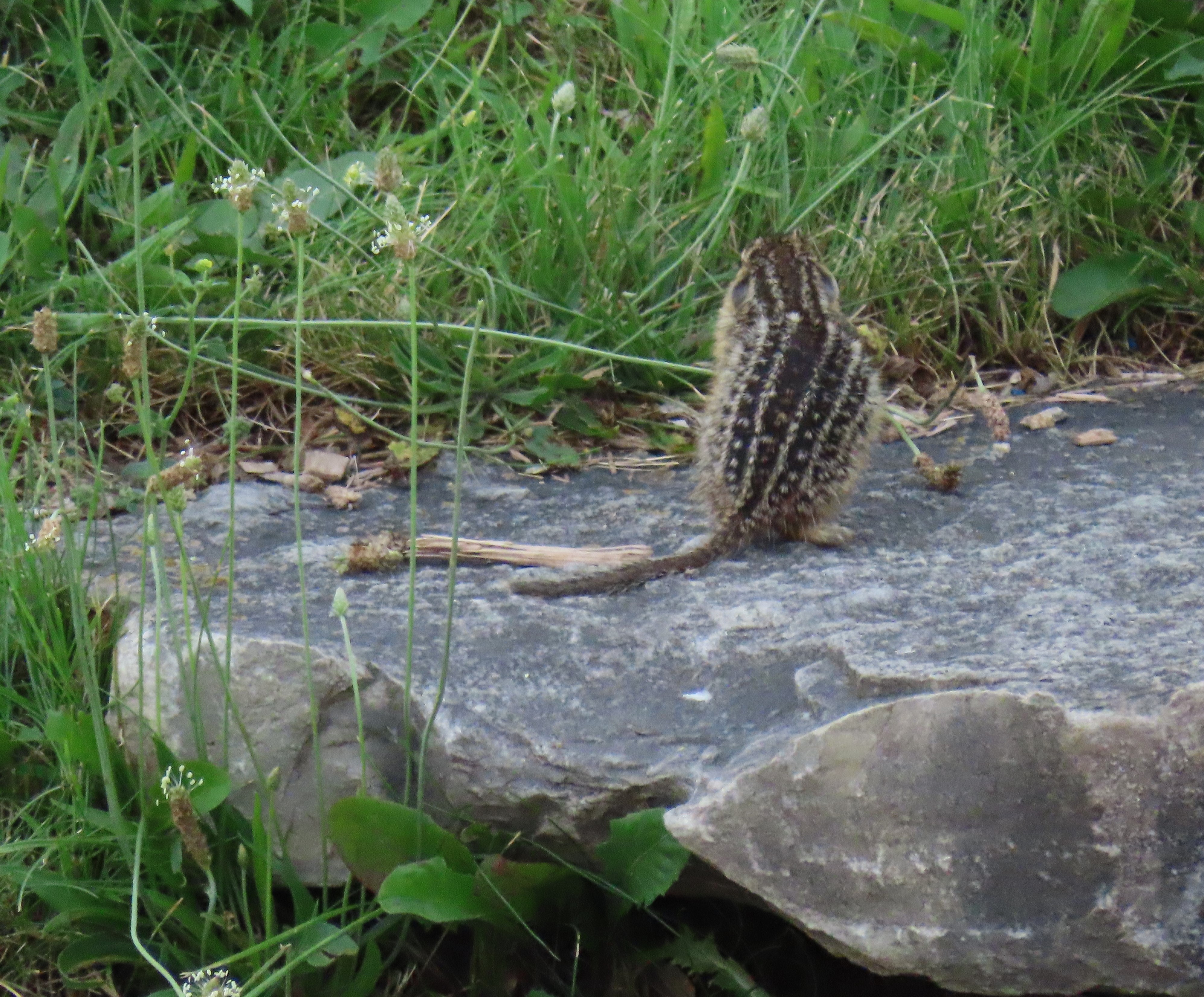