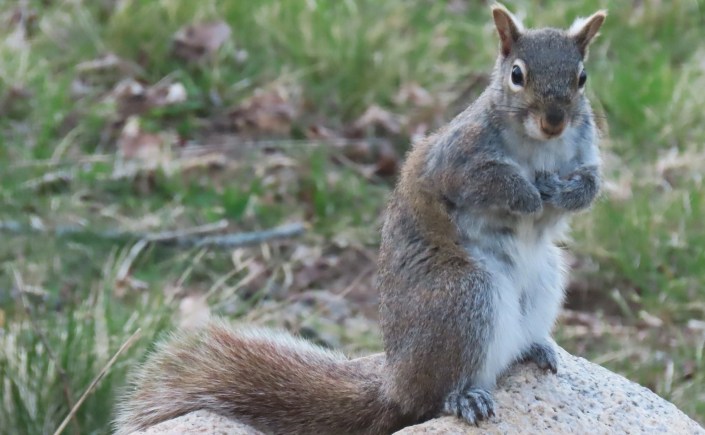 An unexpected encounter last month, while inspecting my Screech Owl nesting box, served as a reminder that assumptions of any kind may be wrong, especially when it comes to less-than-attentive observations of nature’s way. I had assumed the nest box to be empty since I had not noticed any activity, nor had I heard any of the whinny-like nighttime and territorial trills of this rather common cavity-nesting species of owl.

The moment I opened the nesting box, an adult eastern gray squirrel (Sciurus carolinensis) exploded into vocalizations from an adjacent tree where she was resting on a branch in the late afternoon sunshine. I had photographed her there several times before and never thought much of her sprawled-out presence, but I had noticed she seemed to pay attention to my wanderings. The reason for her dramatic change in behavior became instantly obvious, for within the nesting box was a squirming baby squirrel laying in a bed of dried grasses.

I snapped one photo of her furless newborn and closed the nest box door as mom squirrel raced up the tree and around to the other side of the nest box. My hasty escape down the ladder side of the tree followed. I offered the distraught mom verbal apologies as she continued to chatter loudly and chastise me with her rapid back and forth tail-flicking before she hurriedly entered the nest box. I took the tail-flicking as a message to stay away, my first attempt at deciphering the body-language communications of squirrels.

I decided it was time to explore more about these masters of adaptation, with the owl box incident serving as a reminder that one of the behavioral characteristics of gray squirrels is their ability to adapt to human behavior. The eastern gray squirrel is certainly very much at home in Oakland County. They do more than survive in our midst. They thrive. Habitat to their liking is found all across the county from the bustling streets of Ferndale, on the border with Detroit, to the wilder side woodlands of the Ortonville Recreation Area, at the northern tip of our county.

The morning after the nest-box encounter, the squirrel resumed her pattern of visiting my array of bird feeders to feast on black-oiled sunflower seeds. Several weeks have passed and my double-tube feeder attached to a bay window, which I had deemed as “squirrel proof,” remains her favorite dining location. I knew it would be “squirrel proof” when I first installed it during winter since it was attached to the middle of a window with suction cups, and squirrels can’t climb on glass. “Squirrel proof” turned out to be another incorrect assumption of mine.

She would climb a tree on the side of my house and then leap from a branch onto the porch roof. From there, she scurried to a point above the bay window, and that was followed by another quick leap down to its roof. Her acrobatic skills came into play next. She would hang upside down from the edge of the bay window roof and swing back and forth until the angle was just right to land on the roof of the tube feeder. She’d then crawl in and flip around with her tail hanging out. Sometimes she made it in one leap, and sometimes she missed and would then repeat the process to reach the bountiful and nutritious treat.

Gray squirrels have certainly stirred my sense of wonder with their gravity-defying acrobatics that far exceed anything the most-skilled human gymnasts or rock climbers could dream of accomplishing. But then again, squirrels have sharp, hook-like claws on all four paws, designed for clinging to bark, and a large bushy tail that helps them balance and steer when leaping from branch to branch.

A bit of research also revealed their secret anatomical superpower that helps them reach seemingly-unreachable food sources. They have swiveling ankle joints that allow them to rotate their hind feet 180 degrees. That amazing adaptation allows them to descend head first down a tree or attach themselves to the ledge above my tube feeder, with their hind feet pointing backwards before making a final leap to their target.

If you’ve read this far, I presume you watch squirrels and may be thinking “I saw black squirrels doing the same kind of things as the gray squirrels.” I’ve had friends send me photos of black squirrels and ask me what kind of squirrels they might be. In Oakland County, and much of the northern sections of the Midwest and neighboring Ontario as well, eastern gray squirrels commonly occur in two color phases: gray and black. This sometimes leads people to mistakenly believe they are two different species. They are not. Some researchers believe that the black coloration of eastern gray squirrels is a sun-absorbing adaptation in regions where “winter” means months of snow and periods of extended cold. To add credence to that theory is the fact that black-colored gray squirrels are not found in the southern United States.

The eastern gray squirrel is not a picky eater and definitely is an opportunist. My observations clearly confirmed that black-oiled sunflower seeds were tops on the winter treats list, whether the seeds were in a feeder or buried under snow.

In early March, they are sometimes noted licking at sap oozing from broken twigs of sugar maples. When spring takes hold, their diet expands greatly. In April, tree buds and freshly planted bulbs are favorites, along with emerging mushrooms and fungi of all kinds. By the time May arrives, their more carnivorous behavior kicks in with large insects, caterpillars, bird eggs, and hatchlings becoming entrees. When summer draws near, their diet expands even more. They raid gardens for veggies and fruits to their liking, with black raspberries being a favorite as this gray squirrel near my porch last summer clearly confirms.

This summer may bring a special crunchy feast of extreme abundance that lasts almost a month, with the expected dramatic emergence of millions of Brood X cicadas that have been burrowed underground for the past 17 years, feeding on sap from tap roots. Now, after 17 years of darkness, they will see the light of the day above ground, especially in the Ann Arbor area, ground zero for emergence in Southeast Michigan. The arrival of autumn will signal it’s time to hoard nuts of all kinds, with acorns being an OAKland County favorite, followed closely by the fruits of shagbark hickory and black walnut trees.

Unlike red squirrels, which have a habit of gnawing into attics and outbuildings for nesting areas, gray squirrels tend to make their nests in the upper branches of hardwood trees. Those leafy structures are technically known as dreys and are well hidden by leaves during the summer months, but are easy to spot in the early days of spring. They may appear to be haphazardly built, but that’s another false assumption. They are constructed of leaves, twigs, and grasses, added in layers, that protect against the elements and high winds. When winter arrives, many gray squirrels seek out the hollows of trees as snug homes or other sheltered sites, and perhaps that was the case with my screech owl nest box that was transformed into a secret nursery.

Life may seem easy for gray squirrels when it comes to finding food, but many meet their end in the talons of red-tailed hawks during their daily food forays. Others fall prey to red foxes, eastern coyotes, and feral or domestic house cats. Gray squirrels are also a favorite quarry for small game hunters in our State Recreation Areas. Road crossing is a challenging and often fatal event, but some squirrels cross above a road in urban areas by tightrope walking power lines, with the tail helping to balance.

Human actions, such as the placement of feeders and bird baths, can change the behavior of gray squirrels, but gray squirrels may have actually changed the course of history back in 1776. A widely-shared story is the relationship of gray squirrels to the defeat of the British redcoats during the Revolutionary War. Legend has it that we owe our liberty to gray squirrels because our rag-tag army of colonists, pioneer farmers, and minutemen developed excellent marksmanship skills by hunting gray squirrels for the dinner table as they leapt about the branches of the hardwood forests in what is now the northeastern United States. That marksman skill was put to use and, in a small way, may have led to the defeat of the British and the birth of 13 independent colonies as a new nation.