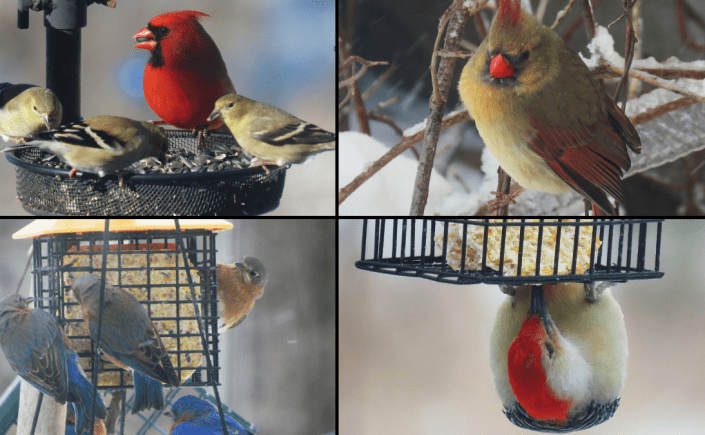 As I write these words, I’m watching about a dozen species of birds flitting about my bird feeders, seemingly unaffected by wintry blasts of cold air as the temperature once again slips into single digits in Oakland County. Other wildlife species have different winter survival pathways. Some hibernate, migrate or simply acclimate to the conditions on hand.

Woodchucks hibernate underground, blissfully unaware and unaffected by single digit temperatures. White-tailed deer have a winter coat with hollow hairs that insulate them when sleeping in snow. Nature has winter plans for all creatures, with the wood frog’s plan being the most amazing. They survive winter in a process that sounds bizarrely fictional. They wiggle under decaying logs and burrow into the earth  and turn as solid as a block of ice, with no heartbeat and no respirations for months on end, with their cells protected by their version of antifreeze. In spring they thaw out, wake up and hop to their vernal ponds to mate. The National Park Service describes that amazing survival strategy process as a biological miracle.

But what about birds? They’re warm blooded creatures, many of which weigh barely an ounce and need to maintain an internal temperature of approximately 105 degrees. Sometimes I wonder why they did not all follow the lead of nectar sipping ruby-throated hummingbirds that migrated to Mexico or Costa Rica as summer waned. Osprey, which feed exclusively on fish, are long gone too. Birds require more food during extreme winters in order to have enough energy and fat to keep themselves warm. Puffing up their feathers helps keep them warm, a survival adaptation that overwintering robins use, but the simple answer is that if a bird’s food supply is available locally, they do not have to burn up energy flying a few miles or thousands of miles and run risks of predation and severe weather.

Foraging for food when branches are icy and snow is deep would appear to be a formidable challenge for most birds, especially the smallest ones, but nature finds a way through evolution, adaptation and survival of the fittest. The common black-capped Chickadee that weighs in at half an ounce, the tufted titmouse at three-fourths of an ounce, and the Eastern bluebird, a “heavy weight” of the tiny feeder birds weighing 1.1 ounce are all winter hardy species. Adapting to conditions is their key to survival. They thrive in winter with or without the assistance of bird feeding stations, but reliable access to bird feeders makes life easier.

If you read about birds, you may have already discovered that your real life bird observations disagree with written “facts” about birds and migration. When that’s the case, always believe the bird, not the book. Henry David Thoreau once penned, “The bluebird comes and with his warble drills the ice and sets free the rivers and ponds and frozen grounds.” That statement no longer holds true. Many Eastern Bluebirds have adapted to life in Oakland County and forgo migration. They readily take to suet as a substitute for insects and are regular visitors at my feeders all winter.

Sandhill cranes and Canada geese are considered migratory, but some forgo the journey finding suitable habitat and food sources even during winter. Last winter I had a pair of sandhill cranes that would make occasional appearances under my bird feeders. I’ve also seen cranes strutting in snowy fields of corn stubble and ‘lounging’ at Addison Oaks County Park.

When it comes to winter bird feeding, there are no hard and fast rules, however, the establishment of winter feeding stations can be controversial. There are risks, but there are simple steps that bird lovers can take to minimize those risks. I feed birds all winter and will continue to do so until about the time maple sap drips, unless a local disease advisory is posted, as was the case in the Pacific Northwest back in March 2021.

Once a feeding station is established, birds will come, with one big “if.” If the species you hope to attract are not naturally in your local area, they are not likely to suddenly appear. They have no way of knowing a new “restaurant” has opened. Habitat must also be attractive for them, and nearby trees and shrubs greatly increase the chances your feeders will be a hot spot of avian activity. My feeders are located adjacent to my unkept front yard meadow and a few dozen yards from the branches of trees. Those habitats give them a safe place to shelter and survey the scene, and sometimes bask in the sun before flying in for a meal.

Offering a variety of seeds, and suet as well, and having different types of feeders will make your site more welcoming. My winter feeder guests include Eastern bluebirds, downy and hairy Woodpeckers, goldfinches, house finches, Black-capped chickadees, bluejays, cardinals, mourning doves, red-winged blackbirds, and tufted titmice, along with a few overwintering robins. The super star is a male red-bellied woodpecker that makes regular visits to a suet feeder.

Tracks in the snow, personal observations, and trail camera captures give me evidence that a bird feeder almost always attracts unintended species. High up on the list are free-roaming cats and Cooper’s hawks, both of whom would like a bird for a meal. I have also noted fox tracks under the feeder, and a red-tailed hawk sometimes perches about 100 feet away and surveys the scene. I think the red-tail has its eye on the gluttonous squirrels that gorge at the feeders. A night vision trail camera reminds me coyotes come in to feed too; not on the seeds or birds but for mice and rabbits that harvest the spillage.

Bird feeders sometimes provide unexpected evening entertainment for cats. I have a nature-passionate friend whose cat will sit by a window for hours and watch an opossum scrounge for seed spillage inches from the window. I do believe they have become friends and accept each other’s presence calmly.

What’s the best thing to feed birds in winter? That question comes my way frequently. The bottom line is wild birds really do not need to be fed, but once you start regular feeding in winter, you should continue, since they appear expecting to find a meal. Black-oiled sunflower seed is a favorite. It has a higher fat content than striped sunflower seeds and is sometimes referred to as the hamburger of the bird world. Chickadees, cardinals, and woodpeckers love them. Suet is an excellent source of energy. Some butcher shops will still give or sell you a hunk of raw suet/fat, but I buy the commercial blocks, and they do not go unnoticed by bluebirds. I also have a tube feeder that holds thistle seed and millet, a favorite of goldfinches.

Every once in a while I will smear peanut butter laced with small seeds onto a tree trunk which quickly attracts white-breasted nuthatches and downy woodpeckers, and whether I like it or not—squirrels. Little kids can make a fun feeder by putting seeds and peanut butter in a hollowed out grapefruit half and hanging it from a tree. It works as well as a pricey, state-of-the-art feeder.

I used to put cracked corn on the ground for doves and wild turkeys, but that became a deer magnet.  Deer that hunker down in my meadow a few hundred yards from my house discovered that when the old, squeaky garage door opens, I am restocking the feeders and they appear shortly there afterwards. They still do when I add sunflower seeds to the elevated feeders.

Bird feeding is never boring and often brings the unexpected. Come up with a plan, and for the most enjoyment, have your feeders where they can be easily viewed and refilled. Project FeederWatch from the Cornell Lab of Ornithology explores the types of food that birds in different regions enjoy. Your actions may even help some birds make it through the harshness of winter on the wilder or urban side of Oakland County.