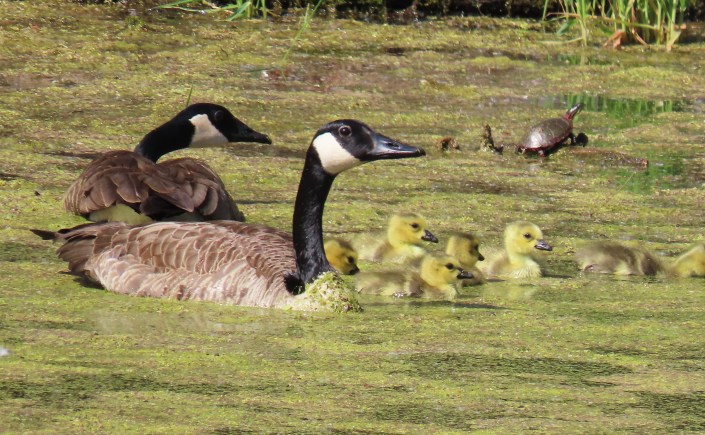 Not all Oakland County geese spend their days grazing out in the open on lawns, golf courses, the greens of schools and college campuses, and along the shorelines of our multi-sport lakes. Nor do all geese exhibit aggressive behavior when a human meanders too close to a nesting site that’s hidden in office-plaza shrubbery or along a popular and well-traversed trail. Some are more reclusive and head to secluded swamps and woodland ponds when it’s nesting time. This is their story and brings to mind the first sentence of Aldo Leopold’s classic book of nature essays, A Sand County Almanac (Leopold, 1949): “There are some who can live with wild things, and some who cannot.” I look to the woodland geese as wild things.

But first, a bit of fact-checking is in order on the seemingly endless conflict between Canada Geese and humans, which can be summarized with just ten words, “Canada Geese and humans are attracted to the same habitats.” According to the Michigan Department of Natural Resources (DNR), “In general, geese have benefited from the way humans have altered the landscape. Canada Geese are attracted to areas that provide food, water, and protection. Urban areas with lakes and ponds offer all the resources that geese need to survive.” Perhaps the DNR’s most telling sentence is, “Most human-goose conflict is associated with urban settings where manicured lawns are located in close proximity to water and molting geese.” Unlike other birds, which will lose one feather at a time and still be able to fly, geese will lose all of their flight feathers (or molt) and not be able to fly during this stage.

Easily-observed geese often nest near the shoreline cattails of our Huron-Clinton Metroparks and Oakland County Parks. Those locations provide cover, food sources, and a good sightline to watch for intruders or approaching predators.

The sunny day photos of young goslings below were all captured along the shoreline of 68-acre Crooked Lake at Independence Oaks County Park, where conflicts with humans are minimal. The geese there have become rapidly acclimated to human presence. If one walks slowly along the shoreline in the morning and stops often, as I did, photographing them is easy.

This year, one Crooked Lake goose nested on top of a beaver lodge, a semi-secure site with an excellent view of the surroundings that’s well protected from most terrestrial intruders with, perhaps, the exception of raccoons or mink. Another goose had her nesting site on top of a large muskrat lodge, just outside the park’s boundary, but within the Clinton River Watershed.

As to why some geese seek out far more secluded areas within woodlands, far away from lush grasses and bright sunshine, they are not telling. I suspect it’s all about their ability to adapt to what nature offers and take advantage of the great variety of quality natural habitats found within Oakland County. Most people don’t meander along a woodland trail with hopes of encountering Canada Geese under the dappled light of spring, but I am not most people.

I’m aware of several sites within a northern section of the Bald Mountain Recreation Area where geese raise their young, and the grasses of manicured lawns are never on the menu. This is the third year in a row that I’ve watched geese select the top of the same muskrat lodge for a nesting site. The pair coexists with the ducks and muskrats that share the pond. Although I did not witness the early days of their nesting, the incubating female would have formed a small depression on top of the lodge and then plucked some of her own downy feathers for a lining before settling in and laying her clutch of eggs, waiting for about a month for them to hatch.

The other Bald Mountain site I stumbled upon, quite by accident, while searching for spring wildflower emergence, is far more remote but provides numerous hummocks in a wooded swamp that would be ideal nesting sites for geese that shun golf course-type habitat. During my last stealthy approach, I noticed two motionless geese in yoga-like poses in the shady shallows as me and my friend passed by.

The location of my most-visited site for observation is on private land that I have visual access to. I stumbled upon it accidentally about ten years ago, and every year, the scenario that plays out is somewhat the same. Its small woodland pond is shallow and separated from another larger body of water by the remnants of an old berm that once was part of a trolley line in northern Oakland County. Last week, on the day the temperature soared towards the 80-degree mark, I sat at the top of the berm, late in the day as clouds formed, and watched goslings paddle about as I scribbled notes for today’s blog. Almost as if on cue, the goose family passed in front of a log where painted turtles basked in the fading sunlight, just in time to capture photos.

Goslings are precocial species and can swim, waddle, and feed right after hatching. I observed that duckweed really is a favorite food, not just for ducks, but for the newly-emerged goslings as well. For the first few weeks of their life, duckweed appears to be their main soupy meal, however, they peck at most everything they may encounter, including small insects in the water or on shoreline vegetation. The goslings are standouts in the duckweed-coated waters with their yellowish down making them easy to spot. As they paddled in their vegetative dinner, the goslings would stop often and feed, with the female goose staying in front and the male staying close behind.

Although the location is free of human intruders, wild threats in the duckweed pond for the goslings include Great Blue Herons, snapping turtles, and northern water snakes. If they wander too far along the grassy berm, they could fall prey to crows and Red-tailed Hawks. I’ll be making weekly visits to this site and know they will be growing quickly and rapidly, adding stems, shoots, roots, berries, and aquatic invertebrates to their diet. By the end of May, sprouting crops from a nearby field will also tempt them.

Unlike many waterfowl species, adult Canada Geese feed mostly on land. By June, geese across the county in all habitats will be spending sufficiently more time grazing in open spaces. Goslings will remain easy to spot since they will still be much smaller than the adults and will have a grayish coloration. By autumn, all “woodland and swamp geese” will be feeding extensively on grains and grasses before it’s time to migrate, along with their more suburban and urban kin that favored golf courses and all-sport lake shorelines for their habitat.

With the day coming to an end, I stopped scribbling thoughts and wandered along the old berm for about a quarter of a mile to another swampy woodland area. I was just in time to watch a pair of Canada Geese descend rapidly for a rather dramatic water landing just yards away from me. They then dabbled quietly in the shallows for a final meal before darkness fell on the wilder side of Oakland County.

2 thoughts on “Geese on the Wilder Side of Oakland County”