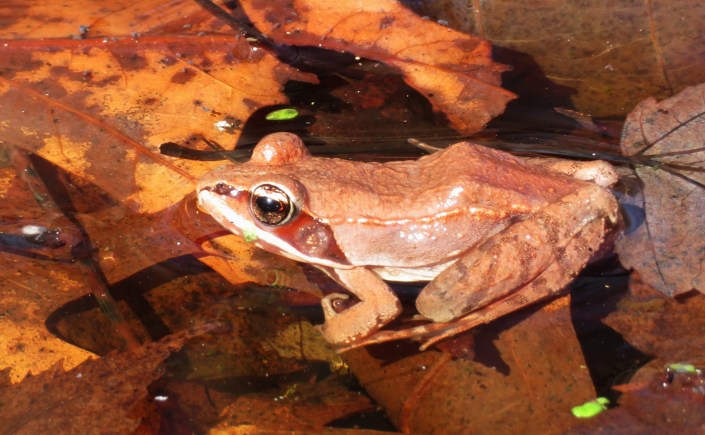 We knew winter really was over and spring was firmly taking hold on the wilder side of Oakland County when my hiking companion and I unexpectedly encountered an ancient amphibian ritual deep in the woods of Bald Mountain Recreation Area. Although light rain fell the evening before, the sun was shining. Only a few, very small remnants of snow remained on north facing slopes of the glacially sculpted, wooded hills, and the temperature had just reached 55°F. Those environmental conditions were perfect for the encounter that was about to occur.

We would have missed the ritual entirely if not for an enticing, and far from subtle, duck-like quacking chorus of “come hither” that lured us off our woodland trail trek. After just a few dozen feet of walking off trail, we were positioned perfectly to witness the courtship behavioral patterns of hundreds of wood frogs (Lithobates sylvaticus) that were far from shy and ignored our presence. Their presence, however, would not have been noticed in the shallow vernal pond had they remained silent, but silence during courtship is not in the wood frog’s playbook.

Vernal ponds are different from year-round ponds. “Vernal” references spring, and vernal ponds usually appear at winter’s end when woodland hollows and low areas fill with water from melting snow, spring rains, hillside runoff, or rising ground waters. In addition to providing breeding habitat for wood frogs, vernal ponds are critical habitat for salamanders and invertebrate species, such as fairy shrimp, with life cycles that have adapted to this temporary phenomena of nature’s way. By mid to late summer, vernal ponds are usually dry, and that offers a safety bonus for wood frogs not found in year-round ponds; fish can’t survive. The absence of fish increases the chances that adult wood frogs, their eggs, and tadpoles will all survive.

The name wood frog sometimes confuses people. “What kind of frog?” is a comment I have heard more than a few times. Wood frog behavior bears little resemblance to the behavior of two frog species we all know, the green frog and the bullfrog. Wood frogs are abundant, but these well-camouflaged amphibians are seldom seen since they live in our forests and wildlands for about 50 weeks of the year. However, when early spring environmental conditions stir them into breeding behavior, they are one of the most often heard. They still remain seldom seen, unless you are in the right place at the right time. Even then, they are well camouflaged amidst sunken leaves in vernal ponds.

We were lucky, and our presence, just yards from the small pond, seemed to go unnoticed by the frogs, but humans were not on their mind. I felt my pulse racing and my hand shaking as I tried to focus the camera on the closest frog couple, with perhaps a hundred or more right behind them, swimming and emitting their loud duck-like quacking, for that is the way of the wood frogs. Bright sun reflecting on the surface of the water made photography a challenge, and very few of the frogs stayed still for our cameras.

I discovered something else while watching the frogs. Unlike toads, spring peepers, and other frogs that have just one vocal sac under their throat that inflates and deflates to create their mating calls, the wood frog has two paired sacs located behind the head on each side of the body that almost resemble floatation devices.

It was easy to watch the males inflate their air sacs to create duck-like quacking since some were swimming just yards away.

Rain the night before our hike, and the temperature breaching the 50°F mark was the catalyst for action, and action there was, for there was nothing subtle or modest appearing about the mating behavior of the wood frogs as the males tried to mate with anything that moved. My herpetologist friends confirmed what I observed and I have heard from other naturalists that males are unable to identify a potential mate by smell or sight so they simply swim up to and clasp onto any potential partner. If the male grabs onto another male, he is unceremoniously kicked off. Although I have never witnessed it, I’ve heard tales of wood frogs trying to mate with a turtle’s neck, a toad, a salamander, or even a human finger dangled enticingly and wiggled in the water. Silent females arrive in larger numbers around dusk and successful mating behavior accelerates.

When nature’s way takes its course and the male successfully connects with a female, their mating behavior is known as amplexus. The male clasps onto the female’s back and holds on under her “armpits.” Apparently, the clasping stimulates the female to release her eggs and then the male to release sperm into the water at the same time. With several thousand eggs being released into the vernal pond, survival past the tadpole stage is excellent. Once the eggs are deposited, the adults hop back into the woods to resume their woodland solitary life, thus their name: wood frog.

I contacted my herpetologist friend Jim Harding for comments and he confirmed my assumptions and added facts in more scientific terms:

“I’ve always found interesting the Wood Frog’s “explosive” breeding cycle and (usually) very narrow window of active breeding. They are normally only at peak breeding activity for a week to ten days in late March to early April, then abruptly taper off. The other interesting thing is the “free for all” behavior of the males – rather than calling from one site like many frogs, the males move around and amplex anything that looks remotely like a Wood Frog. Unfortunately at any one time the males will outnumber the gravid females, so success is not assured for all. Once in amplexus, the female carries the male to the deeper part of the pond for egg laying along with other pairs, so that most eggs are laid in a rather small part of the pond.”

Although these small, well-camouflaged frogs are often overlooked in their natural habitat of the forest floor, they are easily recognizable by a black mask on their face which is sometimes described as a “robber’s mask.” Their terrestrial life consists of hunting for worms, millipedes, beetles, snails, slugs, and other small invertebrates they find under or on leaves and fallen logs, and avoiding predators which include snakes, raccoons, opossums, skunks, birds, coyotes, and foxes.

Summer-like heat may accelerate the end of this year’s wood frog courtship, except perhaps for a few stragglers who missed the big event. However, their courtship rituals may still be going strong in the northern Lower Peninsula of Michigan and across the Upper Peninsula and Canada for two or three more weeks since it is climatic conditions and not the calendar that controls their behavior. The wood frog is even found north of the Arctic Circle, further north than any other North American reptile or amphibian, which raises a question.

How does a wood frog survive winter? The answer is simple, but rather amazing. They transform into “frogsicles.” The process starts in Oakland County at about the time frost appears on pumpkin patches and hours of daylight dramatically shorten. It’s time then for our wood frogs to simply crawl under a log or a thick carpet of fallen leaves and that’s where they remain until the first rains of the next spring. Wood frogs have perfected a cryogenic freezing process by creating a natural “antifreeze” that prevents intracellular damage. Their heart stops beating, breathing ceases, and they are rigid all winter with no apparent sign of life and no awareness of the world above. But when nature stirs near the end of winter and snow melt fills vernal ponds once again, they thaw out and hop off for these ephemeral waters to complete their cycle of life anew.

As you read these words in the second week of April, the annual mating ritual is coming to an end. If you missed it this year, mark your calendar for the third week of March 2022 and wait for environmental conditions to tell you it’s time for wood frog courtship to resume in our protected Oakland County vernal ponds. It’s one of the finest watchable and audible frog events of nature’s way.