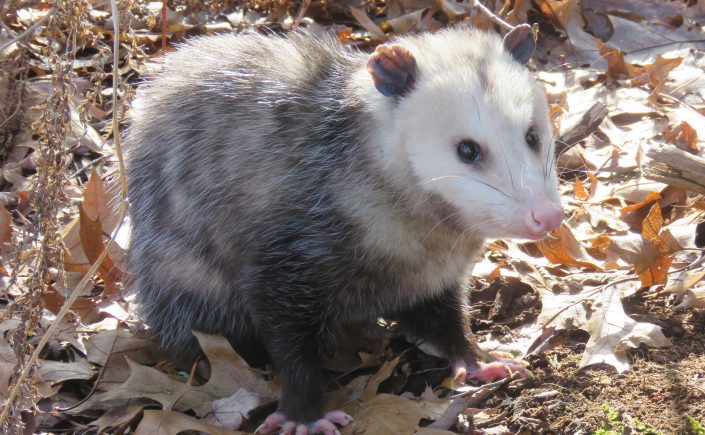 Our perception of reality when it comes to understanding wildlife behavior is often not the same as the actual reality. Sadly, that fact combined with our preconceived notions about a species often prevents us from understanding the facts as they truly are. The opossum is near the top of the list of our most misunderstood, maligned, and at times, feared creatures. In reality, opossums should be among the most loved creatures that not only share our urban, suburban, and rural habitats, but also thrive in them. They are guardians of our health and warriors against one of the most troublesome creatures in our midst, ticks.

The National Wildlife Federation, as well as other organizations, state that opossums are the furry unsung heroes in our endless fight against ticks and Lyme disease. Opossums also meander our gardens and orchards, consume over-ripe fruits that attract yellowjackets, and consider slugs, snails, mice, and rats as tasty treats.

Even when those facts are understood, some humans still succumb to their perceptions. They ignore reality and express their disdain for opossums when one is spotted in their car headlights on a summer night or meanders about under a bird feeder on a sunny winter day on a cleanup patrol. I’ve heard more times than I wish to recall words along the lines of, “We hate them,” or comments akin to, “They look like oversized filthy rats.” Sometimes, the falsehood of them being common carriers of rabies is added for good measure. The fact of the matter is, opossums are one of the least likely creatures to carry rabies and they are not related to rats. The Opossum Society of the United States website states:

“Despite its appearance, the opossum is not related to the rat. In fact, the opossum is a marsupial, or “pouched” mammal, and is therefore related to other marsupials such as the kangaroo and the koala. Like kangaroos and koalas, infant opossums stay inside the mother’s pouch to nurse and develop. The opossum holds the distinction of being North America’s only marsupial.”

Opossums have some pretty amazing features, including 50 teeth (more than any mammal in North America), and a prehensile tail that can be used to carry materials. I was thrilled to discover one of my motion-activated trail cameras on the wilder side of our county captured just that.

They also have some odd reproductive and behavioral habits – odd for humans that is – that include the ability to play dead rather convincingly. They are excellent climbers and will take shelter in a tree to escape a predator, or a bothersome nature writer with a camera. Unlike myths lead us to believe, they do not dangle by their tails.

Winter can be challenging for opossums in Michigan. We are near the northern range for this southern creature and they lack traditional winter survival attire such as the thick fur coats and fur covered ears and tails that protect raccoons, foxes, and coyotes. Many opossums die in winter, and in spring the survivors often show signs of severe freezing injury, especially on their naked ears and tails.

Opossums are born after a gestation period of 11-13 days. At birth, the litter of up to twenty embryonic-looking babies are smaller than honey bees. As soon as they are born, they attempt the short journey to their mother’s pouch, and there they must locate and latch onto one of her thirteen nipples if they are to survive. Many don’t survive, but those that do rarely live longer than two years in the wild. However, those two years are of great benefit to all of us, for they function as high-quality, tick vacuums.

Opossums are fastidious when it comes to grooming, and as they waddle through underbrush, woodlands, fields, gardens, and our yards, they accumulate a large collection of ticks. Those ticks are then scratched off and consumed.

The first frost of the season does not stop ticks. If the temperature returns to or remains above 35 degrees, ticks remain active outside and pets can bring those ticks indoors. A winter thaw can also increase tick activity as they search for warm blooded creatures to pass by and present a blood meal. The Michigan Department of Health and Human Services (MDHHS) has excellent details on preventing tick-borne illnesses and their website states:

“Ticks are closely related to insects and spiders, and there are over 20 known tick species in Michigan. Most often, they live out their lives feeding on wildlife, however people may be bitten when they work or recreate in areas where ticks live. Ticks are most often associated with natural areas such as grassy shorelines, wooded areas, or fields near wooded areas. Ticks are rarely encountered indoors unless brought inside on the clothing of people or on the body of a pet. Several species of ticks are known to bite people and pets, and may harbor dangerous bacteria, viruses, or parasites. Not all ticks carry diseases, but tick-borne diseases do occur in Michigan, and can be serious or fatal if not properly diagnosed and treated. Ticks have three life stages – larval, nymphal and adult. Ticks feed painlessly by attaching themselves to the skin with their piercing mouthparts. They can attach anywhere on the body, but are commonly found in the hairline, ears, waistline, armpit, and groin.”

Michigan has five tick species of special concern and will identify ticks at no charge for residents, click here to view how. The most commonly submitted tick is the American Dog Tick, also know as the Wood Tick, and it comprises 76% of all ticks in Michigan submitted for identification and testing. The Blacklegged Tick, also known as the Deer Tick, is the next at 15% and is a vector for several diseases, including Lyme disease. The Lone Star tick, with a submission rate of 5%, is rather rare in Michigan, but does best in wooded areas with high deer populations. The Woodchuck Tick, also referred to as a Groundhog Tick, comes in at 3%. Coming in last with a 1% submission rate, the Brown Dog Tick, also known as the Kennel Tick, is able to survive and breed in inside locations. MDHHS also has a detailed guide with photos of those five species that you can find here.

Opossums do not differentiate on which tick species to consume. They eat all species of ticks and it’s estimated that a single opossum consumes approximately 5,000 ticks a season. Although opossums work 365 days a year to kill ticks, some ticks still end up embedded into the flesh of humans, especially when we work in the outdoors or do brush cutting and leaf clean ups during autumn. Late season picnickers, hikers, and campers are not immune to being prey for ticks.

I had a tick experience two summers ago on South Manitou Island during my 40-day stay as a lighthouse keeper for Sleeping Bear Dunes National Lakeshore.

I awoke to an itch on my abdomen and found a tick firmly embedded in my flesh. After removal with my TickKey, I posed the dead Blacklegged Tick with that same removal “key” to capture a photo image and then sent a text message to a doctor back in Oakland County. I was prescribed a single 200 mg prophylactic dose of doxycycline, an antibiotic used to reduce the risk of acquiring Lyme disease from the bite of a high-risk tick, such as the Blacklegged Tick. The next morning, with the assistance of the national park staff, that doxycycline tablet was picked up at a pharmacy in the small town of Empire, driven north 30 miles to Leland Harbor, and ferried across the Manitou Passage on the Manitou Island Ferry to reach me at the lighthouse.

Later in the season, I used my TickKey again to remove a rather shiny Dog Tick attached to an island camper’s ear. I now keep that tick removal device in my grab-and-go outdoor exploration bag.

There are multiple suggestions on ways to remove a tick, however, you should never squeeze its abdomen or try to yank it out quickly. My personal preference for removal remains the TickKey. The TickKey website emphasizes a critical point:

“Applying any substances, such as petroleum jelly, fingernail polish remover, repellents, or a lighted match that upset or harm the tick almost always causes the tick to vomit the contents of its stomach back into the host.”

The CDC shows the older tweezer method of gently pulling it out, but grasping it close to the skin, not at the tick’s abdomen. My personal belief, a belief shared by many ER physicians that are wise in the ways of wilderness medicine innovations, is that the TickKey is more effective than tweezers.

One thing is certain and without debate whether you love opossums or not. Opossums have earned the title of nature’s premier sanitation engineers as they go quietly about their tick consuming task. They certainly deserve our respect, not our disdain. I look at opossums as welcome guests in the den a few dozen feet from my door on the wilder side of Oakland County.