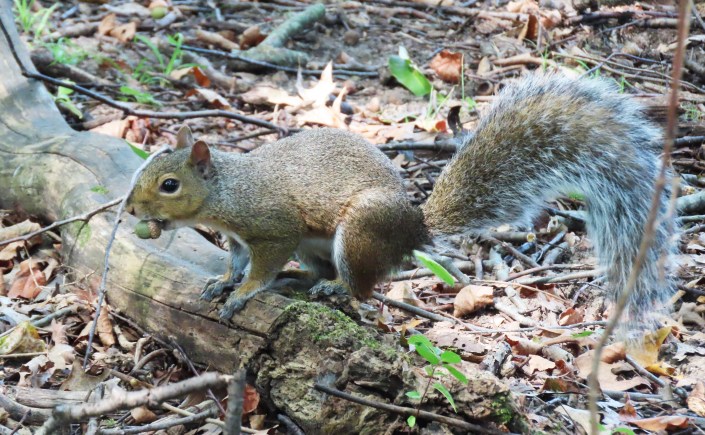 Every autumn we sense the excitement of the beginning of a new season. Autumn is the time for nature-embracing explorations into the natural world as nights cool, fantastic forest fungi appear, and mosquito-free trails beckon. I know the time of autumn draws near as energized Eastern gray squirrels gather acorns felled by strong winds. That time is now.

The autumnal equinox does not officially arrive until September 22, but if you walk slowly and silently, stop often, look, and listen, you too will feel the seasonal shift. Color change is well underway with poison sumac leaves rapidly transforming into a scarlet-red beauty of our wetlands. A word of caution: look, but don’t touch; it’s as potent as poison ivy.

Lakeshore trails are especially eye-catching in these middle days of September, especially in the dawn’s early light. They always beckon, regardless of the weather. Perhaps it’s the combined symphony of nature’s sounds that draws me in, or perhaps it’s just the anticipation of what I might see or hear. Either way, even when I hike alone I am never alone; nature’s surprises always await me.

I’m very pleased that a Great Horned Owl has taken up residence at the edge of my woods. Although I rarely see it, I have no trouble hearing his deep, soft hoots. He often perches on the top of a spruce tree and appears at dusk as a silhouette. I presume it’s a male, since an adult female’s call is noticeably higher in pitch than that of a male. Rabbits are abundant at the edge of the meadow near where the owls perch, creating an all-you-can-eat buffet.

Last week, shortly after sunrise while I was walking on a trail at Independence Oaks County Park, I was pleasantly surprised to see a Double-crested Cormorant perched on the edge of a dock on Crooked Lake. Cormorants are skilled fishing birds, and they know a good location when they see one. I watched a gentleman fishing from his kayak about 100 yards from the cormorant. If I had to guess who was successful making a catch first, I would lean to the cormorant. The fisherman needs to wait for a fish to come to his bait. Cormorants chase their prey underwater before seizing it with their hooked bill.

The very next day while hiking around that lake again, I was startled by something I have never witnessed before. Two green frogs were perched on the algae coated shell of a large dead snapping turtle. A few seconds of observation led to the reason why the frogs were there. Insects were attracted to the scent of decomposition, and that led to a fast flying food feast for the frogs.

Pileated Woodpeckers activity seems to have increased as summer waned, or perhaps it’s just that I am in their habitat more. Regardless, autumn is a perfect time to watch for these powerful woodpeckers. They are the largest woodpeckers in North America, and a species very much at home in Oakland County.

We sometimes turn to comfort food thoughts as the dawn of autumn approaches. One of my favorite comfort foods of nature’s way is a bright orange forest fungi with the catchy common name of Chicken of the Woods. It is alleged to have the taste and texture of chicken that gave it its name. I disagree with both the taste and texture being like chicken, but it is excellent when fried. It’s also an easily located forest fungus that grows attached to dead trees or fallen logs, and never emerges directly from the soil. A word of caution: not all orange colored fungi are edible, and some are poisonous.

Wetland and meadow wildflowers are reaching their peak potential as pollinators, and provide a late summer source of nectar and pollen for all sorts of insects. Joe-Pye weed is a native wetland species that averages four of five feet tall, and it reaches peak bloom about the same time as goldenrod. Both plants share one trait. They attract honeybees for their final gathering of nectar and pollen to prepare for their winter storage.

White-tailed deer are easily seen all year, but for reasons I do not know, they seem bolder now, and approach my house much more closely. One doe beds down near my beehive almost every night. She is very aware of my presence and will stand to watch me from about 150 feet away as I pay my evening visit to the hive. I jokingly look to her as the night guardian of the bees and at times wonder what she thinks of me, since I am sure she knows my meanderings far better than I know hers.

Gray tree frogs will be hopping off to hibernate under moist logs in another month or so, but it’s feasting time now for these arboreal frogs. I’ve been asked on a few occasions if they really climb trees, and the answer is a resounding yes. They even have the ability to cling to window panes and wait in ambush for flying insects attracted to home lights. If the evening is moist, I will almost always see one perched on top of the door frame near the porch light.

Purple Asters are not common in my meadow, however, when they do bloom, it’s always in the waning days of summer—a reminder that “to everything there is a season.” This year was no exception. These beauties that just now bloomed confirm the dawn of autumn on the wilder side of Oakland County has arrived.